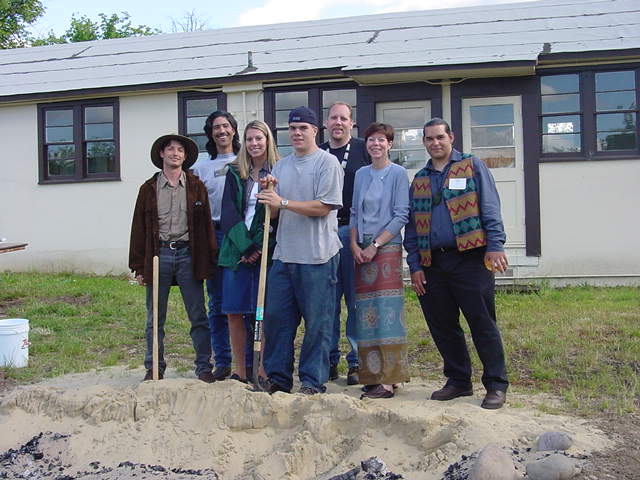 SWORP II Group of Coquille, Siletz, and Grand Ronde members and others in front of Original UO Longhouse 2001

The earliest history of Native people in the Eugene-Springfield area is that of the Kalapuya tribes from the area, Chifin, Winefelly,  Pee-u (Mohawk), and Chelamela tribes. These people signed a treaty with the United States in 1855, and were removed to temporary reservations in the Willamette valley. The Yoncalla, in the Umpqua valley, and in the Calapooia Mountains just south of Cottage Grove were removed to the Umpqua reservation after they signed the Kalapuya and Umpqua treaty in 1854. The tribes in the Eugene area of the Willamette Valley were taken to Spores farm to live for a year until they removed to the Grand Ronde Indian Reservation in 1856. Some of the Yoncalla, members of the Halo family, chose to remain living around Yoncalla, and Cottage Grove, Oregon.

Likely the earliest history, in  the settlement era, has Native people becoming farm-workers harvesting crops around Eugene. Native people would come to the Willamette Valley from reservations and work as migrant farm workers in a tradition that lasted for over 100 years, (1860’s-1960’s.) In this period the tribes would continue to gather and hold camp meetings in Cottage Grove, Pleasant Hill, Eugene, Salem, and other locations throughout the region in summer gatherings. These camp meetings involved tribal people from several reservations gathering at known sites for a week or more to talk history, to participate in the local economy and to be farm-workers for the local American agriculturalist farmers.

Migrant Native farm-workers was a cultural institution in the Willamette valley into the 1970’s. Native people from the reservations, like Grand Ronde, Siletz, Warm Springs and Klamath would come to the agriculturally rich valley and take temporary wage labor jobs to help tend to and bring in the crops. The valley attracted Native people from as far away as Arizona during the summers. They would harvest beans, berries, nuts and hops, the valley being one of the richest areas in the world for some of these crops. They would move, or migrate, to other fields based on what crops were ready for harvest. This practice for Natives was limited after 1954 when termination proceedings began in Oregon and the United States brought in Mexican farm laborers under the Bracero Program, a federal program that began in the 1940’s.

Beginning in the 1950’s (1954-1961), Klamath Reservation native peoples (Klamath, Modoc and Yahooskin band of Paiutes, as well as some southern Molala), were forced to relocate from their reservation in the Klamath Basin as part of their termination. Many Klamath people relocated to Eugene to find work or education, and remain today a large population in the native community. Termination generally caused people from the local reservations to move to the cities to find work and a place to live. Some families moved well before termination occurred to better prepare their families. Many people assimilated into the local communities. The cities of Portland, Salem, and Eugene garnering a large number of local native peoples even today.

Since the 1960’s, Native people from many tribes have been a big part of the community matrix in Eugene, Oregon. Termination caused the loss of much tribal culture, loss of identity and of familial relationships. Many people, the descendants of the tribes in the 1960’s saw what was happening, the loss of tribal languages, their people living in poverty, poor health and lack of access to society, and began devising ways to restore the tribes. They began gathering around educational organizations to help support their work on tribal issues. Many terminated Native peoples wanted their Native identities and rights to hunt and fish like in the old days, and began working toward these rights.

Termination did not address hunting and fishing rights and many people thought they had these rights still. Therein was borne a two decades long conflict generally labelled the Fishing wars, where tribal people sought to fish in the old ways, as nothing had be said about their rights to fish when the tribes were terminated. Some Native fishermen were arrested causing a series of trials between the states of Oregon and Washington and tribal fishermen. The outcome of these cases, not really felt until the 1980’s, was that tribes that had fishing rights had the rights to half the catch from local fish runs (Boldt 1974 and Belloni 1969 Decisions).

These fishing rights actions, the actions of other tribes toward Tribal restoration (Menominee 1972), the actions of the American Indian Movement (AIM) for tribal sovereignty, and actions for claiming land from abandoned federal properties (Alcatraz 1974), caused some tribes in Oregon to begin working towards they own restoration and sovereignty. More tribes in Oregon (63) than any other state had been terminated under Federal Indian Termination Policy, including all of the western Oregon tribes (Grand Ronde, Siletz, Cow Creek, Coquille, Coos, Lower Umpqua and Siuslaw and Klamath Reservation, and many people began working towards restoration in the 1970’s during this age of revitalization and empowerment.

In the 1960’s, the Native American Student Union  at the University of Oregon, was one of the first formed in the region. One of the earliest, and now oldest Pow wows on the West Coast is the University of Oregon Mother’s Day Pow wow (in 2016 in its 48th year, now recognized as a State heritage event in 2018). The Native students at UO organized to have a student union, to gain a building to hold gatherings, the Native American Longhouse, and organized to have representation and advocacy in the university administration. It is the most active and influential of Native organizations in Eugene today. The present Day Office of Multicultural Affairs, began as an Office of Native American Affairs (Assumed title). When other ethnic groups saw the benefit of this, they worked to have the University expand its advocacy scope broadly for all ethnic minorities. From this early Native Affairs office, began about 1969, was borne all of the OMA’s throughout the Oregon public university system.

In addition, Native students at the university, this first class of organizers, began working to help the tribes in the area become restored. Men like Bob Tom (Siletz, Grand Ronde) worked with their tribe to help them get restored while they completed their degrees and worked around the university. These tribal leaders would go on to aid with the Federal Task Force 10 proceedings to collect information about Terminated and Non-federally Recognized Indians in 1975. This committee met with local terminated tribes at the Armory in Salem to collect testimony. Their report was issued in 1976 stating that Termination had been an experiment gone bad, a mistake that was causing the decline of the tribes. This report and actions by a sequence of U.S. Presidents and the tribes for self determination for all tribes aided the tribes in western Oregon to become restored (1977-1989).

Other Native people in the community formed the backbone of Native advocacy and advising for generations of Native students to complete their education at the University, as well as with the local 4J school district. Native communities members like Twila Souers, Dwight Souers, Wilma Crowe and Marcy Middleton, Dean Middleton, served local efforts to promote education, to help students through their difficult trials, and working organizations like Celebrating Traditions (a non-profit) to offer cultural events and programming that would appeal to Native peoples.

Robert Proudfoot, in his time (1991-2006), offered structure to Native programs at the University of Oregon. He was the adviser to NASU and offered a steady sequence of International Studies classes which allowed Native students to research  and experience Indigenous studies. He offered experiences for Native students to network with other Native peoples and term travel to other countries (Vietnam, Australia, New Zealand) to experience other societies. He also arranged for Vietnamese students to study at the UO. He was the most inspirational and influential of all Native professors in UO history. Rob was the inspiration and firmest advocate behind the Many Nations Longhouse building project, which is his legacy in many ways.

One of the most important Tribal Projects at the UO was the Southwest Oregon Research Project (1995-2009), initiated by the Coquille Indian Nation and through several coordinators and/or directors; George Wasson (1995-1997), Jason Younker (1997-2001), Mark Tveskov (1997-1999) and David Lewis (1999-2009). This project involved Native researchers collecting ethnographic documents from the National Archives and National Anthropological Archives and establishing a collection at the UO within the Special Collections program of the library. Then on two occasions copies of these documents were given away to regional tribes in Potlatches. This project to create a library collection, from three individual field collection projects, was coordinated and organized and described by David G. Lewis (Grand Ronde, Anthropology), and is the most used collection in the Special Collections division of the library, and has materially helped the tribes of Oregon and northern California recover missing and lost histories and cultural information. Many of the researchers under the project have gone on to serve their tribes in various ways.

The progress seen for Native students and programs since the 1960’s is startling. There is now a Native American studies path through Ethnic Studies and some stable Native programs like NASU. Linguistics supports the Northwest Indian Languages Institute (NILI) with outreach to tribes for language studies. The Native American Advisory Board of tribal representatives serves to help approve programs at the UO for Native Affairs. NASU offers a regular culture night at the Longhouse on Thursday nights where the community gathers for good food, conversation, and crafts. Many of the advisers to the NASU program from the 1960’s and ’70’s remain advisers and and advocates and are part of the UO Native Alumni Association today.  The most recent project of NASU was the Nine Flags Project/Oregon Flagpole project (2014) where the nine Oregon tribal flags were  installed at the ERB Memorial Union, a companion to the Walk of Tribal Flags (2009) at the Oregon State Capital.

The present Native affairs development at UO corresponds well with Native artwork that was installed for the new I-5 bridge rebuild project, Wilamut Passage. Around the passage there are above deck and below deck art and history interpretation on every path inside the project area. In addition, there are now Plankhouses at private parks and Native culture inspired play areas at public parks in the area. Native place names are being brought back to the community beginning with Wilamut natural area in Alton Baker Park, and Wilamut Passage bridge of the I-5 freeway over the McKenzie River. The new Springfield Indian education Chifin Native Cultural Center is the latest development in the vein where programming in Native arts and cultures is offered. Chifin being an original place name for the Kalapuya People of the area. Finally in 2016 Native people in Eugene, including members of NASU, were successful in getting Eugene to relabel Columbia Day to Indigenous People’s Day. The original Indigenous Peoples Day for UO was sponsored by NASU and Mecha (Mexican-Chicano Association) in 1997.