The Luckimiute (Luckimauke) Indians occupied an area from roughly the town of Rickreall south to Corvallis, on the west side of the Willamette River. They principally occupied the Luckimiute river and tributaries.

The best records are those of Jesse Applegate’s “Recollections of My Boyhood” book. Applegate arrived in 1844 as a young boy with his family and first settled in Salt Creek just west of Rickreall. The Applegate house still stands at Salt Creek.

“the native population in our neighborhood was a tribe of the Kalapooya and near and far, even to the sea, were the Tillamook, Tawalatin, Chemeketa and the Luckyuke Tilikum, all seeming to be one tribe and speaking the same languages. They were a degenerate and priest-ridden people, but their language was remarkably smooth and musical.” (68)

Applegate’s book is literally memories of his childhood. Some memories, like that experiencing the firing of the land by the Indians are unforgettable,

“It was a custom of their Indians, late in the autumn, after the wild wheat, Lamoro Sappolil, was fairly ripe, to burn off the whole country. The grass would burn away and leave the Sappolil standing, with the pods well dried and bursting. Then the squaws, both young and old, would go with their baskets and bats and gather in the grain. The lamoro sappolil we now know as tar-weed. It is probable we did not yet know that the Indians were wont to baptize the whole country with fire at the close of every summer; but very soon we were to learn our first lesson. This season the fire was started somewhere on the south Yamhill, and same sweeping up through Salt Creek gap. The sea breeze being quite strong that evening, the flames leaped over the creek and came down upon us like an army with banners. All our skill and perseverance were required to save our camp. The flames swept by on both sides of the grove; then quickly closing ranks, made a clean sweep of all the country south and east of us. As the shade of night deepened, long lines of flame and smoke could be seen retreating before the breeze across the hills and valleys. The Indians continued to burn the grass every season, until the country was somewhat settled up and the whites prevent them; but every fall, for a number of years, we were treated to the same grand display of fireworks. On dark nights the sheets of flame and tongues of fire and lurid clouds of smoke made a picture both awful and sublime.” (68)

The practice of anthropologenic fire is the most efficient method for managing the land in the valley. The Kalapuyans, at this time did not have mowers to control the overgrowth of vegetation. In Oregon we have enough rain and sun and mild climate that plants grow very well. Therefore periodically the Tribes needs to set fire to the land to manage the overgrowth otherwise it would have become and impassible jungle. In addition, there were secondary benefits of firing the land. Pest populations would be well controlled, extras fuels of dead plant remains would be destroyed, and the valley would be rejuvenated with new growth to attract deer and elk down from the hills, and to promote better acorn crops from the oaks. Some of the reeds and bushes used for weaving would be greatly helped by fire, as they would grow back better the next year. And finally the gathering of roasted wild grains would be a welcome addition to stews, soups and possibly flat breads.

Today’s land managers are beginning to think about and adopt the Native philosophy of setting anthropologenic fires because fire-suppression over the past 100+ years is now causing massive out-of-control fires in the region due to excess build up of dead debris in the regions vast forests. Witness the last few years of fires in the west in Oregon, California, Washington, and Colorado, and now in Canada, and we can see the effects of fire suppression.

The Luckimiute signed a treaty with the federal government in 1851. This treaty, like all those of this year was not ratified. Their proposed reservation was near the Luckimiute river.

Joel Palmer negotiated a treaty with all of the Chiefs of the Willamette Valley in January 1855. This treaty confederated all of the tribes together and began the process of removal to the permanent reservation. The Luckimiute signatories to the treaty are

The signature page lists the names with their titles, Dabo, or Jim, first chief; Sco-la-quit, or John, second chief; Yah-kow, or Kompetine, third chief. Kompetine the third chief, is likely the same Competine mentioned in the following agreement for the temporary reservation.

We Isaac Zumwalt and Rice W. Simpson of Polk County Oregon Territory, agree to permit the Luckimauke Band of Calapooia Indians to reside upon, enclose and cultivate the portions of our respective land claims contained in the limits herein named for the Period of four years, or until said Indians are removed in accordance with treaty stipulations within the period herein named. Beginning on the bank of the Luckimute River where the line between the said Zumwalt & Simpson crosses said river; thence along the bank of said river in a westerly direction to a point from which a line running South East will include the house occupied by Competine an Indian in his life time; thence South East fifty rods; thence East to Simpson’s fence; thence along said fence and in the same direction to the river; thence on the river to the place of beginning containing about twenty five acres. In testimony where of the hereunto set our names this 14th day of March 1855, Isaac Zumwalt, Rice W. Simpson, witness Edward R. Geary

This area aligns well with the present area between Pedee and Monmouth. The area also matches well with the area of the proposed reservation of 1851 (note location of Simpson’s Ferry on both maps). Note the location of the historic road and the pass between the higher hills and the Luckimiute River. The Luckimiute river is very active and floods every few years and so the meander has changed and is very different today in comparison with the river in the 1854 GLO map. Note the tight turn to the west the river takes as it carves close to the hill by the Seabrin house is very like that on today’s Google map image.

2016 Google map image of the assumed location of the 1855 reservation.

Larger view of the location of the Luckimiute Reservation in relation to Pedee and Monmouth. 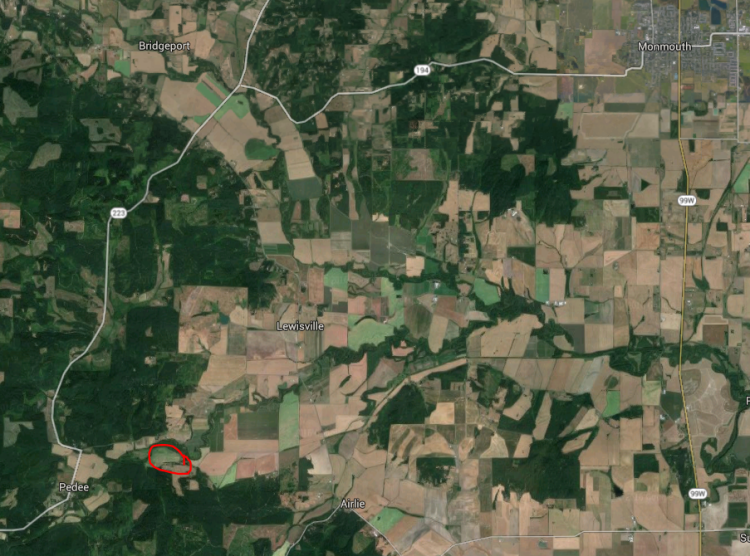 John, the principal chief, is listed at the Grand Ronde Indian Reservation in 1856 in the census. They have 10 men, 7 women, 3 boys and 2 girls, a total of 22 people in the tribe 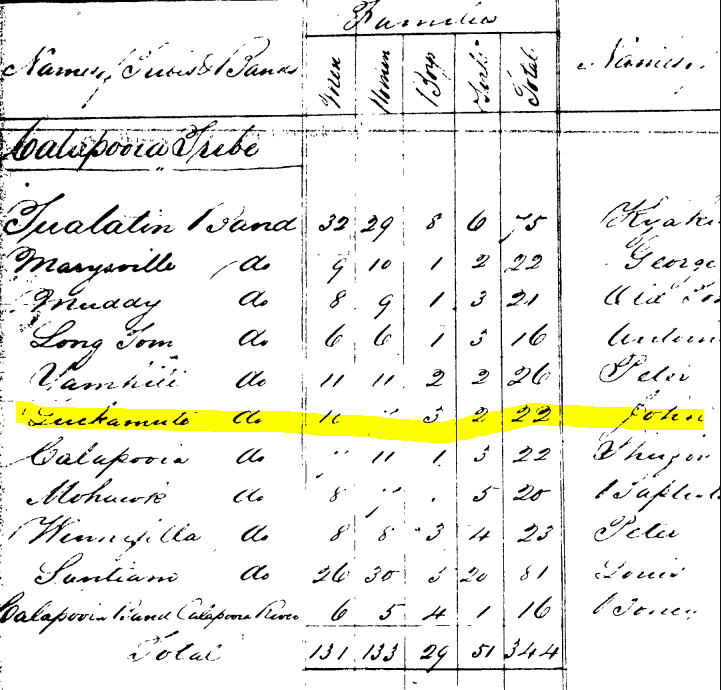 The tribes arrived at Grand Ronde between February and March 1856. Life on the reservation was very difficult. The first winter they only had canvas tents, and in the spring and summer were made to build their own cabins. Food was also in short supply and the tribes had to hunt and fish in the are to get enough food. The American government was slow to send money or food to the Indian Agents, and many Indian people took ill and died in the first few years. The majority if deaths appeared to be caused by Influenza (Flu) and complications from secondary illnesses  like pneumonia. A hospital had to be build at the reservation to attend to the nearly 2000 Indians, of which over 600 or over 30% were sick in September 1856. The attrition of the tribal population in this period, due to disease and starvation was seen as a necessary evil and planned for by some officials so that the federal government could save money on food and supplies.

Descendants of the Luckimiute remained a part of the Grand Ronde Indian reservation until the reservation was terminated in 1954. Many descendants are presumed to still be members of the restored tribe today.