On March 26, 1856, a year after the Willamette Valley treaty is negotiated (Jan. 22, 1855) there is an uprising on the Columbia near the Cascades. There are numerous versions of the story,  but it is associated  as an extension of the Yakima Indian Wars, where  Klickitat and Yakima and perhaps some Cascades Indians were upset with the Americans and killed some of them in a series of attacks on settlements and outposts on the Columbia River. The Yakima leader Kamiakin was upset about the invasion of his country and wanted to drive the Americans from the Columbia. The Klickitats were upset because they had not gotten a treaty for their lands, and many of the Klickitats felt that their recent occupation of the Columbia and apparent conquest of the the Willamette Valley meant they deserved a treaty. 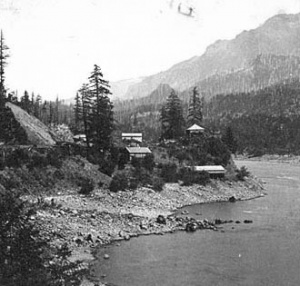 This situation was created after epidemics wiped out a good portion of the Indians in the region. From 1829 to the mid-1840s numerous epidemics, mainly malaria, served to depopulate many areas, leaving room for other tribes and settlers to move in and begin claiming village sites for their own. The Chinook tribes though, maintained at the treaty negotiations that they owned the whole of the Columbia, and they were agreed with by the Americans. Sometime later, Klickitats tried to sue for land rights in Oregon, but their lawsuit failed and the Indian agents forced them back into Washington Territory.

The most dramatic event was the capture and hanging of the Cascade leaders at the Cascades, the first such in the region.  After the Cascades attack and their repulsion by the army, the Klickitats and Yakima Indians went back north and some of the Yakimas even went into British Columbia to escape the Americans. The Cascades were left to take the fall for the actions of many, and some say that they were not involved at all. The trial of the Cascade leaders consisted of checking to see if the guns had been fired recently. Lieutenant Philip Sheridan was responsible for bringing the Cascades to their trial, and later became the commander in charge of the Grand Ronde Agency Blockhouse.

The history of removal to White Salmon and Yakima is incorrect for most of the tribe. What occurred instead is an anomaly in Indian history. Most of the Cascades were left where they lived as they were determined to be peaceful. Their leadership removed, the federal government went about changing the boundaries of the various areas of Indian administration. Isaac Stevens was appointed the Indian superintendent of eastern Washington. There were also superintendents for western Oregon and for the area east of the Cascades. The dividing lines were the crest of the Cascades and the Columbia River. Those Cascades at Dog River, now called Hood river, were a separate tribe and many of them eventually removed to Warm Springs. The Chief at the time did not like the Wasco people and did not want to move to Warm Springs, but many eventually did. The Cascades on the north bank was in Washington Territory and Isaac Stevens and the Army ordered them to remain as they were peaceful.

The Cascades at the rapids, now Cascade Locks have their own unique history. Those Cascades were on the southeastern bank of the Columbia and were in the western Oregon superintendency. Between January and March 1856 Palmer was ordering the tribes to remove to Grand Ronde. The order for the Cascades to remove came a few days after the battle took place. There is as yet no record of that journey. It is possible the some of the Cascades remained living on the Columbia and Some removed to Grand Ronde. Palmer’s journal entries for March 1856 suggest he was operating between the Dalles and Vancouver and was ordering the tribes to remove them. One entry states “ordered the local tribes to the reservation”.   One family has now been found to have come to Grand Ronde in the early period. That family lost a son at Willamette Falls, he drowned fishing. His father comes from Grand Ronde and asks for help to bury his son from the chief at the Cascades. It is unclear in the record who this man was at this time and it is likely the families of the Cascades were censused under the Clackamas tribes. The Tribal census for 1872 lists Susan Tamolcha and family at Grand Ronde. Members of the Cascades tribe have said this is the wife of Chief Tumulth. In the Grand Ronde Passbook Oregon City John travels off the reservation with a “Susan” who is an older woman,  several times. 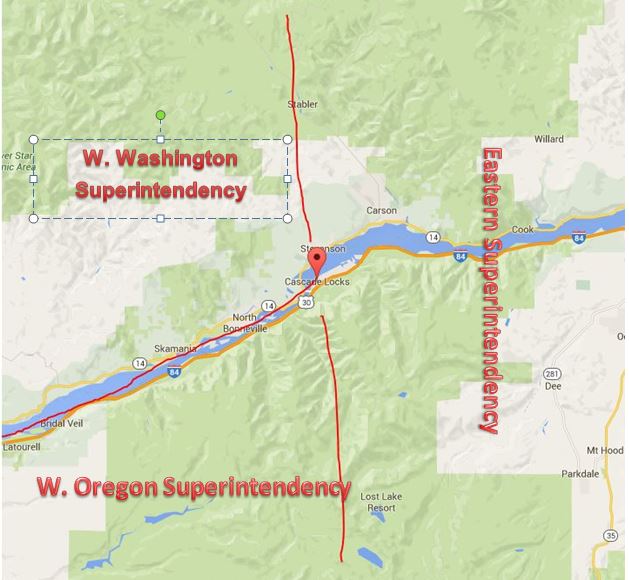 The Army at this time was more concerned with fighting eastern Washington and eastern Oregon tribes and did not have the manpower to move the tribes. A few Cascades were able to gain allotments at Yakima and some of them married the upriver tribes and integrated with the Wasco and Wishram peoples. But it appears that the Cascades remained in their original territory unless they married into a tribe on a reservation. The census records of the reservation at this time do not always list names or tribal designation (at least 27-48 tribes moved to Grand Ronde) so it difficult to find people of some tribes on the reservation.

Most of the tribal nations were much like city-states.  Villages and bands had their own sovereignty, and some groups of villages or bands were part of a larger tribe. And due to marriage laws in the tribes, people of high rank were forced to marry outside of their tribe and family. So there were many interrelations between all of the tribes in the region. Chief Concomly himself married his daughters and sisters to many other tribal chiefs and fur traders in the area helping him create good relations among all of the tribes and thus making him very rich. One of his daughters was married to Chief Keasno of the Multnomah. After Concomly, Keasno was probably the most powerful chief on the Columbia from the Pacific to the Cascades. He died in 1848 and a surviving wife, Mary Ann Keasno, was brought to the Grand Ronde Reservation with several of her attendants (slaves) in 1856. We know that Chief Keasno had relatives among the Cascades. Alexander Henry’s journal reveals Keasno’s deep relations in 1812 when Keasno participated in negotiation for peace at the Cascades.  Afterward, he has a gathering with his family, who were the Cascades, on the north bank.

The Cascades were well-positioned to capture the trade between the upper river tribes and the lower river tribes. Lewis and Clark’s journals reveal that there were many traders from other tribes in the villages they stopped at. So relationships and political kinships were extremely important to the Chinookan tribes. This helped to keep all of the Chinook tribes in possession of the Columbia River. They fought off those tribes that coveted their great wealth until they were overwhelmed by American settlements. many assimilated into the Columbia river community and others went to reservations.

The events of the battle of the Cascades in March of 1856 precluded the government from removing them. It is unclear if they were ever paid for their lands, or that they ever got the services and support promised to them by the government when they ceded their lands by signing the treaty of January 22, 1855, which was ratified March 3, 1856.