The Most Persistent Attempt to Exterminate the Tribes, Beginning with the Yontocket Massacre 1853

As related in my previous essay about the Chetko Massacre, there was a massacre of the Tolowa in 1853. The Palmer account suggest the previous massacre was the work of the same 8 or 9 men who destroyed the two Chetko villages in March of 1853. Annette Reed, a Tolowa descendant (Tolowa Dee-ni Nation),  and Professor of Ethnic Studies at Sacramento State University, suggests that the way in which the history was written is suspicious. The pioneer account from the History of Del Norte County (Bledsoe), suggests that it was the Tolowa’s own fault that the massacre happened.

In the Spring of 1853 a man called California Jack accompanied by several others, started from Crescent City on a prospecting tour intending to visit some place near Smith’s River. A short time afterwards an Indian was seen in town carrying a revolver with the name “California Jack”, engraved  upon it. Surmising that the prospectors had been murdered by Indians, a party of citizens attacked the Indians on Battery Point, near Town, killing the one who had the pistol and several others. a Company was immediately organized to search for the supposed murdered men. The camp of the prospectors on the banks of Smith’s River was easily found, and further search resulted in the discovery of the bodies of the men, all bearing marks of violence by the Indians.

After the punishment of the Indians at Battery Point, a large number of the survivors removed to a rancheria near the mouth of Smith’s River, known as Yontocket Ranch. But the feeling in Crescent City against them was too intense to subside without a further punishment being administered. A company was formed, and procuring a guide who had some knowledge of the country, near the ranch, prepared for the attack on the Indians. Of the manner in which the attack was made, no authentic information can now be obtained. It is well known however, that the fight ended in a disastrous defeat to the savages, a large number being killed, while the whites escaped with little or no loss. (Reed, 58-59)

A ranch is a Native village, a name devised in Spanish California originally as Rancheria, but shorted to ranch. Bledsoe clearly hedges his narrative suggesting that the whites “escaped” this massacre. Histories like this appeared throughout the west, most of which took the settler side, glorified the actions of their brethren, sometimes beatifying their direct ancestors, and ignored the most salient parts of their extremely racist and genocidal acts, painting the settler militia as somehow the victims of a massacre of their own making.

“Pyuwa of Enchwo [a Tolowa Village], who lived to be a very old man, one of very few … survivors… People were gathered for Needash (World Renewal) after fall harvest, at the center of the world at Yontocket. Indians from all over gathered to celebrate creation and give thanks to the creator. On the third night of the ten night dance, whites came into the village in the early morning hours. They torched the redwood plank houses, and as the Indians attempted to escape through the round holes in the houses, the militia killed them. This village existed as the largest native settlement consisting of over thirty houses. The whites would cut off the heads of the Indians and throw them into the fire. They lined their horses on the slough and as the Indians sought refuge, they were gunned down. One young Indian man ran out of the house with a “big elk hide” over his body, fought, and escaped to the slough. He stayed down there two or three hours: “All quiet down, and I could hear them people talking and laughing, I looked in the water, and the water was just red with blood, with people floating all over.” “The flames of our burning homes reached higher as even our babies were thrown to their deaths.” The center of the world, Yontocket, burned for days and that’s how the place received the name “Burnt Ranch.” Roughly five hundred Indians died in this massacre (Reed 59-61 compilation).

The Needash is the Tolowa world renewal or feather dance, which happens twice a year. Yontocket was the location the canoes landed when the tribe arrived on this coast and a village on the south side of Smith River. It was common for all of the Athapaskan tribes in the area (Tututni, Tolowa, Chetko, Pistol River, and some Rogue river tribes) to attend the Center of the Tolowa World at each solstice. This massacre then is likely the Summer Needash at the Summer solstice in Summer 1853. 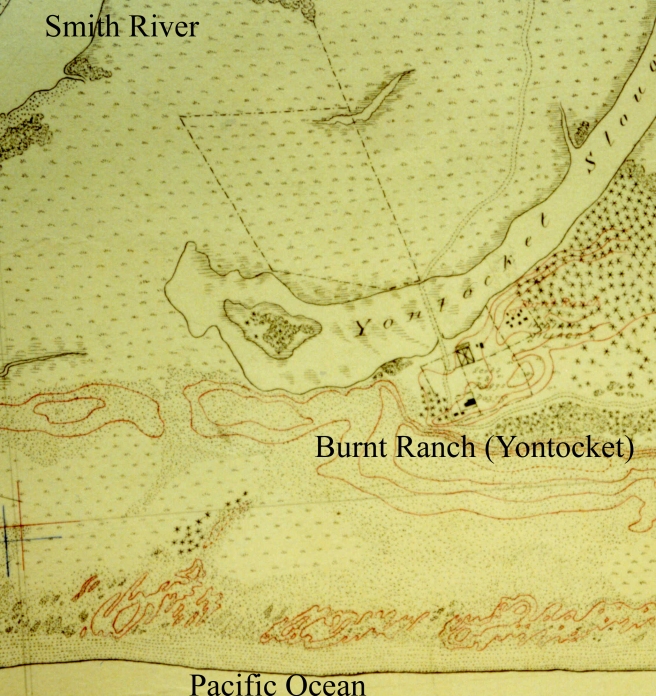 Yontocket is at the location of the light red script above the 1870s dairy farm, it states Burnt Ranch Indian Village.

Palmer is writing his report in May of 1854 from his travels in the fall of 1853 and so the original Yontocket Massacre most likely occurred in the summer of 1853. Palmer was a federal official, in fact Oregon Indian superintendent and was meticulous about his reports and his travel journals. Bledsoe’s account suggests Spring of 1853 for the Battery Point attack and so the next large Tolowa ceremony would likely be the summer solstice Needash of 1853.

the Tolowas moved to Stundossun after the 2 Howonquet attacks for greater safety, the island eroded away in the early 20th century

The Yontocket massacre destroyed the cultural center of the Tolowa peoples. Those of the renamed Burnt Ranch, moved to the village of Howonquet on the north side of Smith’s river. Massacres on the Tolowa continued for some years (see the Tolowa Chronology), as they were continually caught at their Needash ceremonies in the houses. It is these massacres that heavily contributed to the unrest in the region which resulted in the Rogue River Indian war. In fact, many Tolowas were imprisoned at Battery Point in 1855 to keep them from joining with Chief John’s confederacy, and it is likely they would have, considering this history. 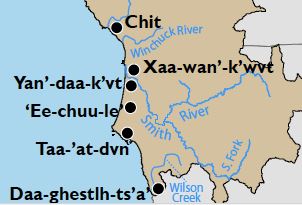 Tolowa Deeni Nation map (section) showing locations of the Chetko village of Chit, and the next southern village is Howonquet, then Yontocket, then Echulet, and two other Tolowa principal villages. The language is SW OR, N. Cal Athapaskan Tolowa Deeni

The numbers for this account are staggering (500), perhaps making this the largest known massacre of Native peoples in the history of the United States. Added to this are the successive totals of Chetko (24), and the successive Tolowa massacres, and the implications are staggering with at least 902 killed in 7 years.  This may be the most persistent attempt by Americans to exterminate any tribe in US history, and there is no indication that anyone of the Whitemen were held accountable. 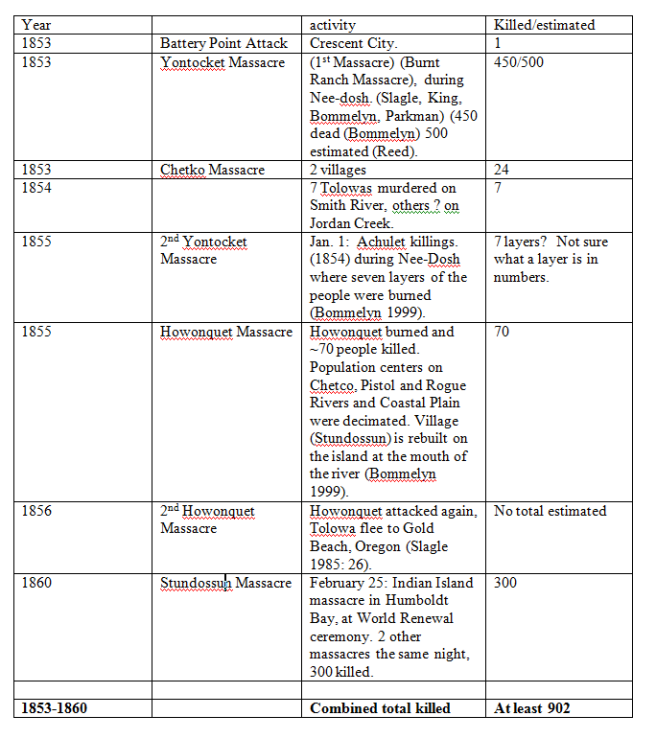