Bison of the Western Rockies

For years, I have stated that the tribes did not have bison in Oregon, so they would not have made tipis. This is why the tribes have plankhouses and longhouses made from woven mats. Tipis require a large animal to cover the tipi with their hides. This has made sense to most people. We did have structures among some tribes that looked like a tipi, the Molala for one had a tipi-like mobile living structure that was covered instead in woven mats.

But, while bison are not known for the past few centuries west of the Rockies, there has been much evidence uncovered by archaeologists that many areas in the west did have herds of bison and they were hunted by the tribes. The bison range was quite vast, and it is well known that there remain pockets of woodland bison in some wildernesses in the eastern US and in Canada.

We know there were bison in Idaho because their remains have been found in cultural sites, and there has been found at least one buffalo drop, where the animals would be driven off a cliff and then killed and processed in mass numbers at the bottom of the cliff. So this is circumstantial evidence that perhaps the last of the western bison were killed off in the 19th century. Scholars have tried to address why they went extinct in the western side of the Rockies, relatively suddenly.

In addition, the Charles Wilkes expedition produced a map after their exploration of the Oregon Territory in 1841. Their map lists “Buffalo County” on the Snake River near Fort Hall, clearly west of the Rockies.

Its unlikely there was one cause, so for these combination of reasons, the western Bison went extinct in the early 19th century. It very well may be the Bison, Elk, and Moose are the last remaining ancestors of what we call the megafauna, which died out some 12,000-10,000 years ago, and climate change was similarly having an effect on bison.  Native people got very efficient hunting the animals and reportedly easily killed as many as 1000 a day without firearms using horses. American Bison running video 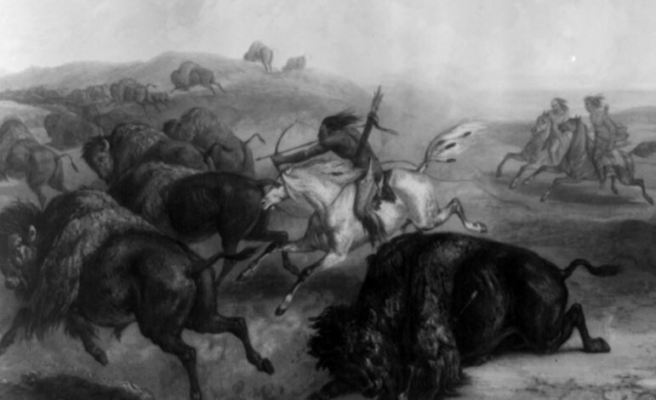 In fact there are indications that the rate of hunting the bison of the Plains by the tribes using firearms and horses in the 19th century was out-competing the propagation rate of the bison. For the western Bison, archaeologists have suggested that the Natives were similarly over-hunting the bison in the west, well before the introduction of firearms or even the horse.

The advancement which nearly made the American Bison extinct was the railroad. In the 1860’s and 1870’s there was a big push to cross the continent with railroads, to connect both sides of the nation by colonizing Americans. Bison were seen to be in the way of this progress. Their herds were at their height some 50 million across the Plains, perhaps the most of any large animal, which would have deterred or endangered train travel. So in the 1870’s Americans would line up on the trains and kill the bison herds mercilessly by the thousands with rifles. It must have been a bloodbath. 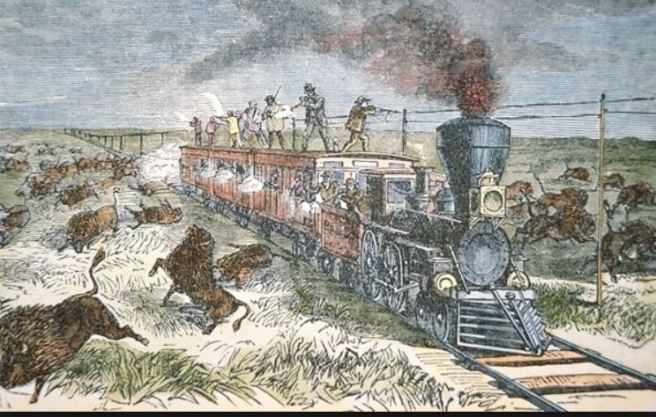 The meat of the animals was all wasted, what was taken was mainly the skulls and hides. These would be returned to places like Denver and Chicago and processed into useful products, coats, bags, and fertilizer. This intentional over-hunting was meant to destroy the herds who could cause trouble with trains, hence the need for cattle guards. But also, there was an intentional attempt to destroy the food sources of the Plains peoples, in order to make them more docile and compliant to colonization and removal, perhaps a form of total war. 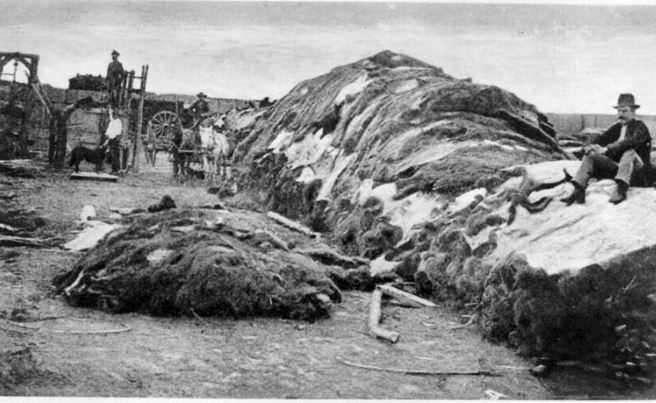 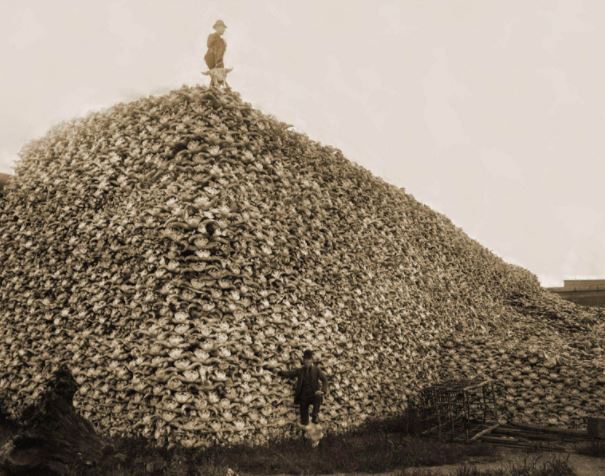 These western bison that went extinct, were likely hunted by the Nez Perce, Cayuse and Palouse, and Paiute peoples. As early at 1700 horses were traded up from the Spanish areas of the southwest and the tribes very quickly developed their own breeds of houses, the Appaloosa, and the Cayuse. These horses were bred for hardiness, speed and finesse, so that a mounted bowman could easily fire arrows from horseback and hit their target. These tribes, along with the Umatillas and others became some of the best horsemen of all time. Their chiefs and headmen would have herds of horses, in the thousands.

Generally, it is agreed there were no bison west of the Cascades during the time of colonization. However,  I have found references to bison hides being traded to Coos people on the Oregon Coast by the Kalapuyans in the J.P. Harrington notes. 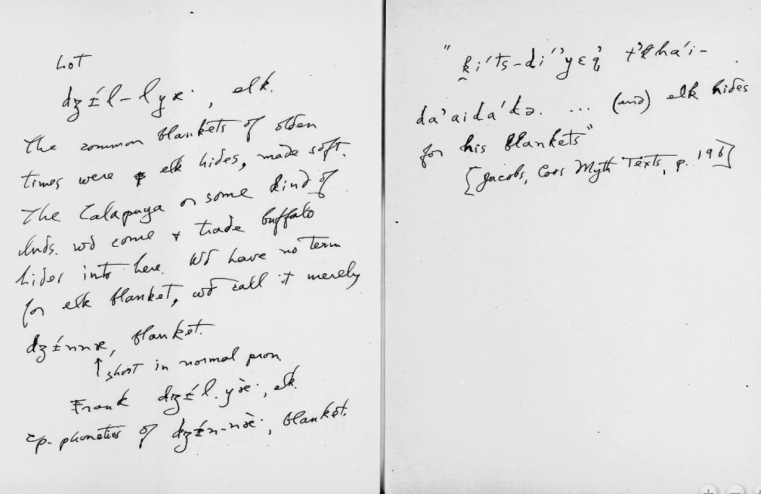 “Lottie Evanoff- The Calapuya or some kind of Inds. wd come & trade buffalo hides into here. “

When I found these two references to bison hide trade in Coos Bay, I was immediately confused, how is this possible if we did not have bison in Oregon? The solution is in the Columbia River Trade network. Its quite possible that Nez Perces and other tribes, were bringing bison hides over the Rockies to trade on the Columbia and Snake rivers. The Columbia River Trade Network had thousands of tribes trading salmon, dentalium, shell products, basketry, woven mats, canoes, camas, wapato, elk hide armor, and bison hides as well. It is quite possible that Kalapuyans were the middle men trading products from Willamette Falls, or even from the Klamath who visited the Willamette Valley in the summers, to the coastal tribes. Reportedly, the Kalapuyans liked the shells of the coast for jewelry.

As well, the story from the Coos people may be a memory of a previous time when bison trade in the region was more common, when bison yet lived in the west. The extinction of the bison in the west forced the Nez Perces and others to go to the Plains to find bison. That trek to the Plains from the Wallowas, seems extreme without horses. With horses, it would only be a few weeks at the most.

In light of this information about bison, I wonder if it can be fairly said that the tribes are all Salmon people, the Salmon is the staple of the tribes of the Columbia River, or are they more appropriately traditionally salmon and bison people.

The loss of bison in the western side of the Rockies, then, is a early anthropologenic effect of the Euroamerican colonization of this land. with new introduced technology in firearms, introduction of the horse, the likelihood that disease was a factor, suggests that a middle ground within the theory,  a combination of these factors, caused the western bison to go extinct. Diseases have been proven a major factor for the dramatic loss of tribal populations, it needs to be considered seriously in regards to the bison too. As well we cannot discount climactic changes having an effect on the western woodland herds.