On August 3, 2015 I took a trip to visit Canemah Natural Park in the Canemah Historic Neighborhood. The area is part of Oregon City.

I was interested to see how the park was shaping up. Two years ago I was involved in helping design at least two of the interpretive signs with the team from METRO for this new park that overlooks Willamette Falls.

I also participating in the opening event. The park has two sections, Canemah Neighborhood Children’s Park and Canemah Natural Area. The natural park  is owned and managed by METRO while the children’s park is owned by Oregon City.

The Children’s park has play structures and a basketball court. The new lawn is patchy grass, and there are several picnic tables and a restroom area. A path circles the park. At the southern edge of the green grass begin the natural area.

The area is first a dry grassland rimmed with Oregon oaks. There are some views of the Willamette River and several large boulders in the middle. The grasslands have been mowed presumably to keep down fire danger, but this eliminates the natural character of the park in this area.

Following the trail there are several low rises in the path and people have created several well traveled branches that approach the cliff edge which overlooks the river. There are warning signs to try to keep people on the paths, but these appear unsuccessful.

Following the paths this day I found rare litter, and picked up a few beer bottles, one coffee cup discard, and one tin can. There was evidence that people were regularly going off trail and perhaps partying in areas of the park. I found cigarette butts and even a remainder of some fireworks on the trails.

The trail is easy walking could be called gently rolling, through small clearing and forested areas.

The tree diversity is very good with oaks dominant in the clearings, and Big-leaf Maple, Manzanita and pine predominant.

I noted that there was a lot of native blackberry as well as some Himalayan Blackberry, but the native variety was more common here.

A few areas of wild berries, but a huge area of ferns, that were in the deepest pine forest. They were so plentiful they looked like an army of advancing spider-ferns.

I found a woodpecker tree. These are rotting trees that the woodpeckers peck away at to find grubs and other insects. All up and down the tree, of which the top was broken off some 25 feet up, there were small and large holes.

The first main path ended at the Canemah Historic Pioneer Cemetery which is fenced off. 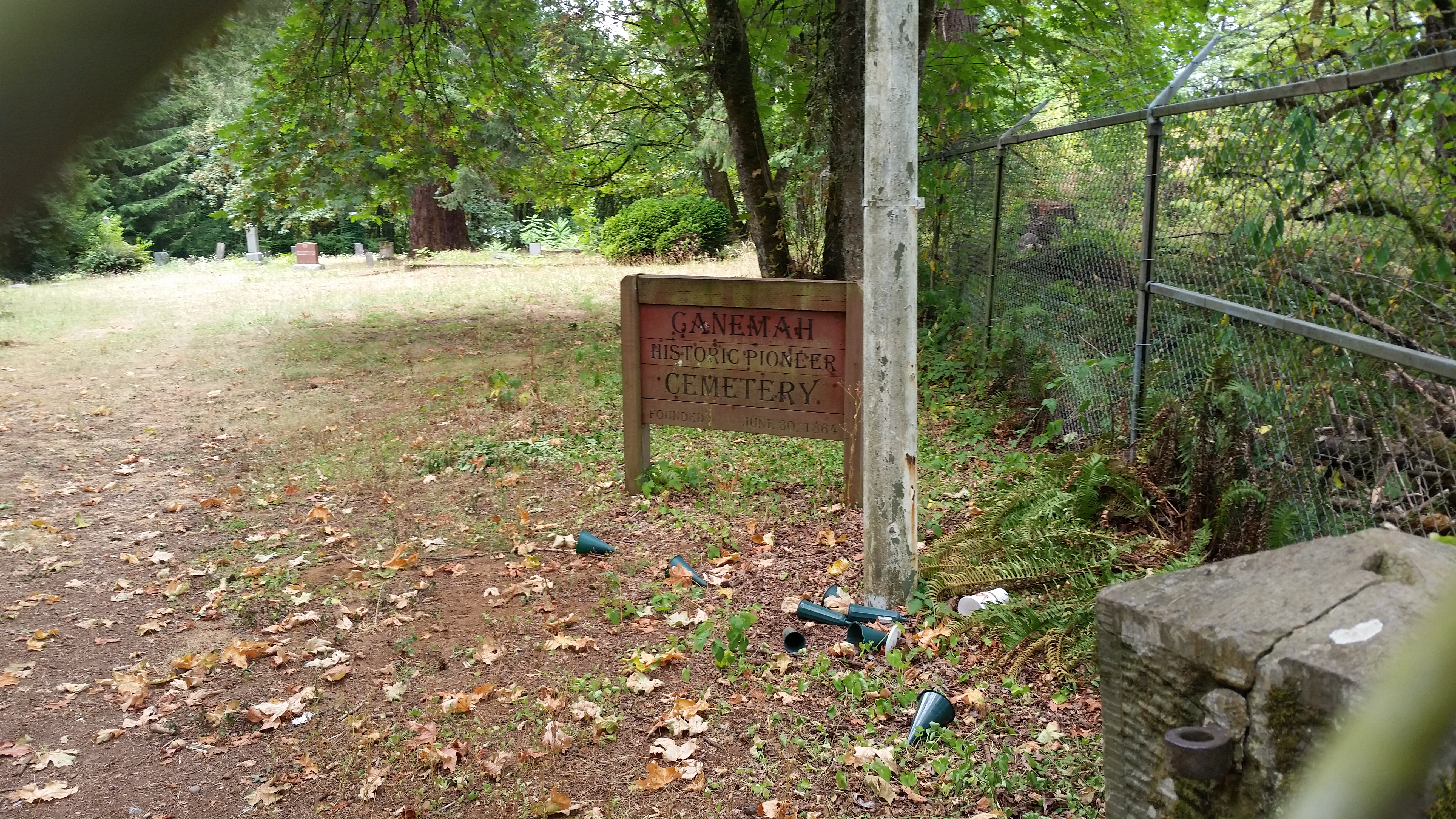 The second path advanced upwards into a deeper forest. The areas along the paths were lined with suspicious three leaf arrays of poison oak like plants. Some were small and reddish and some larger plants were deep green with a nice attractive shiny to the leaves. I avoided these areas.

I walked about a half mile each way and was amazed at the diversity of natural landscapes in the park. There are some invasives but they are not taking over, the natural vegetation seem to be doing well. As the path began arching downwards, I turned back. The whole route, I have heard is about a two mile walk.

One area I liked a lot was a very picturesque landscape of large rocky boulders and a diversity of trees with varied elevations and lots of color. 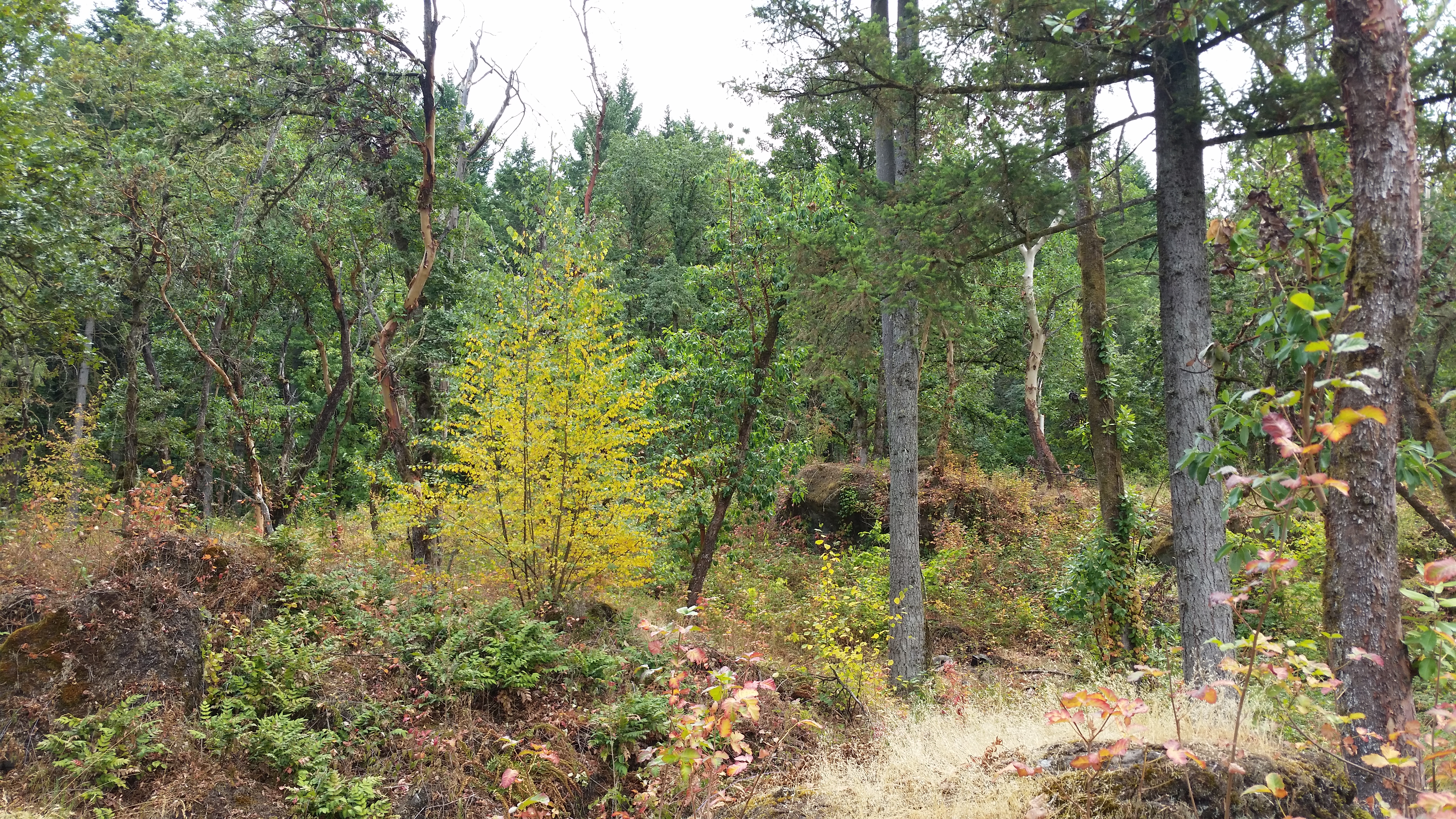 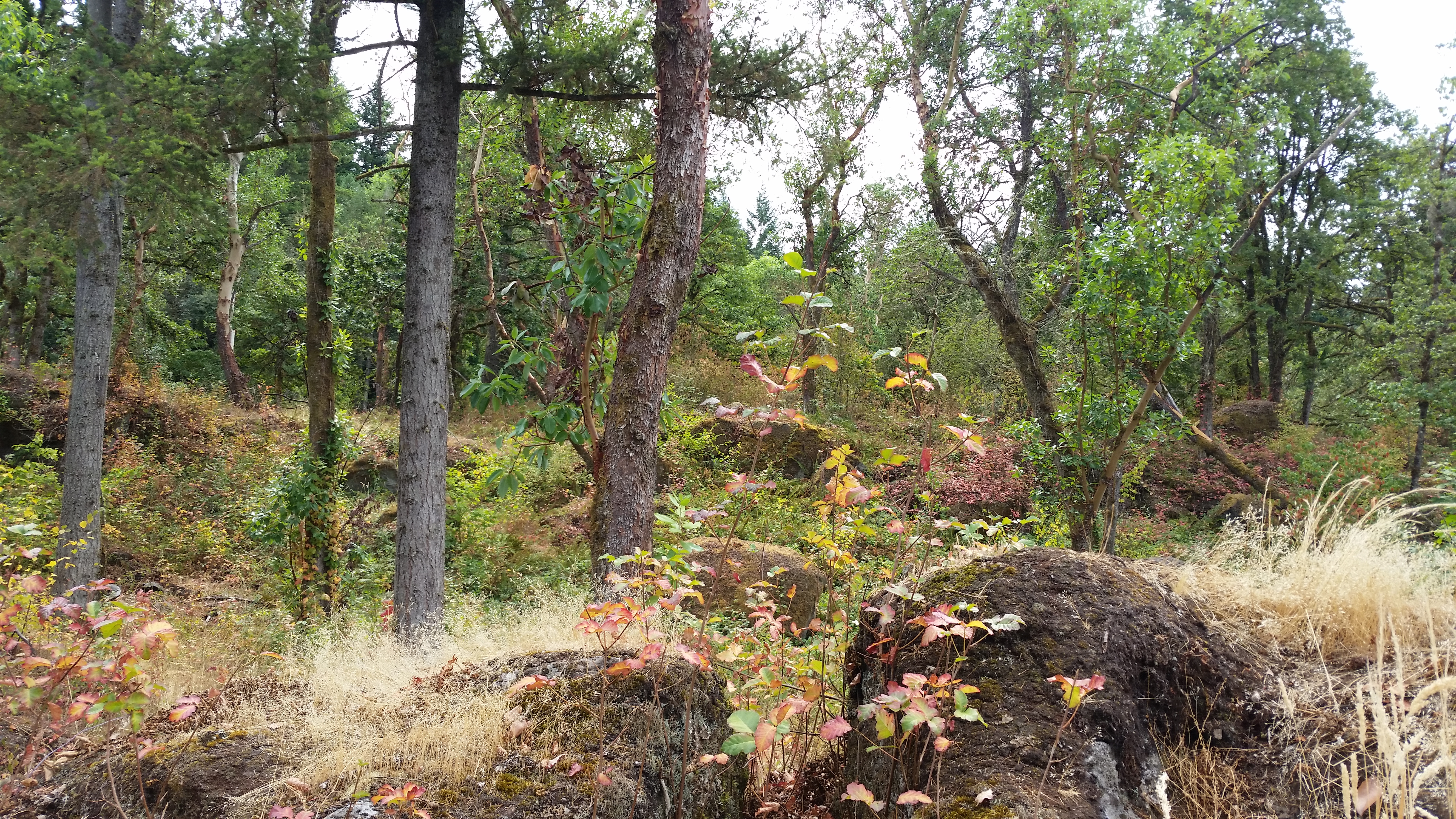 Leaving the park I drove down into the Historic Neighborhood and encountered their street sign. For some reason the sign is about 7 feet above the ground. I figure its for people in tall vehicles to read. 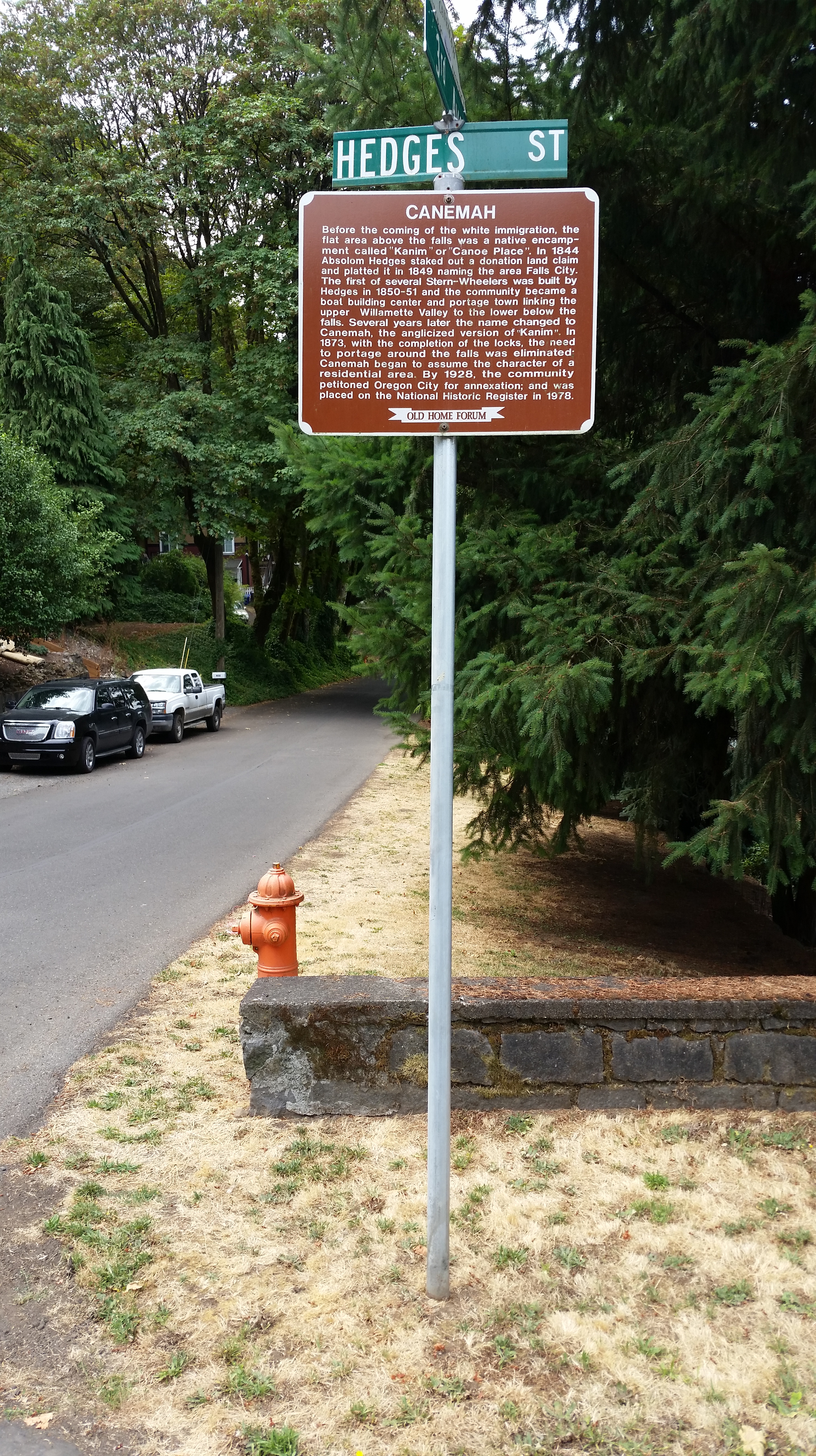 The neighborhood is very picturesque and some of the street names are of the original tribal people who lived in the native village of Canemah in the 1850s. As I wrote in 2013, the village was situated above the falls and the native people would have served as portage laborers, helping transport goods around the falls. The word “Canemah” that is present on the 1850s GLO maps is likely a version of the Chinuk wawa word “Kanim,” meaning canoe.

The park is truly amazing. Its remarkable that this diverse natural landscape has survived all these years in one of the earliest colonized areas of Oregon.