All this Salmon river research has led me to the Oregon State Archives. There they have the records of the Oregon State Highway Commission. Commission records go back to about 1911 when the commission was formed and there is a set of logbooks of commission discussions and well as a set of maps (some maps appear missing). I spend about two days at the archives and found in the journals the progress of the conversion of the Salmon River Wagon Road to the State highway from its earliest discussion in 1917 until at least 1933 when they were installing signage. The project crossed through numerous jurisdictions, Polk County, Tillamook county, Lincoln County, with perhaps a small piece in Yamhill County. As well there had been two Indian reservations there, Grand Ronde and Siletz. The land in the footprint of the road was by-and-large sold from both reservations by 1907, but the federal government still had interests in the section of the road that ran through Grand Ronde on the way east to Yamhill County and Marion County.

In the collection mentioned, I found the original blueprints of the Tillamook County section of the Salmon River Highway. On the map pages was noted the original wagon road and the proposed new highway route. There is also noted the homesteads, houses and present owners of each of the parcels of land along the route. The rivers are also noted, what appears to be the headwaters of the Little Nestucca, The Little Salmon River, several creeks, a Sulpher Springs and the main stem of the Salmon River.  The blueprints also have a section depicting elevations of the route. There is enough detail that if we wanted to we could find the original trail based on a number of junctions that still exist today.

Section showing the Boyer DLC where the original Tollgate was on the wagon road. The tollgate location is not noted, but note that the original trail is in a significantly different location, with two junctions with the new highway.

At the joining of the Salmon and Little Salmon rivers near Pitner well within the Van Duzer section, note section of Channel change.

Note location of Pitner, also on the north, the Miami Corporation was a huge land owner in this area.

At the Tillamook and Polk county line, there may have been a Town of Midway at some point (today there is a Midway on Hwy 22), note Pheasant creek. Might there have been a secondary trail to Midway previously? 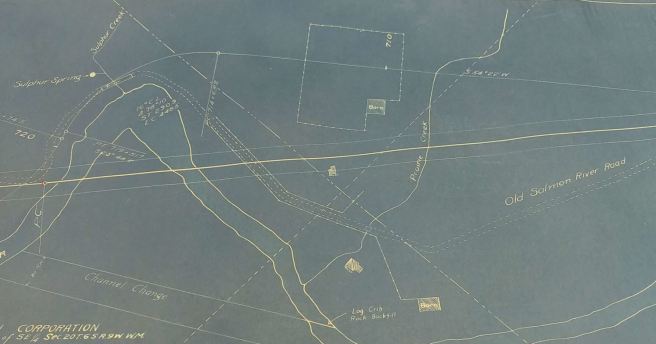 At the Sulpher Spring, note log crib to create the river channel change, and Prairie Creek 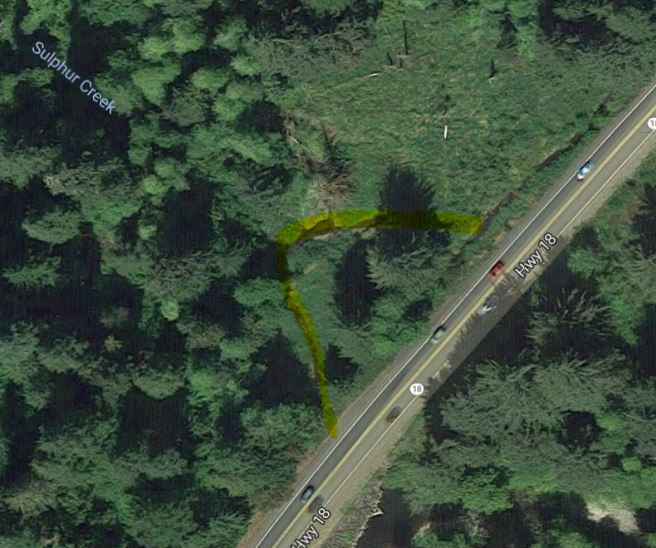 That same section of the highway today still shows the signs of the original river, now reduced to an oxbow creek

Salmon River Highway is one of the primary routes in Oregon today. The original Elk Trail that became a wagon road is an important route to the Oregon Coast, one of the most well traveled and picturesque of the routes to the coast.