Is Climate Change Always the Reason for Wildfires?

Recently, in the media the subject of climate change has again become popular. In NPR interviews scientists have discussed  how reporters need to not just be reporting the wildfire season, or the effects of massive environmental disasters, without linking them to Climate Change. Rarely is climate change mentioned now, perhaps an effect of the Trump administrations dampening down climate change research, ignoring climate change as a serious problem to our society and nation, and  removing or deleting climate change research from federal websites. With little or nothing online on federal websites, no actions by the federal government, the media has stopped reporting on climate change. The climate change work now being done is mostly at universities, at tribes, and somewhat separate nongovernmental organizations that are continuing to work despite the lack of attention or support from the federal government. In fact the Trump administration’s policies appear to be moving in the opposite direction with programs and departments working to roll back environmental and endangered species protections which have been in place for 40 years. Also removing and reducing national park lands from protections and working to open the Alaskan wilderness  to oil drilling is a huge reversal of national policies. Tribes as well may be next as the administration is working to decrease tribal corporations’ sovereignty rights. 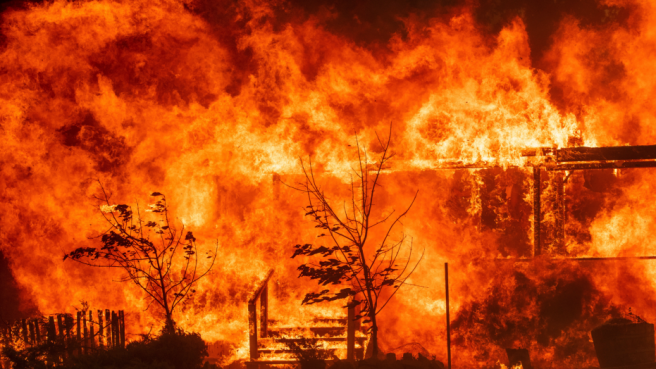 Most reporting of the massive wildfire season, for 2018, do not mention that wildfires are a symptom of climate change, human induced climate change. I think part of this is correct and part is incorrect. More correctly we should be looking critically at federal forestland management policies for the reasons our wildfire seasons are so much worse than ever before.

First- the climate change cycle we are now living through is exacerbated by human effects on the earth. The anthropogenic effects of burning fossil fuels, carbon emissions, and destroying massive green forest on the earth, at the massive extent we are doing this, is helping climate change to advance faster than perhaps any time in the past. We are literally helping the earth get warmer faster.

Second- the wildfire seasons in the United States are more massive, worse, than ever before. This year, 2018, they are happening earlier than in the past and are larger and destroying more forest and range land than before. Remember this is not a one year event but has been getting steadily worse for more than a decade.

Third- Climate change is helping create the environment for worse fires than ever before. As the earth warms up, wildfires can become more frequent, larger and more destructive that previously. The hotter the days the harder it is to fight fire and put it out. Cooler temperatures help to dampen the fire’s spread and help firefighters to work.

Fourth- While Climate Change, the cycle when the earth gets warmer is helping wildfires, it does not create them. There is perhaps a bit more in naturally setting of fires when weather systems have more lightening, and then can set fires more often. Also higher winds during hot spells can help fires spread out of control. But the most common fire setting agents, are humans and their machines.

Fifth- The massive extent of the wildfires, their ability to burn for months, their destructive potential in the forests, killing trees, brushes that may have trouble reviving because of the destructive heat of the fire, and the overall ferocity, is not created by Climate Change. This is created by Federal and state policies that have been in place for 100 years or so which makes it policy to put out fires before they can destroy the valuable timber of the forests. These forests, or timber lands, are part of the Nation’s agricultural forest-lands, managed by forest programs under the Department of Agriculture. The BLMs, Forest Service, DOA lands are all “crops” that are to be harvested at some point in the future, so the fires have to be put out to save the wood. The forests are managed for resource extraction. However, by putting out fires, the policies are allowing the duff layers, the dead woody layers of the forest floor, to continue to build up, year after year. These duff layers are then fuel for forest fires, allowing the fires to burn lower and deeper in each location and providing plenty of fuel for the fires to spread. Fores have to be harder to put out as fires can smolder in the duff layers for months, even through the winters, and then re-emerge in the next warm cycle. This actually happened with the Columbia Gorge fire between Fall 2017 and Spring 2018, when the fire sprang to life again after smoldering through our winter.

Sixth- Climate change- warmer temperatures and environmental conditions, help fires but Climate change does not help create the fuel that keep the fires going nor normally set the fires in the first place. It is federal forestland policies which truly are to be largely blamed for the massive destructive wildfires we are seeing now. If there was a different policy, like anthropogenic burning on an annual or bi-annual basis, we would not have the massive fires we have today. There would not be the fuel to keep the fires going and the fires that did burn would be less intense, more small to medium intensity fires and human habitations, homestead, towns and cities would be more easily defended.

Seventh- Tribal societies did burn their lands nearly every year. Their anthropologenic fire practices helped manage their lands, keep the massive fires at bay, and helped the land the seasonally revive and be reborn, Their fires did not destroy the forests, but just burned the last layer of duff that fell to the forest flood, allowing most of the trees to survive. Indeed, most trees will survive a normal fire, this is the reason for their bark, bark provides fire resistance. However, if there is enough fuel, dead branches, leaves, needles cones etc, around the base of a tree, it will continue to burn right through the bark and possibly destroy the tree.

Eighth- current forest management practices have wrought what they tried to prevent. Now, massive fires happen every 30-40 years in each area, almost completely destroying  the forests, or destroying a larger percentage of trees than if there were annual maintenance fires set.

Ninth- a start could be- that one to two years after a forest fire burns through an area, a new fire is intentionally set to maintain the forest. Tribes would historically set the fires in the fall when the first rains came, so that the recent dead plant matter would be burned but not the forests.

Tenth- Native peoples, Tribal nations have the understanding of how to manage their forests in a traditional way. Cultural experts need to be consulted about the appropriate way to set fires. New national forestland policy needs to be set to truly preserve our nation’s forests. Until a new policy is set, we will continue to see massive forest fires every year. There is really no other way to maintain the nation’s forests unless we are willing to denude the whole continent of forests. This is part of tribal peoples’ understandings of their lands, their Traditional Ecological Knowledge, which includes understandings of how to manage their lands they developed over the course of more than 10,000 years.

Conclusion- It seems wrong to simply blame “Climate Change” for our current wildfire season. Climate Change is a contributing factor, but, it is really Federal forestland management policies that are directly responsible for the wildfire season of 2018. Until federal policies change, we will continue to see massive wildfires, perhaps increasingly magnified in various ways by our warming global climate.