The Clatsop Chinook Indians won their case against the United States in 1958 (Findings of fact in the The Chinook Tribe and Bands of Indians vs. United States, Docket 234, April 16, 1958). By 1960 the Chinook tribe was beginning the survey of their lands so that they may recommend to the court what they were owed for their lands. The survey was quite extensive, included the going prices of timber, salmon sturgeon and other products that had commercial values. The land was also valued at a 1851 price. The date 1851 related to the year that they had a treaty written with the United States and agreed to sell their lands. The treaty was never ratified by the U.S. Congress, so the Clatsop peoples lost their lands, effectively stolen from them. The Indian Claims cases were meant to rectify this illegality, over 100 years after the land was stolen from the tribes.  The survey by the Chinook tribes was completed in 1962. 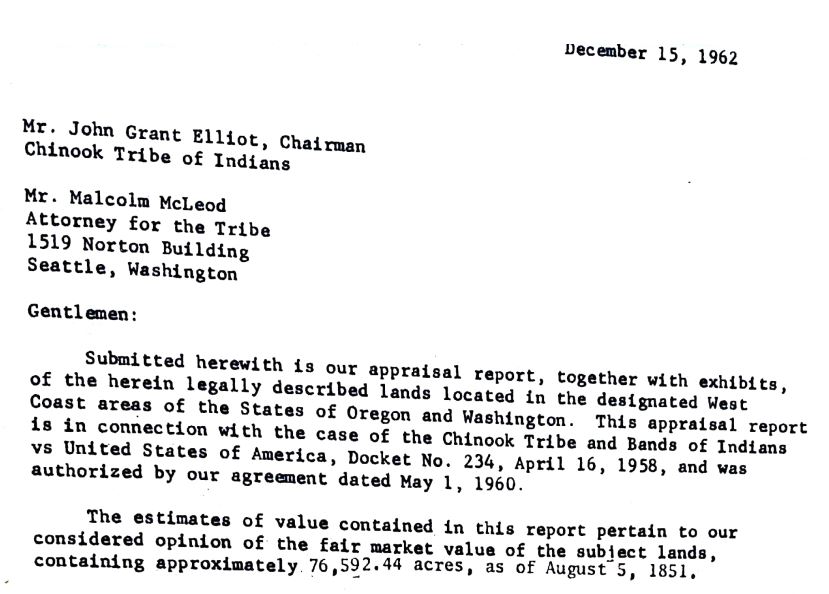 The value set for the payment of the land was estimated at $568,600 for 76,592.44 acres for a value of $7.42 an acre. This was well below what the land was worth in 1958 or 1962, instead the court chose the  year 1851 as the date the land was taken. $7.42 still seems low for that year. However settlers were gaining free land allotments in 1850, of one miles square, and reselling them a few years later for 1.25 per acre. The tribes with ratified treaties received collectively about .01 cent an acre for all of the lands of Oregon.

The survey result of 1962 suggested that the Chinookan were owed $568,600 for only the land. Additional survey results were needed for the resources on the land.

The value of the furs, fisheries, and tidelands was much more difficult to measure. For over 100 years salmon, sturgeon, and Eulachon had been harvested from the rivers and ocean in their vicinity. The Americans at Astoria had extensive processing of river and marine fishes, much of it exported to other countries or states for profit. In addition, the fur companies had taken hundreds of thousands of furs from the lands. Then logging was a mainstay of Oregon and the coast range in Clatsop County, Oregon and Pacific County, Washington, where the Clatsops resided, had dense forests which had been logged by American owned logging companies for 100 years.

For the Indian claims case, Docket 234, maps were also created to detail where resources came from. 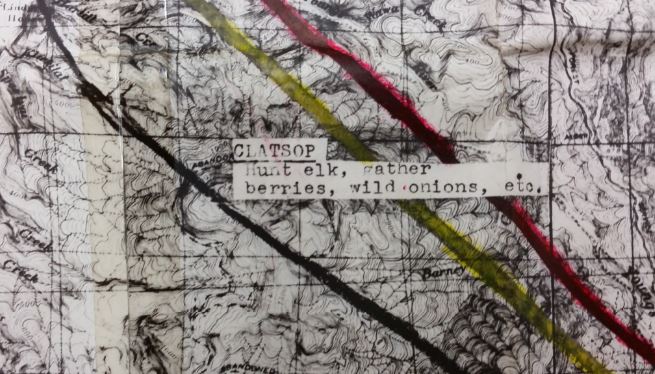 Recorded also were the major villages of the Clatsop and other Chinookans. 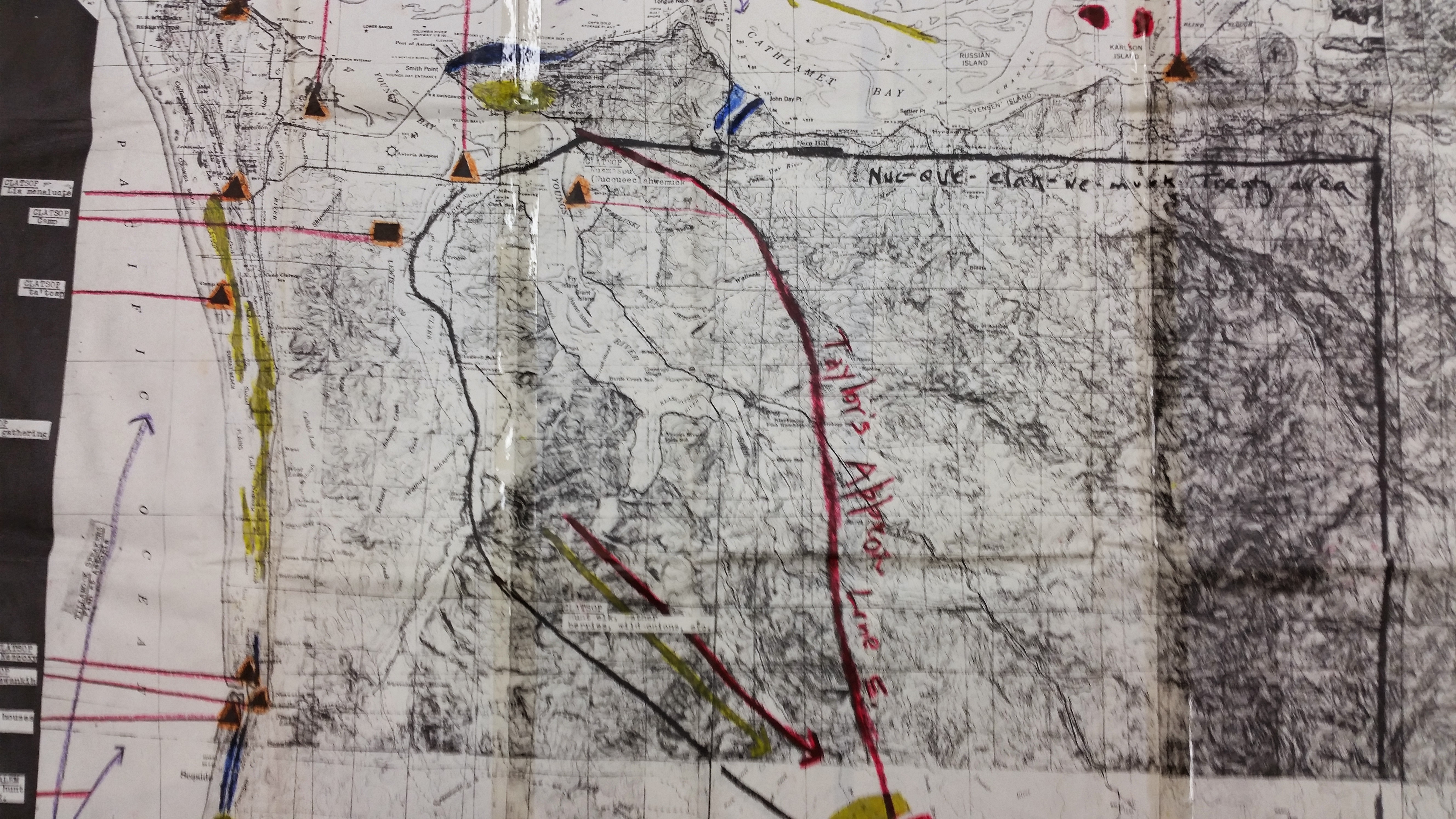 Finally, it is very clear that the lawyers were using the unratified treaties because one of their maps was a drawing of the narratives of the territorial outlines in the treaties.

The 1851 timber valuation equaled 120,000, for both Pacific and Clatsop Counties. There was not a valuation for the 100 years since the Clatsops lands were taken, because the culture of the Clatsops was not traditionally in a practice of harvesting commercial timber for sale. 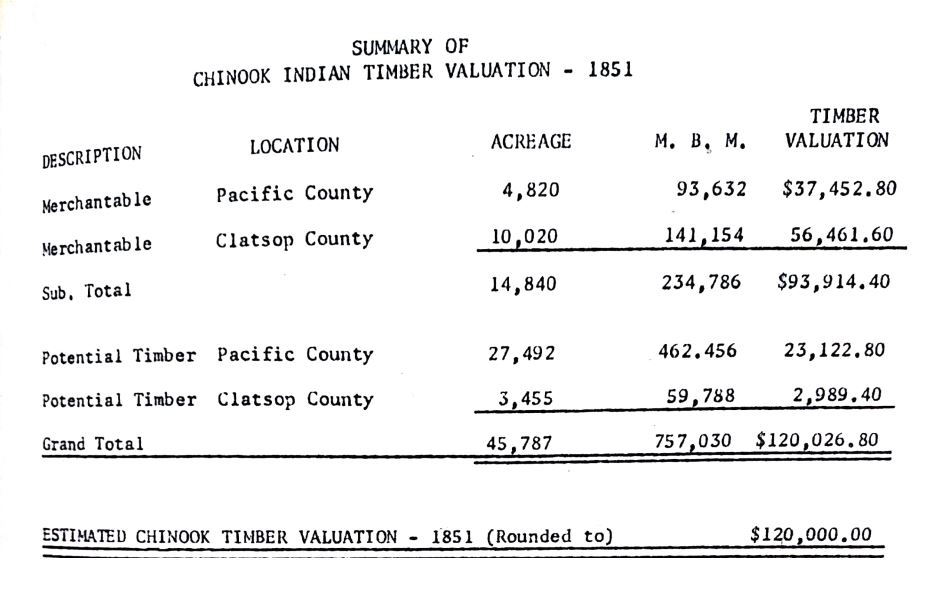 The Salmon harvest valuation was much more difficult as seasonal salmon harvest was part of the Clatsop culture. Therefore an annual harvest had to be estimated until at least 1892. 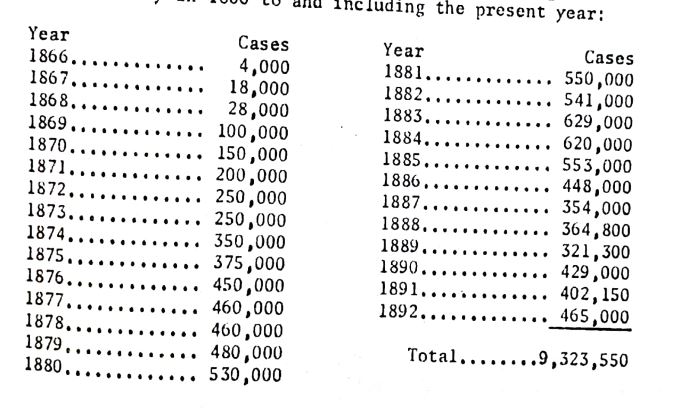 Sturgeon as well had to be figure out by its annual harvest. Caviar, sturgeon eggs were harvested from the fish to export to Russia.

Eulachon or Ooligan or smelt is not as well known fish today, but was a much more prominent fish to be harvested for eastern markets in the past. Their spawning grounds have since been heavily impacted by development in the Columbia. Native people depended on smelt for late winter and spring harvest of the small greasy fish. 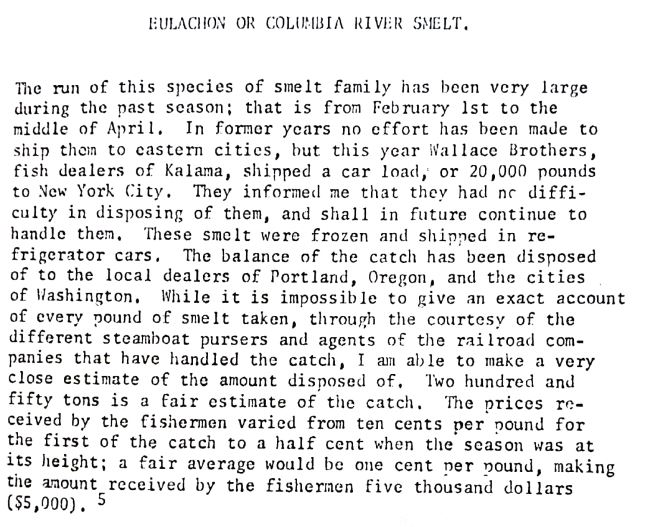 Finally the vegetable harvest also had important seasons for the tribes. Inland tribes depended on roots and berry more than Columbia river tribes who always had plenty of fish and game. 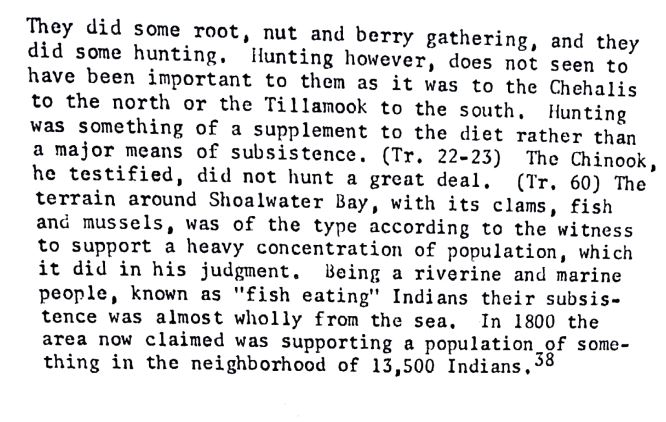 The survey included an extensive cultural ethnographic survey of the Clatsop and related Chinookan tribes.

“as of the date of the making of the unratified Treaty of August 5, 1851, with the Clatsop Indians, the population of this group did not exceed 80 people who were apparently living in the village or villages at or near the mouth of the Columbia River on its south shore near Point Adams.”

This population in the report seems low, but is exactly the same number reported by the sub-Indian agent Robert Shortess for the Clatsop tribe, and Joseph Lane reported one year earlier 72 people, while Lewis and Clark had noted their numbers to be 200 in 1805.  The Chinookan population had been decimated by malaria and other mariner and trader born diseases following the period of the fur trade on the Columbia in the 1830’s. However, the numbers do not equal up when we figure in the people of the other tribes who had treaties in 1851. Many of these tribes got treaties which were ratified later, some other tribes and and bands had gone to other reservations., Some Chinooks of this region got land at Quinault, while others went to either Grand Ronde or Siletz reservations, usually by marrying in. At least two young Chinookan boys came to Grand Ronde as orphans.

The final numbers are here inexact. It appears that ,many of the Indian Claims documents were taken from their online website recently, but the Clatsops and other Chinooks party to the case stood to clear some $3 million accounting for land and resources.  However  the final award by the federal government was much less than what the survey found here. The settlement did not come until 1970 and the final number was so low, about $75,097.4, that  the Chinookans refused to accept the award and it is still held in trust for the tribe.

“The Indian Claims Commission found that this land was worth 98¢ an acre in 1851 or about $25 an acre in today’s
dollar. Chinook was appalled by this settlement, and to this date has not accepted the funds which are still held in
trust for our community.” (Chinook Nation website: http://www.chinooknation.org/justice/inserts/8-24_insert.pdf)

This whole history is clear to all an injustice to a once powerful set of tribes and bands of the Columbia River.