Information about the Southern Kalapuyans, those south of Brownsville have been scarce to come by. The Kalapuyans in the north were settled earlier and seemed to have more people and organization that approximated the neighboring Chinookan tribes. The southern valley tribes were known early but they seemed to be more obscure in records about the tribes. It is not fully understood why, but it may be the nature of the settlers who came later and perhaps kept the tribes at arms-length, not working with them or employing them as much as the earlier settlers. Then there may have been additional waves of disease in the south valley, due to the different, perhaps warmer climate from the northern valley, where anopheles mosquitoes, who carry malaria, survived better and longer.

Up to a few months ago there were only some rare letters from Joel Palmer and a few censuses from the Grand Ronde reservation. Some months ago I began delving into census records newly placed on the Internet and available from the University of Oregon Archives and the Oregon Historical Society Library called the Joel Palmer Papers. I had been through these collections some years ago and yet I apparently missed a lot in my survey. There are some 60 pages of censuses and a lot of information in the invoices and affidavits sections of the online archive. Then many more letters addressing treaties and tribes, tribal administration etc., of which I have a few of these copies previously but many I had not previously seen or attributed value to. But also as my research has advanced, I have become more aware of individuals and contexts and now going through these collections I make many new associations that I missed earlier.

Here is what I have so far the history related to the southern Willamette Valley Kalapuyans.

Establishing the context further: The Indian Superintendent of Oregon, Joel Palmer, established a number of hubs in the valley to allocate resources, supplies, and funds to the tribes. The first hub I found was at Corvallis, at the time the tribes were to being sent to Grand Ronde. In March 1856, the tribes from the south valley, both those on the west of the Willamette and those on the east of the valley, with the Willamette River being the territorial dividing line, were to be removed to Corvallis, and there they were to catch a steamboat north to go to Palmer’s land claim, before being removed to Grand Ronde Reservation This trip was delayed for nearly 2 months waiting for the tribes from the south valley to arrive. When they did arrive the number of tribal people was well under the estimated 250, instead about 100 people were transported. The Chemapho (Muddy creek) and Chelamela (Long Tom) were early on living at Corvallis in an as-yet unidentified Indian encampment. This encampment was likely on the outskirts of the Corvallis/Marysville town, as most Indian encampments were in the region. In addition, there is a set of invoices, from Palmer, of building supplies being sent to Corvallis for the encampment, likely because this was during the cold winter months, but supplies suggesting a series of tents and facilities were erected especially for the tribes waiting transport there.

The following censuses were taken in the encampments in the valley in preparation for removal. Its likely that they were taken down by Geary who was a sub-Indian agent for the valley. 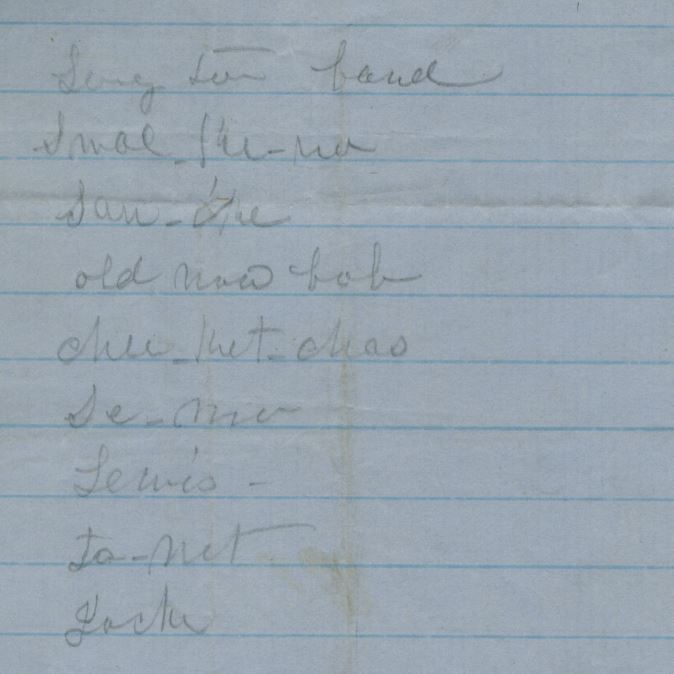 Chelamela Census documents, note the total of 20 people, then the men’s names, it was common to only list the men in these documents. These people were on the Long Tom River. 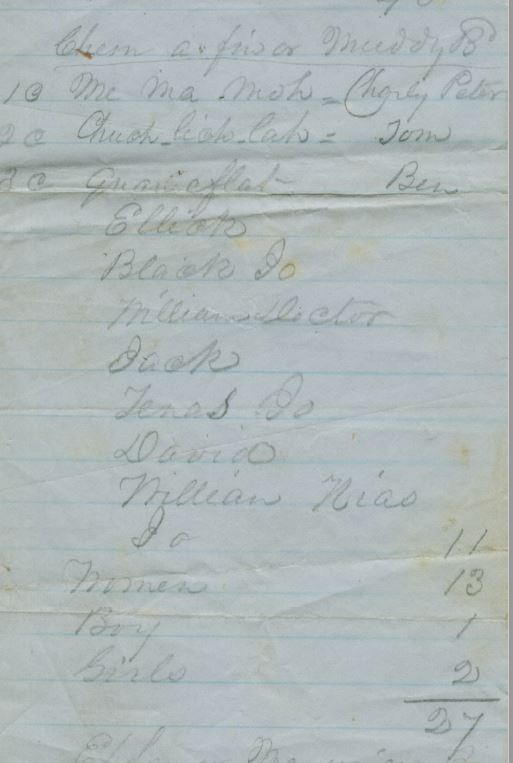 Chemapho (Muddy Creek) census with 27 people, then a list of men’s names with detailed accounting of women, boys and girls. these people were just south of Corvallis and at Alpine, Oregon. Note the adoption of American names for most men even before the reservation. 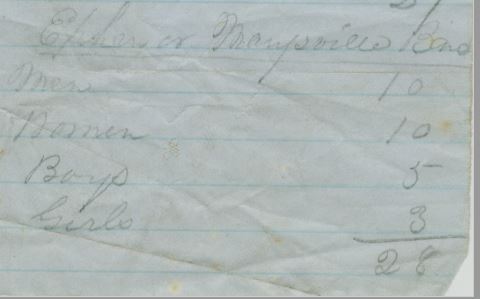 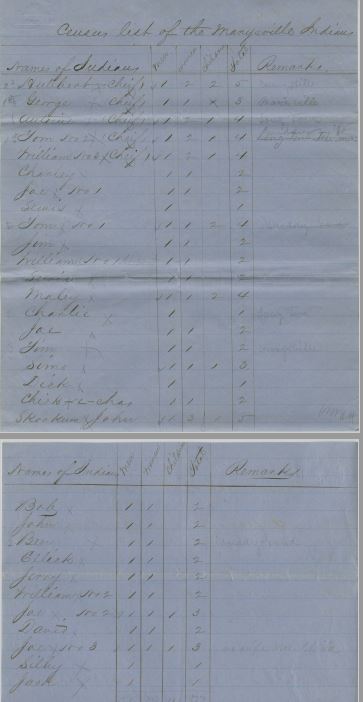 The Marysville Kalapuyans (Champinefu, Chapenefu) counts are a bit more detailed but still a low count at 28 people. These people lived on the Marys River and vicinity of the town of Corvallis. note of several listed they are called the “Epher” which appears to be a shortened version of “Champinefu”. William Hartless said his people at Corvallis were the “Pinefu”, the end piece of that the “Efu” appears to be their actual name. Still waiting on the linguists to return their thoughts about this. But “Cham” or “Che”/ “Cha” is the placename designation for villages of the Kalapuyans.

The next hub was the Jacob Spores land claim where Spores operated the Spores Ferry across the McKenzie River. There the Indian agents sent supplies and money for the Winnefelly, Chafan, Tekopa, and Peyu (Mohawk) Kalapuyans. These tribes were to be sent to Corvallis by Jacobs Spores and the valley agents as assigned by Palmer. There are records related to Spores that suggest he was operating as an Indian agent and hired folks from around Eugene to deliver supplies, some with important local names like Churchhill and Goodpasture. One invoice for Spores suggested the tribes arrived at the ferry days early for the supplies and were starving by the time the supplies arrived. 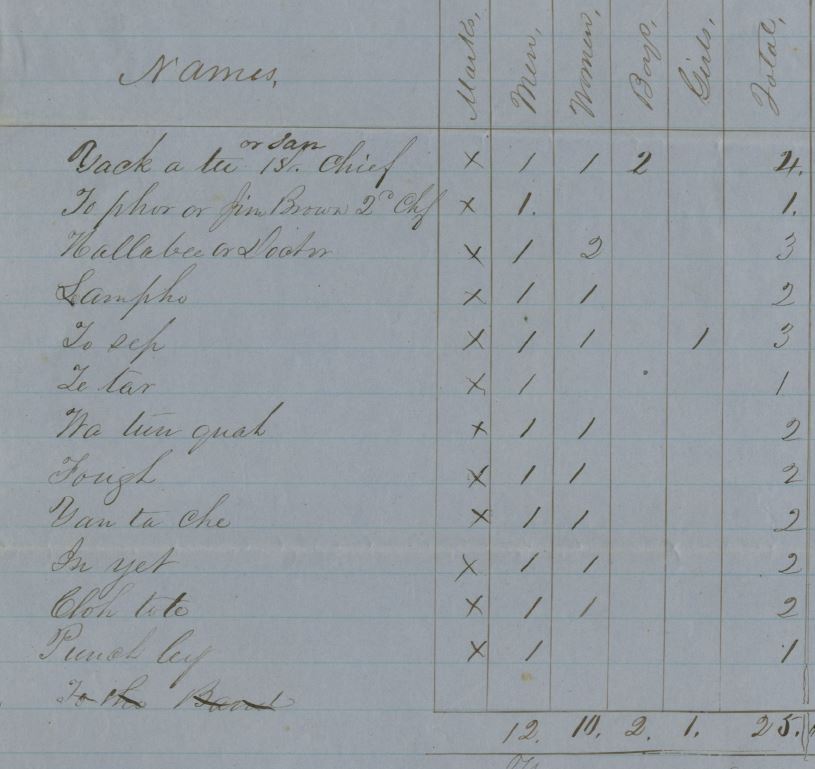 The Tekopa, in the vicinity of Brownsville and into the valley to the east as far as Sweet Home, this seems to be the only found complete census of this tribe. Fortunately we do have many accounts of this tribe and their immediate neighbors in the Linn County museum archives, some of them have been featured in essays on this site, like the Cabbage Head decoy and other stories.

The Winnefelly and Peyu (Mohawk) have only a few rare counts. 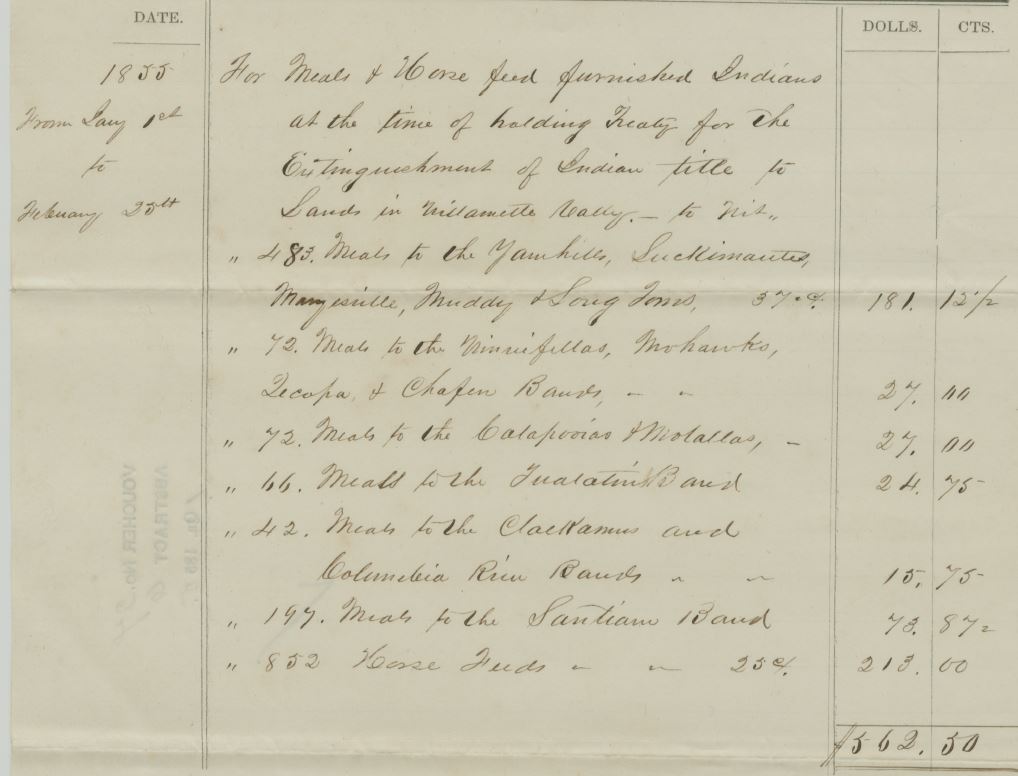 In this invoice and abstract of meal counts we can see how many meals are given to the Tekopa/Tecopa and Chafan, Winnifellas, and Peyu (Mohawks). The numbers “72” compares favorably to other tribes but low compared to the Tualatin “66” who all by themselves nearly equaled the Spores Ferry area tribes. This distribution of meals occurred in January 1855 when the tribes came to Dayton to visit with Joel Palmer to negotiate the Willamette Valley treaty. Some scholars have suggested that it was only the chiefs who came to such negotiations. Well not so with Palmer, who received most-times the whole tribe of people during negotiations. The people would assemble themselves around the negotiating tent and watch the whole proceedings as their chiefs did the talking. Note also 852 horse feeds- probably oats- a high enough number of horses, suggesting the tribes had some wealth of their own. 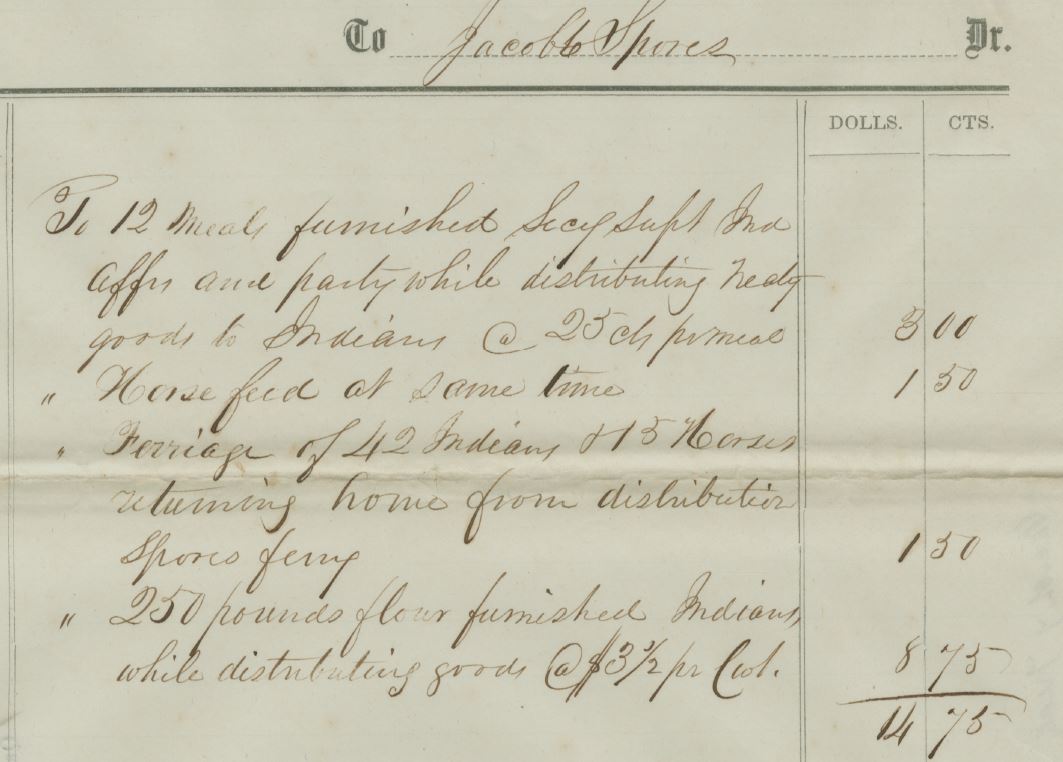 An example of a few of these invoices to Spores Ferry “distributing treaty goods” to the tribes. Note 42 Indians & 15 horses.

Finally see above the details of the “hubs” which for Palmer is at Albany – likely for the bands of the Santiam (as many as five bands!); at Corvallis- Chemapho, Champinefu, Chelamela; at Spore’s- Winnefelly, Chafan, Peyu, Tekopa; and Linvilles- likely the Luckamiute. The Linville Ferry was 2 miles from the Buena Vista Ferry so they probably serviced the Luckamiute people.

The final tribe in the south valley is the Yoncalla/Komemma Kalapuyans. They spanned the Calapooia Range of mountains and had at least one village at Row River outside of Cottage Grove, and other villages in the Umpqua basin. I will address this tribe in another essay.

The tribes above are censused again in October 1856 and their population counts are close to the other censuses from the south valley. There are reductions, Chelamela 20 to 16; Chemapho/Muddy 27 to 21; Champinefu/Marysville/Marys River 28 to 22; and Peyu/Mohawk (20), Winnefelly (23) numbers of 1856 are slightly more than the combined number at Spore’s ferry 42 in 1855. There is no indication yet where the numbers of the Tekopa are in this reservation count but if we assume 42 for the others that leaves about 30 for the Tekopa from the Meal invoice above, five more than the Tekopa census of 1855 of 25. Not every family in the tribes traveled to the treaty negotiations or took part in the supply runs.

The numbers we are grappling with are so small but it does appear a significant reduction for most tribes about a year later when they get to the reservation. There were some people who avoided the removal and were allowed to remain among the settlers. For example Eliza Young/ Indian Eliza is a great example of this, she resists removal and remains around Brownsville most of her life. For each tribe to lose what appears to be one family in numbers, could be just that one family remained off the reservation, or between 2 and five people had died in the intervening year. There is a marked increase in deaths during the early 1850s as many tribes in the region become labelled as thieves, vagrants, and scoundrels and it becomes a regular practice of some settlers and settler organizations to commit murder on tribal people without fear of legal entanglements.

This research is still rolling out as we find new documents that address the tribes of the south valley.

All copies of documents presented are publicly available on the Joel Palmer Papers website online.