Dentalia shells, a mollusk, is collected from the sea floor off of Vancouver Island and is used by native peoples in a broad region of North America.  They grow up to 3 inches (or more) long for the North West Coast dentalia, while 2 inch dentalia are not uncommon and 1-1.5 inches are the most common. Tribes of the North West Coast and California used the dentalia for money, and for decorative and ceremonial artwork.

The shells are tusk shaped, and when the animal dies, the tusk is hollow, which allow for easy stringing. The tusks are formed in layers and is easy to flake the shells, or cut off the narrow tip if the hole for the string is not large enough. The dentalia is normally strung with glass and lithic beads in contemporary use. The Native vulgare species has a glossy shell that varies in color from grey to yellow and white and may have banded color lines. Other varieties from throughout the world are in various colors.

Further inland dentalia was used to adorn Indian regalia as far east as the Great Lakes. The Northwest trade networks, that extended as far as the Rockies along the principal river systems, Columbia, Fraser, Nass, Klamath, carried dentalia shells far inland. The Northwest Network would connect with that of the American Plains, and Ojibwe (Chippewa), Cree, and other tribes would trade the valuable shells to Plains and Great lakes tribes.

Tribes in the inland region would make hats, capes and adorn their shirts and dresses with the shells by the thousands. Tribes in Washington, Oregon, British Columbia and California would make jewelry, and long dentalia shell necklaces. Many of the tribes would show their wealth at ceremonial events by heaping hundreds of shells necklaces. They would dance the necklaces in ceremonies all along the coasts and in the interiors. 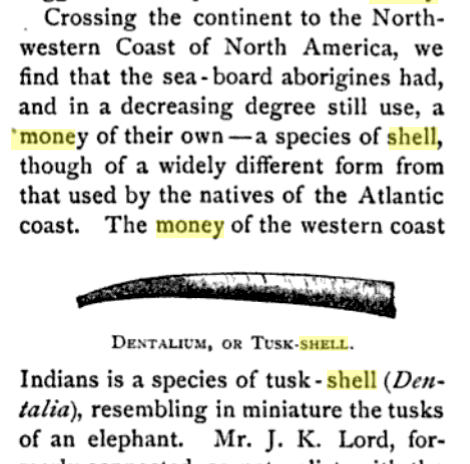 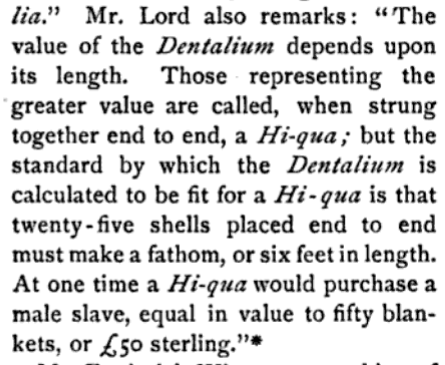 The dentalia strings or Alikachik, in the colonial period would fetch a good price, several gold pieces per string. Dentalia were even utilized, on a limited basis, in the fur trade. The dentalia shells have maintained their value to today and a single 2 inch vulgare dentalia can be worth as much as $3 per shell. The tribes on Vancouver island continue to harvest the shells and own the harvest rights to areas off the coast. They use rakes to gather the shells from the sea floor. 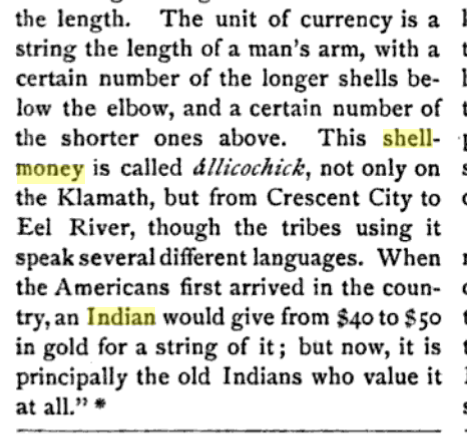 There are hundreds of types of dentalia that grow around the world. The green dentalia are said to grow in the Mediterranean, while very large giant dentalia, up to a foot long,  grow off the coast of Vietnam. The Philippines serves as the principal trading areas for the shells, where they are processed and bleach before being shipped to worldwide markets.

Tribes in the North West Coast region still use the dentalia extensively and with the revival of Native dancing and ceremonial traditions, there is a revival in the arts and crafts around the use of dentalia.

Additional article on Trade Networks on this Blog.