The original plan for the placement of the Grand Ronde Indian Reservation may have come out of the effort to locate the Kalapuyan tribes on their own permanent reservations after the 1851 treaties. Anson Dart’s statements about the Yamhill Reservation as being remote and protected may be the key, and that Yamhill reserve location at Gopher Valley is actually fairly close by to Grand Ronde Valley. These treaties were never ratified but may have informed Joel Palmer of some well-protected valleys.

In 1855 Palmer was finishing the treaties of western Oregon and when the Rogue River war erupted, began planning with the Army to relocate the tribes to another temporary reservation before moving the tribes to the Coast reservation. That temporary reserve, called alternately The Yamhill Reserve, the Yamhill river reserve or the Grand Ronde Indian reservation was planned in 1855 when the army and Plamer began buying out the DLCs of the settlers in the Grand Ronde Valley, a small valley connected to the Willamette Valley and at the foot of the Coast Range. This project successful, Palmer began making plans to move the tribes beginning in November 1855, and this is somewhat captured in the final 1855 treaty, that with the southern Molallans of the Umpqua Valley when he wrote the new temporary reservation into the treaty. In January 1856 Palmer brought the Kalapuyan chiefs to Grand Ronde to get their approval of the new reserve, so that they could return to their people and convince them to remove when the order came. In late January began moving the tribes from all temporary reservations in western Oregon to the Grand Ronde Indian Reservation, and sent orders to his sub-agents to this effect. Indians from the Table Rock, the Umpqua, and the temporary Willamette valley reserves were brought at various times to Grand Ronde arriving from March and well into the summer. Indian continues to arrive for several years as bands of stragglers were found and rounded up and forcibly removed.

At this same time, some of the coastal and southern Oregon tribes were removed to the Oregon coastline from Siletz estuary to the Salmon River. Tribes from the Coos Bay region removed to Yachats and the Alsea estuary area, a settlement which became the Alsea Reservation. The Umpqua Reservation remained open for another decade for Umpqua Indians and others.

The Coast Reservation had been established in 1855 by Presidential executive order, forming a reserve of 1.1 million acres that extended from Tillamook to the south of Florence. Yet in 1855, Palmer was looking as at a significant build-out of the reservation facilities meant to manage some 4,000 Indians. He was beginning with an intractable wilderness and so the plan had been to develop the facilities in the Siletz valley for a couple years and then remove the tribes, but with the war and conflicts in the region he could not wait any longer. Once the Grand Ronde reserve was formed, it already had good roads and routes to supplies built by the original settlers. In 1857 the new plan to have two reservations, one for peaceful Indians and one for those who had gone to war against the Americans,  was maintained. That year, the Grand Ronde Indian Reservation was created by Presidential executive order and it became an official permanent reservation.

The number of acres in the Grand Ronde Indian Reservation has been a moving target over the past century and a half. Normally the reservation is discussed as being 60,000 acres. In numerous federal reports the acreage mentioned can range from 59,000 to 69,000 acres.

The variation in acreage has confounded historians and so most have simply chosen an estimate of 60,000 acres. The acreage is important for the tribe today. The extent of the reservation and the location of the original boundaries can determine whether land can be put into trust and determine what status it will achieve, either in-trust reservation or non-reservation lands.

Then, the majority of the reservation lands were originally part of the coast range or mountainous peaks like Spirit Mountain. As such these lands could not be easily settled upon. So when allotment came in 1887 under the Dawes Allotment act, most of the allotments were on the valley floor or on the edge of the foothills. The location and extent of these allotments are important.

When the reservation was being put together, Joel Palmer and the Army were buying up donation land claims of the early settlers. Most settlers chose to take a cash payment for their lands and remove elsewhere, buy at least one family, Kuykendall, chose to remain. This homestead was engulfed by the reservation and the acreage should not have been included within the figure for total acres. None of the government stated acreage totals discuss this area of land.

Finally, the BIA (Office of the Commissioner of Indian Affairs in the 1850s) set aside several plots of land for the Indian agent, for schools, for mills, and for churches. This area became known as Old Grand Ronde. There was a section set aside in the early days for Fort Yamhill, and the buildings serving the garrison of soldiers. The fort was closed in the 1860s with the advent of the Civil War. 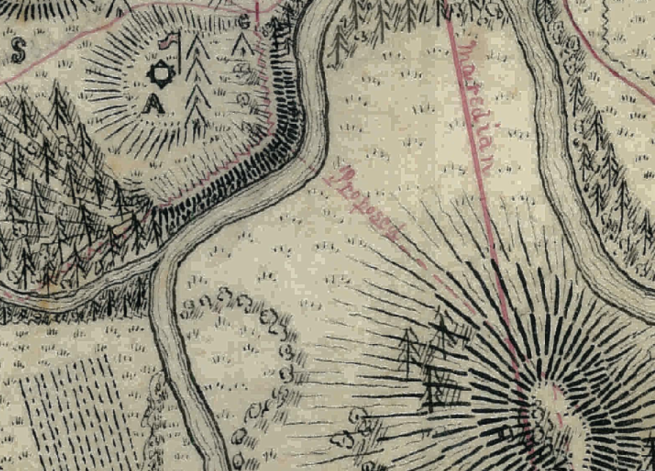 Section of 1856 Map of GRIR, OT showing narrow passage the people had to walk through to get out of the Grand Ronde Valley, with Fort Yamhill on the Hill watching the Pass

In the 1870s, the Indians were given informal allotments, of which not much information have come to light. There was a survey of the reservation at this time, but again records are rare. It could be assumed that these informal allotments may have closely paralleled the allotments assign Native people in 1891. In fact, recent information from Grand Ronde has suggested that the allotments may have been clustered around their original tribal grouping when the tribes were first removed to the reservation. If so, the 1856 planning map may align well with the places many descendants of the original peoples settled and were allotted. 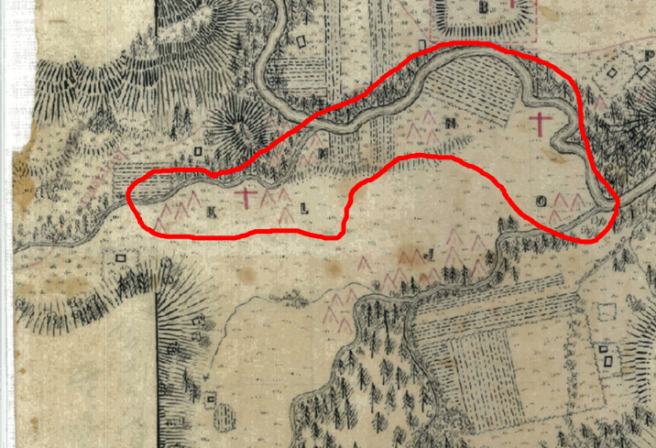 In the 1870-1890s, the state of Oregon was given the roadway footprints for highway 18 and 22, to Lincoln City and Tillamook. These roadways were built by the Indians at Grand Ronde to access fisheries on the coast. For a time the road to Lincoln city/Salmon River was a toll road. Each roadway represents a loss of reservation acreage.

The following is a series of descriptions of the reservation boundaries of the Grand Ronde Indian Reservation, in a chronological timeline.

As far as I have official knowledge of the boundaries of this reservation, the whole of the arable land is now fenced in; we shall, however, need a great many more rails to subdivide the fields; the balance of the land is mountainous, and covered with dense and almost impenetrable forests, destitute of grass and game; indeed there is no game of any kind in this section of country… i have caused the arable portions of the reservation to be surveyed and set apart to the several tribes. This at some future time, will greatly facilitate the subdivision of the land among the different families under the treaty and will also have a beneficial effect among the Indian generally, and encourage them to stay upon and cultivate their own land. -John F. Miller Indian Agent for Willamette Tribes

A report of the Commissioner of the General Land Office concurring in the recommendation that the lands embraced in townships 5 and 6 south, of range 8 west, and parts of townships 5 and 6, of range 7 west, Willamette district Oregon, as indicated in the accompanying plat, be withdrawn from sale and entry, and established as an Indian reservation be established, and have accordingly prepared a form of endorsement on the plat of the same for your signature in case the recommendation is approved. …

University of Washington Image, Reduction and changes to the Grand Ronde and Coast reservations

This reservation consists of two townships and two fractional townships of land adjoining the Coast Reservation, withheld from sale by an executive order, and upon it is located the oldest Indian agency in the superintendency.

Grand Ronde Agency, situated on the western edge of the Willamette valley, adjoins the Coast Reservation, and is the oldest agency in the superintendency, embracing a tract of 3,888 acres. …

Grand Ronde agency, situated on the western edge of the Willamette Valley, adjoins the Coast Reservation, and is the oldest agency in the superintendency, embracing a tract of 3,888 acres.

Grand Ronde agency.- the Indians of this agency comprise the Molalla, Clackama, Calapooia, Molel, Umpqua, Rogue River and other bands, seventeen in all, with a total population of 870. the reservation upon which these bands are located is in the northwestern part of the state. It contains 69,120 acres, and was set apart for their occupation by treaty of January 22d, 1855, with the Molallas, Clackamas, etc. and by Executive order of June 30th, 1857.

1888, Indian education and civilization: a report prepared in answer to Senate … By United States. Office of Education, Alice Cunningham Fletcher

1907 report of the Commissioner of Indian Affairs to the Secretary of the Interior,

1914– Indian appropriations Bill hearings before a subcommittee of the Committee …

The Grande Ronde Reservation was created by treaty and practically the entire reservation- 32,983 acres- was allotted  to 269 Indians, no surplus tribal land remaining.

1936- Rehabilitation program. Some acreage bought back and allotted. Homes and governance hall are built. Many Indian men and women at Grand Ronde and Siletz participate in the Indian CCC camps (Civilian Conservation Corps), building houses and developing agricultural fields.

1954– termination of the tribe under PL 588, setting up the sale of community property. the tribal business committee voted to sell all tribal allotments as community property and divide the proceeds. Those who had the money has first rights to buy their allotment.

1956– Final termination bill is passed. Most of the allotments sold. The remaining reservation acreage was the governance hall property and the cemetery. A trustee from Sheridan managed the property and the sales, and managed the minors trust accounts. By the audit of the property in the 1970s, only about 5 acres remained of the reservation, which was the cemetery. Soon after more acreage was purchased. Final per cap payment is $35 per tribal member.

1970s– According to the audit of the remaining reservation property in the 1970s, only about 5 acres remained of the reservation, which was the cemetery. Soon after, more acreage was purchased.

1988– Grand Ronde Reservation restoration, 9811 acres is restored. The original plan was for 15,000 acres but this number changed through government negotiations.

Contemporary reservations, 9 are in Oregon.