The Treaty with the Cow Creek Band of Umpqua is the first treaty in Oregon to be negotiated and ratified. The treaty establishes the Umpqua Reservation for the Cow Creek tribes. This reservation eventually became the temporary reservation for the Yoncalla Kalapuyans, Umpqua Tribes (upper Umpqua River), and the southern Molallans. Records from Douglas County Museum suggest that the settlers were not happy with this reservation in the western section of the Umpqua Valley. It contained many valuable pieces of property and vast stands of forest-lands desired by the settlers for building materials. Settlers from Roseburg and other smaller communities would steal logs from the reservation to such an extent that the Indian Agents could not manage their access. 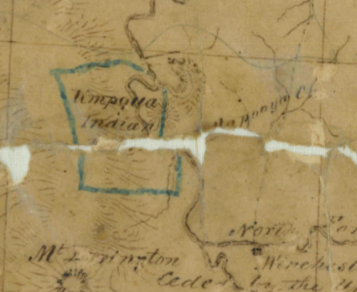 The Tribes at the Umpqua Reservation are removed in January 1856 which is chronicled in this account from Robert Metcalf. The reservation is not abandoned, and the Coos Bay tribes are removed there for a time before their removal to Yachats Sub agency on the Oregon Coast. The reservation remains in existence well into the 1860s with a scattering of tribes from the region.

The Cow Creek tribes are enumerated at Grand Ronde Reservation for a few years. Eventually many of these tribal people leave Grand Ronde to return to their region. Indian agent reports suggest that the existence of these people back in their homelands at Days Creek near Roseburg was unwelcome by the white Americans, and there were calls to remove them. But many of the families in the tribe remained and found ways to integrate with the southern Oregon pioneers. A few family names are shared between Grand Ronde, Siletz, and Cow Creek tribes today due to intermarriage (ex: Lachance). The Cow Creek people married with French-Indian fur traders, and others, and many maintained their residence in their homelands, eventually gaining off-reservation Indian allotments through the General Land Office at Roseburg.

The lands contained within this treaty, and ceded to the United States, are relatively small compared to other treaties in the region.

The Tribe occupied a mountainous transition zone between the Umpqua River tribes and the Rogue River tribes, Canonville and Days Creek, essentually where the Seven Feathers Casino is today. Some accounts of the removal of the Rogue Tribes suggest that they were interrelated with the Cow Creek Band of Umpquas. Individuals at the tribe today feel that their language was Takilman rather than the Athapaskan upper Umpqua language. The following is Kappler’s transcription of the treaty.