When the tribes got to the reservation in 1856, the federal Indian agents were then 100% responsible for feeding them and caring for their health needs. I have documented in numerous essays that the federal government was slow to appropriate funds for the reservation, even when they had treaties, and that hunger and starvation was a major issue on the reservations. As well, I have documented that illnesses and diseases were also a major problem on the reservations. For the over 2000 Indians at Grand Ronde, there was only one doctor, and while there was a hospital it was limited, because in the first few years some 75% of the Indians were sick in any 6 month period. Many people died on the reservation without any medical attention, either because they did not trust the “Boston” doctor, or because the doctor was too busy to tour around and check every tent with a sick person. Many deaths went unrecorded in these first few years.

In about 1857, the Indian agents were continually sending letters to the Commissioner of Indian Affairs asking for more funding, for funds for building dwellings, schools, medical supplies, and food. It was very apparent that the federal government would not easily change the way it does things, in order to save Indians some 3,000 miles away from Washington, D.C. The agents began getting creative with their resources. They employed Indian labor in most projects because they would not have to pay them much, then the Superintendent of Indian affairs for Oregon would apply the funds from ratified treaties to other reservations where the tribes did not have treaties, like most of the Coast Reservation, just to pay for the basic needs. But the problem of the need for more medical care, more employees, and more food did not go away, and throughout the west Indians were starving on reservations.

So in 1858, the Commissioner ordered that the tribes produce their own food and  asked for information about the medicines of the tribes. The following letter addresses this request for information about medicinal plants,  in a limited fashion. Its clear that the Native peoples were not trusting of the agent, or the doctor, and would not reveal much about their plants, and that they were living in an unfamiliar land.  about this last, its unclear why the agent did not talk with the Kalapuyans as the Yamhills could have been more helpful for plants on the reservation, because this was their original homeland. Those plants revealed are interesting as the agent includes their tribal names in his report. It remains to be seen what these plants are today.

In reply to the Circular from the Department of the Interior dated April 30th 1859, requiring information as to the various medical plants used by the Indians on this Agency, together with the medical virtues ascribed by the Indians to them etc. I have the honor to report as follows,-

Most of the Indians on this reservation having been brought from a considerable distance and then medical wants supplied by the Dept. they pretend to but little knowledge of the medical virtues of the plants in this vicinity. I have however with the assistance of the Physician attached to this Agency been able to obtain the names of a few plants used by them. 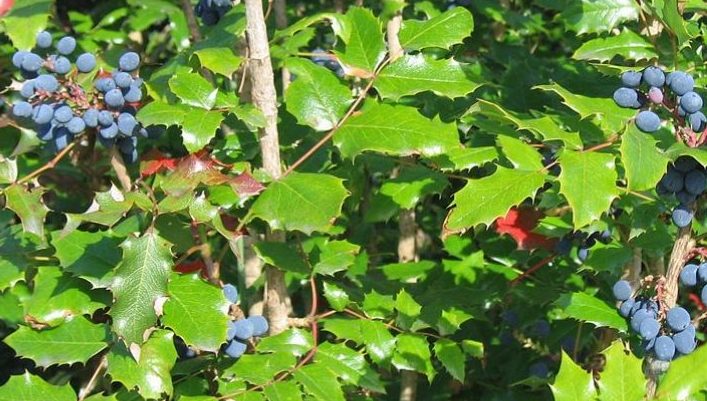 The bark of the root of what is known in this country as the Oregon grape is used by them, in the form of an infusion, as a cathartic. The plant is a shrub with a woody, rough, erect, cylindrical stem, about 20 inches high, covered with a grey epidermis, has a long horizontal root; ovate, glabrous, quinate radical, acuminate, dentate leaves, dark green above and light green beneath. The first grows in bunches or raccines, somewhat like the common frost grape, and resembles juniper berries in size and I think in color.

The following plant is considered a good narcotic, – it is known by the Rogue River Indian under the name of “Yorks.” It has an erect, fibrous, smooth, hollow, yellow stem, about 2 feet high; small, ovate, dentate, glabrous, green leaves, brownish, knotty root, with numerous long fibres.

The roots of the following plants are used as emetics.

The first is called in the Rogue River Language “Penn.” It has a root in shape and size precisely like a very small onion, and a flax like stem, about a foot high, with a bunch of small triangular seed sacks around the top.

The second is known in that language as Es-quck. It has a jointed, branching, smooth, green stem, somewhat trailing, cordate, pubescent leaves, dark green  above and light green beneath; root-stemlike, and gradually tapering.

The above remedies are used in  most complaints and without much judgment; they are formed in latitude 45o   [North Salem is at 45o ]North; and cannot be obtained in very large quantities; they can be gathered within 25 miles of Steamboat navigation of the Yamhill River, a branch of the Willamette if not nearer, the facilities for sending them to that point are good.

Hon. A. B. Greenwood, Commissioner

Unfortunately, no persons are directly identified in this letter. Miller appears to have been taking with strictly Rogue River informants. If anyone has any ideas what they plants are, I will update the blog with that information.