A creek in Salem, Oregon, presently named Mill Creek (GNIS 1163145), was named such in the 1850’s. To aid the flow of the original creek, that had been called Chemeketa Creek, a millrace was constructed between the Santiam River, down Mill Creek and into Pringle Creek to provide power to the Salem Woolen Mill. The millrace is being used to the present day, and the present Willamette Heritage Center’s Mission Mill continues to harness the water of the millrace to operate parts of the existing mill. 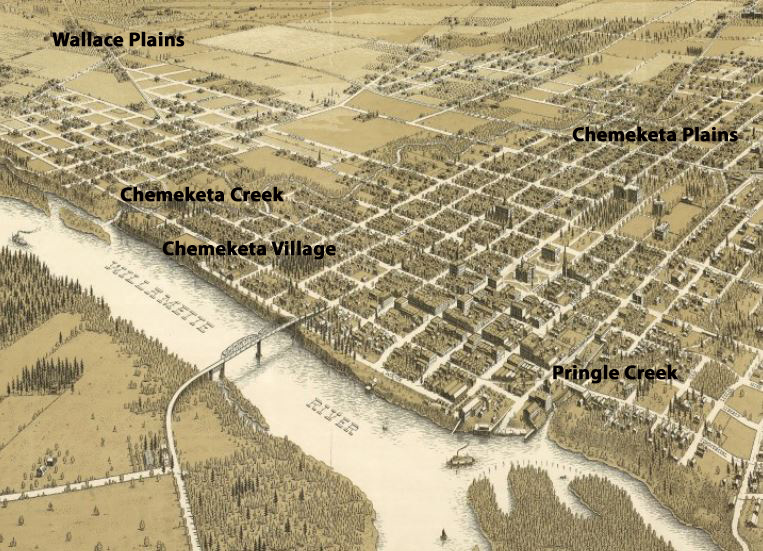 Previous to the establishment of the settler town of Chemeketa (1842), which was later named Salem (1844), there was the Kalapuya Indian Village of Chemeketa (chimikiti, tsamikiti) that was spread along the east bank of the Willamette River between Mill Creek and Pringle Creek. The main village was mostly centered at Chemeketa Creek. The grassy plains to the east of this location was called Chemeketa Plains by early settlers, and the Plains somewhat to the north of Mill Creek were Wallace Plains, named for the 1812 establishment of Philip Astor’s Pacific Fur Traders post named Wallace House, at present day Keizer, Oregon. The trading post and hunting lodge was built by William Wallace and other fur traders and occupied for about two years.

The area around Chemeketa (Salem) was occupied by bands of the Ahantchuyuk and Santiam Kalapuya peoples. The Chemeketa Village was inhabited by a tribe of Kalapuyan Native people who were associated with the Ahantchuyuk Kalapuyans between the Pudding River and Chemeketa village. To the south, in the South Salem Hills (Red Hills) were bands of Santiam (Halpam) Kalapuya peoples who lived between Chemeketa at the north, to Brownsville at the southern terminus of their territory. In fact the 1855 Belden Map depicts the junction of numerous Kalapuya territories and even a Molala territory at or near Salem (within Marion County). Early settlers called Mill Creek Chemeketa Creek (Chemeketa Stream) based on the tribe who lived at the outlet of that stream.

Research has uncovered these references to the name of Chemeketa Creek.

The Gibbs-Starling Map (1851) is the only map thus far which places Chemeketa Creek / Chimikitty Creek on the map.

The commentary notified me of the original placename. A newspaper article at the Oregon Historical Society Library letterbooks (unreferenced, Likely Capital Journal ) addresses the creek:

The Salem Woolen Mill- How time and “White Men” have changed the Banks of the Chemeketa (emphasis added). …The Mills are situated at the extreme edge of North Salem, near a stream known is early times by the Indian Name of “Chemeketa.”(emphasis added) Now it is called by some common American Name, and the old appellation will soon be lost to all except the antiquary. By the way, “Chemeketa” is the proper Indian Name for the Town of Salem… 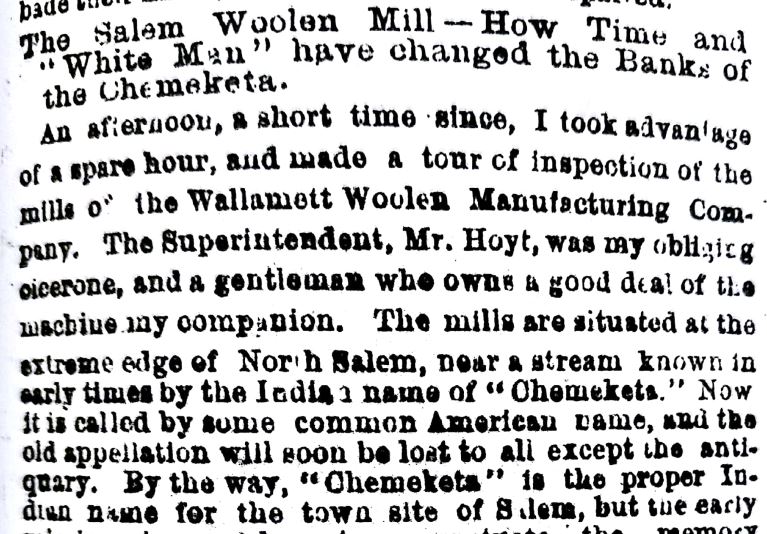 The second mention of the name is in Bancroft’s History of Oregon,

The manufacture of Oregon wool into goods was neglected until April 1856, when a joint stock association was formed at Salem for the purpose of erecting a woolen-mill…. The company purchased the right of way to bring water of the Santiam River to Salem building a canal and taking it across Chemeketa Creek (emphasis added), making it one of the best water powers on the Pacific Coast. (731 fn)

(From looking up the matter of the pioneer woolen mill, and digging of the race to bring more water by tapping the Santiam, the Bits man finds that the Original creek now called Mill Creek was in the beginning called Chemeketa Creek. It was appropriate, from the Indian Name of the site of Salem-Chemeketa, place of meeting; likely ancient Indian city of refuge.) (SJ 12, Jun 1934, page 4)

The Village of Chemeketa is noted in numerous sources. A key source is Henry Zenk’s essay The Kalapuya Presence in Oregon’s Geographic Names (2006) (http://www.orww.org/Kalapuya-Amin_2006/Program/ZenkH/Kalapuyan_Names_20060908.pdf)

Zenk’s note that the village was Santiam is likely based on a Melville Jacobs’ notebook notation that states that the Che-Halpam (Santiam) people were at Salem. This is essentially correct, as Salem apparently was at the junction of several territories, with the Santiam claiming the south Salem district. They likely had a band at the village noted in Lewis H. Judson’s 1962 Marion County essay (Indian House Pits in Salem) that noted the location of a Kalapuya village in the neighborhood of South Salem High School. That site today is urban housing and the high school, and the house pits are gone. The site is on a hill, between the two tributaries of Pringle Creek, which is typical of many Kalapuya villages, to build just above a flood plain.

The Statesman Journal  from 1926 provides more commentary about the Chemeketa village;

The Indians had a large village where Salem now stands, before the occupation of the country by white settlers, calling their village “Chemeketa, our old home.” Their burying ground was within the present boundaries of Willson avenue, Salem’s Public Park. (SJ 28 Mar 1926 page 16)

If this is true, then its possible that Wilson State Park, or the grounds of the State Capitol could be an Indian Burial ground.

The city of Salem was suggested by Jason Lee a Methodist minister way back in 1834….they founded a mission at an Indian village called Chemeketa, a name spelling in various forms, which mean “Here we rest. ” They built a group of houses, a mill, a school and various other necessary structures… They cultivated several hundred acres of ground and taught the Indians the arts and crafts of peace as well as the gospel …. (SJ 3 Oct 1909, Page 1)

As you know the first settlers came to Salem in 1840, a group of Methodist missionaries…. they settled 10 miles below what is now Salem… and moved in July 1841 to Chemeketa, what is now our Salem. Schools were started at once- their first move of building culture in the crude west. The nucleus of Willamette University was formed in 1842 the famous old school started. It was called the Oregon Institute. We find the village of Chemeketa growing with the immigration of 1845. Lots were plotted and a survey was made in 1846. (DCJ 8 Feb 1936 page 5)

Lewis A. McArthur… says , and all historians confirm it, that the Indian name for the Salem locality was Chemeketa, which is said to have meant “meeting place or resting place or possibly both.” In 1840-41 the Jason Lee Mission was moved from its old location near the Willamette River about ten miles to the Chemeketa Plain and extensive improvements started. “While the new establishment was called Chemeketa, it was better known as the Mill, on account of the establishment of Mill Creek. In 1841 missionaries established the Oregon Institute and a building was stated. Bancroft in his history of Oregon says that David Leslie, president of the trustees, named the place Salem. Leslie M. Scott in his history of the Oregon Country says the place was named by W.H. Willson, which is verified by the late R.J. Hendricks…. (CJ 2 Aug 1960 page 4)

The lack of the early name of Chemeketa Creek was likely caused by the fast settlement and development of the townsite of Salem. The Americans quickly replaced the Kalapuyans and displaced them to other villages north or south of the townsite. As stated above, the Woolen mill and millrace was being developed in 1856, and the resulting millrace. The name of Mill Creek existed in surveyors notes in 1852, suggesting that there were already Mills in operation on the Creek. As reflected by Bancroft’s footnote, the name of Chemeketa Creek was already in danger of begin forgotten by 1856. There is not a good quantity of early maps of Salem in this time period. The Willson Map of 1846 may have the creek, but I have not found this map yet.

It is common through the United States that settlers used tribal names to denote the main creek, river or stream in the vicinity of the main tribal village. This is the case for the Oregon river placenames like  Clackamas River, Tillamook River, Umpqua River, and Santiam River. It is likely the case for Chemeketa Creek as well.

By the 1840s, the Chemeketa people were a small remnant of their former population due to introduced diseases. The disease, likely malaria (Boyd 1999), killed some 95% of the Kalapuya People. There were only a handful of the Chemeketas left by the time settlers replaced them in their lands. The last person who identified as Chemeketa was Chief Quinaby who died in the December of 1883.

For the reasons above, as of May 1, 2018,  I have request that there be a variant name added to GNIS, Geographic Names Information System, database for the place name Mill Creek for Salem, Oregon, to reflect the name Chemeketa Creek. There are no other variants in the listing for this Mill Creek. This change simply adds historical information to the place name and will not replace or rename the present name.

The name has been added. A successful project! 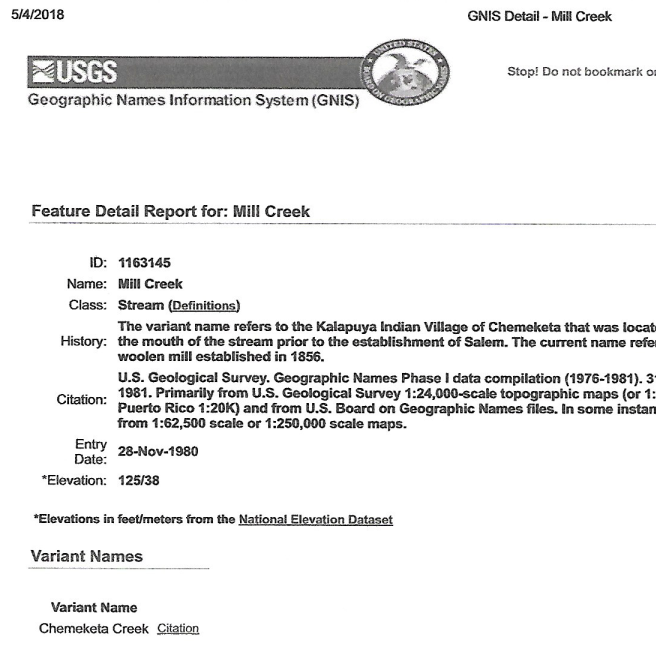 Thanks to Bruce Fisher, President, and Champ Vaughn, Past President, of the Oregon Geographic Names Board for facilitating this process! The project also officially placed the Kalapuya Village of Chemeketa officially on the national map! 4 days is a pretty good turn around for this project.