James G. Swan is a legendary scholar of Native people of the Northwest coast. He is an early federal employee in the Oregon territory and lives in the territory from 1852-1855. He originally hired on as a surveyor and worked on both the east and west coasts surveying lands. He later worked as a customs inspector at Shoalwater Bay. He was a artist and a good observer of Native peoples drawing what would become some of the most iconic images of  the Native culture in the Oregon Territory.

Swan’s book The Northwest Coast, Or, Three Years’ Residence in Washington Territory is a classic of ethnography and all about his travels in the territory and experiences with the tribes. Swan also collected ethnographic  information about the tribes and submitted notes to the Smithsonian Institution’s Bureau of American Ethnology. Those manuscripts and his letters are invaluable to scholars. The following letter appears to be somewhat unknown in scholarly studies. The letter is found in the Bureau of Indian Affairs correspondence, RG 75, M234, R611.

The contents of this letter are unique, unlike I have seen previously. Swan was very entrepreneurial and appears to have tried to develop and sell his own improved spear points to the tribes. This, and the fact that the tribes were using the hardest steel, tempered steel from files seems very advanced. This same practice is common today with woodcarvers making their handmade blades from old files. The letter and its single ethnographic sheet with drawings is a remarkable window into Native fishing practices of the Washington coast.

I send enclosed some sketches of fish hooks & spears such as are used by the coast or fish Indians of Washington Territory.

I had samples of hooks made at San Francisco, while I was residing at Shoalwater Bay, and found that they gave the Indians universal satisfaction and conformed to their view in the manufacture/ They make their hooks & spear heads of old rasps & files & form the socket of the hook of the wood of the wild raspberry & the head of the spear from Elk horn. My plan of having a socket for both hook & spear head saves them a deal of labour and has been so well approved by them that I took several orders when I left the territory to procure these articles for them, and I am certain they would be considered as most acceptable presents.

Other articles which they require and which they highly prize are Salmon or Seine twine for making nets. Float, leads, and hauling line for seines, but they would be satisfied with the twine & would rig their nets in their primitive style, with stones for sinkers & wooden floats of cedar.

Cod lines of the seine have as 24th lb the dozen.

Hand lead lines of thirty fathoms each, such as are used on good vessels for sounding & shoalwater. These lines usually come in two lengths connected & measuring 60 fathoms long. They are used in the seal fishery. Suitable knives for splitting fish & cutting blubber.

Chinese chests are very highly prized by them & constitutes and important article of trade. These chests are of camphor wood & covered with red, blue or green paint & thickly studded with brass nails. They usually come in nests of three, one within the other. They can be readily procured at San Francisco & cost from $25-$30 for each.

Black ostrich plumes, such as are sold by the Hudson’s Bay Company which the Indians wear as bands around their caps, Various kinds of fish barbs, suitable for the cod, halibut, & sturgeon or for small fish like the mountain trout, with the size of fish lines adapted to the various kinds of fishing.

The clothing they desire is like that usually furnished by the traders. But they prefer long shirts, and the old men who wear little else than shirt & blanket, like good stout hickory shirts that will reach nearly to their ankles. Such as they can purchase of the Hudson’s Bay Co.

The blankets they mostly prize are the white 3 1/2 point Hudson’s Bay Blanket, although they will wear colored ones, but white is their fancy. The women prefer for their gowns, calico with a dark blue … with little white sprigs or dots. They do not seem to fancy glaring colors or large figured patterns. White or ….cotton cloth & cotton flannel also very much sought after.

Green or blue or red faire for petticoats with needles thread. Scissors & thimbles. Dark Blues cut glass beads are highly prized. Other colors are not much used.

Other articles needed by them are those to be found on the list of the department, as for instance camp kettles, tin cups & pans… spoons, axes, hatchets, guns and all kinds of groceries, flour, whole wheat (which they boil) rice , hard bread, sugar, molasses, coffee, & brown soap.

They are very glad to get crockery ware, such as plates & dishes, and an invoice of tin ware, or the contents of a Connecticut …fair cart would be very acceptable.

If I can be of any service to the Indian Department by my suggestions relative to the coast Indians, or can assist you in procuring any of the articles (particularly the hooks) that I have mentioned. I shall be happy to do so. 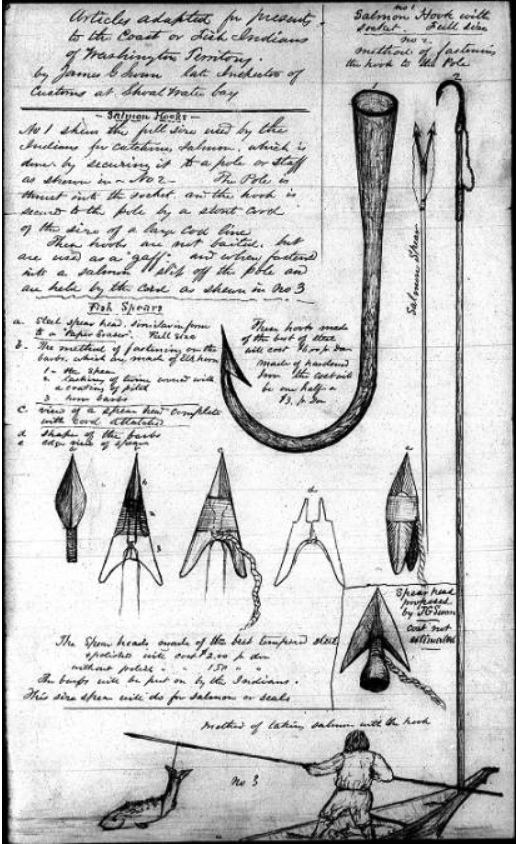 Articles adapted for presents to the coast or Fish Indians of Washington Territory by James G. Swan, Late Inspector of Customs at Shoalwater Bay

No. 1 skins the full size used by the Indians for catching salmon, which is done by securing it to a pole or staff as shown in –No 2- The Pole is thrust into the socket and the hook is secured to the pole by a stout cord of the size of a large cod line. Then hooks are not baited, but are used as a “gaff” and when fastened into a salmon slip off the pole and are held by the cord as shown in No 3. 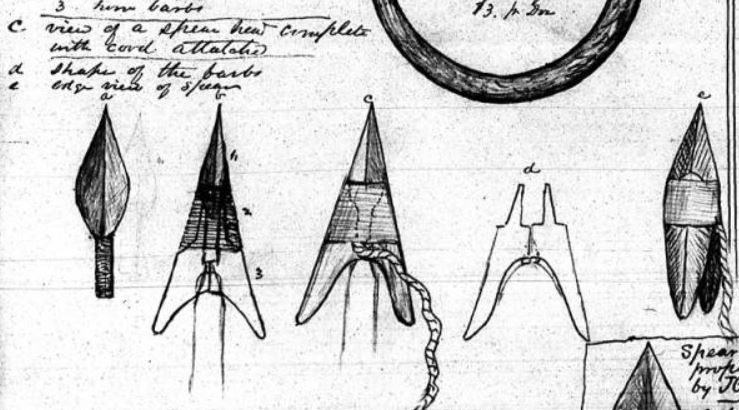 No 2 method of fastening the hook to the pole.

These hooks made of the best of steel. Will cost $6 pr doz. Made of hardened iron the cost will be one half a $3 pr doz.

The Spearheads made of the best tempered steel & polished will cost $2.00 pr doz. Without polish will cost 1.50 pr doz. The barbs will be put on by the Indians. This size spear will do for salmon or seals. 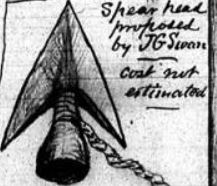 No 3 Method of taking salmon with the hook.