In anthropology there is a term “Seasonal Round” that describes, or attempts to describe, the annual movement of the tribal peoples throughout their lands. This term is now widely used in all manner of studies about tribal peoples, from history to ethnobotany,  native studies, and  geography and others. In short, the term is now widely respected as accurate and descriptive of the activities of the tribes.

Here is one definition:

Definition of seasonal round: Also known as the annual round, this term refers to the pattern of movement from one resource-gathering area to another in a cycle that was followed each year.

And the seasonal round lends itself naturally to round modelling which in pictorial form perhaps helps people to understand better what is being addressed. Each tribe has its own unique seasonal round. 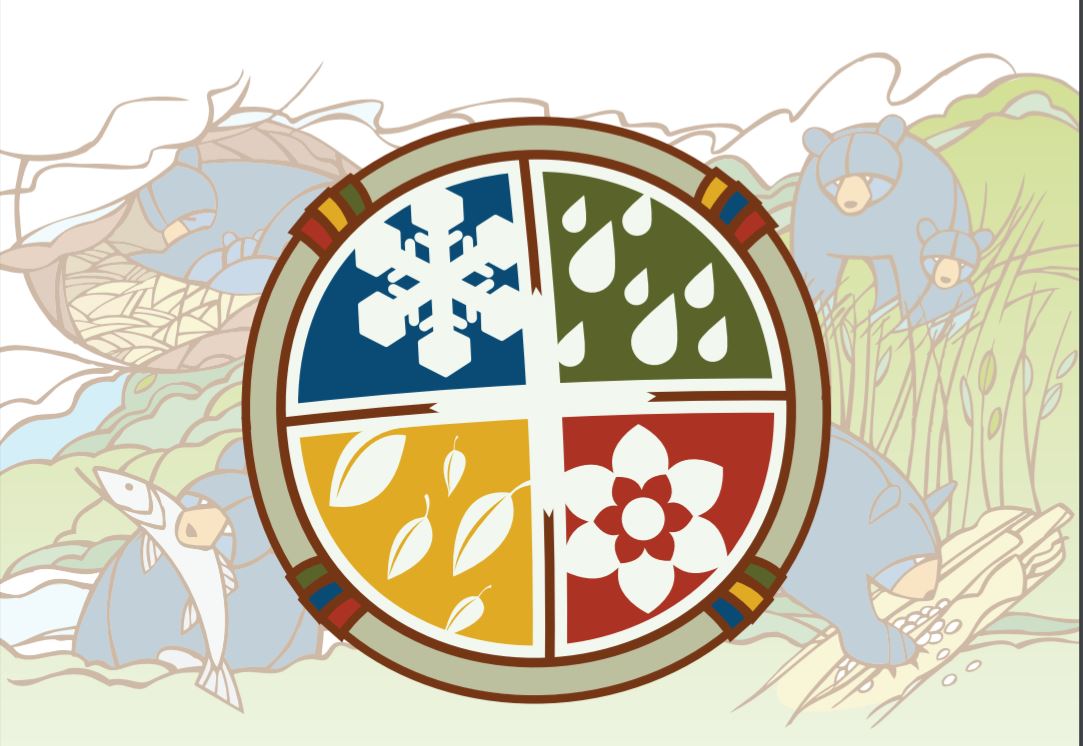 There are all manner of these seasonal round images based on the culture being addressed. I use the term all the time but recently I have felt that the term “Seasonal Round” is missing something. For one, the shape of the “round” feels confining. There does not seem to be the any room in this metaphorical image  and idea to fit in other activities.

The tribes did stay in a regular pattern of resource gathering for long periods, but village locations and resources locations could change based on environmental and human factors. People, societies constantly change and develop new ideas, structures, villages and cultural concepts. Then the tribes also conducted a lot of activities other than simply resource gathering.  They traded, they explored, they married into other tribes, they conducted ceremonies for births and deaths, yet the resource model of lifeways for the tribe is predominant.

There are a myriad of other activities that tribes did. The notion of a “round” helps to bring the activities full circle, like how the seasons change in a circular fashion, based on the movement of the earth around the sun, the rotation of the earth, and the interactions from the moon with the earth. This is a nice image, but to me it is still too confining, because as humans, we constantly do things outside of seasons based on new ideas, new technology, new culture and ways of thought. So, to me, the images of the Seasonal Round are too perfect and human actions are not that perfect.

For years I could not think of something to replace the term. Then last night I said “circuit” and suddenly it all made sense. The notion of a seasonal or annual circuit make more sense. Circuit, like that of a pony express, a mailman or a delivery driver, or even an electrical connection brings elements of human intentionality into the term, as if humans are making some decisions and choices rather than completely at the mercy of natural phenomenon. With a circuit, there are definite stops to be made to complete the circuit and therefore complete the annual travels of the tribes, bands and families. A circuit does not have to be round, and adding new stops just widens the circuit. A circuit is a human invention, of human interaction between tribes and their lands and resources, and through culture we can remake the circuit into any pattern we want, which we have.

Finally, normally, I have to explain in detail what a seasonal round is, but with circuit, the term is contemporary enough that people will instantly recognize what I mean. If I say “a yearly circuit,” it is  immediately accessible to nearly any audience. “The tribes travel an annual circuit to collect resources for winter storage and trade.” That sentence makes complete sense, with more meaning than saying seasonal round.

The term also applies to peoples’ lifeways today, we all live in a series of circuitous routes in daily, weekly, monthly, yearly, and seasonal cycles.

So, I propose a shift to this new term in reference to tribal activities. People in cultural ways travel annual seasonal circuits to resources areas where  animals, fishes, and plants  are ready to be hunted, fished, and gathered.