In recent research, (May 2018- ) I found an interesting relationship between David Douglas and Edward Sabine. They shared many similarities, both were explorers, both were interested in botany, and both were members of the Linnaean Society of Great Britain.

An archive of Sabine manuscripts is on the Adam Matthews Digital site, and this collection led me to discover how Sabine helped David Douglas to collect magnetic dip readings.

David Douglas shared lodgings with Sabine during his stay in London, and in 1828 began assisting him in his geomagnetic measurements. When the naturalist secured approval for a second collecting trip to the Northwest, he reached out to Sabine for some practical advice. “While preparing for his departure in the summer of 1829, I heard [Douglas] frequently express his regret that his limited education prevented his being able to render those services to the geographical and physical sciences,” Sabine later wrote. “He spoke with particular regret of his inability to fix geographical positions.” (http://www.lewis-clark.org/article/3189

Sabine also appears to have served as a mentor and advisor to Douglas and helped Douglas publish articles about the plants he discovered in the Linnaean Society journals, Curtis’ Botanical Magazine. These magazines were common in this period as scientists were very interested in collecting and documenting as many new species in the far parts of the world as possible as part of the era’s naturalist conservationist traditions. 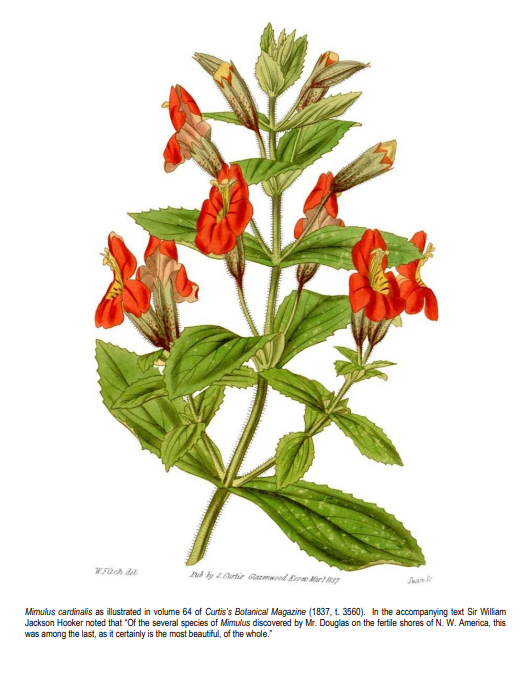 Sabines collection on Adam Matthews contains some Douglas documents. I wondered how these documents got to be included in the Sabine collection. I first thought they had been left at Fort Vancouver because Douglas used the fort as a base of operations when in Oregon during two different expeditions. I acquired further letters from Sabine from the National Archives in the UK and they revealed that Sabine and Douglas maintained their communications while Douglas was in the field. I then thought maybe Douglas left papers with Sabine in 1828 when working to understand Magnetic dip. Then, I stumbled upon a copy of some UK collections which had been sent to Canada and were in publication, a copy of which is on Google books.

The Report of Canadian Archives,  where a copy of a British correspondence collection was sent, has revealed a timeline for the transfer of the collection. (Google Books- https://tinyurl.com/y7o2n54x)

This timeline definitively proves that the collection came from Douglas’ last camp in Hawaii here he had died by falling in a bullock pit. Later I discovered in Jack Nesbitt’s books about Douglas, that there was a list of the documents sent to Great Britain and collected by John Douglas. Sabine detailed in letters that among the papers sent to him were 1 volume of field sketches, 3 papers of magnetic dip observations, and 7 papers of meteorological observations. I believe that the collection included in Adam Matthew Digital’s Age of Exploration are the field sketches and meteorological observations from Douglas.

I began searching for whether Sabine published the collection, and did find a record in his books of Magnetic dip that he did indeed publish Douglas’ readings of some locations.  in additional reports from the National Archives of the UK Sabine reorganized Douglas’ fieldnotes of magnetic dip measurements and published some of the coordinates in his book, Contributions in Terrestrial Magnetism.

However before my finding of the longtime hidden archive of Douglas documents in the Sabine collection no other researcher appears to have found this collection and attributed it to Douglas. The collection dates from Douglas’ first trip to the Northwest Coast, 1825-1826, and from his second trip to the Pacific 1830-1833. The first set of documents are hand-drawn maps determined to be drawn by Douglas in 1826 as he traveled from Fort Vancouver upriver on the Columbia. They are some 43 maps in this part of the collection. The remaining pages, up to about page 199. are some letters and notes and the bulk is his magnetic dip calculations and readings in the Willamette Valley on the Columbia, in British Columbia and in California. These measurements may lead to the finding of Tribal villages where Douglas stopped throughout his journeys.

In the next year, I will be developing this collection further, first with a series of essays and journal articles, then working to align the maps and measurements to journal entries for a larger project.

This is the second essay, the first is now hosted on the Adam Matthews site.  I will continue collaborating with them to develop the collection further, they have already been very helpful and are extremely excited about this find. I participated in the Adam Matthews’  booth at the American Library Association’s Midwinter Gathering in Seattle, WA, January 26, 2019, where I gave three presentations to the crowd about this find. That presentation is the foundation for this essay.

The Adam Matthews’ article will be published in two parts, the first is here:

The Columbia River Maps and Meteorological Calculations of David Douglas: An Archival Discovery

The second part of the article is now posted