The Catholic Indian education program was initially supported by a policy decision by the U.S. Department of War in 1819. Then the USDOW was in charge of Indian affairs and they began a Congressionally approved “civilizing fund” of $10K under the below-stated goal,

“Such associations or individuals who are already actually engaged in educating the Indians, and who may desire the cooperation of the government will report to the Department of War… In proportion to the means of the government, cooperation will be extended to such institutions as may be approved, as well in erecting their necessary buildings as in their current expenses” (Mitchell, Fredric & James W. Skelton, The Church-State Conflict in Early Indian Education, History of Education Quarterly, CUP, vol 6, no 1, 1966).

The fund, increased nearly every year, primarily went to religious schools, and churches. (It’s important to note that there were not many public schools in this period, nearly all schools were religious and had religious instruction because it was members of the church who were taught to read and who provided education to the upper class in societies. most lower-class folks never had formal education.) The sum approved by Congress for education increased to $100.000 by 1870, attributed to heavy lobbying by churches and religious orders operating religious schools for increases in support of non-secular education. Its also important to note that there was quite a lot of political in-fighting between Catholics and Protestant Churches about the fund for their schools, so much so that it may have been the wrangling that caused federal education policies to change in 1885. In 1882, an opinion came forth from the Commissioner of Indian Affairs (Ezra Hayt 1877-1880, or,  Rowland E. Trowbridge 1880-1881, Commissioners of Indian Affairs),

“I am decidedly of the opinion that a liberal encouragement by the government to all religious denominations to extend their educational and missionary operations among the Indians would be of immense benefit…. no money spent for the civilization of the Indian will return a better dividend than that spent this way” (Mitchell, Fredric & James W. Skelton, The Church-State Conflict in Early Indian Education, History of Education Quarterly, CUP, vol 6, no 1, 1966).

The opinion of the Commissioner evidently was biased by heavy lobbying of the federal government by religious orders from 1862 on, from many different religious organizations seeking to form missions at reservation and gain support from the Federal government. The history of the Catholic missions in the Northwest is well represented in this letter from L.N. ST. Onge,

What was formerly called the Territory of Oregon was inhabited by over fifty tribes of Indians, each Nation having its own language, the principal trading post was Vancouver, on the Columbia, and all the Indians gathered there in the trading season. The traders could not go to work and learn all those dialects and it was idle to think of teaching French or English to so many Indians. They did the next best thing. They took the principal words of the language spoken by the Chinooks, a large fishing tribe living on the shores of the Columbia and with a few words of French and a very small sprinkling of English adapted to the pronunciation of the Indians, they formed a jargon, barbarous it is true, but most easily learned by the Indians and answering perfectly to the purpose of commerce and familiar intercourse.

In November 1838, when two Pioneer Missionaries of the Pacific Coast. Father F [rancis]. N[orbert]. Blanchet, now Archbishop of Oregon City, and Modeste Demers, afterwards Bishop of Victoria, arrived in Vancouver, they soon mastered the jargon. They enriched and perfected it so as to enable them to speak to the Indians and numerous half-breeds.

A Catechism was made; hymns, which the Neophytes sang with great pleasure, were composed, and the Christian Prayers were translated. I have published them all in the Missionaries Companion with additions and corrections.

How small and insignificant must the dangers and the hardships of their seven months’ journey across the plains have seemed to those holy and devoted men when compared with the happiness of hearing the harmonious voices of a thousand untutored but well-disposed children of the forest murmuring those Prayers, or singing those Hymns in the Lodge of Prayer, or in the wigwams kneeling around the fire before retiring.

Bishop Demers is now in Heaven enjoying with the Apostles and St. Francis Xavier the reward of his great labors. Most Rev. F.N. Blanchet is at work yet. His brother Rt. Rev. A.M.A. Blanchet, Bishop of Nisqualy, accompanied by Very Rev. J.B.A. Brouillet, joined the Mission in 1847. They, together with some other Priests, evangelized all the Indians west of the Rocky Mountains, and north of the Old Spanish Missions of California. Hardships, exposure, famine, persecution, and dangers of all kinds, nothing was strong enough to stop their zeal. They are indefatigable. They built the first churches and schools, and the first, and for long years, the only hospitals for the Whites and Indians, for the Catholic, the Protestant, and the Heathen, and serving all for the love of God- teaching by good works.

With the scanty help of $3,500 and $2,800 a year respectively, form the funds of the Propagation of the Faith. Our Holy Bishops have managed to give us means to push in the work of salvation. They have starved themselves, they live yet in miserable shanties without any servants about them, and at the cost the work is going on yet.

Archbishop Blanchet, the Pioneer Missionary of the West, the oldest Archbishop of the United States, is yet able to fulfill the arduous duties of his position. He is over eighty years of age but still able and willing to go a long distance to celebrate Mass when one of his Priests is disabled.

The Bishop of Nisqualy, only two years younger than his venerable brother, visits yearly all Missions of his vast Diocese. Again this summer he has travelled one thousand miles by land and water, camping out and faring like the lowest of us.

What a glorious record for these two incomparable men; forty years of hard Indian Missionary life- fifty-seven and fifty-five years, respectively, of Priesthood, and over thirty years of Episcopacy! The tribute paid those Apostles by Murray in his History of the Catholic Church in this country is well deserved.

Speaking of the Oregon Mission, he says: “in 1838 the whole Territory contained only two Priests. Today, in the same field there are to be found one Archbishop, four Bishops, seventy-two Priests, one hundred and seven Churches and Chapels, four Colleges, eleven Convents, and female Academies, four Orphanages, and about one hundred and seventy-four Sisters. Such is the wonderful progress which Catholicity has made in the Mission of Oregon in little more than one-third of a century. These glorious facts speak with an eloquence which no words can enhance. They form a bright chapter in the History of the American Church. Like shining stars they cluster around the noble and venerable figure of Francis Norbert Blanchet, the Apostle of Oregon, the first Archbishop of the great West and the oldest American Prelate, who (with his saintly brother, the Bishop of Vancouver) lives to bless the Centennial Anniversary of our Independence.

“At the close of the fiscal year 1870, seventy missionaries and teachers represent the interests of the church among various tribes of Indians and were distributed as follows,” 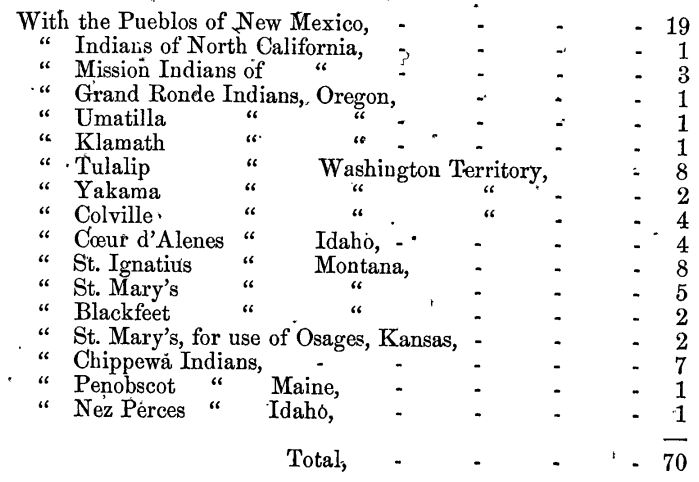 “As in contrast with the foregoing, we find that at the close of the fiscal year ending June 30, 1878, the Church had actively engaged one hundred and forty-five missionaries and teachers, many of whom were in receipt of salaries from the Government as compensation for services as teachers,” 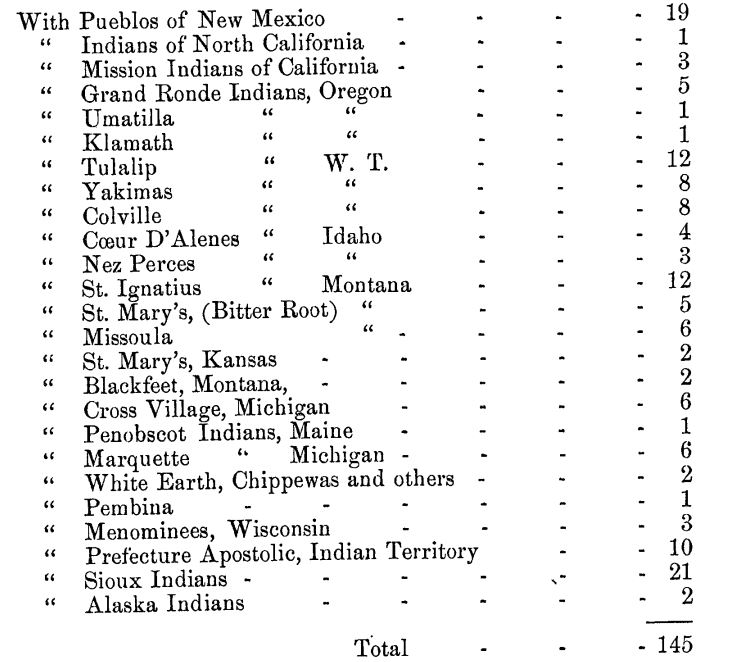 “The Bureau of Catholic Indian Missions. This Bureau was organized in January 1874, by the Most Rev. Archbishop of Baltimore, at the request of Bishops having Catholic Indians in their dioceses…. During the past year (1878) there was derived from the Government an allowance of $20.900 for the support of the schools at Tulalip. Grand Ronde, Umatilla, Colville, Flathead, Devil’s Lake and Standing Rock Agencies.” The Treasurer of the Catholic Indian Missions was Rev. J.B.A. Brouillet, an early missionary in Oregon assigned to the Walla Walla Diocese and credited with the creation of the first Catholic church in San Francisco.

However, in an abrupt turn around of policy for the Bureau of Indian Affairs, in 1885 the Commissioner’s endorsement went to sectarian schools,

“It will be the policy of the bureau, while under its present control to manage by and through its own appointees all schools which occupy buildings erected with funds furnished by the Government. The Government should manage its own schools, and the different religious denominations should manage theirs separately. in a word, in the management of schools, the Government should be divorced from sectarian influences or control. Any other course would end in heart-burning, confusion, and failure. But the Government can and does, fairly and without invidious discrimination, encourage and religious sects whose philanthropy and liberality prompts them to assist in the great work of redeeming these benighted children of nature from the darkness of their superstition and ignorance.” (Hiram Price,  1881-1885. or, John D.C. Atkins 1885-1888, Commissioners of Indian Affairs)

Hereafter, while there remained Catholic and Protestant schools on many reservations, the Federal government opted to create and operate their own off-reservation boarding schools. Chemawa Indian School in Salem, was the second such school in the nation and is still in operation today.  The Boarding school system while sectarian, were still taught within the mission school immersion model, created in Oregon first at the Willamette Mission school run by the Methodists. This model of education effectively taught western civilization culture to native students for many decades, the teachers for the schools themselves being Christians and Christian education remained the model for much of the 20th century.  Interestingly enough, boarding schools, and the process of students of many tribal cultures living together in far-removed boarding schools, are still credited with helping with the creation of Pan-Indianism and the national pow wow traditions that most people and many natives associate as Native culture today.