In 1931, the coastal tribes were in the midst of a lawsuit against the federal government. The tribes of the southern coast, between the California border and North of Coos Bay, had never been paid for their lands. The tribes signed the 1855 Coast treaty but the treaty was never […] 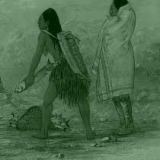 Over the course of the years  one question about the tribes of western Oregon has never been fully answered, Do the Tribal Members of the Grand Ronde and Siletz Reservations possess fishing rights? This essay offers a few case studies and a short analysis of the issue and question, that […]