In 1856, most of the tribes of western Oregon had been removed to the Grand Ronde and Coast Reservations. There were a number of tribes on the northern Oregon coast, the Tillamooks that did not remove until the 1880’s but the majority of tribes had removed. Most were first located at the Grand Ronde Indian reservation, first established as temporary until the Coast reservation was built.

Investigating this time in history is tough owing to the scarcity of resources. There are a few letter collections, and reports but really we do not know what happened to the people when they removed to the reservation. A supplemental report published in 1858 gives a lot of detail to what was happening at the reservation, on the administrative side. The details below are extraordinary in their depth of this period. 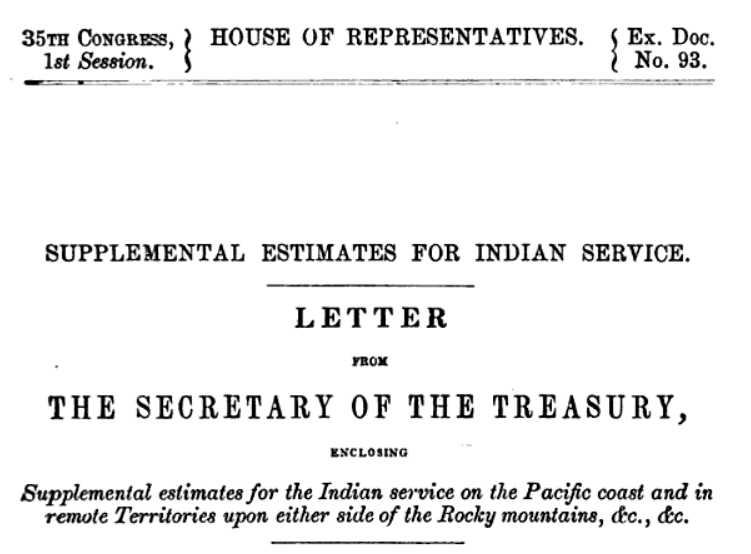 There were about 3939 Natives at both reservations and by 1857 at Grand Ronde about 500 Indians died. The Superintendent of Indian Affairs for Oregon and Washington, J.W. Nesmith was struggling with getting the funds to support the reservations. Budgets were submitted to Congress for payment of the treaties, for care and upkeep of the reservations, yet funds were slow to arrive in Salem, Oregon, where Nesmith located his office.

The picture Nesmith paints is very bleak or the tribes. The Rogue River Tribes suffered the worst, as the Grand Ronde Climate was so different from that of southern Oregon, that the majority of the 500 deaths were of these people. The Rogue River Indians referred to here were actually a confederation of people from the Athapascan, Takelma and Shasta tribes- with the true original Rogue River tribe being the Takelma Indians. Nesmith sought to save them by sending them to the Siletz Agency. If the number of deaths is accurate, then the original population may have been closer to 4439 that were originally removed to the reservations. In other letters and reports, conditions in the Coast Range at Grand Ronde were much wetter than the southern Oregon Rogue River Indians were used to, resulting in many more sicknesses, or influenza and pneumonia.

Nesmith also wrote that same year that conditions at Siletz were extreme, with little game to be hunted, a poor salmon run that year, and a lack of flour deliveries to the reservation from the contracted supplier, Fuller. The situation was so dire at Siletz that many people died of starvation over the harsh winter.

Nesmith, terribly embarrassed that funds were not being sent to feed the Indians in a timely manner, and not able to pay the various creditors in Oregon for expenses incurred under the previous Indian agent kept requesting funds throughout 1857, be paid over to feed the people.

Nesmith continued with his letter campaign and even threatened to release the Indians from the reservation if funding was not forwarded by Commissioner Mix.

Nesmith warned against a “war of economy” where the tribes would eventually go to war again, because the US could not pay for their food and upkeep as the treaties had promised.

Nesmith’s predecessors (Palmer, Hedges) had begun the process of assimilating the tribes to becoming farmers so they would grow their own food. This is perhaps the origins of the federal sustainability program for the tribes in Oregon. In Oregon the tribes learned that they would not get much support at the reservations so the survivors adopted methods of making money by becoming migrant farm-workers in the spring-summer-fall and living off the Coast Range forest for most of the time they were at the reservation. Agriculture was not sustainable at Grand Ronde as the soils are poor. Siletz valley had better soils for agriculture.

Later in 1857, Nesmith began to hear rumors that the tribes were very upset. With food a major problem and not having been paid for their treaty stipulations, the tribes began talking about going home, back to the valleys of western Oregon where they knew how to find food.  But with the whole region inundated by gold miners and settlers bent on the extermination of the tribes, this was not an option for Nesmith.  But the tribes had surrendered, Chief John’s coalition had- in 1856, under promises by Palmer that they would be cared for. What the tribes were seeing was that what the tribes had left Table Rock and gone to war against -the overt threats of extermination and genocide- were instead being carried out at the reservation through neglect and “economy”. This constituted a number of “broken promises” a problem that continued into the 20th century.

Nesmith warned again against allowing the tribes to leave the reservation as it would cause a war of “termination” between the minors and settlers and the tribes.

Even the tribes at Grand Ronde desired to go South to return to their homes, a notion which Nesmith dismissed suggesting that they will eventually abandon the idea.

Commissioner of Indian Affairs Charles Mix, in 1858 orders Nesmith to be careful with his funds in support of the Indians, but he also suggests that after careful investigations Nesmith is to pay the other liabilities. These other liabilities are the expenses invoiced by settlers and gold miners where they are claiming the tribes committed depredations on their property through raids, and thefts of cattle and horses. These expenses were incurred during the Rogue River war where the tribes sought to escape from the Table River Reservation, and ultimate genocide, and chose a paths of retribution by attacking settlements on the way to the Coast Range. The Americans appeared to deserve their money over feeding the Indians.

The past expenses, in part are the costs of removing the tribes to Grand Ronde Reservation. It is likely that with a good accounting of these past expenses we could uncover some mistakes as the government has never been good at accounting.

While payments were forthcoming in 1858, but not enough to pay all bills of the past, and the present. 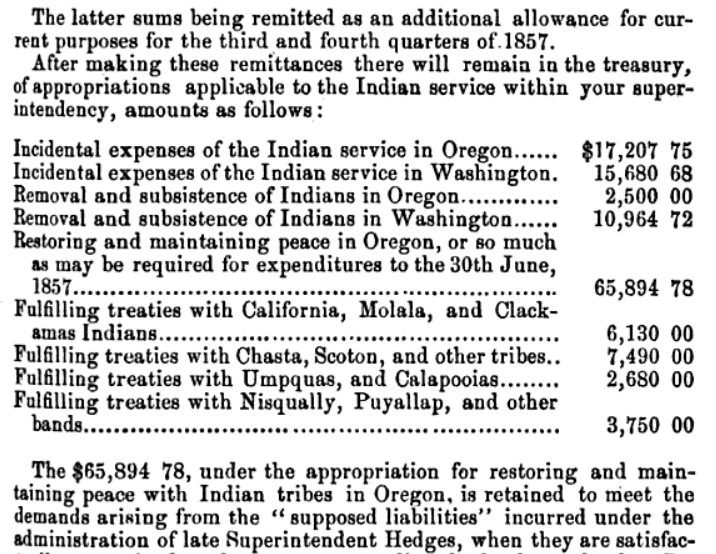 Nesmith’s embarrassment was very apparent in his reports as he decried the “dribbling sums” allocated.

Nesmith’s “feed them or fight them” reasoning appears to have struck a nerve with Commissioner Mix. He reasoned that it was cheaper to feed them than fight them.

But this may not have been the case, as with hundreds of Indians dying of disease and starvation, the cost of their upkeep was gradually (or quickly) disappearing. If they died off, they would not be able to mount an army to fight.  And Nesmith provided the accounting of the issue of feeding so many Indians. providing food for this many people for years may have been a cost that government was reluctant to pay. Could this have been a deliberate act on the part of the federal government? Could they have delayed payments hoping to lessen their overall burden on the budget

Nesmith discusses  the amount allocated as being roughly 1/7th the funding allocated as was needed to provide food for the tribes on two reservations. This issue deserves further investigation. The idea that tribes had of broken promises, that carried into the latter part of the 20th century has a lot of credence here. By delaying payments of treaty and other funds the government caused the loss of as many as one eighth of the Indians at the reservation within the first year. The tribes would continue to decline over the next half century to a low at Grand Ronde of 400 Indians at 1900. There are indications that the reservations did not receive food regularly throughout this period, nor adequate health care or medicines. Later tribal members discuss how they were pretty much left on their own in the 20th century. Much of the decline of the tribes relates to the lack of adequate resources that were to be allocated under the treaties. Interestingly, in the ethnographic studies of the 19th and early 20th centuries, there is little mention of these issues in relation to these tribes. And in fact aspects of social Darwinism crept into discussion about why the tribes were dying off. Many scientists thought it was a evolutionary competition issue, when in fact the federal government was causing the decline of the tribes in many ways.

3 thoughts on “Economic Disease, Death, and Starvation at the Western Oregon Indian Reservations in 1857”