The Molalla Indians were several tribes that lived in the foothills of the Cascade Range in the Willamette Valley. They ranged throughout the Cascades gathering berries and hunting in the mountainous environments. Many anthropologists have placed their homelands within the Cascades and have organized the tribes as North, Santiam and South, but they did not live there. The Northern Tribe lived in the foothills near Molalla, Oregon, at Dicky Prairie and ranged to the Columbia and Willamette Falls for trade and relations. The Santiam Molalla band lived at  the headwaters of the North Santiam and  south to the MacKenzie. The Southern Band lived in the foothills of the Cascades above the Umpqua Basin and ranged to the Klamath territory.

The Molalla were well connected with neighboring tribes. The Daughter of Chief Coastno (Coosta) of the Northern tribe married Chief Alquema (Joseph Hutchins) of the Santiam tribe. Molalla were known to band with Wasco and Cascade Indians in trade relations (as seen in the Cockstock affair), and some Molalla went to the Klamath Reservation in the 1860’s. The majority of Molalla people came to the Grand Ronde Indian Reservation in 1856 when Joel Palmer insisted on their removal. The Northern band is the most well known having participated in the Abiqua Battle, and having relations with the Columbia River tribes and thus part of the fur trade. Less well known are the Santiam and Southern tribes. The Santiam and Northern Bands of Molalla had 1851 proposed reservations in treaties negotiated by Anson Dart. These treaties were never ratified. They instead signed onto the Willamette Valley treaty in January 1855. The Southern Tribe was discovered late in 1855, and in December they signed a treaty with Joel Palmer, the last of the western Oregon treaties. They were removed temporarily to the Umpqua Reservation, and later went to Grand Ronde.

In 1848, six months after the Whitman Massacre, the settlers in the Willamette valley were very tense, concerned that the tribes would attack. As many of the men were gone, having volunteered for militias, the remaining settlers suffered some thefts from the Indians. The situation became much more tense when 80 Klamath Indians came into the Molalla area. The tribes were especially fearful of Dicky Miller and sought to scare him away by dressing for war and riding around making lots of noise as if they would attack. They never attacked, but instead made the settlers tense.  This situation went on for several days, with many of the settlers escaping to Dicky Miller’s homestead for protection.

The mail carried word to the surrounding settlements of the Klamaths and their actions in preparation for war, and on the second day men began arriving at Dicky Miller’s house. Don Waldo became the captain of these volunteers who sought to organize to drive the Klamaths back to their homelands. The settler militia set out to drive the Klamaths back and upon meeting them in a small prairie they began shooting. One Klamath man was thought to have been killed but other reports suggest that he simply drifted down river and survived (Mrs. Hudson).

The next day the volunteers again advanced further into the forest and began driving the Klamaths further back, with some back and forth firing of arrows and shot. The next prairie saw several Indians killed as they were backed up against a cliff. Men and women among the tribe were killed by the volunteers. The local Molalla tribe under Chief Coastno did not join the battle, siding with the settlers in their right to defend their settlements.

There is another version of the battle which was published in the History of Silverton Country.

In March 1855 Palmer found an unoccupied valley in the foothills of the Cascades which he called Crooked Finger’s Prairie (he did not name the prairie). The Prairie is a few miles SE from Scott’s Mills along Crooked Finger Creek. At the time of the creation of this reservation there were no settlers in the prairie. By 1869 there were two DLCs in the prairie, the settlements of the McCowen and Agers.  McCowen was an early Quaker family whose farm continues to today.

Notice hereby given that the Supt. Indian Affairs had taken possession of and designated the Prairie usually known as Crooked Finger’s Prairie as a temporary Reserve for the use and occupancy of the Molalla Band of Indians and all persons are warned against settling thereon or disturbing the Indians in the rights granted them on said prairie while it continues to be held as an Indian reserve. for Joel Palmer Supt. Ind. Affairs, Edward R. Geary secy. (RG75 M2 1855) 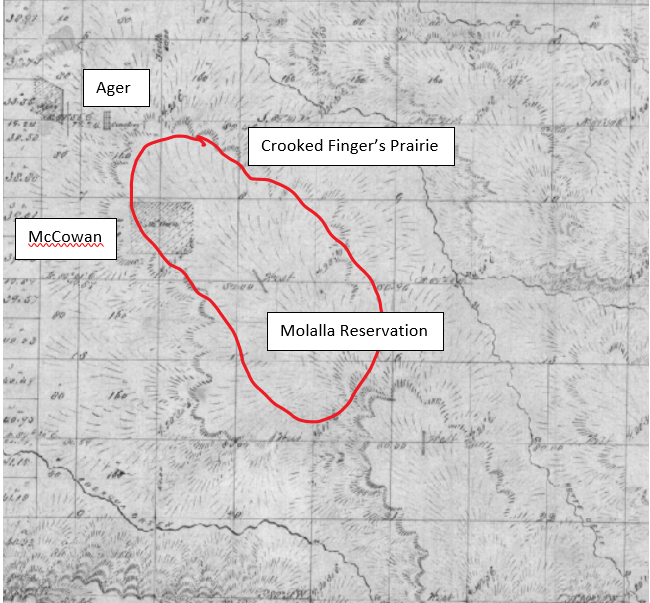 The name of the prairie originates from Chief Crooked Finger a Molalla Chief had been operating with the Klamaths to harass settlers on the mountain trails. Unfortunately not much is known of Crooked Finger and it may be that his tribe was one of the more southern Molallans. If Crooked Finger Prairie was his habitation, then he may be of the Santiam band of Molallas. In other Palmer correspondence this reservation may have been call the Abiqua Reservation, because of the location of the river north of the Prairie.

Palmer did order the tribes to Grand Ronde in April 1856 to eliminate the possibility of attacks by settlers. There is a story recorded and told in tribal lore of this meeting.

Palmer said, I will take you westwards. The chiefs said, “Why will you take us? “The treaty chief told them, “I’m assembling all the other people in the same way.“ “I’ll give you food, all kinds of food.“ “You’ll eat lots of meat.“”I’ll give you all blankets, and I’ll give shoes to the men, and likewise to the women.“”I’ll give you horses.“ “I’ll give you cattle.“”Now answer me, and I’ll take you along tomorrow.“ All the Molalla didn’t want to go. They said, “We will never leave.“ “We don’t want to give up our country.“ General Palmer brought lots of soldiers. Then now he told them, “Get ready. “The Molalla said, “We will never get ready.“ “I’ll kill you all if you don’t get ready.“ “The Molalla are ready for war now.“ They fought all evening, only half a day. Then the treaty chief sent word. “Now I’ll buy the land from you.“ Then he told them, “I’ll give you this much money.” (The sum was $46,000.) Then the Molalla agreed. Then it was all right now. Then finally now the Molalla began to get ready. (Jacobs)

The Molalla likely operated much more extensively in the Willamette Valley than previously written about. The 1855 Belden map suggests they may have owned land as far west as the Willamette River at Oregon City.

The Mat houses were likely what the Molalla constructed when they travled about their lands harvesting and hunting, while they lived in plank houses at Crooked Finger’s Prairie. The temporary reservation at the Prairie likely included the original village site and lands where they lived during some 10 months in 1855 before their removal to Grand Ronde.  The tribes were removed to Grand Ronde between February to May in 1856.  The September 1856 census has 103 Molallas under Chief Quakata on the reservation.

By 1860, another Molalla leader, Chief Yelkas (Sr.)(who had signed the treaties), was very upset that the promised food, land and resources, made by Palmer, had never been honored by the Federal Government. He left the reservation with some of his people to return to Dicky Prairie. There Henry Yelkas (Jr.) lived with his sister Molalla Kate, and became a local celebrity, accepted by the local people who called him Chief and lived the remainder of his life in Dicky Prairie.

Other Molallans under Chief Quakata remained at Grand Ronde (about 47 people) and tried to live as best they could.  In 1863 some 75 Molel people returned to the reservation. The report by Indian Agent James Condon suggests that these “Molel” were from the Mohawk area near Springfield Oregon. In this area are the upper McKenzie and Willamette rivers, with at least large tribal areas which contained some of the Kalapuya and Molalla Indians. The Peyu (Pee-you) tribe of Kalapuyans was renamed the Mohawk band of Kalapuyans by Jacobs Spores an early settler family. The Molels or Molalla in the area are noted to have been a family of mixed Molalla, Kalapuya, Klamath, Umpqua and Wasco related peoples, normally called the Tufti clan. It may be that the Molel noted in Condon’s report is this family, some Peyu Kalapuyans, and perhaps other Molalla rounded up to be returned to the Reservation.

“During the present summer about 75 Molel and Mohawk Indians have been brought from outside to this agency, having been absent about six years, and since their return, seeing the prosperous condition of their brethren here, seem content to remain.” (James Condon, Grand Ronde annual report of 1863)

As well the farmer for Grand Ronde, Joseph Sanders, had something to add, suggesting the Molel and Mohawks (Peyu) had lived on the reservation previously and were going to stay at the reservation for some time.

“I would also respectfully call your attention to the necessity of breaking more ground for the Indians (the Molels and Mohawks) whom you have lately brought to the reservation. They have been absent for a long time, the farms and patches formerly occupied by them have been taken up by other Indians, leaving them without any land. These Indians are entirely destitute of farming tools, etc. with which to prepare their ground.”

In the late 1850’s, the federal government made it Indian policy that the tribes on the reservations work to feed themselves. Despite this directive funding and resources were slow to get to the reservations in Oregon. In 1861, the chiefs at the reservation complained to the government that their Indian Agent James Condon was not helping them, and not doing his job as promised in the treaties. Quakata made this statement,

“14 men 16 women 17 children, Some have land and some have not, most have no land. Would be glad if all his people had land and would work. Have three yoke of oxen. The 1st & 2 Chief have some grain sowed. Have no seed. Have no plowed any, the oxen are not able to plow. Would plow and sow if had learn [learned how] and seed. The tribes is healthy. Have not seen anything wrong in the employees.”

In 1871, Chief Henry Yelkas Sr. (Henry Kilke) addressed a tribal gathering arranged by the Indian agents to address the Indian concerns on the Grand Ronde reservation.

“Long ago the chief said we would buy your lands. the Calico and other things, they said, we give you. We want to know about your lands. I have a wagon; I bought it. My house I got the same way. My clothes I bought; the Government never gave me any of them.  I got harness and oxen, and a plow, some years ago. I guess that was all I got for my lands. Now we want to know what we will get for our lands. We need a grist mill, harness and horses, and plows and wagons, and that is all we want.”

thanks to Chris Monsayon for additional content and clarification.