Robert Shortess married a Clatsop woman in the late 1840s in Astoria, Oregon. He had arrived in Oregon in 1839 and was active around the Willamette Valley for a few years and then settled at Astoria by 1844. He took up a land claim just south of Tongue Point along the waters edge and it is suggested that he inherited other lands and claims from his father-in-law, suggesting that his wife was of royalty. Some sites online suggest Shortess’ wife was Nez Perce, but due to the location of his land claim, and his land rights, she was more likely to be Clatsop, as stated in the majority of sources.  He was hired by Anson Dart to be the sub-Indian agent for Astoria (Indian) District in about 1850. His communiques with Dart suggest that he was sympathetic with the tribes and their rights to traditional fishing sites, and even went to bat for them against American encroachment onto tribal land claims. He suggested that many of the charges leveled at the tribes by the settlers were false, and that the Americans had no rights to level any charges against a tribe, as they had their own sovereignty. In October 1851 he is fired by Dart, to the satisfaction of Shortess. (See other essay this blog for additional details and references.)

By 1853, he was very familiar with the Clatsop Chinookan culture and languages. He likely spoke Chinook Jargon (as treaty translator) as well as Lower Chinook proper. He was in correspondence with George Gibbs, an early ethnographer, who also had a lot of interest in tribal culture and languages. The National Anthropological Archives has a field manuscript created by Shortess. The language is Lower Chinookan sprinkled with Chinook Wawa/Jargon words. The follow images are the entirety of the document, as copied for the SWORP project.

Robert Shortess NAA #287, Collected by the SWORP project in 1997 as part of SWORP 2 and digitized by the University of Oregon Special Collections division. Given to the tribes of Oregon in 2001 as part of the SWORP Potlatch 2.

The handwriting appears to be George Gibbs, he had a very distinctive style. So, it is unclear if the vocabulary was collected from Shortess or gathered by Shortess. Document notes suggest that this is a copy of the original, which was a common practice in those days. 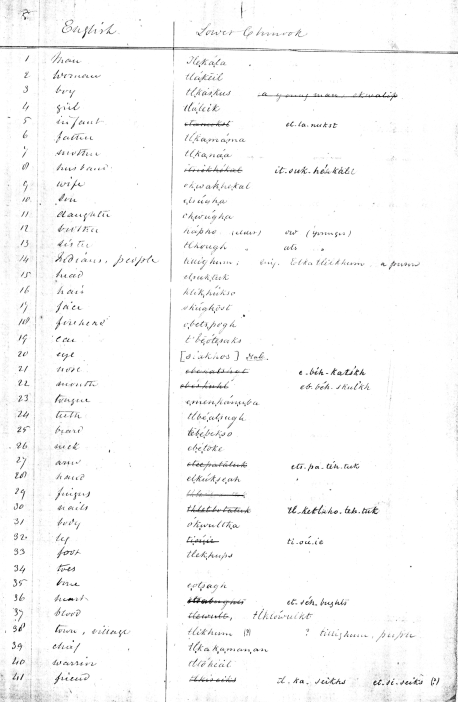 The notes end with 179 words, of Chinook Wawa and Lower Chinook words. Many more are Chinook Wawa than I have noted here. Still, amazing work for this multi-talented explorer and pioneer. One of the earliest attempts to collect a vocabulary from the Oregon tribes, and predates the “Father of American Anthropology” Franz Boas, who conducted fieldwork among the Chinookans, by some 40 years. Boas was among the Clatsop in 1890 and 1891 at Seaside (Chinook Texts). It is unclear if Boas saw this vocabulary (we assume so) even though he established the Bureau of American Ethnology (now the National Anthropological Archives) and supervised the Anthropology Division of the Smithsonian Institution well  into the 1930s.   Harrington had the original (?) of the vocabulary out (checked out of the BAE-I assume) in 1938 (Boas dies in 1942), and it was not added back into the NAA collections until 1991 (NAA database). The archival protocols practiced in the earliest days of anthropology in the United States, was a bit more liberal towards checking out original manuscripts.