Devil’s Lake is in Lincoln City, in fact it is the only such lake and state park completely contained within a city in Oregon. The lake extends along the eastern edge of Lincoln City and is defined by a ring of vacation and residential homes which ring the lake on all sides. The lake is drained by the “D” River, the shortest river in the world (self-defined) which is about 100 yards long and empties onto the main beach at Lincoln City. 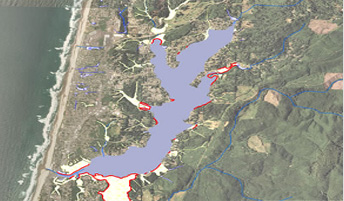 The Lake is part of a string of such lakes that line the coastline of Oregon, from the California Border to Astoria. These lakes are formed by being at the base of the western side of the Coast range from which rivers, creeks, and streams drain toward the coast. Along the coast there are extensive sand dune deposits which form a barrier at the eastern edges of many beaches, and the accumulated sand creates western barrier for these lakes. Many of the lakes on the coast drain to the north or south in long meandering streams which end at the coastal beaches and into the Pacific Ocean. Devil’s Lake simply has a much shorter distance and lesser barriers in the form of dunes.

Native tribes fished and settled around all of these lake, many were well known salmon habitat, as well as having extensive marsh plants, waterfowl, small fishes, freshwater shellfishes, and used by all manner of other species, with elk, deer and bear freshwater habitat. Devil’s Lake is part of the Salmon River ecological system and was likely owned by the Nechesne Native people. The Nechesne were a Salish speaking tribe, likely related to the Tillamook, Nehalem, Nestucca, peoples north of the Salmon River and the Siletz peoples to the south. The Salmon River itself was known as the Nechesne, named after the tribes that inhabited the banks and claimed territory along the coastal plain between the Salmon River and the Siletz territory along the Siletz river to the south.

The Nechesne peoples remained living at their villages on the Salmon River into the 1880 and 1890s. It is not well understood when they removed, if at all. The United States Indian Agents at the Coast reservation established an official encampment for removed tribes at Salmon River in 1856. Tribes like the Rogue River, Tututni, and others were removed from the southern Oregon Coast to travel through Portland, through the Grand Ronde Reservation to temporarily settle on the coast at Salmon River Encampment.  These removed tribes were settled alongside the Salmon River peoples. Then in 1857, when the Siletz Agency was built, most of these removed tribes move to the Siletz Valley to take up unofficial land claims.

In 1856, Joel Palmer sent a party of specially equipped Indians from  the newly former Grand Ronde reservation to scout a route to the Coast and to Siletz. Palmer wrote,

We are now fitting out a party of Indians, with their families, under the charge of a local agent to proceed to the coast, on a hunting and fishing excursion, portions of whom will be engaged in opening the road from the Grand Ronde purchase to the Coast, and thence to Selets river. It is expected this arrangement will familiarize them with that part of the reservation, and will enable them to obtain a sufficiency of their accustomed food, and thereby materially lessen the expenses of the government in future. (Palmer report of 5/10/1856)

In the 1860’s, the Salmon River was developed by agents of the Grand Ronde Indian Reservation, on the other side of the Coast range, as a fishery for the tribal people on the reservation. A road was built by tribal members, and it is reported that a good horseman could ride to the Salmon River Encampment in just two hours. The fishery was necessary to develop to have another food source for starving Indians on the reservation. The Federal government was not willing to pay for all of the necessary food for the people at Grand Ronde and so Indian agents had to find another source, and had to require the Native people to find their own food.

The Encampment was technically within the Coast Reservation, but because of its remote location, away from the Siletz Valley, there was a road nor an efficient way to travel to the Coast from the valley except by canoe. So the Indian Agents at Grand Ronde to the lead in managing the tribes at Salmon river well into the 1870s. In the late 1860’s, other Tillamookan tribes up the coast were influenced to remove to Salmon River to make way for white settlement of their lands. These tribes did not have a ratified treaty and so held out for years before gaining a signed treaty (not found) with Ben Simpson and other Indian agents, that they would have all of the same rights and services and housing of the people at Grand Ronde. Grand Ronde became their primary service location, and these tribes would travel overland on the road from the little Nestucca to visit the reservation for supplies and for services like visits to the doctor and the Catholic minister. There were numerous intermarriages between Native people at Grand Ronde and the Tillamookan tribes. 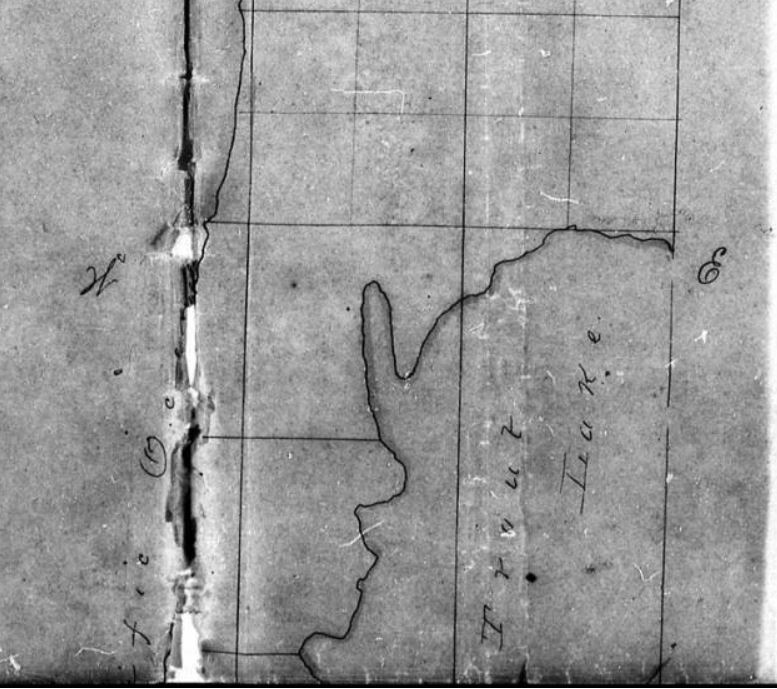 In about 1877 many of the Alsea tribal peoples were convinced to remove to the Salmon River encampment. In the 1870’s, the encampment had become a sprawling settlement community for tribal people from the coast. They were settled between the south bank of the Salmon river and along the plain to the Siletz River, a distance of about 8 miles. This community was necessary because most of not all land was claimed in the Siletz Valley by other tribal peoples, and the Agency was not received another money to pay for food for all of the 2000+ Indians. Those on the coast had no treaty and therefore no guaranteed annuity payments and so they were made to find their own food. Houses that were promised the Tillamookans and Alseans were never built and when the Alseas moved to Salmon River they became a homeless community of starving Indians. They had to move because the Alsea Reservation was terminated in 1875 and White settlers desired their lands. They home they had built up from 20 years of settlement were immediately occupied by homesteaders so they could not return.

In this time period Devil’s Lake was likely a major food resource for all of these tribal peoples. The lake was called Trout lake on at least one map. it is unclear yet when Devil’s Lake was renamed, but the first newspaper reports of the name being in 1909, immediately following the third reduction of the coast reservation lands, with the removal of the tribes from the coast, many were immediately resettled again at the much reduced Siletz Reservation.

In the decade following white settlement of the Salmon River area, the town became known at Lincoln City, and the lake renamed, possible as a tourist attraction. Around the lake was a few settler homes at first, and a large dairy farm with an attached Cheese factory. There was also a cannery.

But there was also a number of homes of people who were Native, likely members of the tribal citizens of both Grand Ronde and Siletz. Some of these homes were occupied by members of the Curl, Holmes, Hudson, Blacketer, and Logan families. Abe Logan lived at Otis just east of Devil’s Lake, and Abe Hudson lived at Devil’s Lake.

In the early 20th century, with the availability of automobiles, many car dealers began working on reasons to buy a car. One reason was that people could get out of the city and travel the countryside to see natural wonders. In the Oregonian newspaper there were numerous infomercials, stories, about various looped automotive routes people could take in their excursions.

The Tillamook and Oregon Coast became a major attraction and Highway 20 became a major tourist destination for people from the Willamette Valley, Salem and Portland.  In the 1910’s  tourism at Oregon Coast was developed, and a number of Hotels along the road from the Willamette Valley to the coast, like Rose Lodge, Devil’s Lake Hotel, the Dorchester, Otis cafe, and The Logs. The area was called the “20 Miracle Miles.” Many hotels offered luxury accommodations, large bars, and weekly dances. In fact the Grand Ronde Hotel, well inland, was likely part of the development of such tourism accommodations for weary weekend travelers.

The Lake was a key Fourth of July attraction where they held a large festival every year. There was a racetrack by the lake and boat races in the lake and well as a well attended series of fishing seasons each year. Lincoln City and its various townlets, Devil’s Lake, Neotsu, Otis, with their quaint locations for outdoor sports like fishing, hunting, and ready access the coast became major tourist attractions for thousands of vacationers every year. The area became the playground for wealthy Portlanders and many bought vacation homes on the coast.

Devil’s Lake itself has by now been heavy impacted by be the playground for Portland. Local develop has polluted the lake and water sports like skiing, etc tend to destroy sensitive species of marsh-life. The lake is also restocked with sportsmen’s fish, like bass, each year, which are invasive to native fishes.

The origin of the name of Devil’s Lake is reported by various sources to be from an Indian story about large monster that lived in the lake.  It was also noted that it was named in Chinook wawa, “Mesache Chuck,” meaning “bad or evil water” which could easily translate to Devil’s Lake.  One former resident of Devil’s Lake from the 1900s, C.M. Drake published a description of the Devil’s Lake placename.

“Knowing that the Indian Devils are are thick in an Indian country as Real Estate Developers in Corvallis. I Guess the Indians named the Lake correct.”

Devil’s Lake continues to be a tourist attraction for many. But it is exceedingly interesting for remaining a native settlement area well past when the land was terminated as a reservation. It may be that these Native families had the where-with-all to buy cheap homestead properties before other people got wind of the attractions of the lake. Or, it may be that they simply refused to remove, again. 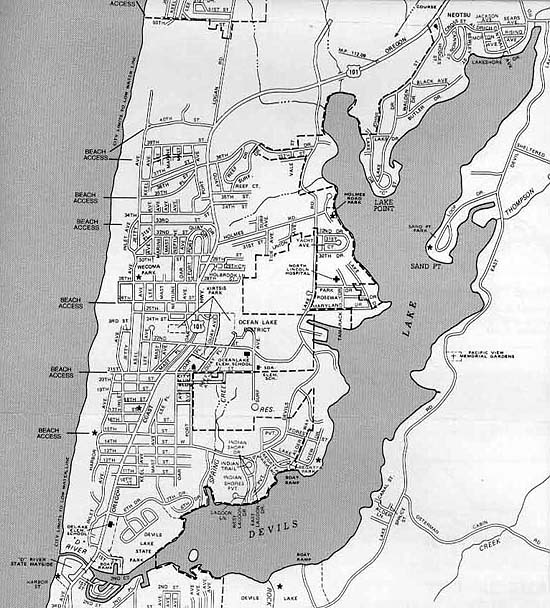