Until about 1923, all roads on the Grand Ronde Reservation were “improved roads.” They were originally trails used for horse and buggy and then later graveled and some were planked. The improved gravel roads were cheap to produce and maintain but would get muddy and worn down quickly in the winters. Native people were always fixing the roads. in about the 1880’s was installed plankroads, where wooden planks were placed in especially muddy sections so the new automobiles could navigate the thick and deep mud. Elder accounts suggest that these planks were slippery when wet, and sometimes individual planks would break, trapping a wagon or auto wheel. The neighbors would have to then come help push the wagon or later cars from the ruts when they got stuck.

In the 1860’s and 1870’s the native people helped build and maintain roads to the Oregon Coast, the Salmon River Wagon Road, the Little Nestucca road and the Sandlake road. These were developed to connect the valley communities and the coastal communities. The trail to Tillamook area was originally very treacherous and tough to navigate in the winter times. Catholic minister Rev. Crockett took the route many times and once got thrown from his horse. The Salmon River Wagon road, was originally a Elk trail that was widened to accommodate horses and wagons. This road was readily taken by the Indians to the Salmon River encampment where they would catch salmon and bring the fish back to the reservation.

The agency roads mainly went through the Agency headquarters, at the crossroads of Grand Ronde road, also called Old Grand Ronde, which was on the north side of the Grand Ronde valley. This road began in the white settlements of the Yamhill Valley and came through the flat lands to enter the reservation on the east and passed Fort Hill where the Ft. Yamhill Blockhouse and military accommodations were. This road continued on to Old Grand Ronde and eventually it was extended to the Little Nestucca river, and two roads forked from this road through the agency, the Salmon River Wagon Road and and the Sandlake road. 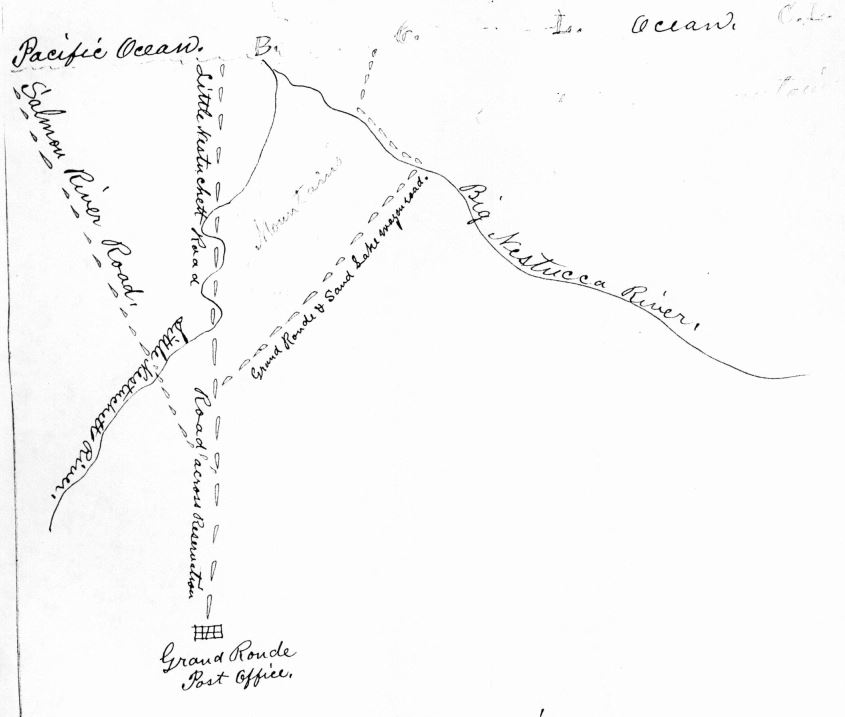 In between 1891 and 1907 the Native peoples at the reservation received their Indian allotments, and the remainder of the land was sold as surplus land. White settlers and timber companies bought numerous parcels. The majority of the timber lands were owned by timber companies who began developing entry routes into the forests for logging. Narrow gauge railroad spur lines were built such that by 1919 logging companies were taking timber from the coast range down to the many mills, and developing timber towns, like Valsetz.

During this same time the roads through the reservation came under the control of the state of Oregon as they began developing the State Highway system. This system needed to be developed because of the invention of the automobile and its subsequent mass production (aka: Henry Ford), and ready availability in cities like Portland and Salem. With automobiles like the Model T, came tourism development in Oregon where car companies and began working with newspapers like the Oregonian  to develop a series of auto tourism routes, looped routes with impressive sites and natural wonders that could be visited in just a few days, or over a weekend. One of these routes was  down the Salmon River highway to Lincoln City, then north to Tillamook, then back through Grand Ronde. Families would auto camp along the way or stay in the rapidly developing series of hotels near the attractions. The Oregon coast was an attraction with many natural wonders, but in small towns were developed tourism sites, downtowns with curio an trinket shops, dance halls, and entertainment destinations like the 4th of July fireworks display at Devils Lake. 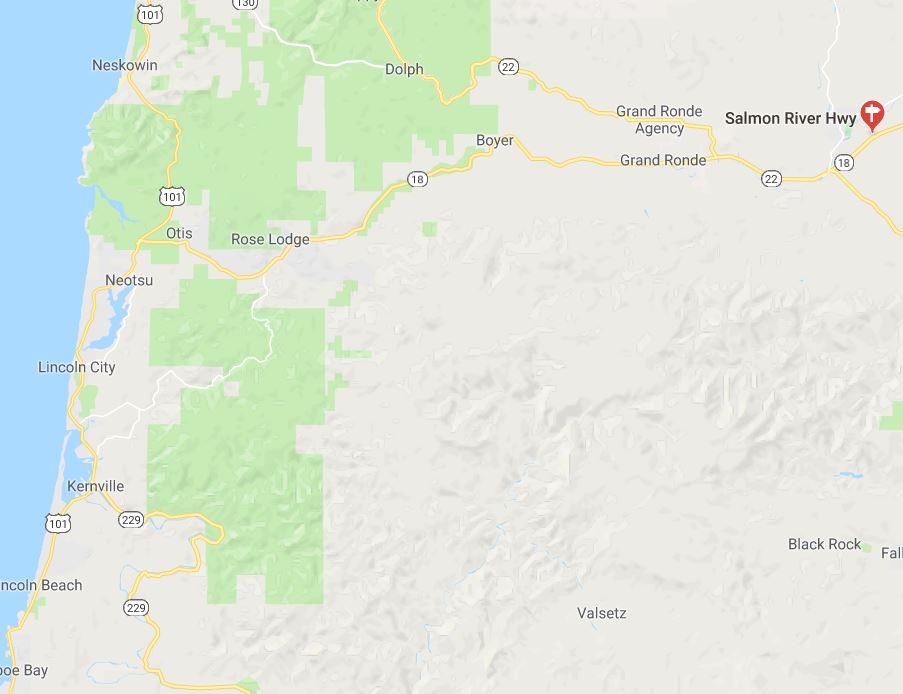 The Oregon State Highway Commission began in 1913 and by 1917 was making plans for developing the Salmon River Highway with orders to survey the route. Planning continued until 1923 when bids began coming in from contractors for various sections of the highway from the Yamhill Valley to Siletz River. To complete the route the highway route, roads through the reservation were paved, with the help of federal funding.  By 1932, the majority of the Highway was completed, with only small sections needing to be graded near Otis. In 1932 the Commission decided that the junction of Grand Ronde Road and the new Salmon River Highway would have a stop sign. By 1933 the road was complete, the new route of the highway followed the natural gradual slope on the south-side of the valley up into the Coast Range, which changed the route of the original wagon road significantly. No longer did the road follow the elk trail over the hill, but instead forked into two directions at Fort Hill. This became the basic  road system that the valley has today. Sections of the old salmon river wagon road are still discernible across the lightly settled valley, passing Fort Yamhill state park, and in some of the forest roads along the ridges west of Grand Ronde agency (Or. State LIDAR maps reveal many of these sections).

The Salmon River Highway was dedicated in about 1932, having been developed with funds from four counties, Polk, Yamhill, Tillamook, and Lincoln, the State Forest system, and the Federal government, because of the overlapping land claims. The original surface of the road was tar macadam (John McAdam’s method + new tar development), a technique developed in about 1902 which laid a hard tar infused cement surface over the native rock ground cover.  It is now one of the primary State Highways, Highway 18, The Salmon River Highway.