The Clackamas (Tlakamas) lived along the Clackamas River and along the lower Willamette. Their villages and associated territorial claims extended from Willamette Falls to the Willamette Slough. Scholars still debate the full reach of the Clackamas territory. At Willamette Falls there were villages on both sides of the river below the falls, one village above the Falls at Canemah and one village down by where the Tualatin River enters the Willamette. There were additional villages near the Clackamas estuary and at Milwaukee. There was a village on an island in the Willamette. Some of these villages at the falls are addressed as Clowewalla as well. The reality is that Clackamas was not one tribal nation, but a number of powerful chiefs who held power over their individual districts. These chiefs were all interrelated by marriage and shared the same culture. The chiefs and other leaders chose to band together to make a powerful Clackamas nation. The strength of the nation was built upon the interrelations between the Clackamas peoples and their kin within other tribes, like the Cascades, Wappato, and Kalapuyans.

In 2014, there was published Chinookan peoples of the Lower Columbia (CPLC) edited by Robert Boyd et al. In the book are a number of chapters about the lower Chinookan peoples and one chapter addresses the Clackamas and Cascades (edited by David Lewis. with sections written by David Lewis, Eirik Thorsgard, and Chuck Williams), all descendants of these peoples. Along with the CPLC book, there is an online set of additional essays and tables available through PSU. One table is a list of the Chinookan villages, of which only one is listed as Clackamas. The Willamette Falls villages likely were of the Clackamas Nation as well. 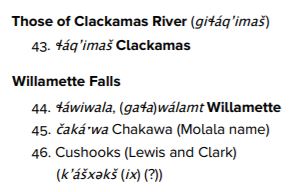 In a conversation with Robert Boyd, he stated that there was a decision to place villages on the list if there were several verified references. However, in doing so, several villages were left off the list which was Clackamas. Why there are no other references to them, we don’t know, perhaps these Clackamas river villages were small and there was not a lot of research on the upper Clackamas, but many of the upriver villages were likely seasonal fishing camps, root gathering camps with smaller year-round populations of Native people. Certainly, by the time most ethnographic records are being created, most of these villages are gone, their peoples having died through the malaria epidemics of the 1830s. In the right season, these smaller villages would swell to accommodate a larger population of seasonal immigrants after a few specialized resources. The people who remained there year-round would maintain the area for the annual gathering, fishing, and hunting camps. This is perhaps a new concept of what the seasonal camps may have actually been. Many were not fully abandoned and were outposts of the main villages which would swell during resource-rich seasons to accommodate more people. Then there would be greater opportunity to trade, arrange marriages. The permanent population of the camps may grow over time to eventually become independent.

Of issue with leaving these smaller and less well-known villages off of the larger Chinookan list, is the mistaken impression to readers that there were fewer Clackamas villages than there actually were, and that there were no villages in important areas like the Portland downtown area. Although, reading a bit through the notes of CPLC and there is a reference to David Ellis’ Cultural Geography article in the same online database at the PSU anthropology department. David Ellis’ more comprehensive list includes the other Clackamas villages. At some point, it would be good to make one comprehensive list and add to the list when additional sites are found.

Specific details of the Drucker village names and locations are still not included in the Boyd and Ellis lists. As well there are comments made in the Boyd et al. article about Drucker’s transliteration is not to be trusted, but no explanation in the article why this is the case. In my research experience there are individuals who have been labeled as untrustworthy, like Albert Gatschet, and now Phil Drucker, which seems to represent a mainly linguistic bias. Many linguists appear to poo-poo many of those who collect information in the earliest years of anthropology, before modern linguistics as science was formed. It would be better if the scholars who state their opinions through their research, and show how some of the information from the previous researchers cannot be trusted, rather than their personal opinions.

In addition, the CPLC book appears biased towards a regional theory of Chinookans, as if they are all one large tribe. There is a discussion of upper Columbia, and lower Columbia differences, but the majority of discussions tend to gloss all of the lower-middle Chinookans into the same cultural category. There are reasons for this. It is more expedient to address all of the tribes as culturally the same, then its not necessary to address each tribe comprehensively. For the Clackamas, there is rare early ethnographic data of the tribe. A few travel journals, Parker, Slacum, a few others, but no early ethnography. Drucker and Jacobs begin their research in the 1920s, which is very late for this region. Perhaps Boas is the outlier, or the rest have not been well looked at.

Melville Jacobs sets the pattern of addressing the Chinookans as one large ethnographic group in his “Content and Style of Clackamas Oral Histories”, “The cluster of hamlets and villages which spoke the Clackamas dialect is about as poorly known as other Chinook groups, and it is much too late to add to our crumbs of information, except for the upriver informants who are available today to Drs. David and Katherine French. Clackamas settlements were along the Willamette River from Portland to Oregon City and up the Clackamas River which empties into the Willamette between those modern cities. Clackamas had a society and culture cannot now be distinguished from other Chinooks except for items of linguistic and folkloristic kinds.” (Jacobs 9)

I differ with Jacobs in this regard. Tribes today have proven to have maintained their cultural traditions. There is a tendency to glom all of the Chinookan people into one category, but there are Clackamas people, descendants, who are working to understand what it means to be Clackamas as a unique identity and have ferreted out good reliable information about their people which distinguishes themselves from other Chinookans. Jacobs’s theory suggests a direct relationship with the Boasians who saw the unspoiled Natives who speak their languages and are unsullied by western civilization as true cultural natives. This early cultural bias and scholarly bias detracted from their studies. This bias also limited their research so that they did not study much of the cultural changes happening around them with native people on reservations experiencing active colonization, including the losses of land, culture, languages, while their children were forced into boarding schools. Today’s Clackamas descendants and allies now work to understand their history and survive in spite of it.

In communications with organizations in Portland, many times I am asked where Indian villages may have been in Portland. Because I was using the CPLC online list, there do not appear to be villages in Portland. I have stated this and stated that the only known villages are one at Blue Lake, a possible fishing village which Clark saw in 1806 on the Willamette (the St. Johns village?), and those at Sauvie Island. However, this is incorrect, according to at least one reference, there are villages noted in Philip Drucker’s notes (4516 78 &82). I have now gone through his notes and compiled a list of the other villages that did not make the CPLC list. Some of the listed villages at not Clackamas.

The listed fishing villages, to me, are permanent villages. Many anthropologists may debate this, based on their seasonal use. However, when such villages are used for hundreds if not thousands of years, occupied by generations of the tribe for a very long time, and is then named, the village is then considered permanent within the culture. I think anthropologists need to reevaluate how they assign permanence and impermanence when assigning values to tribal culture.

Note that the one Kalapuyan village mentioned “Hantciyug” is likely the better-known version of the name Champoeg or perhaps Ahantchuyuk. In light of this, Champoeg and Ahanchuyuk may be related words.

I produced a couple maps based on the placenames of John Wacheno as listed in Drucker.

There appears in Drucker a small concentration of the Wexsun people (perhaps Wakanasissi?). They apparently had three towns and may have been the downriver subset of the Clackamas people. They would be considered the main tribe of the Portland metro area.

These villages are of the Clackamas people. They extend somewhat above the falls and well up the Clackamas River and Eagle Creek. The Eagle Creek village locations were too ambiguous to place on the map. The Clackamas’ main village of Gauwu Hai Pat can be easily located as it was on the 1852 GLO map. This village is likely that sole Clackamas village on the CPLC list. 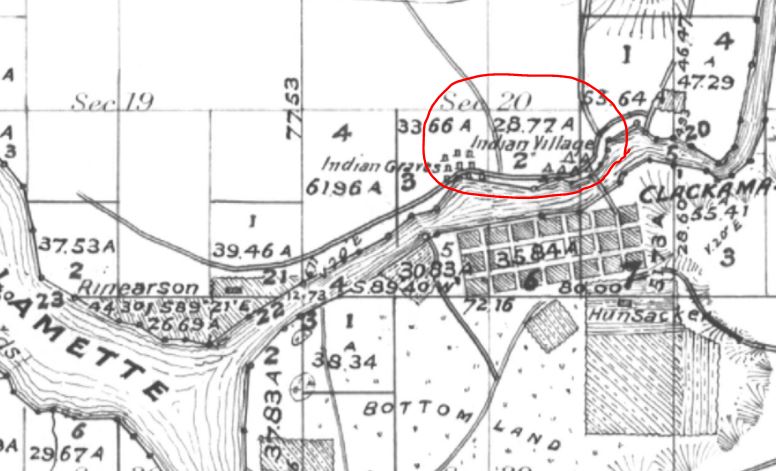 It is likely that the village of Gauwu Hai Pat was that described in Joel Palmer’s journal.

…we put up at Mr. Hatche’s having spent just one month in the Cascade Mountains. This morning we left Hatche’s and in two miles travel we reached the Clackamas River. At this point it is one hundred and fifty yards wide, the banks of gentle descent, the water wending its way for the noble Columbia over a pebbly bottom. Here is a village of about twenty families, inhabited by the Clackamas Indians, who are few in number, apparently harmless and caring for nothing more than a few fish, a little game, or such subsistence as is barely sufficient to support life. There are but two or three houses in the village; they are made by setting up side and centre posts in the ground, the latter being the lightest, to receive a long pole to uphold puncheons split of cedar, which form the covering; The sides are enclosed with the same material, in an upright position. These puncheons are held to their places by leather thongs, fastened around them to the poles that lay upon the posts. After examining the little community, the remains of a once powerful and warlike people, we obtained the use of their canoe, crossed over the river… (Palmer, Joel. Travels over the Rocky Mountains, 1847, 74-75).

This essay only addresses the villages in the Drucker notes. Other sources will be considered in additional essays. But now our understandings of the Clackamas are much greater and we can now see how extensive this nation was in the Portland metro region, with perhaps sub-tribal groups at Portland, on the Clackamas, and at Willamette Falls.

This essay is one of discovery. There are likely mistakes and errors of judgment in it. I will make mistakes in the transliteration of the tribal words. My mission here is to reveal some of the ethnography which is not normally available to the readers. I am not the first, but I do try to work in an accessible format for the public. I will also step on a few toes. There are those who are well-endowed scholars of the Chinookans who know the subjects more than I. But I do bring a different perspective and perhaps can note a few new details that have not been noted by those working more centrally on Chinookan contexts. The culture is after all part of my heritage.