As a spy in the Oregon Territory, and a Navy man, William A. Slacum was tasked with documenting the possessions of the British, but he also worked extensively to learn where the tribes were located. A map, Chart of the Columbia River, was created from his field sketches and survey notes from 1837, which tracks some 90 miles of the Columbia River. 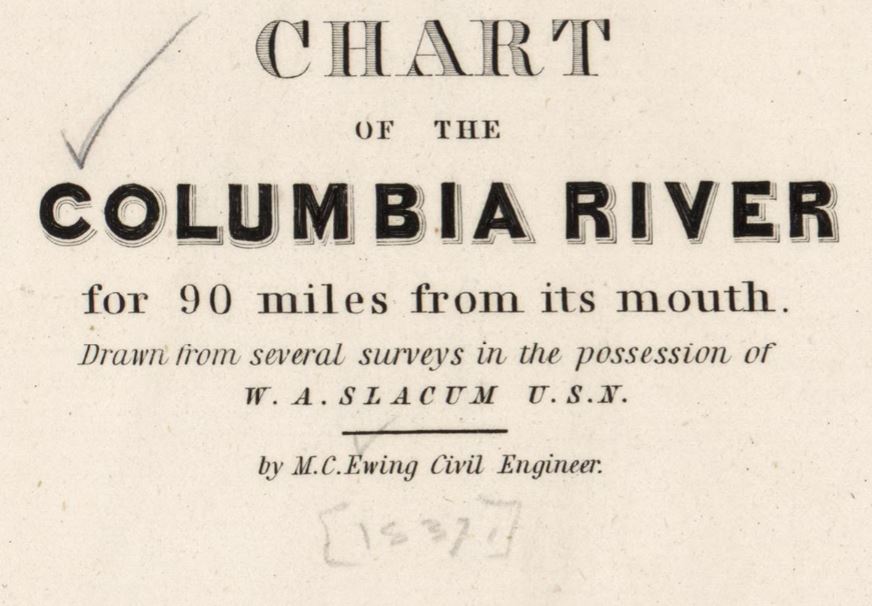 On the map is located a number of Native villages of the principal tribes of the Chinookan peoples.

Kiesno is now the conventional spelling of this chief’s name. His is reported to have a principal village near St. Helens on the south side, and had the allegiance of the peoples on Wapato Island (Sauvie Island) and those on the north side of the river, all now normally referred to as the Multnomah. By 1837 when Slacum was in Oregon, the tribes has just gone though a dramatic die-off from the 1829-35 malaria. So the number of villages would be much reduced in 1837. For comparison look at the number of villages noted by the Lewis and Clark Expedition in 1805-1806 on their hand-drawn map.

Kiesno then likely moved to the north bank to be closer to his main source of income at Fort Vancouver, where he was the head chief of the native laborer’s camp, normally called now Kanaka village (Kanaka means Kanaka Maoli meaning Hawai’ian, owing to the numbers of Hawai’ians hired by HBC to be laborers in the fur trade.). Kiesno dies in 1848.

The word “Wilhamet” is an early version of Willamette, beginning to be applied to the Willamette River and Willamette Valley. The earliest name assigned the river by white explorers was “Multnomah” by William Clark in 1806, who traveled about 10 miles up the river. The tribes would normally call the river versions of “big water,” in Chinookan-proper Wimahl and in Sahaptin Nch’i-Wàna.

The Hudson’s Bay Company’s Fort Vancouver was at this time the largest town in the Oregon Territory with some 800 people in all working in and around the fort, in the fur trade, and dairy farming, and agriculture. Wapato Island was a big dairy ranch for the HBC.

This is likely to be a Skillute (Skilloot) village of perhaps Cooniak on the south side of the river. Oak Point is also the most northwestern point on the western boundary of the Willamette Valley treaty of 1855. Cooniak would be the sole surviving Skillute village due to the diseases which may have not completely ended by 1835. The Skillute and their neighbors the Clatskanie, an athapaskan speaking tribe who occupied the hills and mountain of the inland areas between the Columbia and the Tillamook region, moved to the temporary Indian reservation at Milton-St. Helens in about 1855, to be again removed to the Grand Ronde Indian reservation in 1856.

Noted are the villages of “Scummaquea”, “Pillar Rock”, “Gray’s”  which were noted Central Chinookan villages, some associated with the Cathlamet peoples. These are the peoples today who are struggling to become re-recognized by the Bureau of Indian Affairs, they were recognized in 2000, to be terminated again by Pres. G.W. Bush in 2001. They have led an effort, as the Chinook Nation, to be recognized, for some 40 years or more.

The Clatsop peoples, another Chinookan tribe, living in this area of the Columbia. They had villages north and south of the river. Chief Comcomley’s main village was a Point Adams. North is Chenamus village, a relative to Comcomley, and there is also the Chenook village. These are well-known villages of the Clatsop Chinook nation.

There is more to be said, but for now just enjoy this map from the Library of Congress. Now to find the original surveys of Slacum. 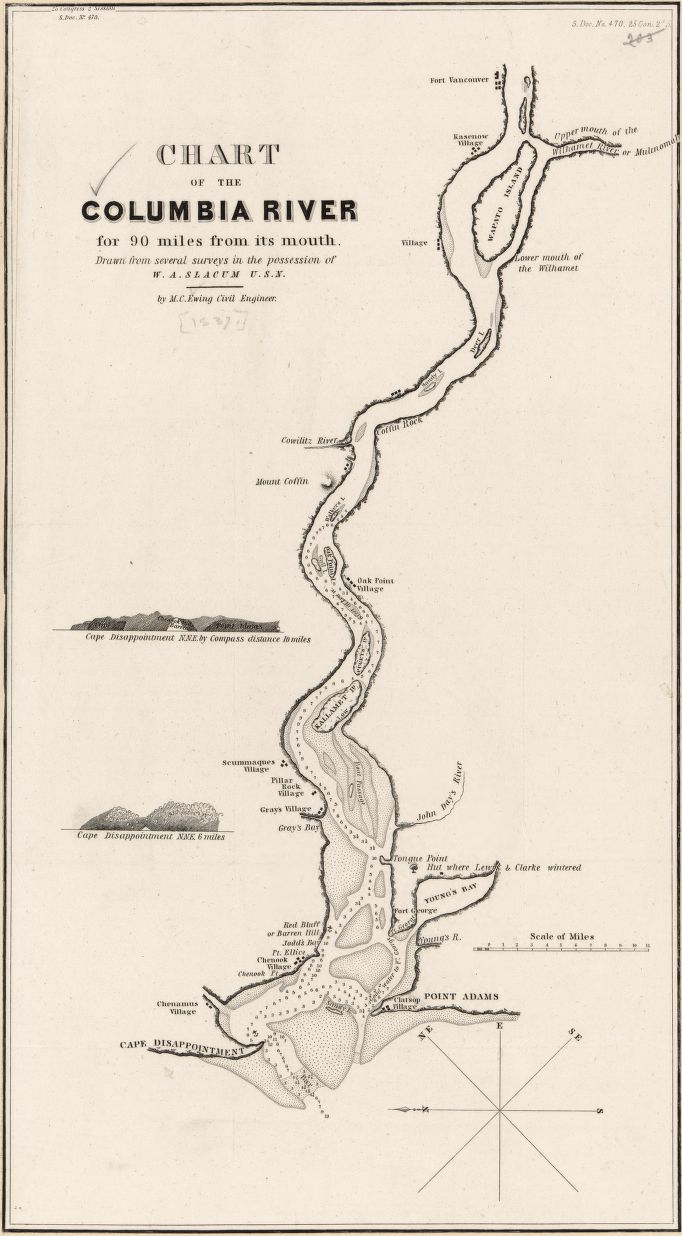