As noted by Dr. Mark Tveskov in his 2017 article “A “Most Disastrous” Affair: The Battle of Hungry Hill, Historical Memory, and the Rogue River War” (OHQ Vol. 118, no. 1- find the full text on Academia.com) the battle was one of the most famous for Oregon and perhaps the most disastrous for the Oregon Territorial volunteer militia troops. Tveskov tracked down many accounts for his narrative from newspapers and military sources and was able to show how the descriptions of the battle were altered by some of the narrators. Tveskov remarks that it is likely the case that the story of the battle when altered was done so to cover up the reasons for the loss, the fact that they had been beaten by a native woman, “Queen Mary” or “Indian Mary” who was an obvious general on the side of the Takelmas in the battle. Instead, some accounts suggested they were beaten by Tyee John, the leader of the Rogue River Confederacy, a noted battlefield general who lost the battle of Big Bend in 1856, but was much admired for his tactics. Tyee John, however, was not at the battle of Hungry Hill.

Tveskov also noted that there were few accounts from Natives of the battle. George Wasson Jr., a font of much knowledge of SW Oregon, had an account, which noted correctly that the battle was generaled by Indian Mary and this was significant to the history of S.W, Oregon. The notion of Native women beating white men at war was not an acceptable narrative to most early Oregon historians who wrote the much-mythologized history of the beatific colonization of Oregon. In fact, such a history would be downright embarrassing for the white men involved. But, it appears that this is absolutely the case and points to another situation where native people’s perspectives on their history were ignored by historians in favor of white perspectives as a way to aggrandize themselves and their kin.

Tveskov, in his research, worked closely with historians and archaeologists from the Siletz and Grand Ronde as both tribes relate to this history. Robert Kentta, the renowned historian of the Siletz tribe, and one of their council people, contributed an account from Frances Johnson, one of the last of the original Takelma people alive well into the 20th century. These perspectives enlivened the battle narrative with more details and an appropriate multivocal description of the events. Such is the case with historic events, as time passes more information gets revealed through archives and personal collections than had been available previously. Tveskov on his part did not ignore native perspectives as had many historians previously.

Along these lines, there is one more native account which I came upon by chance in the J.P. Harrington Collection, Reel 28. Harrington interviewed Frances Johnson and Molly Orton, Takelma and Latgawa (Takelma) people at Siletz and a few other individuals, and then took Frances and Molly on a tour in 1933 of their former homelands, the area from Cow Creek to Ashland, in order to elicit more details about placenames and other accounts within the Takelma language. Taking cultural experts on such tours is a valuable technique to help them recall events any details from their past that may be immersed in their subconscious. Harrington’s notes of the account are briefly,-and somewhat messily- taken down when the trio was traveling through the Cow Creek-Canyonville area. During the trip, Johnson does elicit slightly more information about Hungry Hill, knowledge of the battle, and who participated than was previously mentioned in the Tveskov essay.

The accounts from Frances takes place over several pages of Harrington’s notes. Harrington was mostly after identifying placenames in the Takelma language and so unless his informants volunteered stories and other details Harrington does not appear to have asked much else. As the notes proceed we see Harrington returning to some places and checking placenames, while they drive about the countryside between the Coiw Creek Valley and the Rogue River valley. Initially, the conversation appears to take place along the Pacific Highway, essentially Hwy 99 today, much of it along the same route as the Applegate Trail. The Applegate Trail was one of the immigration routes into Oregon, from the south and it was identified by members of the Applegate family who were surveyors. It is likely that the trail was made up of in part the original Indian trails and trade routes through the Siskiyous.

Note that now we have a placename, assuming its the same Hungry Hill, which appears to have been well known enough to have a name, a known place to get roots at the bottom of the hill. There is a chief mentioned in Frances Johnson’s family, Hak’welsamen, very similar name and I wonder if he was related to this site somehow?

K’wels= roots of ya-l tree used for basketry. But at Siletz they use merely spruceroots. Put the roots in the sun & they get red gent-a’. Says no, when I ask if Saltchuck Inds. [Coastal Indians] live there.

The Hungry Hill that Mr. George Baker went to is betw. Chetco River & Illinois river, Inf, knows the Chetco River – The Saltchuck Inds. live there- all the Salchuck Indians talk the same language.

Chg. a place way down Cow Ck in the Mts. I don’t know how many miles. Soldiers & Inds. had a big fight at ? [have not figured out this yet, think its a person] & only killed one Ind.

This appears to be the Hungry Hill Battle, and killing only one Indian is a detail that was not written about before. halfway between Glendale & the mouth of Cow Ck. ?

John Adams, an Ind. got killed a little down ck. of Wolf Ck. town, in flat there.

Maybe the one Indian killed during the battle as the second day the battle continued somewhat down the hill. This appears to not be the Hungry Hill death, but may be somewhat related.

Dan Robinson’s grandmother got killed in the war on the hill s. of Cow Ck. bridge & a white man named Jimmie Tukhit? got Cow ck. // little daughter. That girl later came to Siletz & Frances’ mother recognized her. That girl married a white man ev. for her children were halfbreeds. Dan Roberson is son of that girl raised. Jimmie Tar-kit was bachelor & he later passed the girl to other white men & she arrived at Siletz with 2 halfbreed children & one was Dan Roberson.

Here the placename may be associated with a harvestable resource, Alderwood with high pitch content. 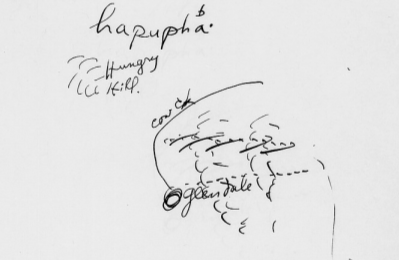 Hungry Hill here has a different name than that on page 563. It is likely that this hill did not have a name, perhaps not prominent enough. Looking through the names of places, villages, creeks, and rivers the names usually reflect some resources in that location, something that was harvested. Naming for these Takelma speakers was about the foods and harvestable plants that were available seasonally. Tak’welsaman meant “on top of some roots” suggesting a root digging location, ie: root camp. So Hapupha may be a placename for a specific location at or near the hill.

Hapupha’ a big field, a place downstream of Haswi-kh, east (where the sun comes up) from haswi-kh. There is a big mt. at hapupha’, & another mt. on the other side. Both places are in the Umpqua drainage.

Hapupha’ here it is mapped as between Canyonville and a Rock House, which is a cave. The Rock House was noted as being near the S. Umpqua and a great place to capture eels. Searching for known caves in the vicinity and I did not find a conclusive match. Canyonville has a name Te-kan, and reading further we find other names for fields in and around Canyonville and at least one village. Willamette side is essentially the northside of the valley.

Camass Valley is north of the Cow Creek valley, in the Umpqua Valley.

Hak’welsamana’ ta’ana : Mg. chief from k’wels. Pinetree roots for basketry; Hak’welsaman had a son baby in the basket yet, when he bought Frances sister.

This is the second time Hungry hill is associated as having an open flat on top, suggesting this was a known locality, then the alder association (hapopha) suggests this is where the people would get good alder wood. the open area of the top could have other significance too if tribal people used the tops of these locations for signal fires for area communications, as had occurred in many locations in the region.

The information presented is somewhat sketchy, not a full account at all. I wonder what would be found if a linguist looks at the words. But it is apparent that the area of Hungry hill may have had two place-names, based on known resource gathering locations. That one Indian man died in the battle of Hungry Hill and that the battle was also known by the tribes in the area. There are more notes about the trails and known locations in the vicinity suggesting these are the places that would have been stopped at by the Takelmas before and after the battle. More field studies of the exact locations of these place-names are warranted. Then the place-names themselves adds significant information and context to the original American accounts of the battle and area.

The fact that the Takelma forces knew the location well and knew they could withstand a significantly larger force of Americans there speaks volumes about the traditional knowledge of the tribes engaged in a battle for their lands and rights. Then the fact that a woman, Indian Mary, Queen Mary, may have led all or part of the battle suggests this story is an important story of heroism and survival of the tribes of southern Oregon.

Note I am not a linguist so my transcriptions need to be gone over with a linguist who understands Harrington’s handwriting. There are likely mistakes in the transcriptions. For full disclosure, I am a descendant of the Takelma peoples of southern Oregon. My six-generations-ago grandmother Hattie Sands had relatives within the Takelma people of the Rogue Valley and within the Cow Creek people, who were also Takelma language speakers, perhaps they should be thought of as northern Takelmans. It is clear from Frances Johnson’s accounts that she knew a lot about both the events and place-names in the Cow Creek drainage as well as lots of names and events in the Rogue River valley, suggesting a connection to both locations as well. My intention is not to favor a contemporary tribe but to reveal the history as best as possible from available resources. History is a funny thing, we work to recreate events in the past but many times what we create is another version of the past, normally a version that never existed. In many ways, history writing is fictionalizing a true story with limited details.

All of the Harrington notes are from reel 28.

3 thoughts on “Native Details of the Battle of Hungry Hill”