Information about the inner lives of the tribes in the 1860s is very sparse. A few federal reports exist but not a whole lot of information about the lives of the tribes besides a few complaints and details about food supplies and weather. But a few years ago a document surfaced at the Oregon Historical Society library that we call the Pass Book. The book is a ledger that is in the Confederated Tribes of Siletz Collection. I was teaching at PSU in 2011 in the evening and decided to visit the archives in the hours before my class.  The collection turned out to be a treasure trove of information about the Grand Ronde tribe because about half of the documents were about the Grand Ronde Indian Reservation. I figured out that the collection then was likely the remainder of the documents left at the Grand Ronde-Siletz agency office in Siletz. Apparently, when they closed the office to move it to Portland, some documents were left behind and people at Siletz ended up with them. They were donated to the OHS library in the 1960s, it is assumed. There are a number of notebooks and ledgers in the collection, as well as court records. The original GR cemetery book is in the collection as well as the original GR allotment book.

The Pass Book is the third and perhaps most important and most revealing ledger in the collection. It is a large ledger with some copies of agency reports from the 1860s and 1870s. There are also some lists of supplies given to Indians at Grand Ronde, an undated census, some GR court records, and the bulk of the contents of the book are about 10 years of logged passes given to Indians to be able to leave the reservation, legally. It was illegal by federal laws for Indians to leave the reservation as natives were not citizens of the U.S. They did not become citizens until 1924, for most, when the Indian Citizenship Act was passed by Congress. So passes were necessary to be carried at all times or natives would be subject to arrest. The ledger documents the names, tribal affiliation, and destination, and return of the people, as well as how long they were gone.

Some of the apparent random notes in the ledger appear to be out of chronological order as notes from the 1870s sometimes bracket notes from the 1880s in the ledger. So the Pass Book really needs to be analyzed understanding this and trying to place information in the right period because not all notes are dated. The dates generally run from 1861 to 1882 for all contents.

One set of pages is a documentation of the voting in of Wapato Dave Yachkawa as the Tualatin chief in 1864. Dave was a well known native leader at the reservation for many years. He signed the Willamette Valley Treaty in 1855 and was with the Tualatins when they removed to Grand Ronde. The voting in of Dave is interesting because normally Chiefs of tribes are assumed to not have been appointed in a democratic process. Instead, many scholars have assumed that chiefs were given their title as an inheritance and that high born men would someday become leaders of the tribes. Certainly in this case his status may have been a factor. As well it is assumed that there was not much need for native leadership at the reservation. Scholars have questioned whether the tribes even maintained their separate tribal identities or whether the people from some 27 to 35 tribes at the reservation simply all became just individuals in the community and the Indian agents just told them what to do. But it clear that the traditional leaders of the tribes maintained much of their power in the Grand Ronde Reservation and in most cases that would be responsible to the Indian agent to dole out resources to their people, meaning the people of their tribe. So they became intermediaries to the Indian agents. But it is as yet unclear whether voting for tribal chief was the way chiefs were situated as chiefs previous to the reservation. Some sources suggest this is so, that leaders were “raised up” by the people to become their leaders. But there are cases, such as those of the last three chiefs of the Clackamas and Clowewalla tribes, being the sons of the Cascades chief Tamakuin, which raises eyebrows, as we really do not have clarity about what is the process in that case.

Still, by 1864, the Tualatin men are voting in Wapato Dave Yachkawa as chief of the Tualatin tribe, for a period of 4 years. This seems very similar to the election of presidents in the U.S., for periods of four years at a time. 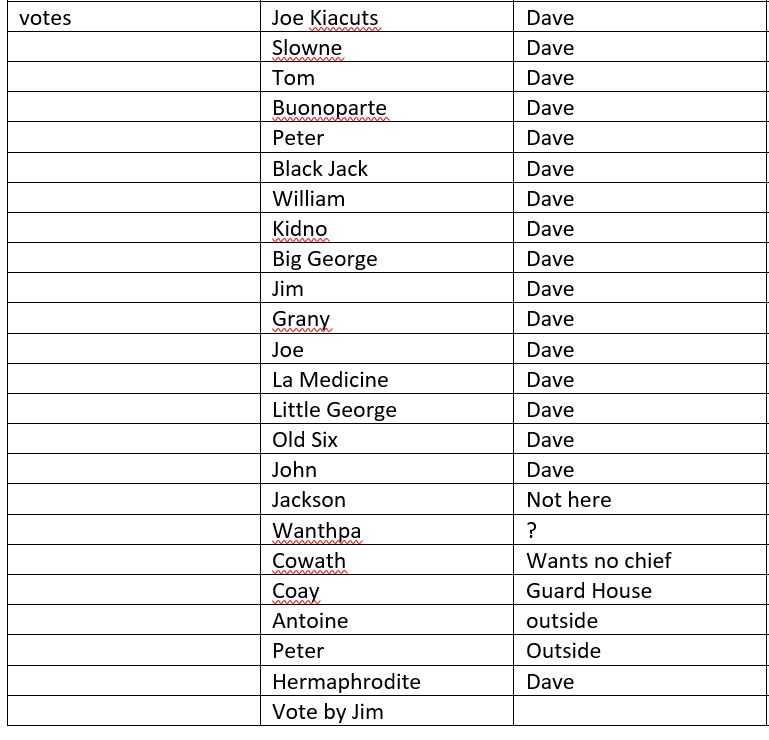 Looking through the tally of the votes, at least two men apparently did not have their votes tallied, “Hermaphrodite” is listed at the bottom but no checkmark by his vote for Dave, and Jim on the right side states he voted but not for what. reasons are given for why the men did not want Dave as the Chief. “Outside” means outside of the reservation, one man was not present in the “Guardhouse,” which means probably inside the Fort Yamhill blockhouse which we know was used as a jail, and Cowath did not want a chief. Wapato Dave maintains a position of leadership at Grand Ronde speaking for his people into the late 1870s. He died in 1882 with wife Sarah being murdered by Tom Gilbert (Molalla), in revenge for having turned Tom in for bootlegging.

This election sets a couple of new notions about the reservation. Chiefs by 1864 were being elected by votes of the male heads of the tribal families who were identified as part of their tribe, and the notion that tribes did not have democracy is incorrect. This notion was so prevalent that in the 1930s tribes were being called socialist and even communists by Congressmen and the Indian Reorganization Act was passed (Wheeler-Howard Act 1935) to have tribes create constitutions and “become” democratically elected governments. Within the other documents of the Confederated Tribes of Siletz Collection is a small collection which includes documentation of elected leadership for the whole tribe in 1873  with George Sutton elected President, and a set of 26 ordinances for the reservation. So there is clearly a case to be made that Grand Ronde had elected leadership as early as 1864, and continued this democratic government for decades later. in 1935 Grand Ronde wrote a Constitution which was put in place by 1936. The Grand Ronde Business Council of four people was appointed and this became the elected leadership model for the tribe until the implementation of Public Law 588 the Western Oregon Indian Termination Act in 1956.