In 1855, after the tribes of the Willamette Valley signed the Kalapuya Etc. Treaty (1/22/1855) they were resettled by Indian Superintendent Joel Palmer on temporary reservations in the valley. Local farmers were recruited and assigned as Special Indian Agents to take care of the tribes. They were able to get some money and supplies to take care of and feed the tribes, mainly Kalapuya, Clackamas and Molalla Indians. The tribes at this time were very few individuals, the most populous, likely the Santiams with about 250 people or a few more.

One tribe, the Mohawk Calapooians lived within the Mohawk Valley to the East of Springfield and Eugene. They had been renamed Mohawk, because of the naming of the valley by the settlers who brought that name from the east coast, from the Algonquian tribe of the same name. Their real name, as recorded in several accounts was Pee-You or Pe-u.

In 1855, the American settlers in the Willamette Valley were taking up Donation land claims, and this was reducing the available acreage for traditional gathering of foods. The vast camas prairies of the valley were plowed under to make way for agriculture. Then farmers and ranchers began fencing fields, jealously guarding their livestock and crops from strangers. The introduction of pigs served to root up root crops and cattle polluted and eroded the land.

Then, the settlers did not want to live as neighbors to the Indians who did not have the same views on cleanliness. The Indians were not Christians and therefore undesirable. Then also, there were constant battles and fighting among the settlers and tribes in other locations, in southern Oregon and on the Columbia, and the settlers in the Willamette Valley did not want the same in their area. These feelings were very common among the settlers despite the fact that the Kalapuyans had never acted against the settlers, had accepted them and had tried to make friends as best they could. Many Kalapuya Indians even went to work for the settlers helping them build their farms, install fencing, build barns and houses, and plow and plant their crops.

The intent of the treaty signing  was to buy the land from the tribes and removed the tribes. But there were no reservations yet prepared to receive upwards of 3,000 Indians from western Oregon. So Palmer settled on the plan to remove the tribes to temporary reservations.

The following is the transcript of  a document that secures a small area of land for the tribes at the Mohawk Valley, and presumably some of them from the Eugene area as well.

1855- “Be it known that we William Simmons and James A. Scott do grant to the superintendent of Indian Affairs in Oregon for the term of four years or until the Indians shall be removed by order of the United States the following described portions of our respective land claims as a temporary reserve for the Mohawk Band of Calapooia Indians to be occupied and cultivated by said band to wit the said Simmons grants of his claim…” (RG75, M2 Roll 13 1855)

The fact that a few farmers felt comfortable enough to take this duty is important. Its likely these men had good relations with the tribes already.

A little research in the 1855 General Land Office maps (GLO) and I found that map at coordinates 17s 2w, contains the land-claims of two men, J.L. Scott and Simmonds. This Simmonds is probably the Williams Simmons in the letter above. The area between their lands is likely to be the Mohawk reservation. The GLO map is not detailed enough to find the Northern corner with accuracy (I would need to get a more detailed description from the State Archives), but we can get a general area.

This area lines up well with the Google map depiction of Marcola, which is just east of Springfield in the Mohawk Valley.

The Calapooia Indians at the reservation remained there for another 10 months. In late January 1856, Palmer ordered the tribes to remove to the Grand Ronde Valley Reserve. This reservation, first called the Yamhill Valley Reserve or Yamhill River Reserve, was only to be temporary. By 1857 the Coast reservation was ready to received Indians as the Siletz Agency had been built. By this time because of the Rogue River War that erupted in 1855 and was not settled until the summer of 1856, the federal government decided to separate the tribes by whether they had gone to war after signing a treaty. The Kalapuyans remained at Grand Ronde, now a permanent reservation, as they had remained peaceful.

The census of the Grand Ronde in 1856, lists for the Mohawk tribe:

The Mohawk band of Kalapuyans remained at Grand Ronde Reservation thereafter. One member of this tribe of repute, was Indian Eliza Young. Indian Eliza had been born in the Mohawk valley and had married to an Indian from Brownsville. She was eventually separated from her husband and remained in Brownsville for the remainder of her days. When she became blind, she kept making basketry and the townspeople cared for her until her death.

At Grand Ronde, the tribes had to live in Canvas tents until houses could be built for them. Many people were getting sick and dying from exposure to the elements, especially the old and sick. They had to hunt and gather their own foods as the federal government was slow to approve funding to buy cattle, farming tools, and seed.  In  August 1856 there were 1940 people in the Grand Ronde encampment, and 92 were sick (1856 Health Report) and 1 died during this month. In September 1856 there were 1950 people in camp, 613 had been sick in the camp and hospital, and 9 people had died during the month.

The Mohawk Band of Kalapuya are now a part of the Tribal people at Grand Ronde. In 2014, a project returned a place name to the area. The Chifin Band name returned to represent the Springfield Indian Education’s Chifin Community Center.

Jay Swofford, was inspired to figure out on his own where this Mohawk reservation would be, he being a resident in the area. Both products below are Jay’s work. 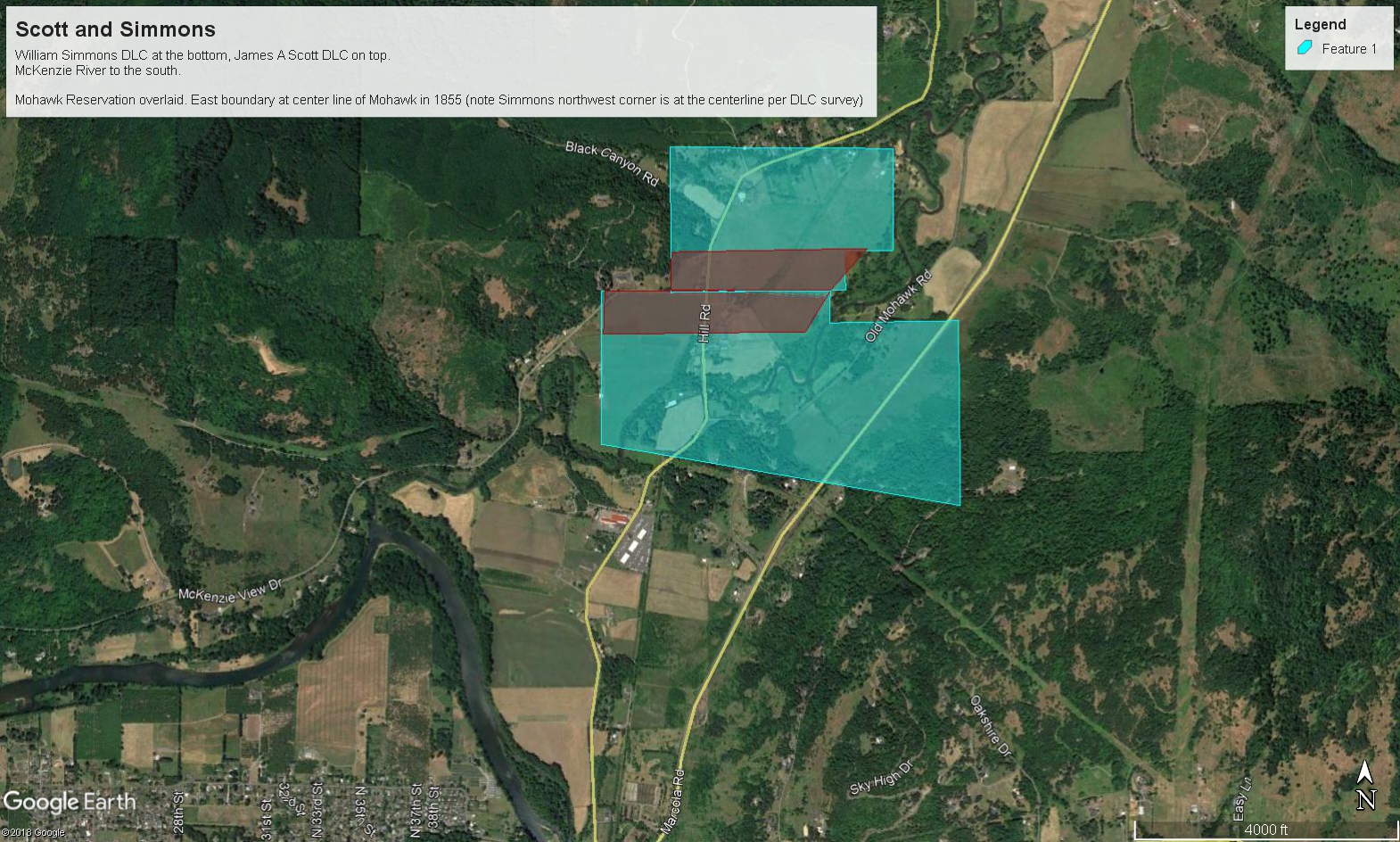 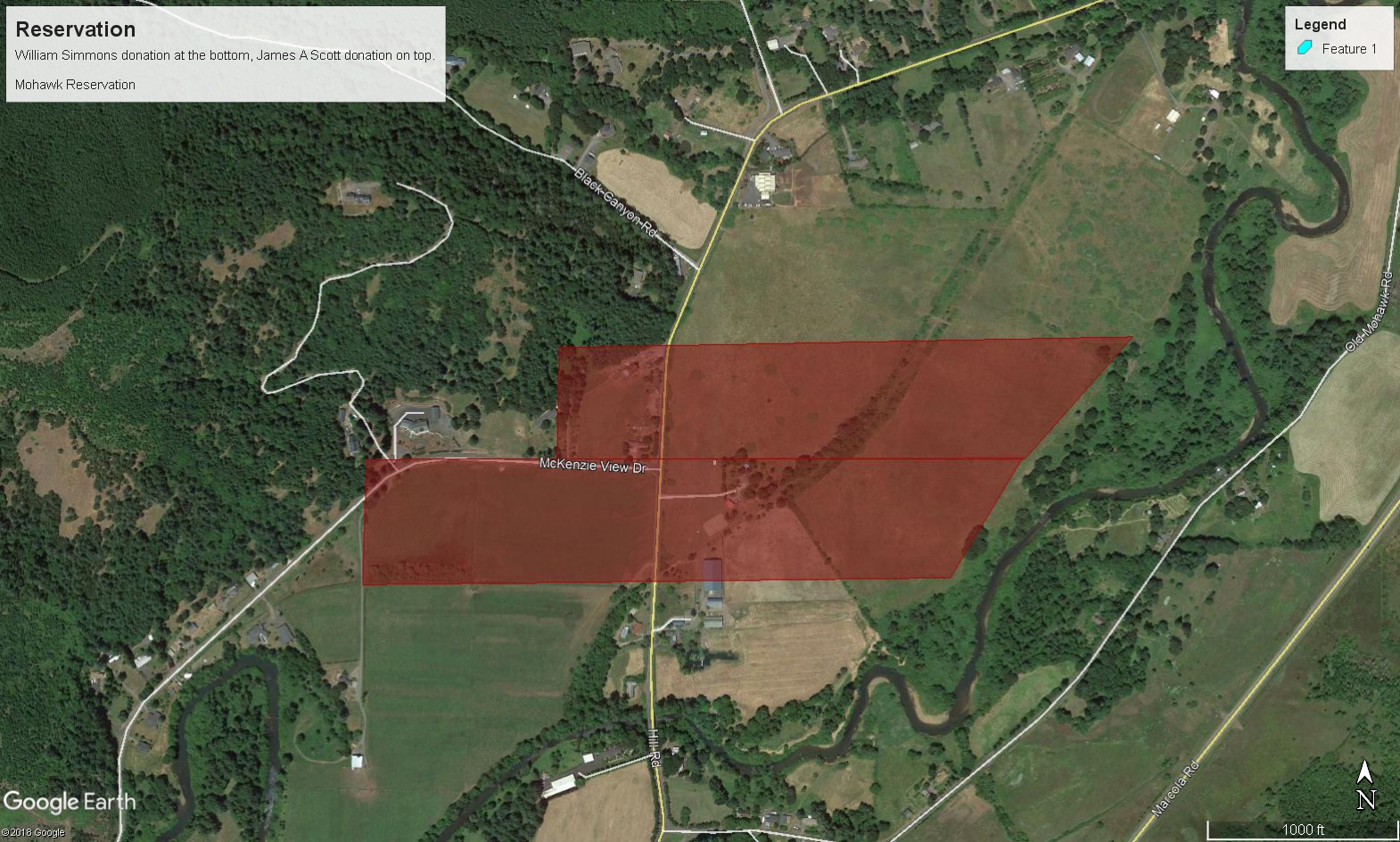 8 thoughts on “The Mohawk Band of Calapooia Reservation 1855”