Fort Calipuyaw was a trading post erected to hold some 29 people from the Pacific Fur traders. It was erected in 1812 by Alexander Henry and continued to be used by the Pacific Fur Traders until 1814. It was located about 10-15 miles beyond Champoeg near the location of Dayton. 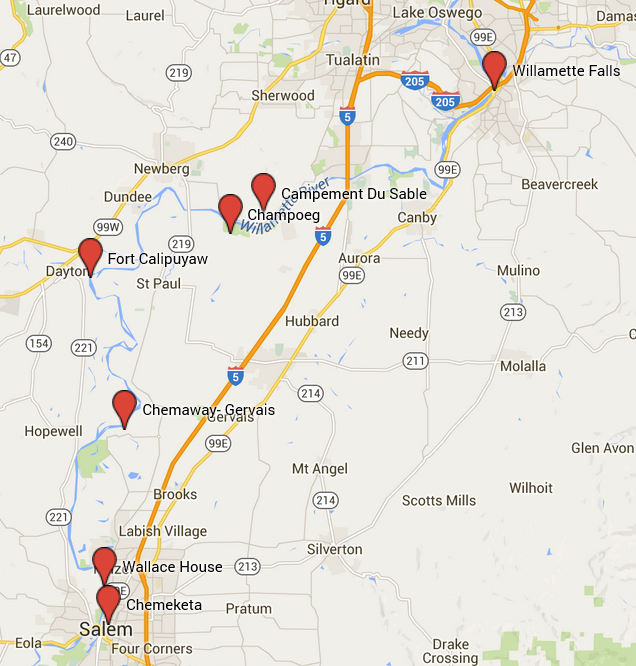 Fort Calipuyaw- 30 miles above the Falls of the Wollamut, Wednesday 8th December. (1813) The Party under Mr. Henry, or which I am a member, reached this place, where buildings are to be erected, On Monday the  29th Novr. It consists of 29 men, Mr. H’s woman and child, comprised of divers[e] nations and languages- there are 6 Sandwich Islanders, 4 Iroquois, I Missawyi, 1 Nipesang, 16 Canadians and 1 American (myself)…Mr. Henry is trading some roots with the Calipuyaws along side of me, for beads, who not thinking the quantity sufficient are loudly asking for more. (Astorian Adventure, the Journal of Alfred Seton.1811-1815, edited by Robert F. Jones.)

This post was well north of the Chemawa village. The post was a location for the fur traders to stop and get their bearings before setting off into the west and the coast. The fur traders sought to extend their trade to the coast and into the Umpqua basin. Similar to the Campement du Sable to the north, Fort Calipuyaw served the purpose of organizing the party before setting out for trade with the tribes.

The location was north of Wallace house and apparently featured a tribe of Indians in the location. The tribe was likely part of the Ahantchuyuk tribes and bands, however, its location, well to the west of the Pudding River, may have meant that it was a part of the Tualatin tribal sphere.