From original 25,000 Kalapuyan people (estimated) in 19 tribes and bands, they were reduced to about 800 by 1850 through diseases like malaria. The loss of population caused cultural collapse and the confederation of many different villages to a very few. This left the land open to settlement from other tribes and American settlers. Americans encountered a park-like setting, a vast flat clear prairie with a mild climate and plenty of water, perfect for agriculture. The collapse of Native culture caused the collapse of most maintenance of the environment.

Labeled as Hunter-Gatherers by Anthropologists; under examination, the Kalapuyans appear to be more complex than that simple definition.

All tribes in Oregon had the practice of the seasonal round. This is a complex annual system of family groups or whole villages moving to where resources are ready for harvest, hunting or fishing. Many resources, processed in the field, would be returned to winter villages for storage. Families owned specific gathering locations, traded at trading centers in a cultural pattern existed for an estimated 8,000-10,000 years. 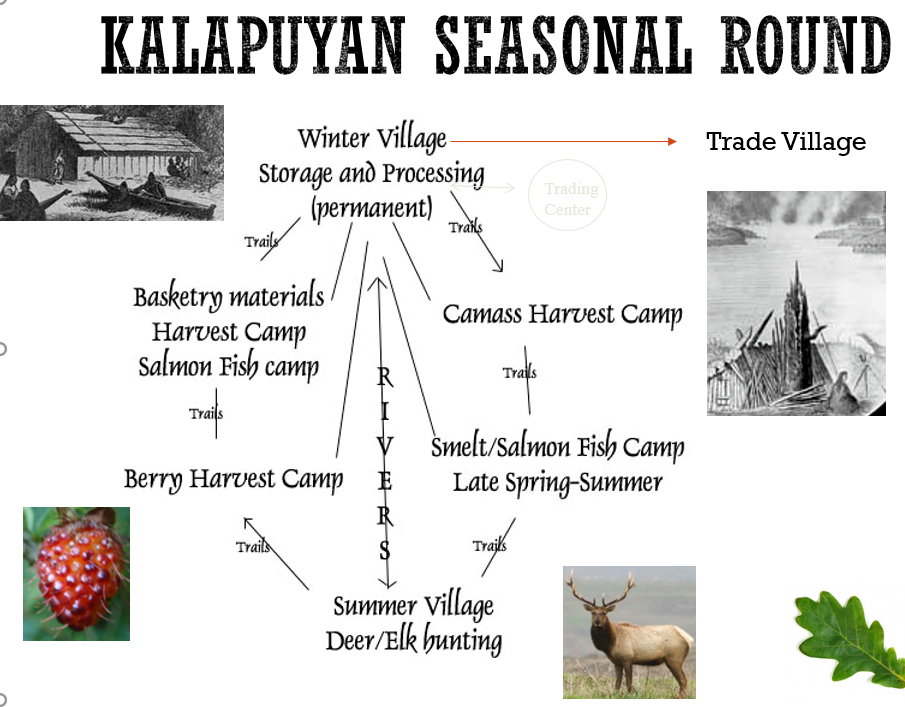 The Kalapuya calendar, gathered in 1877 by Albert Gatschet at the Grand Ronde Reservation, emphasizes the seasonal round of the Tualatin Kalapuyans. They followed the annual cycles of the wapato and camas food plants. There is one mention of hunting on the calendar and numerous months mentioning the plants, suggest that they followed the plant cycles, more than the cycles of hunting or fishing. This suggests that they ate a plant-based diet and augmented their diet with meat and fish when they could, but their mainstay was the starchy bulbs of the wapato and camas. Acorns would have also been a staple as they are plentiful in the valley.

It was/is common around the world for indigenous peoples to depend mainly on a plant-based diet and ingest few meats. Americans, and contemporary culture may be biased towards thinking that meat-based diets are the best for human consumption.  The majority of cultures in the world, through time, only had meat occasionally, not as the main course.

The Camas cycle, emphasized in the Kalapuya Calendar above, is here revealed in the ways that ther Kalapuyans traveled about their lands in the annual cycle. Many of us follow these cycles today in Oregon. We have grown up learning the seasonal cycles of the berry plants and agriculture in our valley. We grew up knowing that strawberries are ready at the end of May, after them, cherries, blackberries, blueberries. Many people still follow this cycle and access u-pick opportunities, and many have grown up canning all manner of fruits and vegetables. So we already understand the fundamentals of the plant cycles, and can understand  and empathize with the camas cycle below. 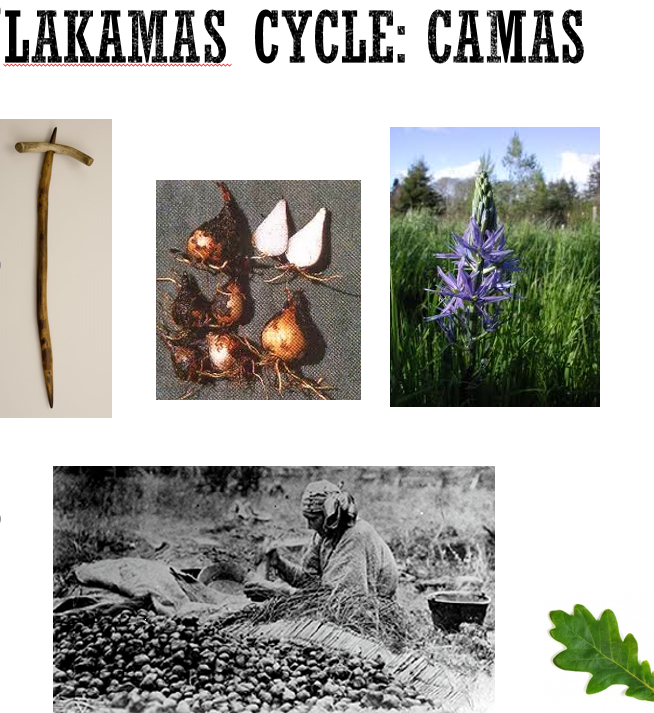 September-Fall- Travel to Trading villages at Willamette Falls and trade Camas for dried Salmon or other products, resources, wealth items

Various different plants would be harvested at any of the camps. Staples would have been the most important and drawn the people annually to a camp site, but at the gathering camps many other plants would be available and known. Similar for fishing and hunting camps; the days to weeks spent in these camps would be filled with a variety of activities for the various family members. 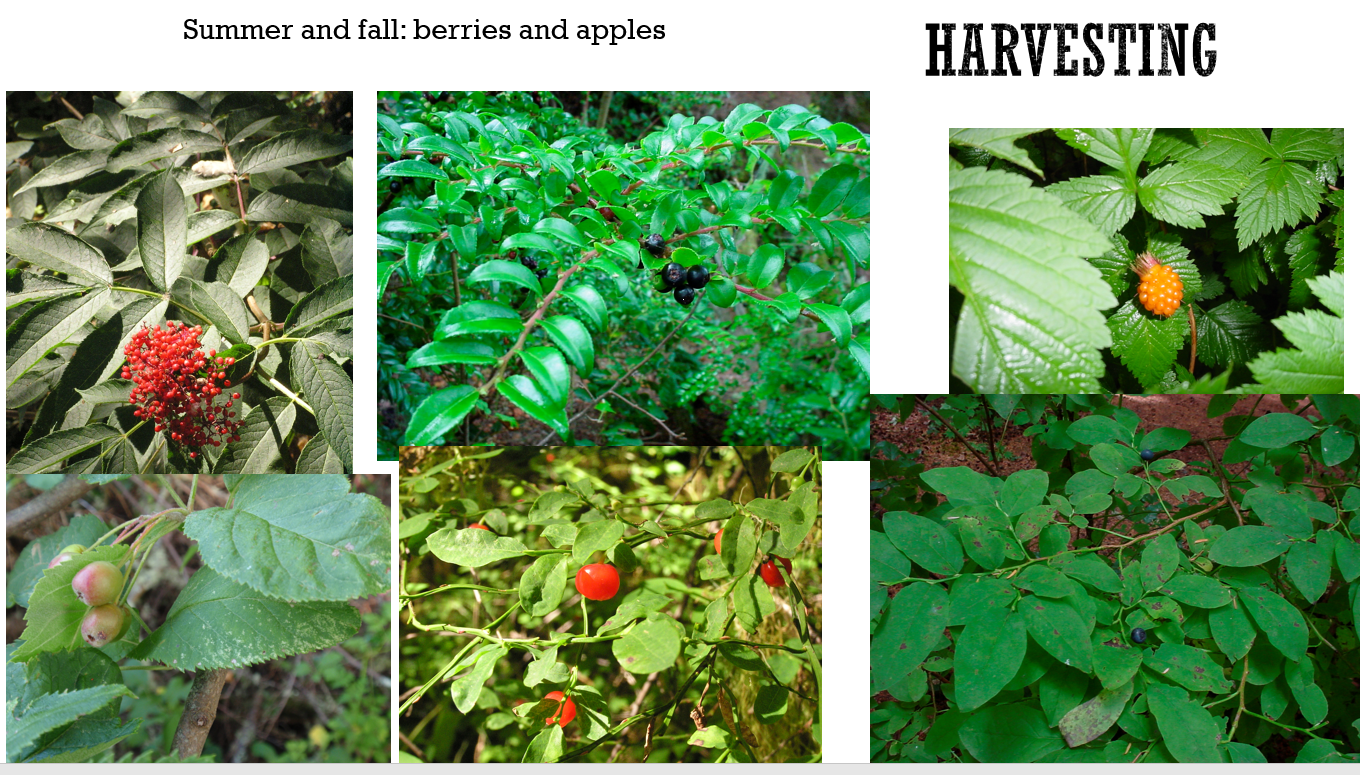 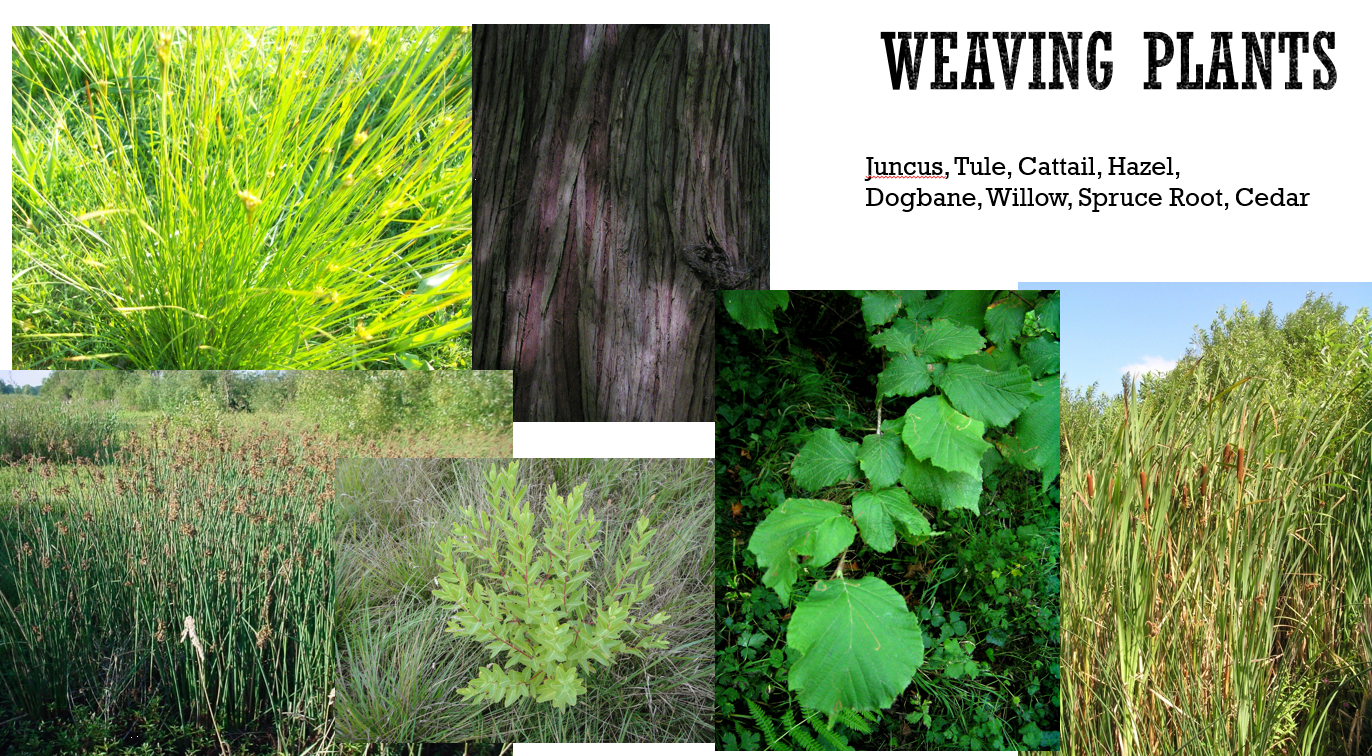 From the rushes would be woven baskets and clothing and tools for the Kalapuyan households. Tule and cattails would be made into mats for a variety of uses. Cedar is the wonder plant, the bark could be woven into all manner of products, including waterproof clothing and hats, the wood was used for making plankhouses. Bark and wood could be harvested from living trees. Large fallen trees would be made into canoes. Dogbane was twisted into cordage, rope. 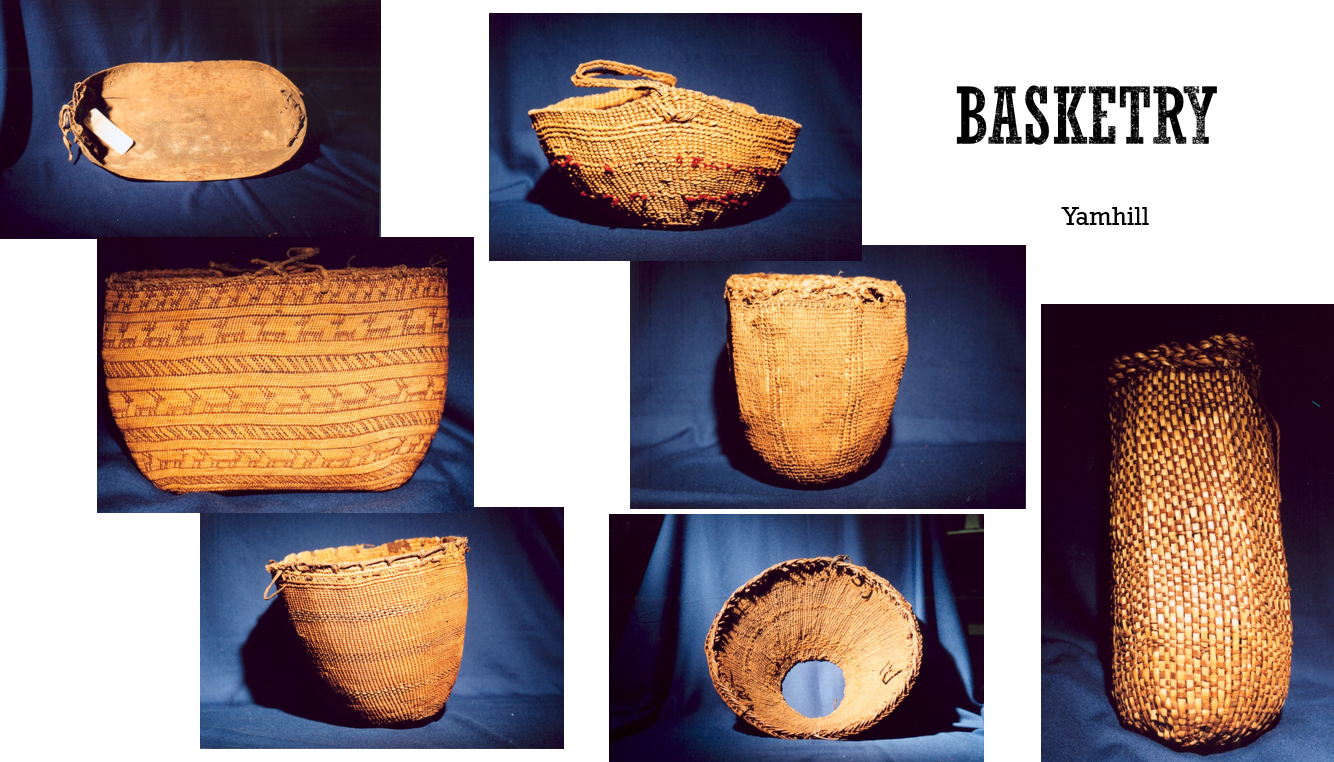 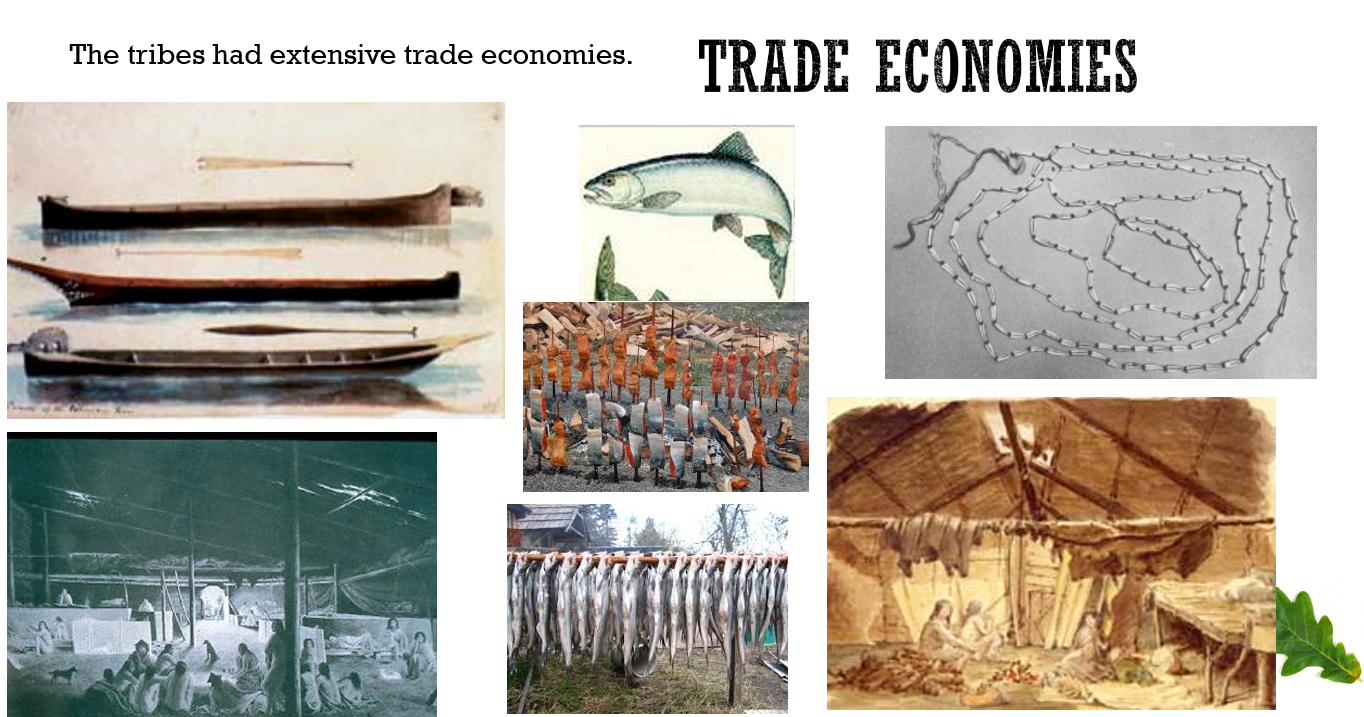 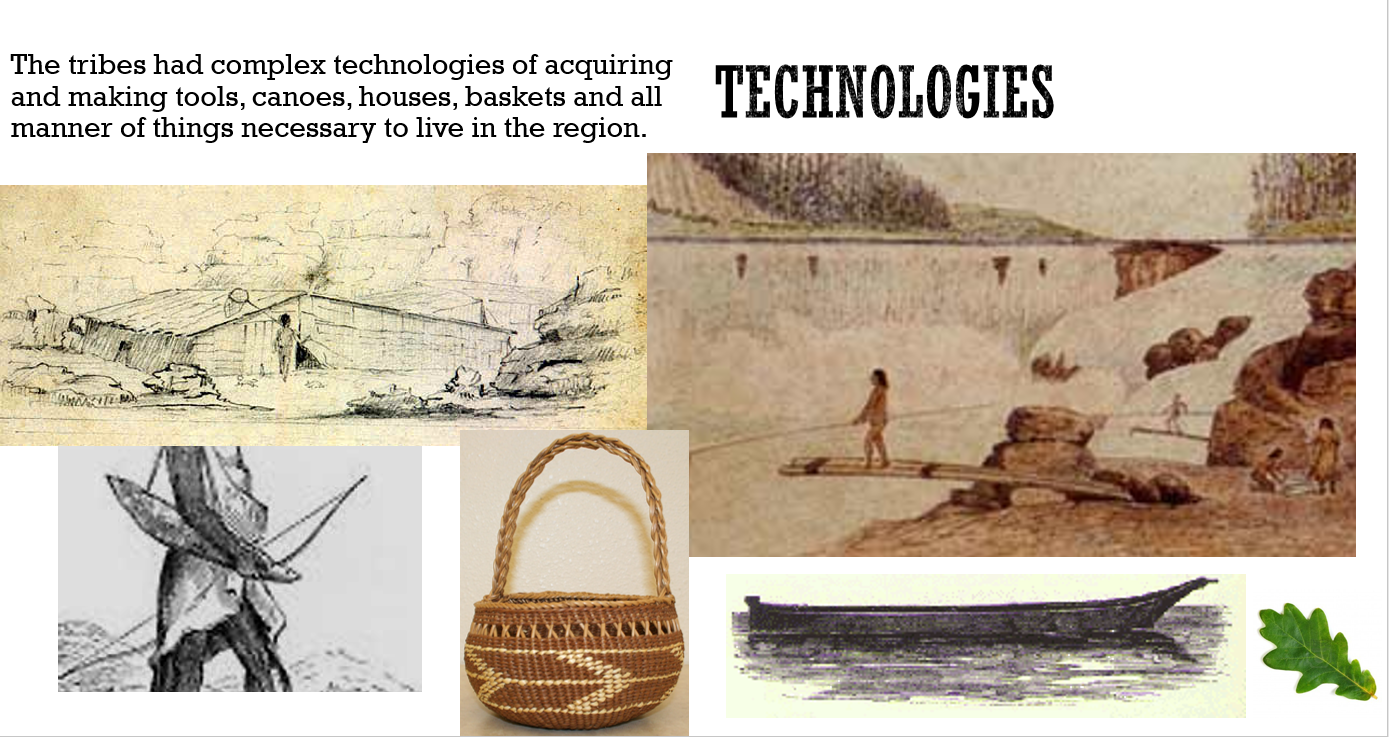 Many tribes had unique products they traded into the extensive regional trade network. The Chinookans had master canoe carvers, some tribes were living next to waterfalls and had lots of salmon, sturgeon, eel, and developed unique dip nets for fishing. Different tribes had different basketry styles.

The Kalapuyans participated in the Columbia Trade network. Their major products were camas and wapato. After the bulbs were processed and packed, they would travel to Willamette Falls and trade for dried salmon or all manner of wealth trade goods. Ocean products (shells, whale products) and prairie products (buffalo hides) would converge in the Columbian trade network. In turn, the Kalapuyans would trade with more southern tribes for what they had. Some reports of the Umpqua valley Kalapuyans, the Yoncalla, suggest they traded buffalo hides with the Coos Bay Indians for shells (Harrington). 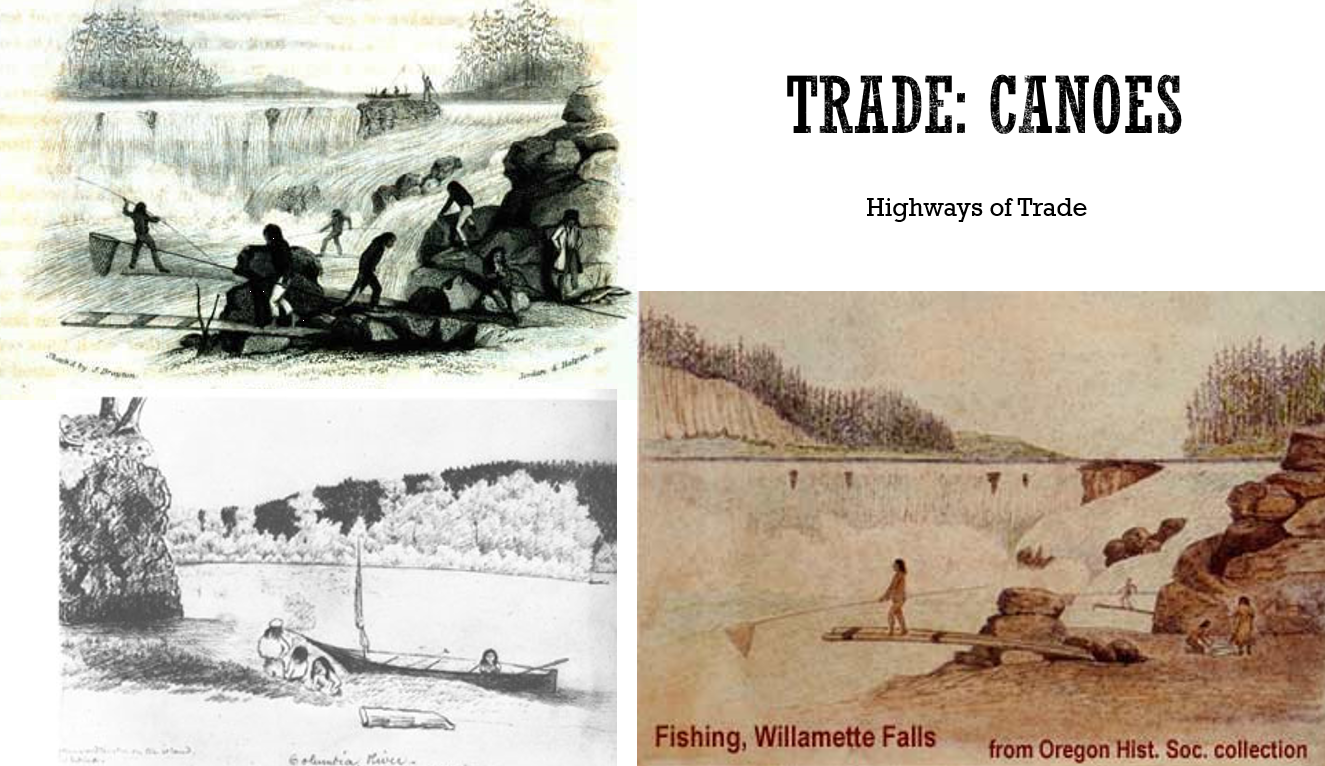 The rivers were literal highways of trade throughout a wide region. Native traders did not have to remain in their small region, and could travel with canoes widely on the Columbia to find what they wanted. Evidence of the extensive intertribal trade network is first recorded in the Lewis and Clark journals (1805-06). Their maps, suggest a great number of villages and peoples in the lower Columbia, and they encountered many traders in other villages.

The inter-tribal networks were inter-connected by inter-marriage in the region. Intermarriage created good trade relations between chiefs and headmen, and peace in the region. 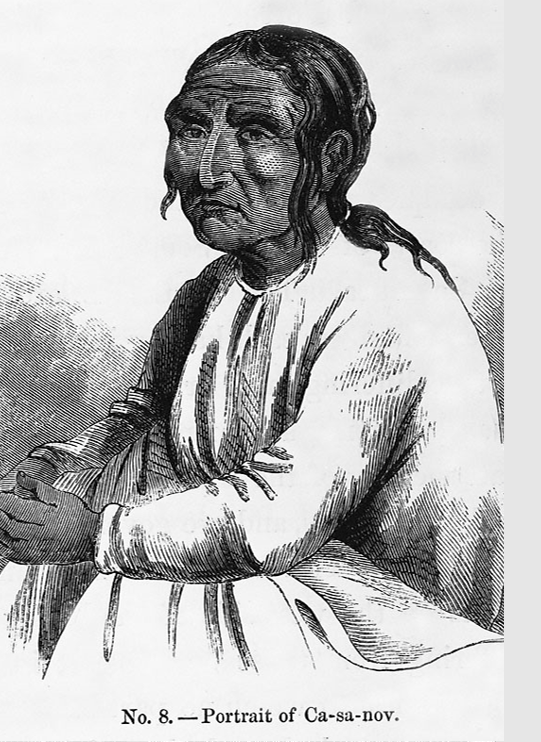 The Willamette had its own trade network, and a series of Kalapuyan villages which were accessed in the fur trade era. 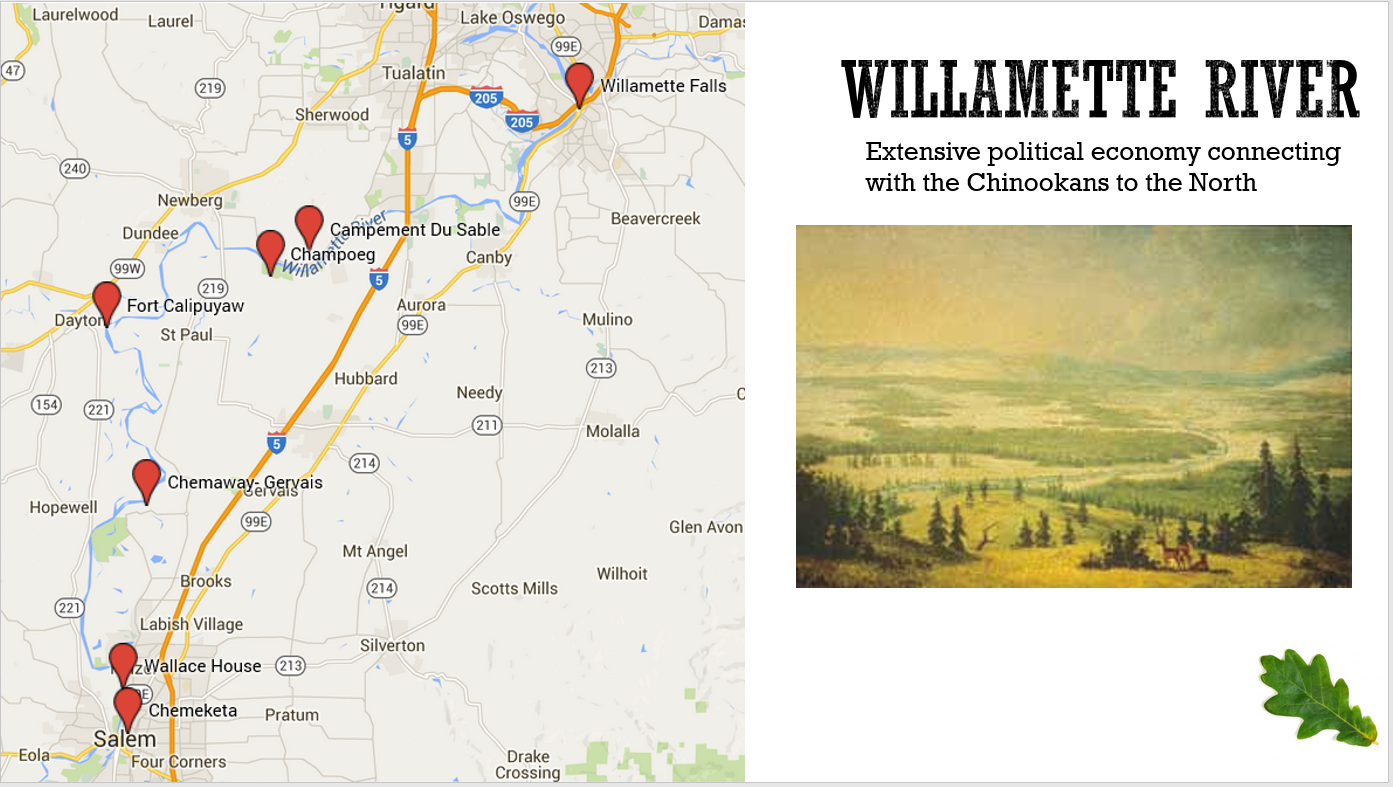 The Salem area had extensive trade and travel from the Kalapuyans. Salem was known as a camas gathering site. The Chemeketa Plains had the Chemeketa Kalapuyans, aligned with the Santiam, and Lake Labish likely was a huge resource gathering area. Some of the original features of the Chemeketa plains may be preserved at the State fairgrounds and Bush Park, who both feature extensive camas fields and oak savannah. Lake Labish was drained in the early 20th century for more agricultural lands, so that environment was severely impacted. 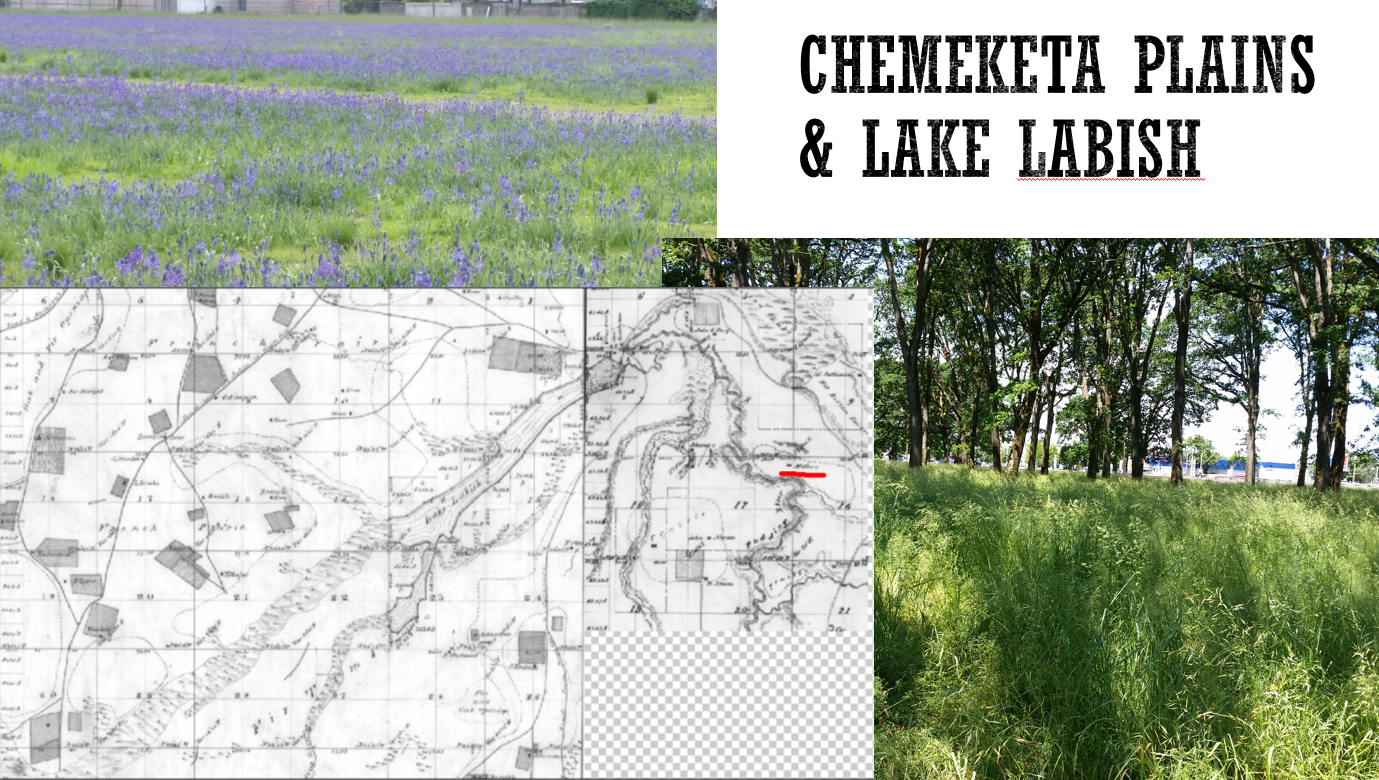 The Kalapuyans, like all other regional tribes heard of the coming changes to their lands well before the first white men came exploring. Stories of changes would have passed and been told at each trade gathering. Below is a story of a prophesy of change that was told at the Grand Ronde reservation by Mose Hudson (pictured).

Settlers in the mid-19th century encountered a park-like setting where the valley, which appeared to be cleared and ready for their farms. Settlers and later industrialists and business men sought to exploit the environment for their own uses, to save and preserve the naturally occurring timber for industry, and Oregon became one of the largest producers of wood in the world.

Anthropogenic Fires- effects and benefits of the Kalapuyan cultural practices

Fires were recorded in the History of Oregon

It was a custom of these Indians, late in the autumn, after the wild wheat was fairly ripe, to burn off the whole country. The grass would burn away and leave the pods well dried and bursting. Then the squaws, both young and old, would go with their baskets and bats and gather the grain. It is probably we did not yet know that the Indians were wont to baptize the entire country with fire at the close of every summer; but very soon the fire was started somewhere on the south Yamhill, and came sweeping up through the Salt Creek gap.  Jesse Applegate ( remembering 1844)

An anthropogenic pulse is occurring

The removal of Kalapuyan Management of the land, loss of fire management, is a catastrophic environmental event –  equating colonization and removal of Native people to an anthropogenic event. This pulse is happening now, we are in the midst of it, as Americans struggle to understand the deeper lessons of environmental management.

In recent years we have had massive catasrophic fires that have destroyed tens of thousands of acres of woodlands. These fires really began in the late 19th, early 20th centuries with fire suppression as the main way to manage the forests and save the wood for timber production. Now we have over 100 years of fuel build up in our forests. This combined with warmer temperatures overall and we have the makings of catastrophic events, caused by removing anthropologenic fires from our management of the forests and by suppression natural fires.

We are in this midst of an anthropologenic pulse, a change in our world, a change brought about by American actions, by suppression of native cultural practices and native peoples. We are seeing the results of the colonization of the western United States. 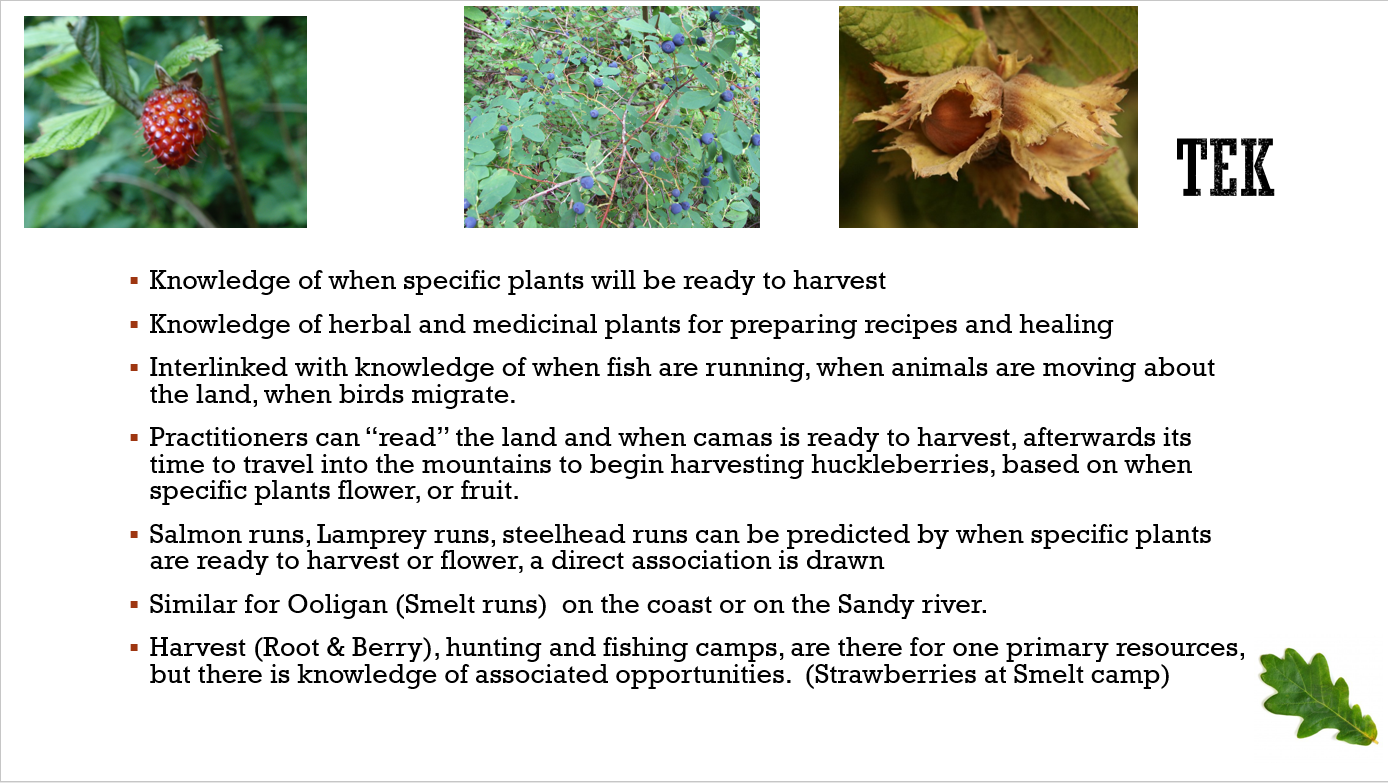 This knowledge is a valuable library of information about how to live a long time in harmony with our environment. Native people have been in this region for over 14,000 years. Through working with Native peoples, TEK practitioners, and archived knowledge sources was can find valuable information to return to many of these cultural practices as a society.

https://ndnhistoryresearch.com/ | History and culture of the W. Oregon Tribes

Keeping It Living: Traditions of Plant Use and Cultivation on the Northwest Coast of North America By Douglas Deur

This presentation was originally presented on 11/3/2016 at the Straub Environmental Center, Willamette Heritage Center, Salem, OR. Many elements were added to make it understandable in this format. Elements were borrowed from previous presentations and graphically altered by myself.