In the 1850s, American settlers were just setting up their communities, and towns, throughout the Oregon Territory. The earliest pioneers had arrived in 1830s, and a great rush of humanity began in 1844 with the start of the Oregon Trail. The “pioneers” settled in key locations throughout the valleys, first in western Oregon. Each area has its first pioneers and they normally are remembered by town names they may have personally named. One such community is Pleasant Hill, east of Eugene/Springfield. There the earliest pioneer is Elijah Bristow who arrived in 1846.

Bristow was originally from Illinois and served in the war of 1812, in 1845 he set out to seek his fortune in the west. He arrived in Sutter’s Mills, California in 1845 and wintered over there. He then joined with an expedition which included Eugene Skinner to go to Oregon, venturing as far north as Salem and then traveling south. Bristow claimed his land between two hills beyond the Middle fork of the Willamette River in 1846. There he named the community Pleasant Hill and settled in to become the first white settler in Lane county.

Bristow’s 640 acre land claim was the first for the county, perhaps the first act accomplished for the new territorial legislature. His family joined him in 1848 after he had built his cabin and it was ready for them. He helped establish some of the early community and town structures and churches and was especially known as the postmaster for the area.

Bristow had many contacts with the native peoples of the land. He is noted for having dealings with Klickitat and Klamath peoples. The well-known Klamath Trail, out of the Cascades and into the Willamette Valley, passed Bristow’s land claim and so he would have encountered native people traveling the trail as it was a main trade route into the southern valley from the south. Also in the area was a well known band of Kalapuyan peoples, the Winefelly, or also later called the Pleasant Hill Kalapuyans. There at Pleasant Hill, was an annual campmeeting location at a principal village where the tribes would gather to trade, re-establish relationships, and talk about their histories. Polk Scott, a Kalapuyan spiritual man at Grand Ronde Reservation would travel off-reservation to hold these tribal campmeetings in Pleasant Hill and Cottage Grove.

In 1854, Bristow was engaged in helping create and connect the earliest post offices of the Oregon territory. He apparently saw a problem where there was needed additional post offices in southern Lane county to connect the newly arrived communities of settlers. He sent Joseph Lane, the first Governor of Oregon Territory and an important politician, a letter proposing the creating of two new post offices to connect the Umpqua basin with the Willamette Valley. The names Bristow proposed were, as he states, derived directly from the Tribes of the area.

About the first of July last, some of the citizens of this county got up and sent to the P.M. (Post Master) General a petition, for a mail route from this office to Oakland in Umpqua and an intermediate office at Henry Sinah’s on the Coast fork of the Willamette. The office was granted with the condition that the P.M. should insure it to pay $300 per …, and of course the “concern” was fallen through.

Now sir you are well enough acquainted with the geography of this country and the existing mail routes to know that all the mail matter sent to or from the east side of this valley South of Salem to the Calapooia Mountains must pass through Salem to reach its destination causing … delay and vexation, we all know the necessity of easy communications between different parts of the country well that it should be performed in the cheapest way and shortest route all letters and papers from Umpqua and Jackson counties are generally 8 (?) days passing around to this country and it appears that they take a detour through  Portland  or [some other] place that detains them for [Parts of letter are torn off for a section] {something about improving communications with California}

You will see at a glance that more who live immediately on the route will not be the only ones whom will benefit, consequently it will be supported by those North and South of the Calapooia being only 25 miles to Yoncalla where it should connect and not at Oakland as the Petition read. So that it will connect with the mail to and from Scotts bury (Scottsburg?) and the lower Umpqua.

There should be two intermediate offices established, the first at the house of Greenberry B. Pierce, who should be appointed P.M. The P.O. should be called Camas Swayle, it is only six miles from here – in a large and populous neighborhood, who much need an office. The other should be at the house of Henry Small six miles further, who should be appointed P.M. This is the place where the office, above mentioned was granted. and was … By request of  Mr. Small but I believe a majority of that people with myself would much prefer the name “Millpoo”  or Millpoo Ilihee as that is the Indian name for the place.  Mr S’s neighborhood can now supply eighty scholars to a school, between the ages of eight and fourteen years of age. Please consider this favorably and remit me a line at your convenience and you will much oblige many citizens. Our country has very rapidly filled up by the new immigrants  [who are a] thriving industrious people…

It appears that Bristow may have been listened to by Lane, and the name Camas Swale was used for an area between Goshen and Creswell. It is unclear whether this name was used for a Post Office name. G.C. Pierce did become postmaster of the post office east of “Creswell” in 1855 (likely at his DLC), and it moved to Saginaw in 1861.  Yet the area near “Camas Swale” was not named Creswell until 1872 (after the 23rd Postmaster General of the US, John Creswell). Its possible that the name Camas Swale was used for the post office by Pierce from 1855 until at least 1861, because the name survives on the map as the name of a creek, and an area off I-5. 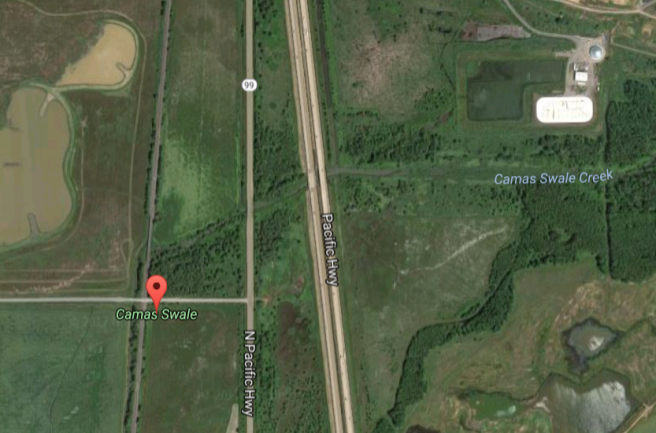 Camas Swale name survives today as a creek, a farm, and an area just off of I-5 freeway. Google Maps image

The Pierce allotment appears on the 1855 GLO map for the area just south of Eugene-Springfield and east of present day Creswell. In addition, we can see that the Camas Swale is quite extensive, with great soils, and delineated on the map below as rolling prairie of which the Swale is central in the prairie and likely extended far to the north, perhaps as far as Springfield. A swale is a low marshy depression between ridges.  Its highly likely this was a preferred camas growing and gathering location for the Kalapuyans in this area. Interestingly, while Camas Swale is obviously a placename in Oregon, there is even a sign on I-5, there is no entry in Oregon Geographic Placenames book (McArthur)for this name.

The other location which Bristow is advocating to have a post office, he calls Millpoo Ilihee, as that is its Indian name. Its unknown what Millpoo means, but “Ilihee” is Chinook Wawa for Land.  Other oral histories suggest that the location of Cottage Grove was originally named in Chinook Wawa “Lamati”, meaning mountain.  The area is at the edge of the Calapooia Range and at the foothills of the Cascades, and there are many hills and mountains in the area. The possible meaning of Millpoo is that it is a version of Calapooia, which would then mean Calapooia lands.  The location of Millpoo Ilihee, according to Bristow is at the site of Cottage Grove, at the Henry Small DLC. 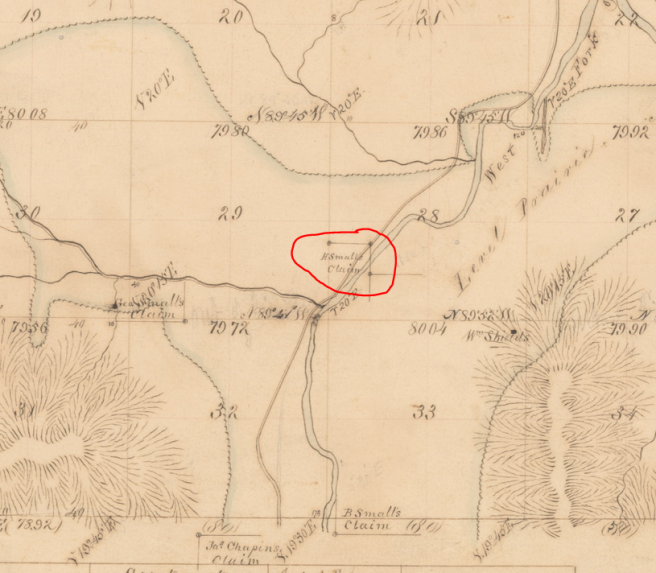 Section of GLO map 20s, 3w 1856 at the location of contemporary Cottage Grove. Note the 2 other “Small” family claims (B. Small, George Small) near Henry Small suggesting a family group.

Present histories of Cottage Grove do not mention the prominence of the Small family, nor does the name Millpoo survive. It is likely a Kalapuyan word for the area- the most local tribe, just to the east of this location -was the Yoncalla tribe under the Chieftainship of Halo. Scholars presently have little insight into the origin of the name or its meaning. A thorough look through the Bristow Collection at UO Special collections may help.

Elijah Bristow  letter copied from the Joseph Lane Collection at Oregon Historical Society Library- this letter is only partially legible with sections torn from its center, but the Millpoo placename discussion is very clear and mentioned in this spelling at least three times. I look at these early pioneer letters with some skepticism as usually they are full of Christian philosophies which color what they think about the tribes. This letter was very straightforward, somewhat political, yet forthright as to the proposal levied by Bristow. He did not propose an American name, Like Springfield and Eugene when he could have easily, and instead accessed local words as he appeared to feel that was correct. In other histories Bristow had many contacts with the tribes in the area. I feel what he is proposing is heartfelt and true to what he knows. He likely had many dealings with the Kalapuyans in the area.

Maps where gathered from the GLO map site of the BLM. Additional details could be revealed if I were to read through the GLO journals to accompany the maps. This may reveal further use of both phrases.

Further research into early Oregon post offices may reveal additional details. These sources are at the Oregon State Library, and perhaps at the Archives as well. Clearly UO research collections would be helpful.