In 1853, Joel Palmer was managing numerous needs of the Tribes in Western Oregon as Indian Superintendent of the Oregon Territory.  His first Treaty was the Treaty with the Rogue River tribes, negotiated and agreed upon by September 10, 1853, and nine days later Palmer was in the Umpqua Valley and negotiated the treaty with the Cow Creek on September 19th 1853.

These treaties set the plan for the establishment of a permanent reservation “at a later date” and the establishment of the temporary reserves of Table Rock in the Rogue River Valley, and Umpqua in the Umpqua Valley. This plan was set in place to immediately make peace in the region by removing the  tribes from the immediate vicinity of the White settlers, farmers, miners and ranchers. In early directions from General Joseph Lane (former Governor of Oregon Territory), Palmer (also a General) had been told to remove the tribes to the east of the Cascades to make more room for white settlement. The tribes would not agree to this.

The treaty with the Rogue Rivers was not ratified until April 12, 1854. Thereupon, likely within a month, the tribes in the region were moved into the reservation, and across the river and adjacent to the reserve was situated Fort Lane. Everything proceeded so quickly that a few residents did not have time to move before the reservation was placed.  Robert Metcalf had a land claim that was within the lands of the new reserve and he wrote Palmer in July to ask for $200 from the Indian annuities, in payment for his house.  Samuel H. Culver  was assigned to be the Indian agent at the Table Rock Reservation. After that first summer, information got to Palmer about Culver that set about a couple years of legal claims. Palmer heard from Huddleston (farmer employed at the reserve) that Culver was not providing for the tribes on the reservation, was allowing the harvesting of their wheat and hay without seed collection, and was not developing services or building homes for the tribes. And while some tribal people were employed harvesting hay, they did not understand farming, did not understand contracts and do not understand how Culver was negligent and stealing from them. 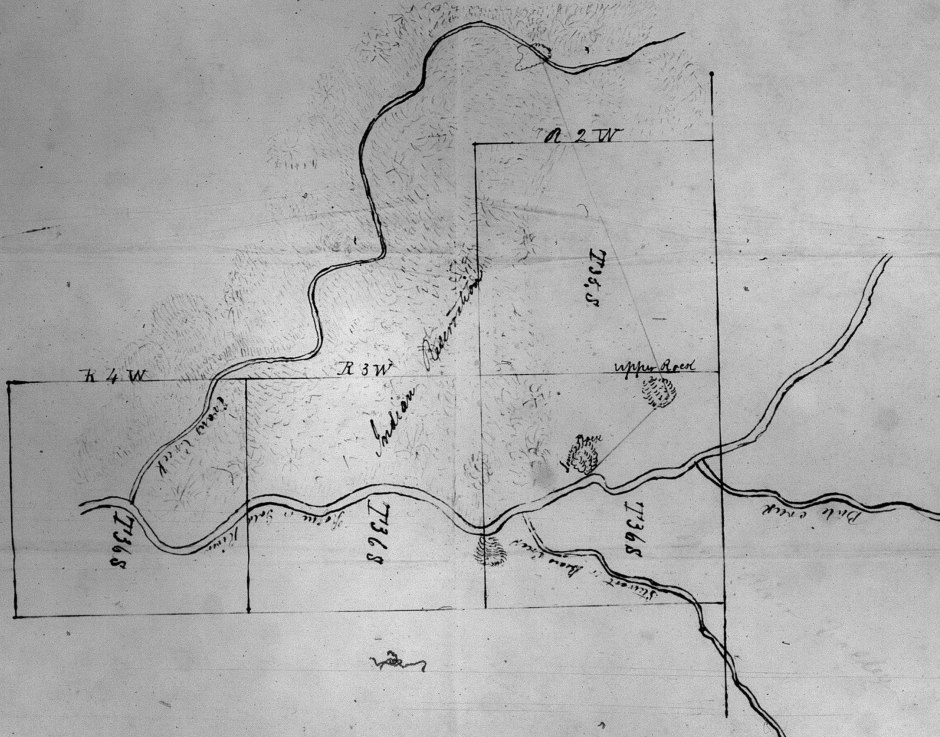 When the tribes removed to the reservation the government immediately set about teaching them how to grow their own foods. Agriculture was not part of their original culture. So when they went about harvesting their wheat and hay they did not collect the seed for the next season. At the same time, Culver employed the Huddleston family to harvest additional hay irregardless of saving seed.  In this manner thousands of pounds of hay was harvested and sold, and the money, apparently, did not return to the reservation. Culver appeared to taking the money for his own use. Then when the next season for planting winter wheat began, Palmer had to shell out large amounts of cash to buy seed again.

Palmer saw what was happening and began the process of gathering information and firing Culver. Palmer expressed his disapproval of many of Culver’s acts in a letter,

“I feel myself constrained by a sense of public duty to express my entire disapprobation, and that this system of dealing with Indians and permitting persons to speculate on , and profit by their inexperience and ignorance, cannot for a moment be tolerated…. The critical time too, at which this affair has taken place, when the utmost caution and vigilance on the part of the Agent is required to prevent the Breaking out of war that must result in their extermination renders your course the more to be regretted. Every thing tending to excite their fears or weaken their confidence in the good intentions of the Agents of the government, should have been carefully avoided. The great length of time intervening between the date of the treaty and its ratification, and the absence of funds to carry into effect its stipulations, naturally lead them to question our sincerity. When too they are dayly exposed to the threats and violence of reckless men, who shoot them down with impunity, and with scarcely an effort to bring them to justice, how great should be our efforts to conciliate and relieve them.” (1854 9 2 Palmer to Culver)

Palmer Replaces Culver with George Ambrose and  struggles along for another year using Metcalf as a farmer and a jack-of-all-trades, assigning him to go to San Francisco to get supplies and in 1856 having him collect tribes for their removal to Grand Ronde. For a time Palmer held out hopes that the tribes were going to remain on the temporary reserves for up to 5 years, until the planned Coast Reservation was ready to open. In 1855 Palmer orders the agents at the reservations to establish all manner of services, blacksmithy, livery, shoemakers etc. He uses the tribe’s annuities to pay for these services, stating they can probably be sold for the price paid for them.

But through the summer of 1855, additional hostilities break out, and it becomes apparent that the tribes have to remove before they are completely exterminated by the whites. Through the summer and fall 1855 Palmer is working with the military to find a new reservation away for the conflicts to remove Indians to.  On about November 26 Palmer finalizes an agreement with the settlers in the Grand Ronde valley to sell their lands. Palmer’s plans lay out a number of concepts previous unaddressed regarding the establishment of Grand Ronde.

First, the reservation was thought of by Palmer as being a further extension of the Coast Reserve. The Coast reservation was signed as an executive order on November 9, 1855.  The Grand Ronde valley was added November 26th or thereabouts. It would take another year or so to sort out purchasing of the lands of the reservation from the settlers. Palmer knew that food would be a problem on the Coast Reservation and he envisioned Grand Ronde Valley as being the breadbox of the larger reservation. His full letter is below,

I have just perfected an arrangement with the citizens of the Grand Round on the head waters of South Yamhill River by which I have secured a tract of land to be attached to the Coast Reservation designed for wheat farms and the settlement of a part at least of the Indians of this valley.

I purpose putting in one hundred and fifty or two hundred acres of wheat this winter, and in order to do so must have some one to superintend the business.

I therefore desire you if practicable to some up and take charge of this business. There are already several houses which will answer for families; others must be built for the Indians, and a general preparation for the next season’s operations entered upon.

I would prefer if you design doing so at all, that you would bring your family, so as to make a permanent beginning. You will have near neighbors. I design establishing a school as soon as we get the Indians on the ground, and that may be in six weeks. Messengers have been sent for the friendly bands in Rogue River and Umpqua Valley, designing to winter them at the point above named, and in the spring locate them on Salmon River near the coast. The latest intelligence received of the goods & tools shipped for those tribes, they had arrived in San Francisco and were being put on board the CharlesStevans [sic] to be brought up to Portland. Whether she is in or not I have not learned.

This Indian war is playing hob with all my arrangements, but we may be able to save a portion of the tribes from utter annihilation. I have lost all hope of being able to carry out the provisions of the treaty upon Table Rock and Umpqua Reservations, and therefore design transferring the Indians of those districts to the Coast Reservation.

If you design to do so come up and see the point before moving your family. It is one days ride from this office and over a good road.

You will remember that no person will be employed to service among the Indians who uses profane language, drinks as a beverage spirituous Liquors or holds illicit intercourse with their women.

This letter addresses many key concepts. Jeffers appears to have been the first employee of the reservation, and possibly first resident. (The Jeffers and Jefferies surnames are some of the tribal names that are at the Grand Ronde reservation roll thereafter.) Palmer is forced to remove the tribes soon, and it appears he made this decision relatively recently. The Grand Ronde valley reservation and the Salmon river were planned parts of the original Coast Reservation.  It is later, under a different administration, that the Coast and Grand Ronde reservations are separated.

The economics of Indian administration is clearly a big issue. Palmer is planning ahead and working to feed to tribes in order to eliminate the possibility of a large war. This war, after the thievery of Culver, causing a lack of trust between the tribes and the federal government, may have been inevitable. If the Indian agents break the treaty on their side, why should the tribes continue to abide. 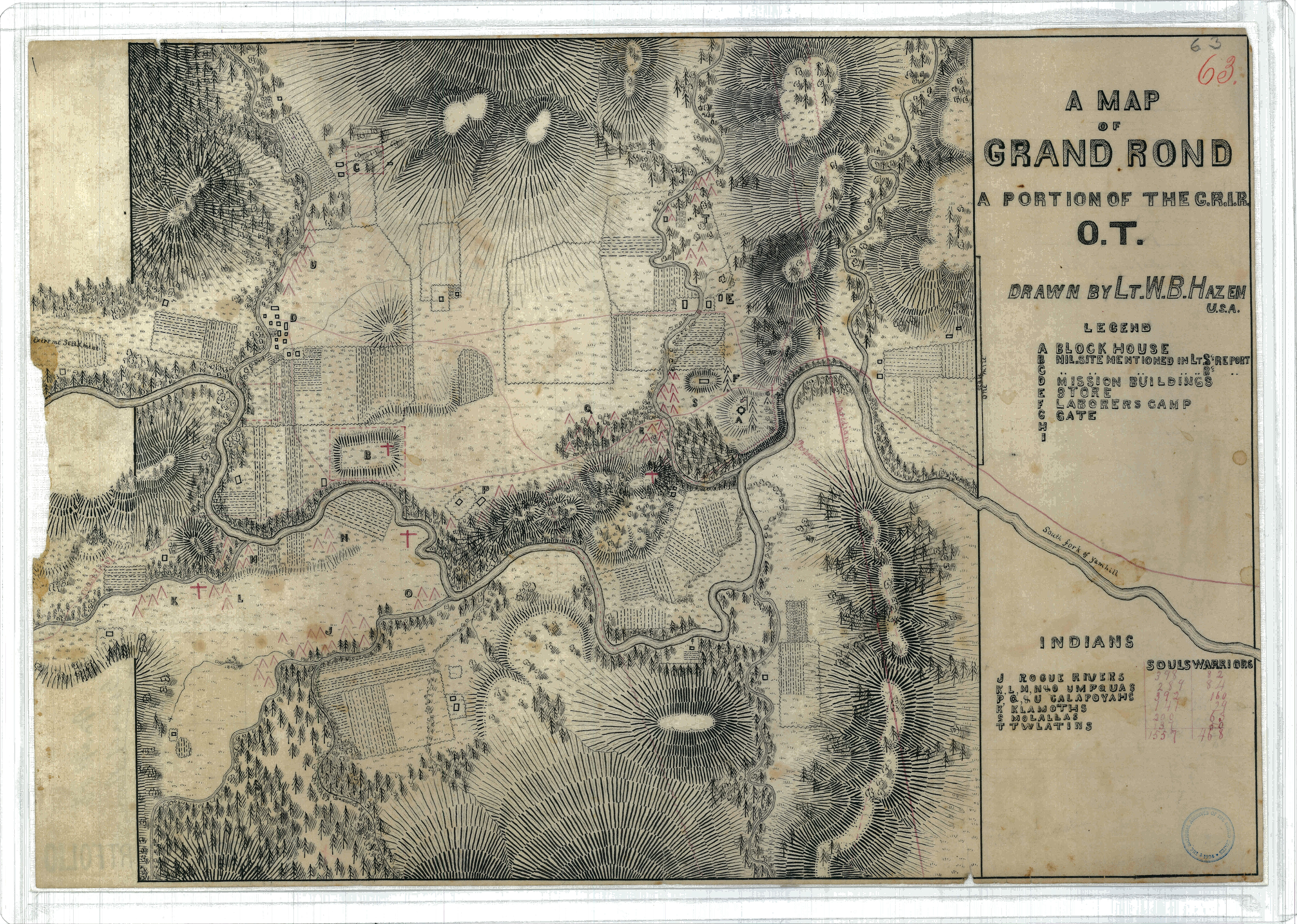 In December 1855 Palmer begins sending orders to his agents of the impending removal. At this point, he states that they are to allow the local settlers to just take the remaining supplies at the reservations. This is interesting as all supplies are technically owned by the Indians as they were bought with their annuities.

“The services of Mr. McGruder may be dispensed with, unless you should deem it proper to direct him to collect and dispose of the effect belonging to the Indians, which had been abandoned by them on their removal to the Reservation, or taken from them by the volunteers or citizens.” (1855 12 24 Palmer to Ambrose)

By March 1856, the Native people from the Umpqua and Table Rock reserves at at the Grand Ronde Reservation. Soon after some of the Table Rock people are placed at the Salmon River encampment.

One thought on “Weakening the Confidence of the Tribes, Planning their Removal 1854-1856”