In February 1848, six months after the Whitman Massacre, the settlers in the Willamette valley were very tense, concerned that the tribes would gather together and attack.  Many of the men had volunteered for a militia and were in eastern Oregon for the Cayuse War, so additional citizen militia were established in the valley. Ralph C. Geer was the captain of one company, while Don Waldo was the captain of another. The situation became much more tense when 80 Klamath Indians, friends of the Molallas, came into the Molalla area, to Dickie Prairie, and began harassing people and raising a ruckus. The settlers did not like the Klamaths, who were not from the Willamette Valley, but who traveled around on the trade trails, sometimes with Molalla Indians, and caused mischief.

When the Klamaths were asked to leave, Chief Coosta (Coastno)  defended the rights of the Klamaths to be in the valley stating that they were his kin. In this time period on Oregon history, the territory had not yet been purchased of the tribes, and any suggestion by American settlers that the tribes had no rights to be there, were incorrect. Tribes possess their own sovereignty which predates the United States, and there had been no purchase or conquest of the lands of the Oregon Territory, until the first treaties were ratified in 1853. The United States and Great Britain claimed the territory under a joint occupation agreement, both nations having setup outposts and towns, like Astoria and Fort Vancouver on the Columbia. However, considering all land transfer laws of both nations of the time, exploratory claims, outposts, forts, and even settlement, did not mean full ownership or transfer of title in any way.

The situation in Dickie Prairie continued for several days, with many of the settlers gathering at Richard “Dicky” Miller’s homestead for protection in preparation for driving the Klamaths out of the valley.  Word was sent by messenger to the militias organized at Don Waldo’s place outside of Salem (Waldo Hills), and in a day militias came from Marion and Clackamas counties to help stem the “attack” by the Klamaths and drive them away.

Sources suggest that there was another reason for the actions of the Klamaths. One suggestion was that Cayuse Indians had come among the Molalla to get them to join them in driving the Whitemen from Oregon.

Other historians that a similar action by the Cayuse, and perhaps Klickitat Indians, was happening throughout the region, that, as far south as the Rogue River, these tribes were meeting with other tribal chiefs to convince them to join with the Columbia River Indians and involve them in a war to drive the Whites from their lands. In fact, Klickitat Indians were under suspicion for trading arms and ammunition among the tribes in the south, to help fortify them against the incursion of White ranchers, farmers and gold miners.  Such trade meetings would include news from the north of conflicts, battles and war between the Columbia River tribes and the Americans, and perhaps helped stir up feelings of the need to protect the sovereignty of all of the tribes from the invaders.

At this time, the “Cayuse War” was happening in skirmishes along the Columbia, and may tribal chiefs of several tribes saw what was happening; that the Whitemen were coming in ever-increasing numbers and would soon take all the land and drive the Indians out. Molalla Chief Crooked Finger noted this, and participated in the actions of resistance and retribution towards the Whitemen, not unlike many other tribal leaders.  Numerous reports of small thefts in the valley, as well as numerous reports of Indian men, like Crooked Finger, entering White homesteads and ordering White women to cook for them, suggests that the tribal chiefs were gaining a form of retribution upon the settlers, for taking land without permission, for not paying the tribes, and without paying deference to previous long-term tribal occupation and authority.

Another suggestion, is that the fears of the settlers towards the tribes, were mainly stirred by rumors, and later by stories published in the Statesman Journal Newspaper out of Salem. This newspaper was the “conservative” newspaper for Oregon at the time, and published numerous editorials and letters about Indian depredations upon White settlements on the Columbia and in Southern Oregon. Numerous letters published in the paper called for the “extermination of all Indians” before they could gather their forces and attack the Willamette Valley Settlements. Extermination of the tribes would have eliminated an uprising, but would more likely would solve another problem the tribes posed; they were living on some of the best farmlands, and along the best stretches of gold mining rivers, and by eliminating them, these resource rich areas would immediately become open to White exploitation. Extermination fever was already raging in northern California after 1849, as settlers and miners sought to claim the best resource rich lands, and in the process committed innumerable acts of genocide on the tribes, by joining together as gangs of Ranger militia (reimbursed by the State of California for their expenses). After 1851 the Oregon Gold Rush causes a similar response as genocidal gangs of white militia, also called Rangers, and paid by the Oregon Legislature, committed genocide on numerous Indian villages for minor depredations claims, like theft of cattle or horses. It is more likely that the these action of the Ranger would cause the feared response, and in 1855, the tribes gathered at Table Rock Reservation to live peacefully, become fed up with the continued attacks on their people on the reservation and choose to act. The Rogue River tribes, many of them, gather under Chief John and leave the reservation to fight a total war against all settlers, for the next year and a half, in an attempt to drive the whites from their lands, and save themselves from genocide.

These fears of an uprising of the tribes among prominent pioneers in 1843, prompted them to begin forming the Oregon Provisional Government, of mainly Americans. In 1841-43, during the Wolf Meetings these prominent settlers gathered, wrote, and voted upon laws for the new government, including a law to form an Oregon militia,  created in order to protect the American settlements from Indian attacks. Some scholars suggest that the whole reason for forming the government was to protect the settlements from the Indians. This may have been one of the reasons. the other being to secure Oregon for the United States, and away from Great Britain. Much of the fears by these settlers were stirred by real fears that the war on the Columbia would spill into the Willamette Valley, and include the Kalapuyans and Molallans, while the reality was that these same tribes were so devastated in the 1830s by diseases that they had little will to make war against the Whitemen, even if they saw themselves losing all their lands and rights.

In Dickie Prairie, the settler militia set out to drive the Klamaths out of the valley, and upon meeting them in a small prairie they began shooting, some accounts suggest that the first volley was an accident. Several Indian men were killed in the first volley and a pause occurred when Red Blanket, a Molalla Chief, was allowed to leave peacefully. However, when walking away, he turned back and began shooting arrows very swiftly at the company of volunteers, and he was shot down. The Klamaths were then driven from Dickie Prairie. 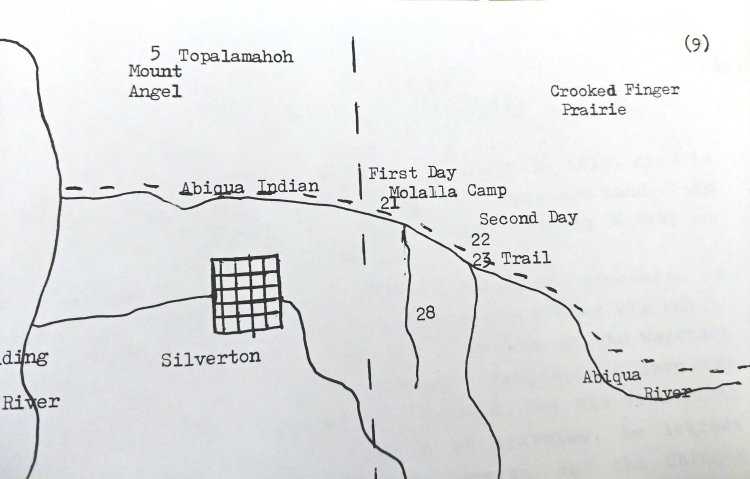 The next day the volunteers again advanced further into the forest and began driving the Klamaths further back, with some back and forth firing of arrows and shot. The next prairie, near Scott’s Mills, saw several Indians killed as they were back up against a cliff. Men and women among the tribe were killed by the volunteers. The Klamaths were driven further south and that evening they crossed the Santiam on their way south.  In all, over ten  Indian men and women were killed by the militia, and several women taken hostage.  When the militia was questioned about why they were so harsh on the Klamaths, as they had only been a bit rude and mischievous at first, the militia leaders suggested that the first attack was a mistake, but that the Klamath Indians did not belong in the Willamette Valley, and the Molalla Indians did.

Regardless of the settlers feelings about the Klamaths belonging in the valley, the Klamaths, or at least a few bands of them, had a regular habit of traveling into the Willamette Valley in the summers. This was likely part of their seasonal round, where they traveled annually into the resource rich valley, to hunt elk, and camp among their friends and kin the Molalla Indians. The tribes were likely interrelated, and had a firm trading relationship. The Molallas were certainly related to the Santiam Kalapuyans, as the daughter of Chief Coastno is recorded as marrying Chief Alquema of the Santiam. The Cascade Mountains from the Klamath Basin to the Willamette Valley is full of trails, and trade routes. One such Klamath Trail lets out near Oakridge, and another extends down the Santiam basin, follows the north Santiam into Salem, follows State Street, and ended at the village of Chemeketa, at the Mill Creek outlet into the Willamette River. One such visit by the Klamaths in 1846 resulted in the Battle Creek incident in the Salem Hills.

The local Molalla Indians did not join the battle at Dickie Prairie. They remained peaceful, and never thereafter caused any problems for the settlers. However, several letters to the Superintendent of Indian affairs in 1851 suggest that the Molalla Indians that remained at Dickie Prairie were harassed by settlers, and some chose to leave. Joel Palmer, in about 1855, was traveling up the McKenzie River basin into the Cascades and encountered a small village of Molallas. Palmer said they had moved south from Dickie Prairie some years earlier.

The above account is as close to the truth of the manner as we can get. There are likely a few other details to be added. There are a dozen or more stories of the Battle of Abiqua in various books and newspapers. Many of the accounts are colored with the racist and romanticist ideas of the past 150 years. Its important to read these accounts closely and meld them as carefully as possible, as well as to understand the culture of the tribes involved. Most of the history is not told from the native perspective and its out role to find that perspective where we can. F0or Crooked Finger, there are transcriptions of his statements during the 1851 treaty with the Molalla. He must have been a powerful character to be around, perhaps one of the most brilliant of his time. He hated losing his land and insisted that the US pay all of the money they were offering in one lump payment. I think he know he would not live long and he is killed a couple years later for entering a whiteman’s cabin without permission.

One thought on “The Battle of Abiqua, Second Battle of the Willamette Valley”