Encounters with Chief Kiesno of the Columbia

Chief Kiesno was one of the most powerful chiefs on the Columbia River at the time of the fur trade and American settlement. He was related to tribes throughout the lower Columbia region. He is well documented in numerous encounters with a number of explorers, fur traders, and settlers. His […]

How the Trade and Intercourse Acts Aided Colonization of Native Lands

Foreword As an instructor in Native Studies and anthropology, I get bombarded with having to explain why native peoples on the reservations live the way they live. People just do not understand why Native peoples live in such poverty and simply remain, seeming victims of their own culture. Students are […] 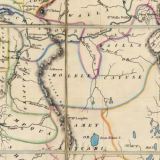 Horatio Hale’s created what may be one of the earliest ethnographies of the tribes of the Pacific Coast. Remarkable as it is, Hale’s ethnography is both interesting and disappointing. Much of his analysis of the Native peoples of Oregon shows his western bias and he does not hide it at […]

The Mills, Second Buildings at Chemeketa-Salem

In the earliest lore of the City of Salem, the location was an Indian village named Chemeketa, next to Chemeketa Creek. Before this village was known by Americans, by this name, in 1812, William Wallace and others of the Pacific Fur Traders built a trading post just north of the […]

The Kalapuyan tribes of the Willamette Valley have lived here for more than 10,000 years, some 500 generations of people. The whole of the valley was owned by these tribes who had distinct yet overlapping territories. A few sections of the valley were owned by relative newcomers, the Molallans, […]