Previous to the seven ratified treaties with the tribes of western Oregon there were two treaties of peace with the Rogue River tribes. The treaty of 1850, is mentioned in a few documents, but no text thus far has been produced (as far as I am aware). However, the 1853 Treaty of Peace is well described in many scholarly texts (Whaley OE, Schwartz 1997), and there is a copy of the treaty in microfilm records (M234 Oregon R. 608). I do not recall that the original treaty has been recovered in federal archives. The treaty is not noted among the ratified treaties of western Oregon, and I have yet to uncover a discussion of the treaty in federal records. The ratified treaty of the the Rogue River for 1853 were negotiated soon after the treaty of peace, 2 days after,  and so the Treaty of Peace was likely ignored or tabled by Congress, if they even received a copy.

The treaty, on-its-face, is very  one-sided. The treaty places the responsibility for the violence and the war, the first Rogue River War (1849-1853, my estimation), squarely on the Rogue River tribes. They are made to give up their firearms, and return all property stolen. Nowhere, in the treaty is there mention of the acts of the Whites against the tribes, of the rapes of tribal women, or the theft of their lands, or acts of extermination on the tribes by the Volunteer Ranger Militia, settlers, and gold rush miners. There are notes that the tribes can bring their grievances to the Indian Agents, but the agents in this period had no control over the miners and settlers. There was also little or no regular US military in southern Oregon, the small detachment at Fort Orford on the coast, could hardly manage the Whites in the region.

There is the suggestion that the tribal people committing depredations are to be given up and placed on trial. During this time, the district courts would not hear Indian testimony in the court, so the trials were all one-sided. Punishment would be hanging or firing squad, and so the chiefs would likely not abide by this stipulation. There was not equality under the law in Southwest Oregon or Northern California for Tribal people. Palmer noted this after catching exterminators destroying two villages on the Coast, whereby he complains that there is no justice for the tribes of Southwest Oregon.

The treaty of peace is based on trust, yet there is little trust between the tribes and the Whites. The US Government had already failed to ratify their 1851 treaty. There continued were numerous acts of violence against the tribes, so giving up their weapons would have made them vulnerable to the actions of the Whites. This situation was likely understood by Palmer, who quickly, within 2 days, arranges for a treaty of purchase of the tribe’s lands, and creates the reservation at Table Rock (ratified April 12, 1854). The tribes were thought to be somewhat protected on the reservation, once a fort was established nearby.

Copy of a Treaty of Peace

Of a treaty of peace made and entered into by Joseph Lane commanding forces of Oregon Territory and Joe, principal Chief of the Rogue River Tribes of Indians. Sam, subordinate chief, and Jim subordinate Chief , on the part of the tribes under their jurisdiction,

Article 1st, a Treaty of Peace, having this day been entered into between the above named parties, whereby it is agreed that all the bands of Indians living within the following boundaries, to wit, commencing just below the mouth of Applegate Creek on Rogue River, thence to the highlands which divide Applegate from Althouse Creek, thence with said highlands Southeasterly to the summit of the Siskiou Mountains, thence easterly along said range to the Pilot Rocks, thence northeasterly following the range of mountains to Mount Pitt, thence northerly to Rogue River, thence northeasterly to the head waters of Jump-off Joe, thence down this stream to a point due north from the mouth of Applegate creek, thence to the mouth of Applegate creek, shall cease hostilities, and that all the property taken by them from the whites, in battle, or otherwise shall be given up either to Gen Lane or the Indian Agent, the Chiefs further stipulate to maintain peace, and promptly deliver up to the Indian Agent for trial and punishment any one of their people who may in any way disturb the friendly relations this day entered into, by stealing property of any description, or in any way interfering with the persons or property of the whites, and shall also be responsible for the amount of the property so destroyed.

Article 2nd It is stipulated by the chiefs that all the different bands of Indians now residing in the territory above described shall hereafter reside in the place to be set apart for them.

Article 4th It is further stipulated that when their right to the above described country is purchased from the Indians by the United States, a portion of the purchase money shall be reserved to pay for the property of the whites destroyed by them during the war, not exceeding Fifteen Thousand dollars.

Article 5th it is further stipulated that in case the above named Indians shall hereafter make war upon the whites, they shall forfeit all right to the annuities or money to be paid for the right to their lands.

Article 6th It is further stipulated that whenever any Indians shall enter the territory above described for the purpose of committing hostilities against the whites, the chiefs above named shall immediately give information to the agent, and shall render such other assistance as may be in their power.

Article 7th An agent shall reside near the above named Indians to enforce the above stipulations, to whom all complaints of injuries to the Indians shall be made through their Chiefs.

Signed this 8th day of September 1853

The above stipulations of treaty were entered into and signed by the respective parties in my presence and with my approval,

The following letter represents a fast action by local people in the Jacksonville area, to claim the money in the treaty of peace. As the treaty was not ratified by Congress, as far as can be determined, the depredations monies mentioned were not available for claims. Still, heartened by the two treaties, a depredations commission was very quickly formed, and the community of Jacksonville set out to claim as much of the money as possible, even without federal approval. In the following years,  General John E. Wool, in 1854, determined that the blame for the violence lies squarely with the settlers, rather than the tribes. Jacksonville was the center of the conflict, the main settlement activating against the tribes of Southwestern Oregon. After the tribes were removed to the Grand Ronde Reservation, in 1856, depredations claims began to be accumulated and compiled for payment. Many of the claims were determined fraudulent after investigations. Depredations claims continued to be received to the end of the 19th century.

Secretary of the Interior

On the 8th Sept, 1853 a treaty of peace was concluded between Gen Joseph Lane and the Rogue River Indians wherein it was stipulated among other things that whenever the Government of the US should purchase the lands from the Indians that a sum not exceeding fifteen thousand dollars should be deducted from the purchase money to pay for depredations committed by them during the late war.

On the 10th of Sept. 1853 Gen. J. Palmer Supdt. Of Indian Affairs for Oregon concluded a treaty for the purchase of their lands. The Board of Commissioners of Military Affairs consisting of Doct. Edward Sheil, Richard Dugan, Geo. Dart and L. A. Davis at the suggestion of Gen. Lane appointed three appraisers to ascertain the amount of property destroyed and which was to be paid for under the provisions of the two treaties above mentioned. The Appraisers Col. John E Ross, Doct. George N. Ambrose and W.W. Fowler were sworn on the 15th day of September 1853 and at once entered on the discharge of their duty. They made a personal inspection of all the premises and took testimony and ascertained the value of the property destroyed to be thirty seven thousand four hundred and twelve dollars and ninty eight cents $37,412.98. 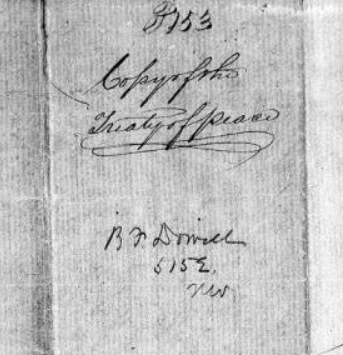 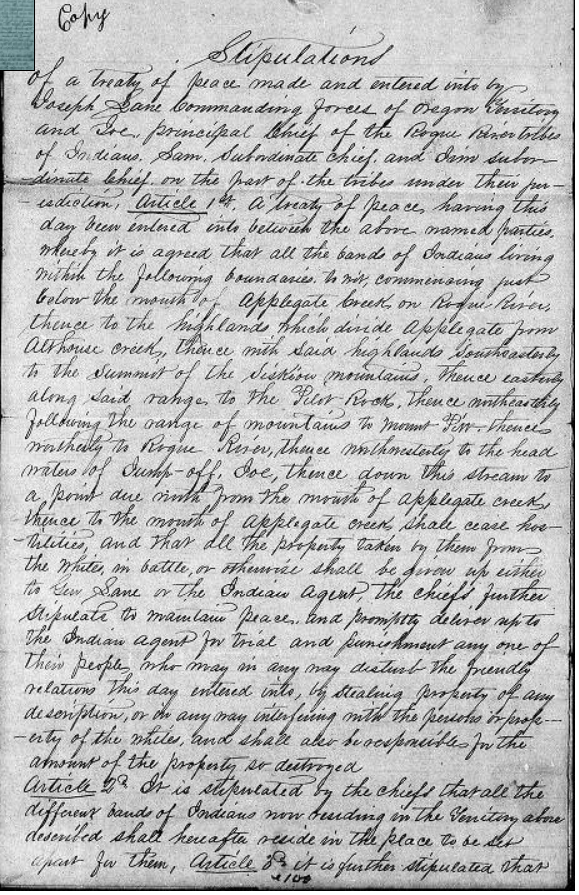 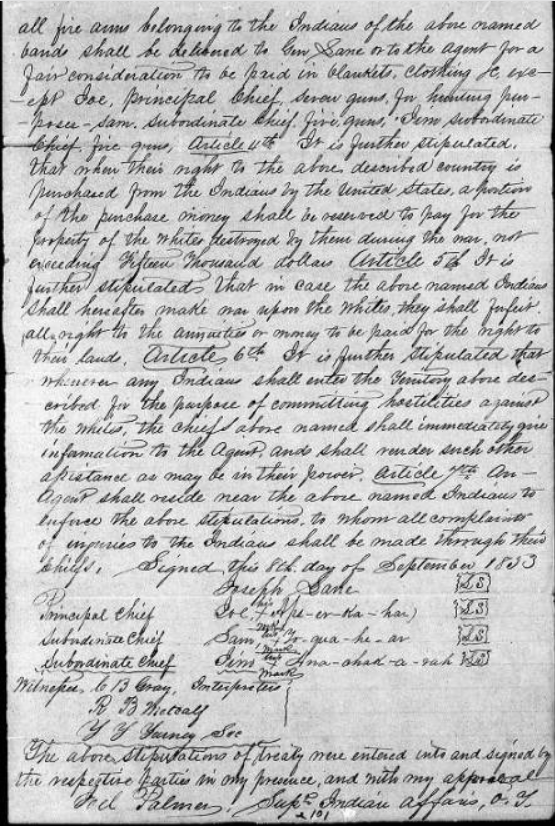 Note the Treaty of Peace is co-signed by Joel Palmer, Indian Superintendent for Oregon, who was at the proceedings

Whaley, Gray, Apserkahar (Chief Joe), Oregon Encyclopedia (the date of the first treaty of peace is given by Whaley as 1851, other records suggest it happened in 1850.)

7 thoughts on “Treaty of Peace with the Rogue River Tribes, September 8, 1853”