William Raymond was a sub-Indian agent from 1851 until at least 1857. He administered the tribes first at the Astoria sub-agency, then later moved the agency to Tillamook. In 1856-1857 he was at the Grand Ronde Indian Reservation. Raymond and his wife Almira were among the members of the Great Reinforcement, a contingent of largely religious missionaries attracted to Oregon by Methodist minister Jason Lee, to aid in the conversion of the Indians from savagery to Christianity. They arrived in June 1840 on the steamer Lausanne, from New York, stopping at Hawaii and landing at Fort Vancouver.

The Raymonds were first stationed at the Methodist Mission at Chemeketa Plains. In 1842 they moved to Wascopam at the Dalles, then back to Chemeketa, and then in 1846 to the Clatsop Plains and a bit later to Tansey point where the Raymonds took up a landclaim and farming. William became fluent in the Chinook Wawa language and in 1851 helped with the translating at the Tansy Point treaty negotiations between the Chinook and Tillamook tribes and the Oregon Indian superintendent Anson Dart. During the negotiations the Indians were struck with small pox where many died. One camp Terwents was completely consumed with the pox and because of this, settlers at Tansy Point would not allow the Indians to come to their houses for relief from the pox, for medicines, or for food, and many died of the disease as well as starved because they could not procure food or medicine. Almira Raymond did try to help by leaving  half of her food stocks out for the Indians.

Almira Raymond had all of her 11 children in Oregon. She spent much of her first 2 years of married life pregnant, while raising children, running the farm, and even adopting at least one Indian Boy. It was common for Indian children to be taken in by settlers who felt a desire to save them and needed their help running their farm. Her days were spent alone, or with no nearby adults to socialize with, while caring for the farm, and in deep religious thought. She wrote extensive journals and letter home of some of her experiences, including describing her loneliness. Her main companion was her husband who helped birth all of her children, but in the 1850’s William was absent much, while caring for the Native peoples in his extensive district. Almira was sickly through most of her time in Oregon and died in 1880. The following is an except of her experiences with the Calapooia Indians.

We find the Indians very wretched and miserable without the blessings of God’s grace or providence. And if ever any needed the gospel, it is the wild Indian of Oregon… We at times go to hold meetings with the Indians… On the Sabbath morning about 9:00 o’clock, we left our tent, following an Indian Trail about a mile and a half. at length we come to what the people here call an Indian village, but to my surprise I found nothing in the form of a house. The Indians had their lodge on a small island near a pleasant stream of water with nothing but the trees and shrubs for their protection. .. Many of them much engaged in gathering camas, a root they use for food. They appeared something indifferent to us, and all around they expressed no surprise at our coming among them. Their only clothing is a shirt, or some wild animal’s skin thrown loosely over one shoulder. And some of them were almost, and others entirely naked. Their only bed was a mat thrown upon the ground. The horses and people all live in one family, and for ought I known on nearly the same plane. In this wretched condition we found them. After singing to them for a half an hour, we collected some of them together, Mr. Raymond then spoke to them through an interpreter. He spoke to them  of the existence of God with some attention.

This remarkable account shows us that they attempted to fulfill the purpose of their coming to Oregon, as missionaries, to convert the tribes to Christianity. Where they lived is interesting. They likely lived in the vicinity of the Indian Institute which was constructed after the Willamette Mission was flooded out. This second Indian school was erected at or near the Wallace Plains north of present day Salem at Keizer.  Later, by 1840, the institute was moved to the Chemeketa Plains, a landclaim whose footprint included downtown Salem, the state Capitol, Willamette University and the Mission Mill. Near either location at Salem there were vast camas fields, where the Kalapuyans dug camas roots as part of their spring to summer root harvesting camps. The village noted by Almira was likely a summer encampment, a temporary living situation, where, after the camas was dug and cooked, the Kalapuyans would remove back to their permanent village for other  fall activities, like hunting, gathering nuts and berries, or setting fires to the Willamette prairie-lands. These people may have been members of the Chemeketa village at  Mill Creek where it flowed into the Willamette River, now under downtown Salem. Its likely that the Wallace Plains north of Salem had extensive camas fields. The Chemeketa Plains was a known camas gathering location for many of the Kalapuyans at different villages in the area.

Following the 1851 Treaty negotiations at Tansey Point, Robert Shortess is fired as Indian sub-agent for the district. He gained the ire of Anson Dart for being too sympathetic to the Indians over land rights, and William Raymond is hired to replace him. Thereafter, the Astoria district is an enigma with rare reports from Raymond. The district was massive, encompassing the lower Columbia as well as the northern Oregon coast, or the territories of the Chinookans, the Clatsop and Lower Chinook, and the northern Oregon Coast with its Tillamookan Peoples, as far down as the Salmon River. The district never had much support or funding, because the 1851 treaties are never ratified and the area tribes are never again approached for treaties. Therefore the majority of funding is at the discretion of the Indian superintendents of Oregon. Because of this the tribes are not resettled until the 1860s. Then the Tillamook peoples are asked to resettle to the Salmon River Encampment, many finally removing by 1877. There are indications that many of the Clatsops and many Nehalems were never resettled because of the lack of funding.

These tribes were not paid for their landclaims until they sued the federal government in the early 20th century. As part of the Indian claims lawsuit they had to prove that they had lived on and owned their lands previous to colonization.

William Raymond’s reports are inconsistent for the Astoria District. The area was very rough and rugged, and was extensive and so there may not have been much time for paperwork as he traveled about the district addressing tribal needs. As well with a family of at least 12 children and a farm, his time for managing the district may have been brief.   Still, what we do have in the way of reports is fairly detailed.

I would recommend the moving of the Agency of this district to Tillamook, The large portion of Indians are there- many who are now here would go there… In visiting the Na-ha-lins I did not find the extensive prairies reported to be there, but an abundance of alder .., the best I have ever seen, it is very easily cleared- the Indians would do well there but they would necessarily be deprived of the shell fish which is in such abundance in Tillamook.

on March 27th 1854 William compiled a census of the Indians of his district. 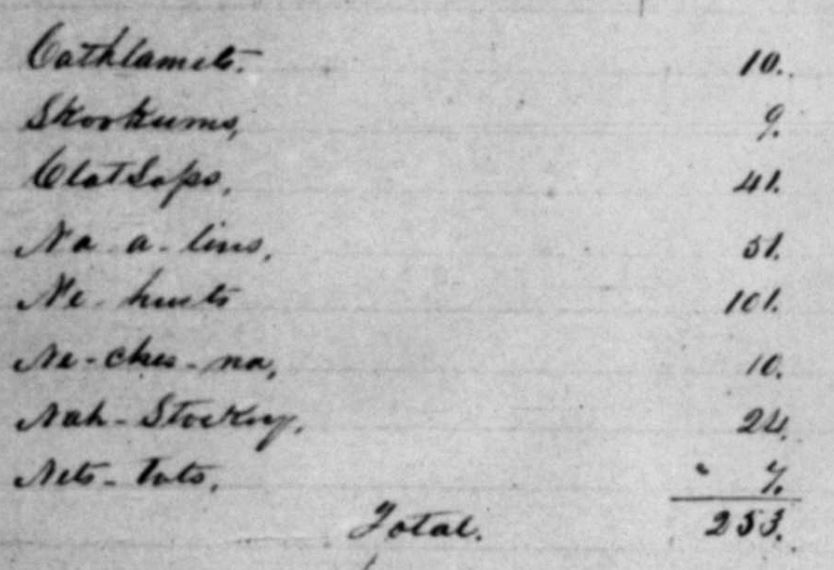 The census of the tribes likely reflects the remaining living members following the smallpox epidemic of 1851.

In the Astoria district, there was extensive illegal trade of alcohol among the Indians by the a sailor by the name of “Jack” and William writes “I made every effort in my power to have brought to justice the supposed guilty one for selling liquor to Indians but nothing could be done. Indian testimony would not be taken before the Grand Jury.” It was Federal Indian policy to discourage the use of alcohol and make illegal all alcohol sales to the tribes in an attempt to protect their morals, and to stop the scourge of the disease of alcoholism. This was one of the main goals of the Indian Agents in Oregon, as many tribal people were seen to be wasting away because of liquor use, and when the Indians were drunk they could then be easily manipulated by disreputable settlers, merchants, and sailors. In addition, alcohol was seen as a leading cause of fighting and deaths at the newly created seaports and settlements.

From 1856 to 1857 William Raymond was the Indian Agent in charge of the Grand Ronde Indian reservation, in fact its first agent for the period of its first year in operation. During this year Raymond was given the task of building and establishing all of the first agency structures. The original plan by  Superintendent Joel Palmer was to use the treaty annuities for the building costs. However, the construction costs rose so high that Raymond was forced to contract the work on credit terms. Palmer is released as an Indian Superintendent in the middle of 1856 and A. G. Hedges takes over as superintendent. Hedges has a problem rectifying the Raymond accounts at Grand Ronde and does not have the money to pay the creditors who are visiting the agency office daily, asking for payment. Hedges requests additional building funds to pay the creditors in his March 1857 general report on the Indian Affairs in the Oregon Territory.

Of Raymond, Palmer writes, “The citizens were opposed to Mr. Raymond leaving that valley, but there was not other agent or sub-agent that could have been assigned to duty at Grand Ronde.” (December 21, 1857, M234 R611)

Raymond is relieved from being Indian Agent of the Grand Ronde Indian Reservation  by March 1857 and is briefly reassigned to the Columbia River.  He was then reassigned back to Tillamook and the Astoria District, which is his home.

William Raymond and his wife Almira become important figures in the formation of the early reservations for western Oregon. They spanned a period from before treaties, to involvement in treaty making, and working with the tribes on planning and building the first reservation at Grand Ronde.