The next section map of the coastline, (770c) begins with Cascade Head and ends at the Cape Meares. Every major feature of the Coast has a Native name. It is likely that some of these native names are preserved on earlier maps. It is also likely that Native peoples on the coast were consulted about the names of various features. The remaining villages in this area was a small settlement of Native peoples at Nehalem (Tillamook) and the people collected at the Salmon River Encampment. Many of the people at the encampment were from the northern coast, yet nearly all of these people would have known the names due to habitual travel and trade between villages. 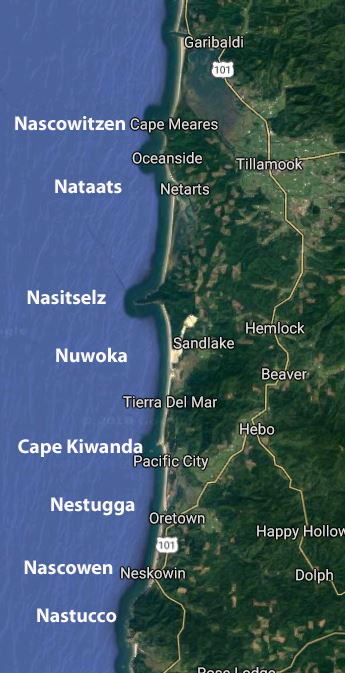 The following descriptions begin in the south and move northward, following the progression of Davidson’s book. 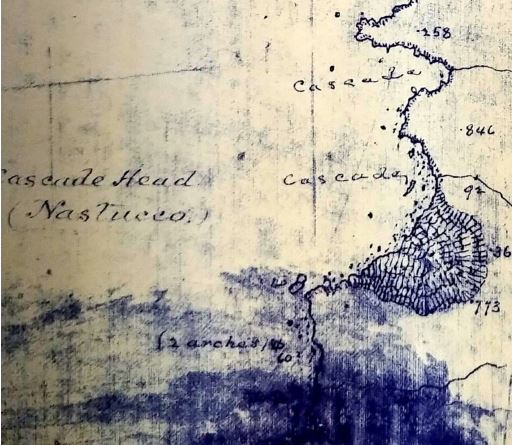 Davidson writes, At this ninety-two feet point there is a small stream breaking through a sharp valley directly upon the sea, and a cascade falls upon the rocky shore. Five hundred yards north of it in a deep narrow cove there is another stream leaping into the sea… These peculiarities prompted us to name this headland Cascade Head in 1867. (427)

Davidson here is claiming that the exploratory expedition named the headland in 1867. He does not mention the name on the map, Nastucco. It is likely that the expedition heard this native place-name and the other Tilliamookan place names on the map, north of the headlands, from the Tillamookan people in the Salmon River Encampment. 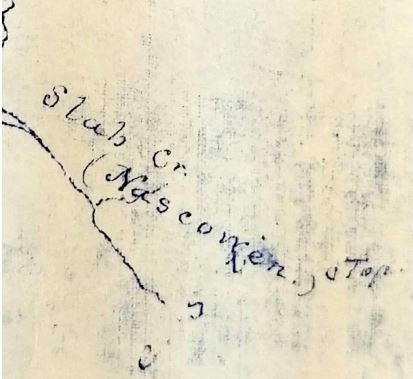 Davidson again does not mention the Native place name of Nescowen. But as the place name Neskowin is used today, and the creek is called Neskowin Creek, the name has survived.  Note that the spelling of Nestucca as “Nestugga” as was common by the settlers in the late 19th century. 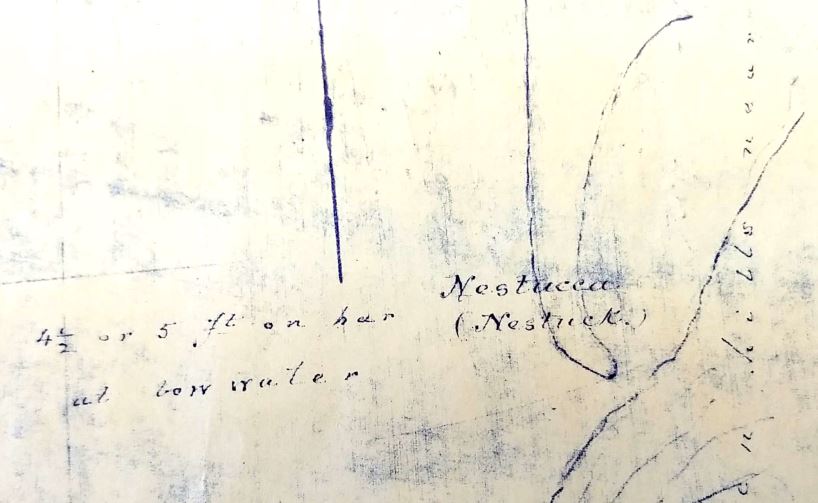 The Nestuggah Bay and River… The reconnaissance of 1850 had no stream in this vicinity. In the reconnaissance of 1853 the same was misapplied, and the mistake has been continued. On the sectional map of Oregon, 1886, it is shown to be the Nestuggah, with a small settlement named Oretown on the Little Nestuggah, and town named Hebo ten miles up the Nestuggah. The Latter drains a large extent of moderately low, rolling country. In 1883 the name of the bay was spelled Nestucca. (428-429)

Davidson again does not follow the map well. He does not present the native name. 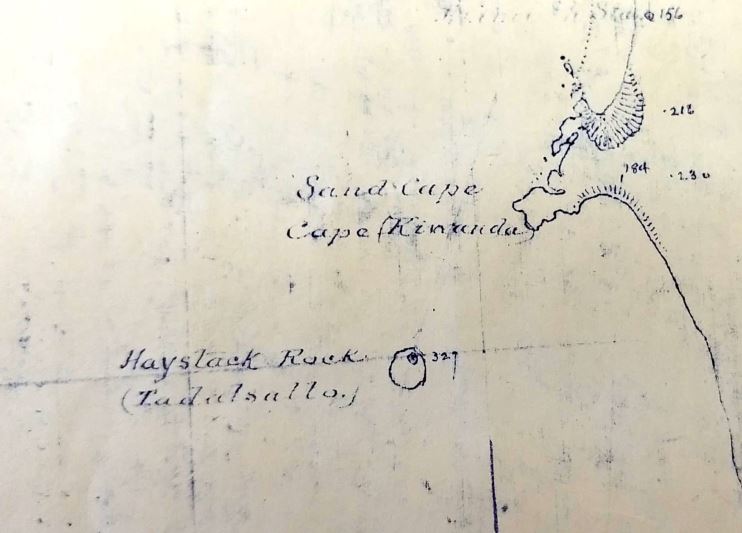 On the afternoon of April 26, 1792, Vancouver laid down this Islet (Haystack rock) on his chart in latitude 45 111/2 ‘ close under the shore. Tebenkoff places it on the same position , evidently from Vancouver, but he has no stream south of it, He has a stream called the Kautie River four miles to the north of it. The Indian name of this rock is Ta-da-sal’-lo. (430)

In 1867 we designated this Cape as Haystack Point in order to give it a distinctive name. In the later reconnaissances of 1883 and 1887 it has been called Sand Cape or Cape Kiwanda. This name is that of an Indian chief in that vicinity. (430)

Update 11/18/2018- Chief Kiwanda was a well known Tillamookan chief in the area and he came to settle at the Grand Ronde Reservation to be informally allotted at the reservation previous to the Dawes Act allotments (1887-1889). He is listed on at least one annual census for the reservation. More needs to be uncovered of his character. 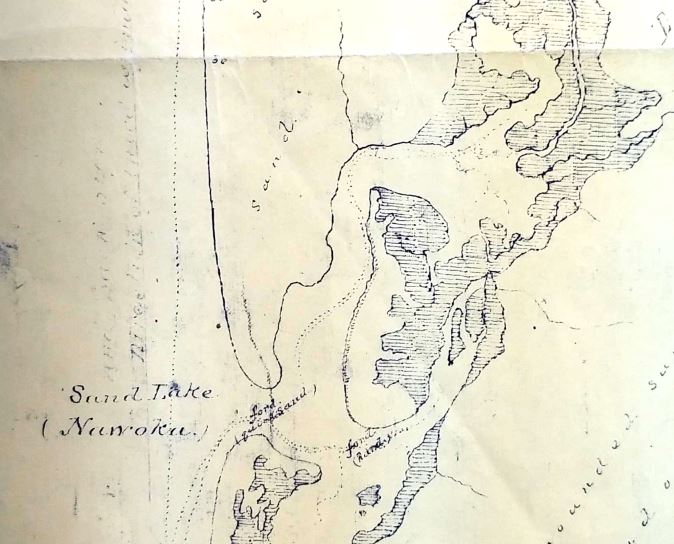 Just two miles north of the Haystack Rock a very small stream of water cuts through the beach. It drains an insignificant pond… two miles further to the entrance of a lagoon nearly three miles long… this Lagoon is locally known as Sand Lake, but the Indian name is Nawuggah or Nawo’ka. (431) 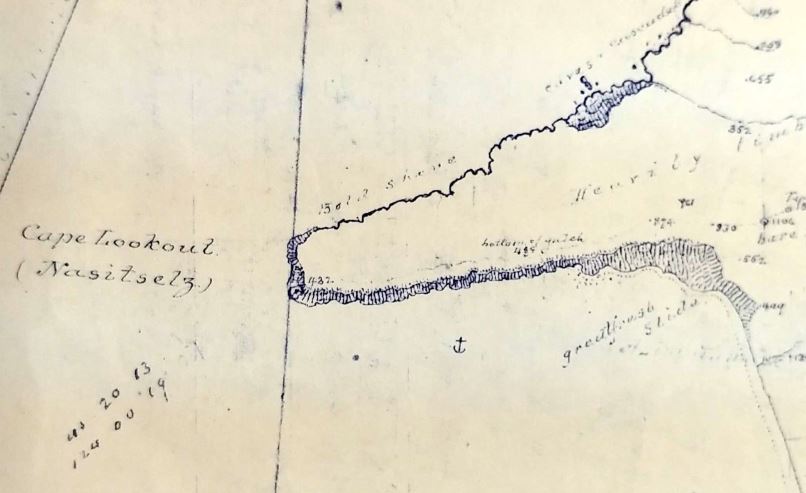 The name Cape Lookout was first given by Meares in July 1788, to the cape, which he fully described as having three large rocks off it… Yet his legend is wildly in error and does not agree with the text of his narrative…. the present name is was applied on the Coast Survey charts of 1850 and 1853 to the Cape… (433) 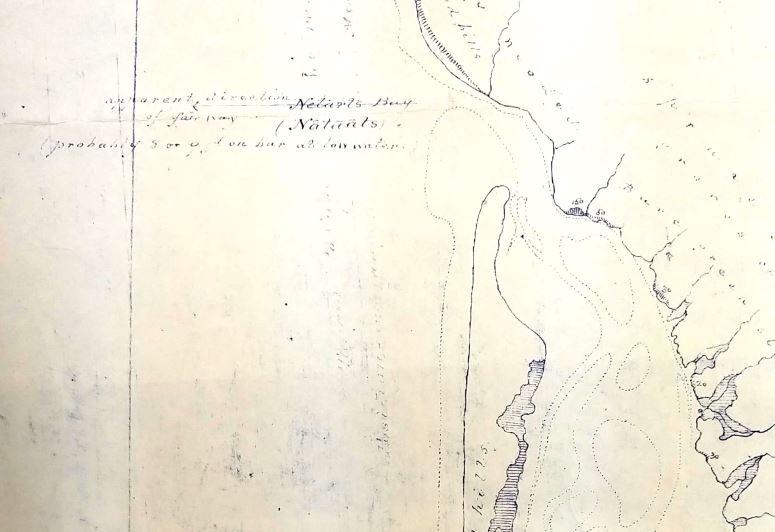 The Na-ta-ats, or Oyster Bay… as early as 1867 schooners had entered this bay for oysters….The end of a long, low, sand spit from the south inclosing [sic] and forming Nataats Bay is narrower at the point…The bay was formerly called Nat-a-hats; on one of the sectional maps it is called Netart Bay; and on another sectional map of Oregon the village of Netarts is located on the Northeast shore. (434)

In the second expedition of the exploration of the coast in 1775 under Heceta and Bodega the former says (August 18, 1775) : a mountainous plain which i called La Mesa will cause all navigators to lay to in the vicinity of Cape Falcon, and although I took no observation it is in latitude 45, 28′, and it can be seen from afar to be of medium height.

Bodega under he same date says that: In latitude 45, 28′, there is a hill, and a table-like which from being moderately elevated made itself visible to the navigators. In latitude 45.30′, there are three Farallones which we have named Las Tres Marias.

In July, 1788, Meares in the Felice, after passing Cape Falcon from the northward says: The distant southerly land we called Cape Lookout. This cape is very high  and bluff, and terminates abruptly on the sea. At about the distance of two miles from it there rose three large rocks, which are remarkable for the great resemblance they bear each other. The middle one has an archway, perforated, as it were, in it center, through which we plainly discovered the distant sea. Their distance from each other might be one-quarter of a mile, and we gave them the name of the “Three Brothers.”

This Cape is very frequently, but erroneously, stated to be the “Clarke’s Point of View.” as described by Clarke in the winter of 1805-’06. Lewis and Clarke probably saw the high faces of Cape Lookout and Meares from Tillamook Head over the point of land visible to them formed the seaward side of Tillamook Bay, they have charted it as such and named it Cape Lookout, but they do not mention it in their narrative… The Indian name for the Cape is Nascowitzen. We applied the present name to the cape in 1857 because the name Lookout had been previously applied to the cape eight miles southward. (436-437)

The Davidson text offers much more description than is transcribed here. There are distance and location notes, as well as information about tides and resources. For a much more detailed analysis of any location I suggest reading the book.