In October 1855, Joel Palmer, Indian Superintendent for Oregon established the Umpqua Reservation in the inland Umpqua Valley. The September 19, 1853 Treaty with the Cow Creek Band of Umpquas created a temporary reservation along Cow Creek (subject of future essay) until they could be removed to a permanent reservation. On Nov. 29,1854 a treaty was written with the Yoncalla Kalapuyans and Upper Umpqua tribes who also lived in the Umpqua valley. Then on December 21st,  1855, Palmer wrote the final treaty of his career with the Molalla tribe situated in the foothills of the Cascades Range also within the area of the Umpqua Valley. A portion of the Molallas or Southern Molalla band of Molalla Indians had been removed to the Umpqua Reservation in November 1855 where in December Palmer met with them and completed the treaty.

I proceeded to work and have collected as many of the Umpquas as I can get. The number of which is two hundred and eighteen of all sexes and thirty five Molallas or Klamaths which live in this valley,…

The removal of the Molallas was not something that he was ordered to do by Palmer. Macgruder had taken this action without direction and so in his letter he then requests Palmer’s help with the legality of his actions.

I am very anxious to hear from you to learn as to the legality of my proceedings in regard to the Molallas or Klamaths, as there is a very great expense incurred every day in procuring provisions for them.

This letter is the first time Palmer had heard of a tribe of Molallas in the Umpqua Valley. Palmer hurries down to the Umpqua Reservation to write the final treaty of his career. Palmer’s letter of January 9 1856 reports on his journey, the extremely rough inclement weather which he braved to get this treaty completed. Palmer was delayed in his return due to high snow, but throughout his time in Oregon he proved to be cast of the mold of the mountain man as exhibited in his numerous travels through the mountains during any season.

The trip to the Umpqua reservation was performed through one of the severest storms that I have ever experienced in Oregon. We reached that point on the evening of the 17th (12/17/1855) where I found nearly three hundred Umpquas Calapooias Cow Creeks & Molallas, under the charge of Theophilus McGruder Sgr. (Palmer 1/9/1856)

Palmer found that the Natives were living in extreme weather conditions, with much sickness through the camps. Palmer’s analysis of the causes is extremely accurate.

The census of this camp gave 89 men, 133 women, 40 boys and 37 girls, many of whom were suffering from sickness, probably induced by a change of diet, being confined to flour and fresh beef, and exposure. They had been hurried upon the reservation as a means of safety and deprived of their usually comfortable lodges and variety of roots, berries and fish and were dying off rapidly. With a few exceptions they were destitute of shoes or moccasins and many nearly in a state of nudity. But few were comfortably clad. Their lodges were mere temporary structures hastily thrown together and entirely not suited to a winter camp.(Palmer 1/9/1856)

Palmer’s observation that their sickness is related to a change of diet, and to exposure,  suggests that federal employees and perhaps the settlers, knew what they were doing to the tribes when they were forced onto reservations without adequate funding or access to resources and services to keep them healthy. Macgruder writes that,

There has been much sickness with them mostly the flus with two children have died, (Macgruder 11/24/1855)

However, despite the conditions on the reservation, the tribes were willing to remains as it afforded some protection from the vengeful and murderous whites in the area. MacGruder describes several attacks, including,

Their conduct since they have been on the reserve had been such as would warrant the greatest Safty [sic] of the people on their part it speaks for them that they have been trespassed upon by the whites, as an action which took place in the Lookingglass prairie clearly illustrates there was camped near the house of Mr. Arrington a party of some seventy five friendly Indians of which there was twenty two men which it appears had pitched their tent there for the safty [sic] of themselves as Mr. Arrington had told them that in case they would come close to his house they would not be molested. They had not been camped their but a few days when a party of twenty five or thirty men made, on the 23rd of October [1855] an attack upon them killing three men and wounding one squaw which afterwards died from the wound, the party alleging that the Umpquas was harboring hostile Indians of which there is no evidence. (MacGruder 11/24/1855) 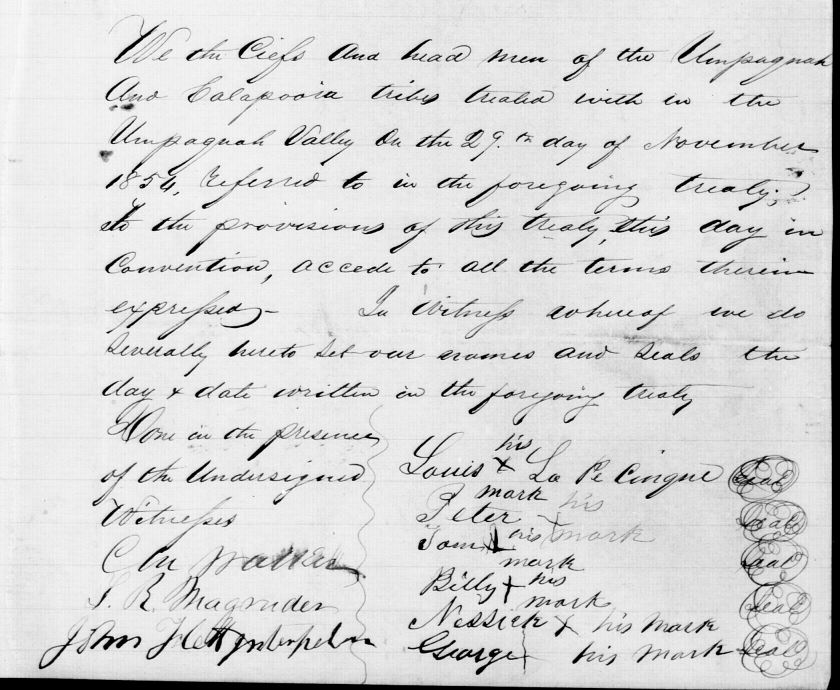 Of this treaty, there is not a lot of information. Fortunately, Palmer did write a description of the negotiation of Molalla treaty of which the above treaty appears to have been an addendum too. Palmer wrote,

Among the number assembled were the head chief and twenty-eight of the Molallalas of Molelle Tribe of Indians inhabiting the country along the Western Slope of the Cascade Mountains, east of the Umpqua and Calapooia Purchase on the head waters of the North and South Forks of the Umpqua River. These Indians were desirous of being confederated with the Umpquas, but desired to reside in the Umpqua Valley. Mr. Walker who had been directed to proceed me with horses to aid in the removal, has submitted the question of removal to the Indians but no definite arrangement had been made, as some were averse to the measure. The young men desired to go, but a few of the old men were opposed, saying that they had but a few years to live. The 20th ult was set for a general talk, and the Indians directed to consult among themselves on the propriety of confederating with the Molallala, and all going to the Coast Reservation. The council met according to appointment but the head chief of the Umpquas not being present they were unwilling to give a positive answer. The head chief arrived in the evening, and the Indians reassembled in council on the 21st and a treaty which had been drawn up in accordance with the suggestions made them was fully explained. The head chief who understand and speaks English quite well spoke in its favor and urged his people and the Molallalas to accede to the terms declaring himself ready to go where he could have peace and safety. They then all consented, and the chief of the Molallalas and three of his principal men signed the treaty. With the exception of two of the Umpqua chiefs who were sick, all the chiefs of the bands embraced in the treaty of the 29th Nov. 1854 signed the treaty and those two chiefs were willing to remove in the spring or when the streams and roads might be in a favorable state.

The Chief of the Umpquas that could speak very good English is likely Louis Nepisank (note: he is the head chief “Louis Le Pe Cinque” (various spellings). Nepisank is an adopted chief of the Upper Umpquas who had been a French Canadian fur trader with Hudson’s Bay Company. Deep rumors suggest that Louis was a member of the Nipissing tribe of Canada. In fur trader records for Oregon the Nipissings are sometimes referred to as a group of fur traders, or hired Indian scouts and hunters in the employment of the fur traders.

As noted in previous essays, this is the only western Oregon treaty which specifies that the tribes are to remove to a reservation at the Yamhill Valley river.  This is because the idea of the reserve, which became Grand Ronde, was not fully formed until late in 1855, about the time that Palmer made an impromptu trip to the Umpqua to write this final treaty. The Molalla treaty was not ratified by Congress until 1859, likely because there was not a direction from the Indian Office in Washington, D.C. to make this treaty. The treaty boundaries are very strange, a dogleg structure within the Cascades and foothills, above the Umpqua valley.

The Molallas that Palmer writes about, may not be all of the Molallas, as there is noted that there remains a band of them in the Cascades yet. It is unclear whether all of these southern Molallas are gathered up and taken to Grand Ronde, or if it is true that some of the Molallas were removed to the Klamath reservation.

The Annual report of the Commissioner of Indian Affairs for 1866 notes a few bands of southern Molalla not yet removed to a reservation and states the plan to send them to Klamath Reservation.

“Of the straggling Indians there are a few in southern Oregon. Thirteen Molalles are at Flounce Creek, on the headwaters of the Rogue River (the noted homeland of this tribe in other accounts); a little band of the same tribe are on the Cascade Range further north; and I have just learned that there is a little band, I know not of what tribe, on south Umpqua river. If provision is made for the maintenance of these stragglers on the Klamath reservation, I apprehend no difficulty in removing them there.” (90)

Many tribes and bands went up into the Cascades to hide when war came to Southern Oregon. The white volunteer militias and settlers did not discriminate in their retribution for war-time aggression by other tribes.

This essay points to a number of inconsistencies in the historical record as has been commonly understood. The tribes in the Umpqua valley were not immediately removed to the Umpqua Reservation, and that the reservation and the removals occurred at the same times as war is erupting on the Rogue River. The Umpqua reservation then may be a response by the government to keep the Indians safe and the whites safe. The Cow Creek Band of Umpqua, were not “Umpqua Indians, ” but in fact Takelman speaking peoples who lived in the Cow Creek Drainage of the Umpqua. They very well may have had more in common with the Takelmans- the original “Rogue River” tribe than the other peoples along the Umpqua or in the valley. That also the Klamaths and Molallas in this valley may be seen by the Indian agents interchangeably. That the Molallas and Klamaths were removed to a reservation by federal Indian Agents before they had a treaty may have been highly illegal. Certainly the United States had no legal jurisdiction over the tribes that did not have treaties (however mach they claim they did)  and as there was not a state of war between these tribes and the U.S. it does seem highly illegal.