On 10/26, 2019 I visited the Open house at the Oregon State Archives, Salem, OR, and was supremely disappointed at their new exhibit Rust, Rot, & Ruin, which documents the beginning of key industries in Oregon through the boomtowns founded by gold mining, logging, farming and ranching,  and other mining. Some of these industries produced company towns, which have since become ghost towns, largely abandoned by the original settler families who made their wealth off of these natural resources. 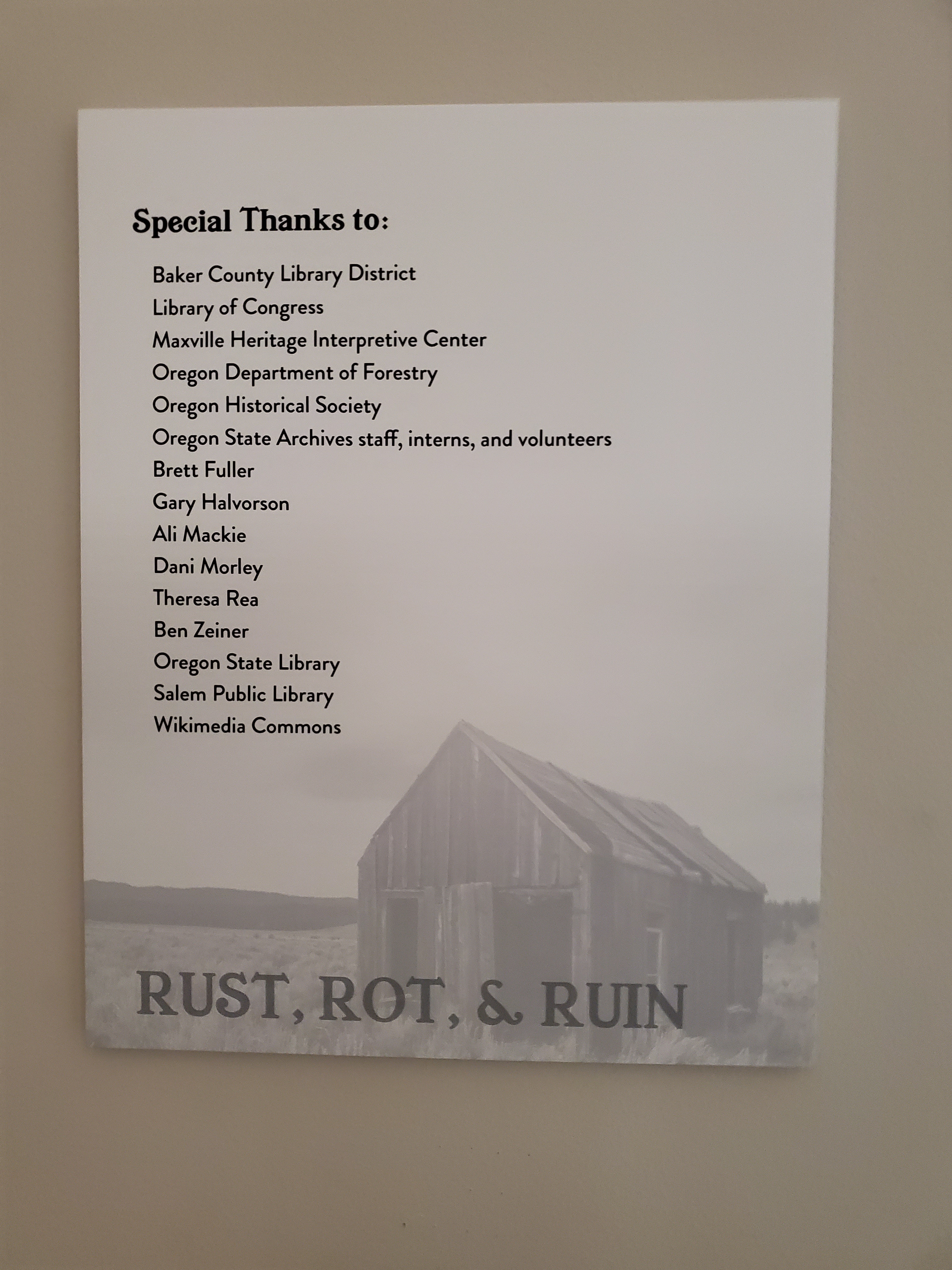 The text has few, very few, mentions of Native peoples and Chinese people. There is a panel on the Chinese laborers and one section of a panel on native peoples of the coast.

The perspective portrayed in this exhibit privileges the white pioneer perspective, and their acquisition of wealth, and ignores and glosses native perspectives and experiences of having been invaded and exposed to violent conflicts over resources, including genocide, and war, by settler white people who sought to destroy Tribes for economic gain. 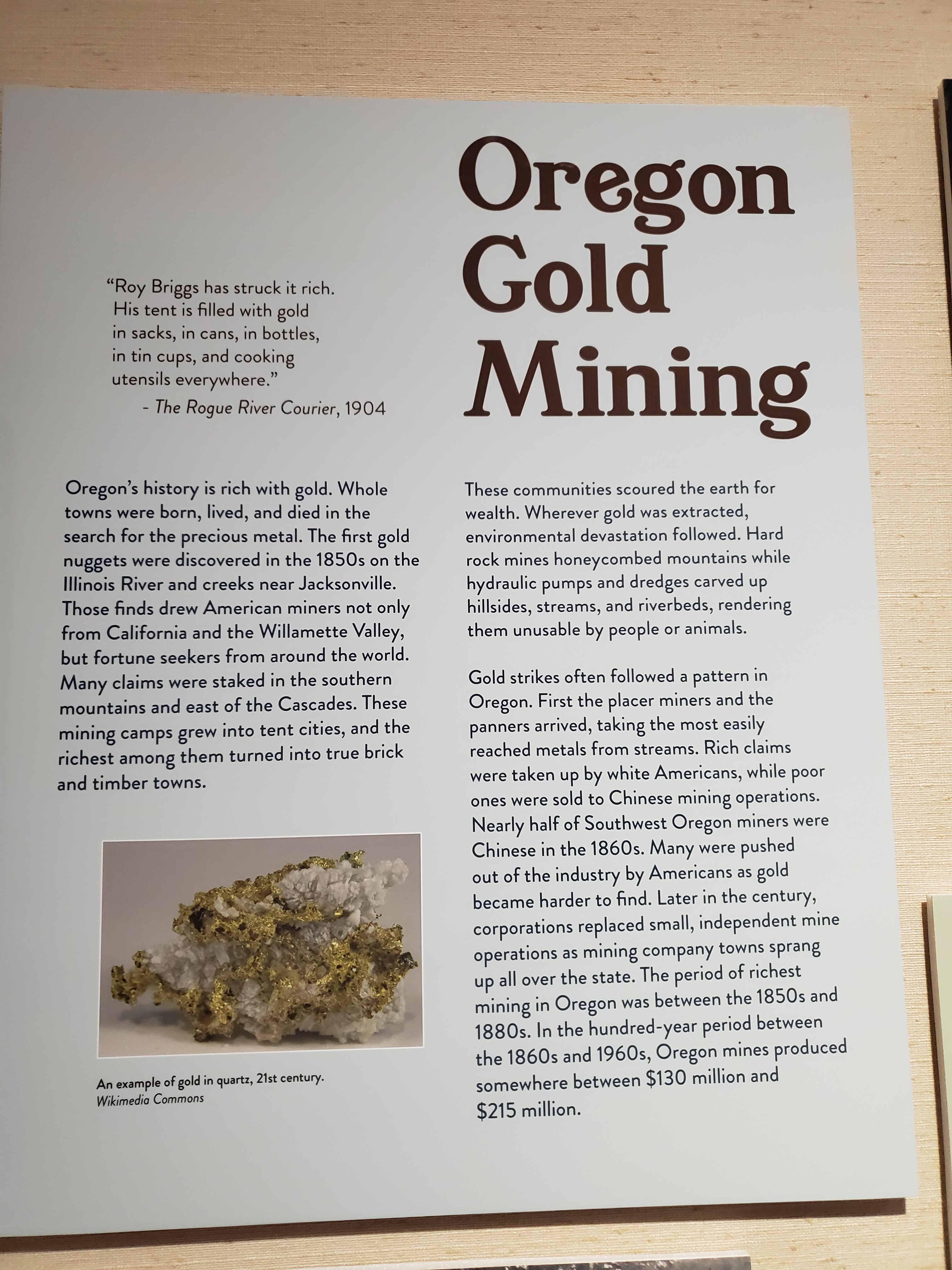 The exhibit is meant to highlight photos and information available in the Oregon State Archives, but replicated history as written 30 years ago and previously which privileges and normalized white perspectives and experiences over all others. 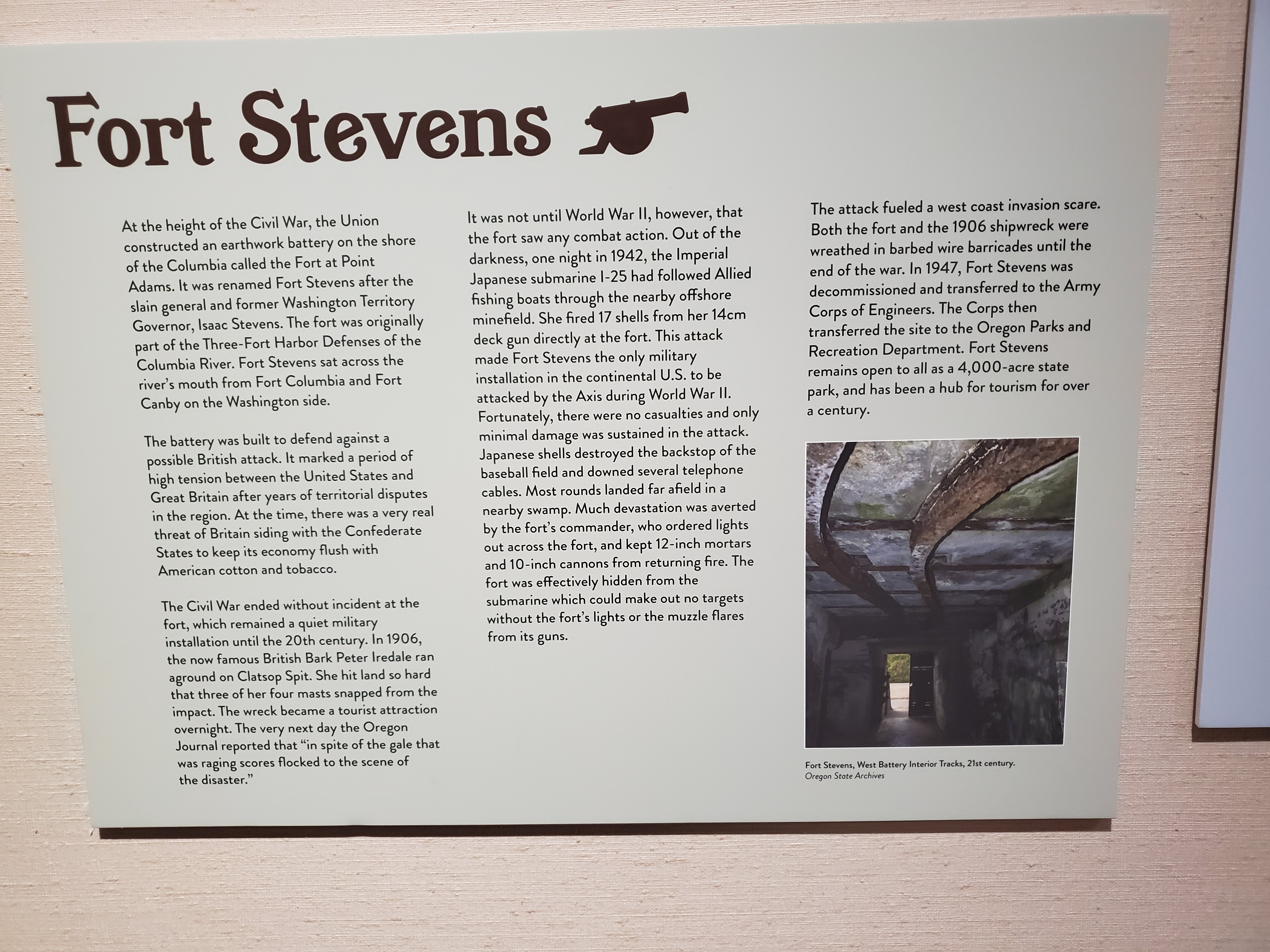 I suggest people view the exhibit and see for yourself, but for me, it is a statement by an Oregon state institution that ignores the work of contemporary scholars to tell the story of all peoples of Oregon rather than a select and privileged few, white settlers. 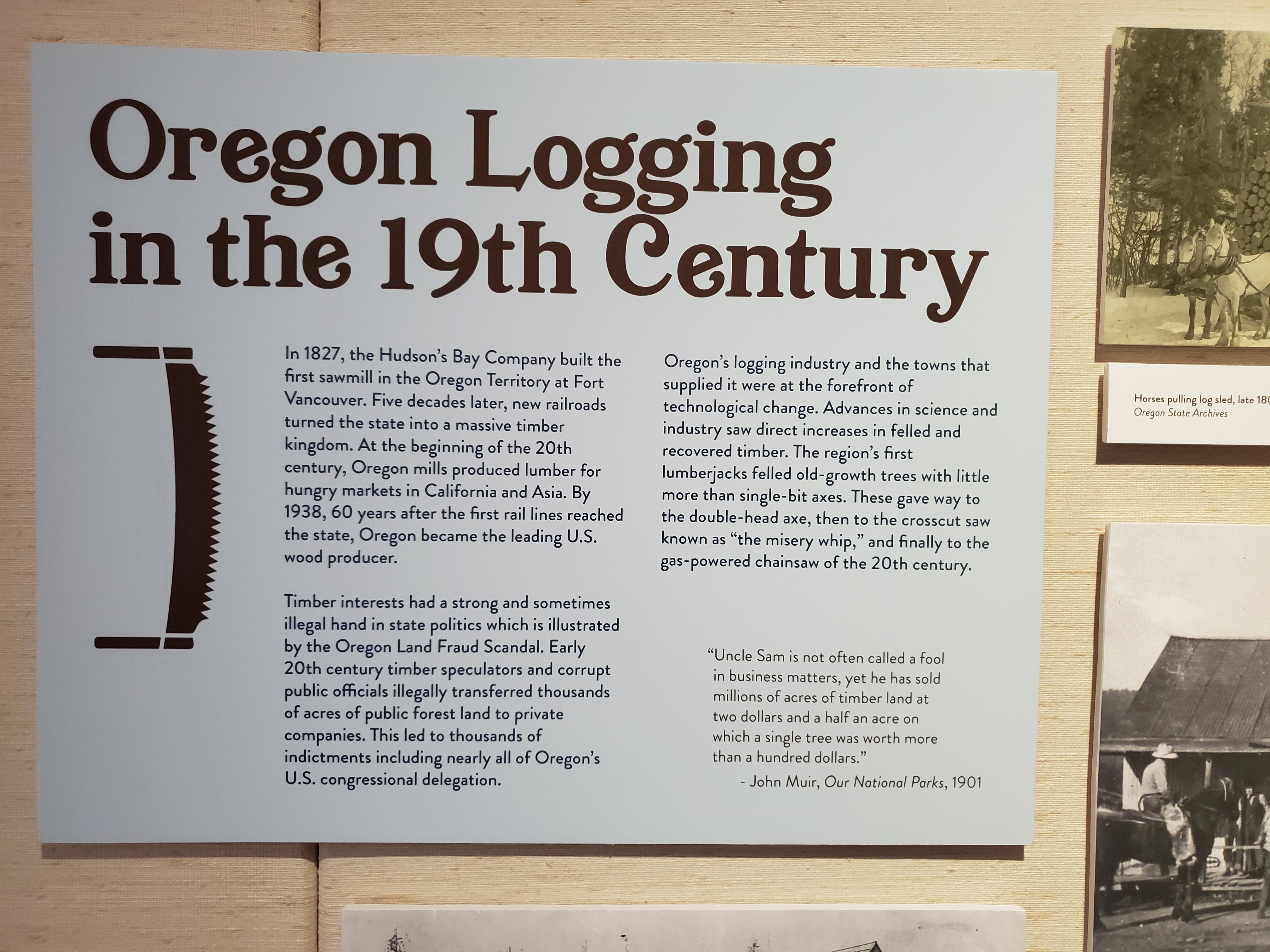 It is literally practicing and aggrandizing manifest destiny in this exhibit’s portrayal of Oregon history. 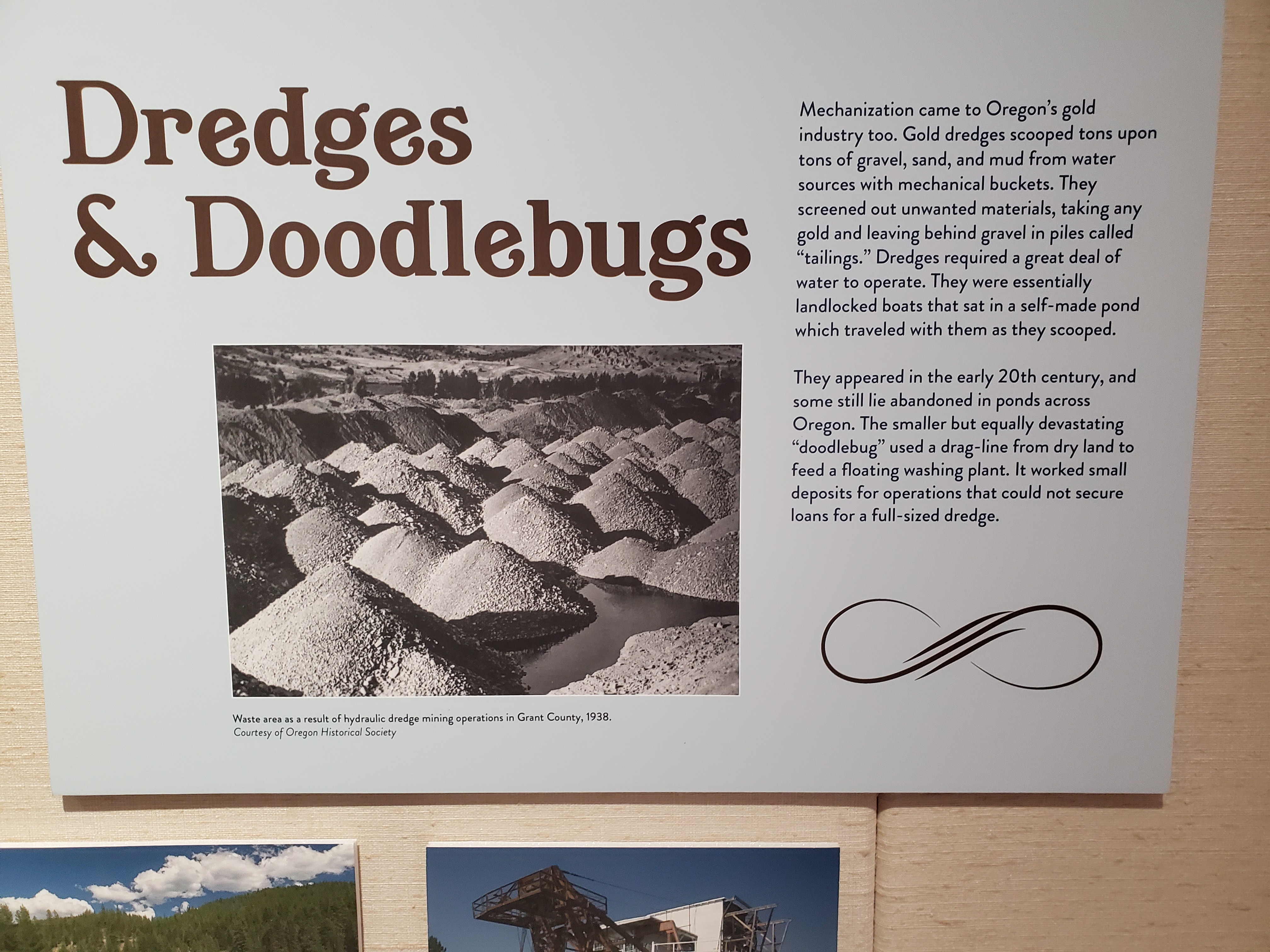 I have had many positive projects within the archives in the past and do not believe that the exhibit is the product of all of the staff. It clearly was not fully vetted and reviewed with an eye toward telling the whole story of the colonization of Oregon.

Critics of this criticism may suggest that exhibits like this do not have to tell the whole story and can simply address enough of the story to fulfill their narrow subject. This may very well have been the intention as I think the archives wanted to tell the story of Ghost Towns and wanted to show how the original boomtowns, formed in the settlement of Oregon around gold, timber, or other industries became the now famous ghost towns of the present. 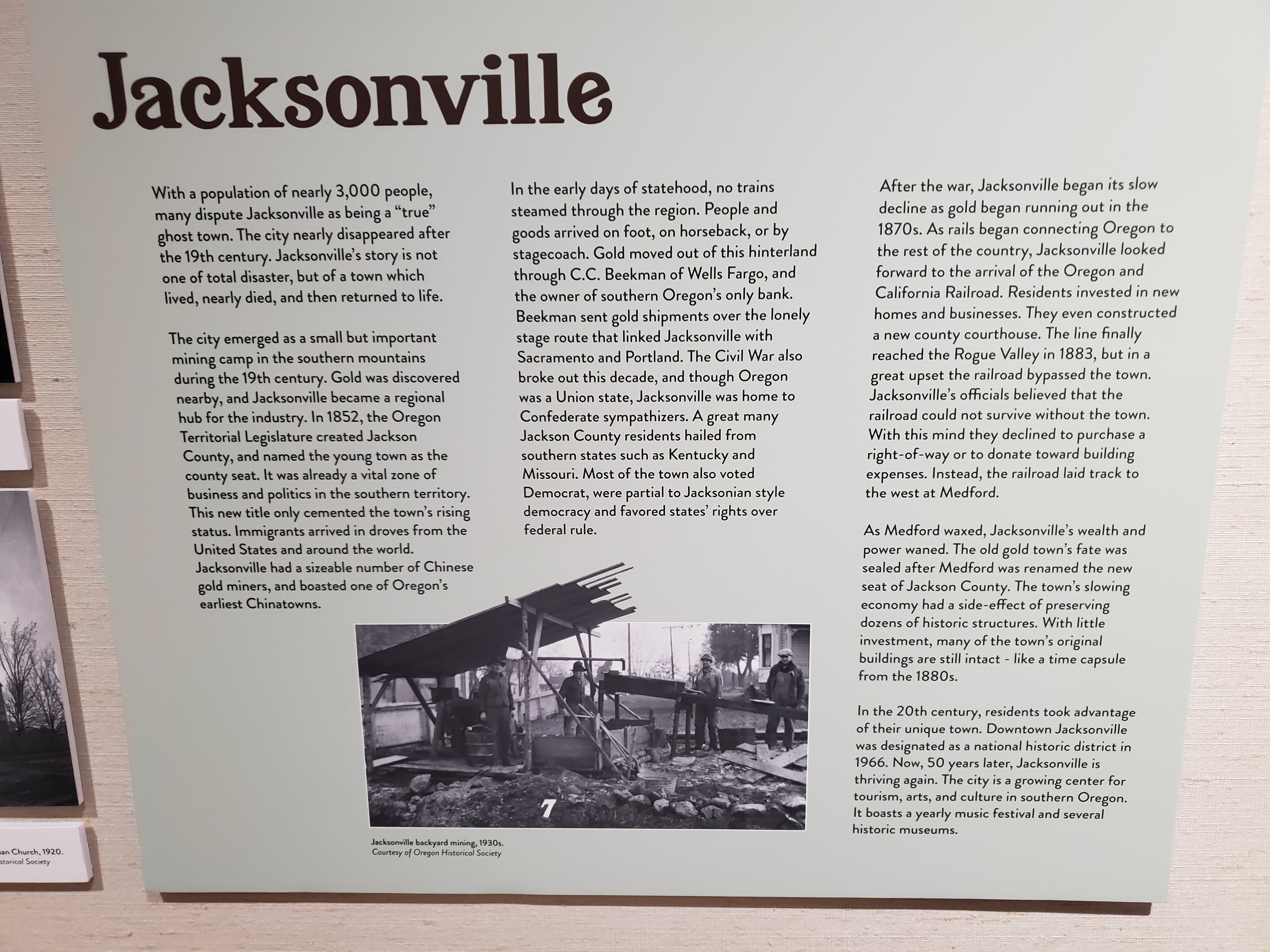 However, in the process of telling the biography of these boomtowns, there is presented the story of their formation. That story certainly needs to reflect the truth of colonization, and its effect on other human societies, tribes, whose descendants are today citizens of Oregon as well. The native story is hugely glossed by the narrative text offered. what is offered is a standard statement of the previous existence of tribes without the violence they experiences while settlers sought to take their land and access resources in their lands to create the boomtowns of the story. Settlers literally carved, forcefully space within tribal lands for their personal wealth, and in the process destroyed native communities and societies. Areas of the Oregon coast, like the Chetco area, in 1855 saw white genocidal actions as settler entrepreneurs sought to clear tribal villages from the Chetco River in order to create ports and other services for the gold miners to spend their gold in. A bit earlier,  in 1851, the town of Port Orford was built on the Oregon coast, forced onto Sixes tribal lands, over their forceful protests and actions.  In 1855, the Rogue River region saw a war caused in large part by volunteer militias based in Jacksonville- one of the towns spotlighted in the exhibit as a typical boomtown began by gold miners. 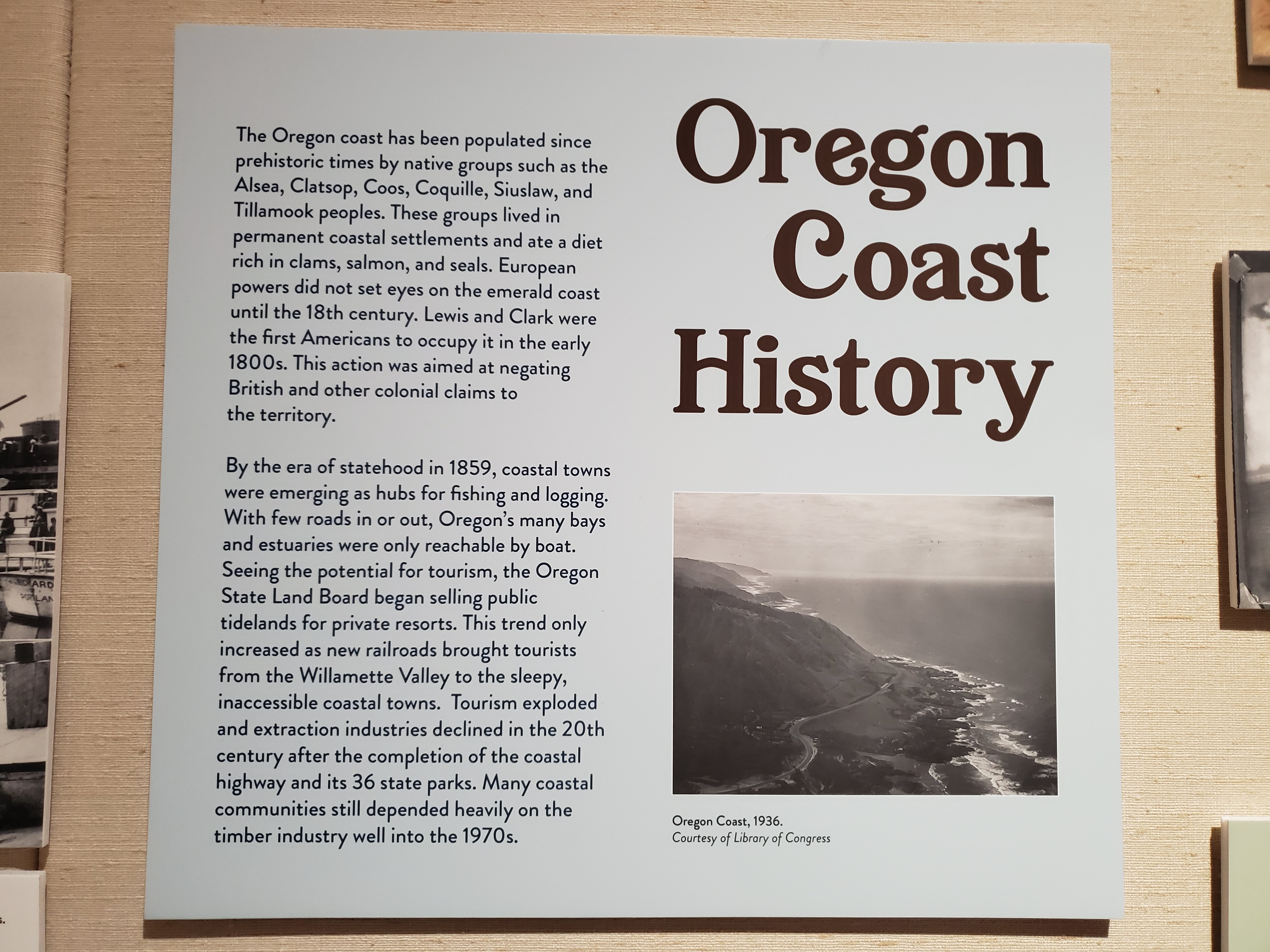 Then the text addressed farmers and Ranchers in mostly eastern Oregon. These large land claims were forced into tribal traditional lands, which caused multiple wars as tribes were first forced onto reservations and then completely removed from Oregon. The Bannock Indian war and The Nez Perce war were both caused by increased settler pressure and encroachment into tribal lands, eventually forcing tribes to flee for their lives, and eventually being removed to other reservations or outside the state completely. The same situation exists for the Modoc Indian war. The whole of this removal of the tribes served to open more lands for white settlers, and as none of the militia was event held accountable for illegal actions, their crimes of murder, encroachment, genocide, and many other horrible crimes became inculcated in Oregon history as a righteous action by Oregon’s pioneers in defense of their manifest destiny over the state of Oregon. The exhibit literally enshrines this narrative further by not telling the story of the tribes.

Finally, tribal peoples, Latinos, and others were laborers in these early industries and helped develop and grow them into the powerhouses they became. The exhibit only mentions Chineses laborers and ignores racism against the Chinese after their labor was completed. Numerous other ethnic peoples were also laborers in these industries, Japanese, Hawaiians, Basques, Russians, Blacks, and Scandinavians to name a few. 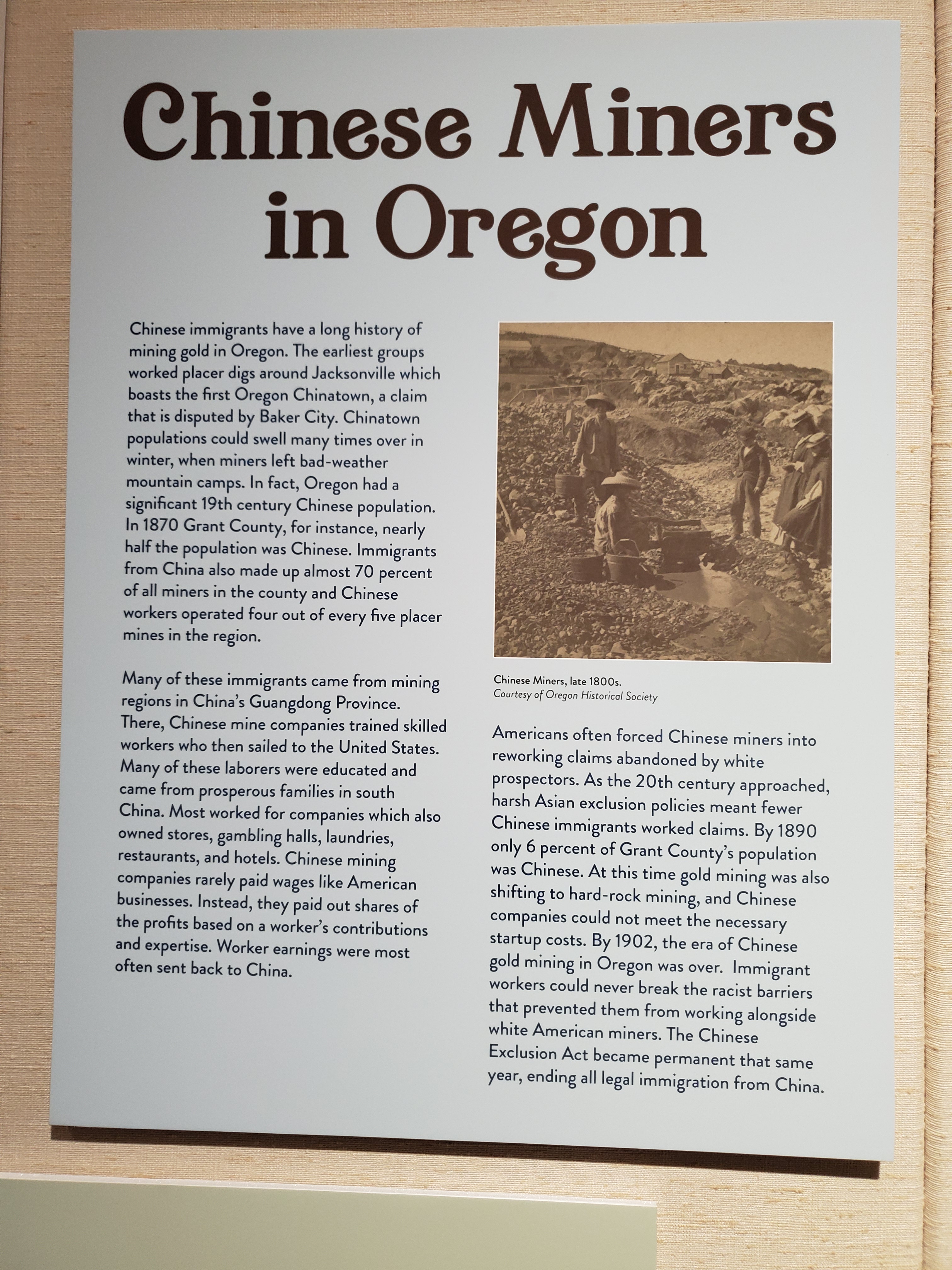 There is an implicit responsibility in all such exhibits to tell the complete truth of how history happened, and I cannot say that this is what was intended by the curators. It is meaningful that this exhibit is presented by an Oregon State institution.  All such state institutions are supposed to have some measure of Tribal liaison and the tribes of Oregon are recognized by the state as being other sovereign entities in Oregon, so much so that there is a Tribal Affairs office within the State Capitol building, a mere 4-5 blocks from the State Archives. The process of tribal liaison is clearly not working here.

Oregon history of a century ago, up to about the midcentury, was written to aggrandize white Americans and their founding and creation of Oregon. That history, like the one shown in this exhibit, is hugely biased, tell only stories of white men, and largely ignoring the stories of all other ethnic groups or even white women, unless they fit into certain themes. These themes were stories of the superiority of white civilization, the holiness of the mission of white men practicing manifest destiny while saving tribes from their savagery, the extreme hardships white pioneers endured on the 9 month Oregon trail, the amazing contributions of the explorers in founding Oregon for the United States, and the stories of conquest over the tribes normally written as bloodthirsty savages bent on the savage destruction of white civilization. Unless the tribes fit into this narrative they were ignored. Rarely if ever were tribal peoples asked their history, and few other ethnic minorities were similarly regarded as possessing any history. As such, without other perspectives, Oregon’s history was severely abridged and stunted. It is really only with the contemporary inclusion of other perspectives that we can approach a deeper, fuller, and truer history.

It is extremely disheartening, knowing how much work that the tribes have done to tell their stories, as well as how much work I have personally done in the Willamette Valley to tell tribal stories in numerous exhibits (Mission mill, Washington Co, Linn County) as well as this blogsite (over 380 essays),  and through hundreds of presentations. Then, the State Education Department is right now testing a new native curriculum, a project which has seen a lot of notoriety and attention in the media, to help educate students in the state about Native history and culture. It’s disheartening that there is so much well-researched and inclusive history available but that the curators of this exhibit chose to ignore all of that to tell a much-dated version of Oregon history.  Our government institutions should know better, and many people in them do know better, and our government should be expected to tell a better story of the formation of our state, a story which does not ignore hugely important history in favor of a narrow story of how well manifest destiny worked.

All photos are my own, taken at the public Open House.

8 thoughts on “Ignoring Tribal History in a Contemporary Exhibit”