In Record Group 75 (Bureau of Indian Affairs) microfilm are many millions of records of the tribes as they were being managed by federal Indian agents. The M234 and M2 microfilm relate to the Oregon superintendency. They are generally in good order, but some miscellaneous records have been gathered into the final films. These miscellaneous records are not well researched and used in research. Occasions dips into these microfilm can reveal information vital to understanding key sections of history. This is the status of Joel Palmer’s ledger of vouchers. Palmer appears to have ordered created a ledger for much of his records, ledgers of letters written, ledgers of letters received, and ledgers of his travels. His travel ledgers, or travel diaries are known and recently transcribed by the Grand Ronde Tribe. But another ledger, his voucher ledger is not yet well known nor transcribed in full.

This voucher ledger is dated May 4th, 1853 to July 31st, 1855. There is likely another ledger of later vouchers paid as well. Many of the actual vouchers are in the regular correspondence series of M234 and M2 microfilm collections. A few may also be in Oregon Historical Society collections, or the University of Oregon Special Collections, Palmer collection. These collections are now digitized online as the Palmer papers. Since many of the payments noted in the voucher ledger are very small amounts or in cash, there may not be another record of the payments.

Finding the records can take some time. After they are found and transcribed and compared with other records then we can figure out what they mean. This is the case with a section of the ledger then relates to the Willamette Valley treaty. The treaty was negotiated in January 1855 and sent to Washington, DC on January 22nd. The treaty was ratified on March 3rd 1855. The negotiations of the treaty was the result of a lot of organization on the part of Joel Palmer and his employees to arrange transportation, meals, and gifts for tribes as they traveled to Dayton, Or. Terr. and sat with Palmer for 1 to 4 days for each tribe.  Then once the treaty was ratified, there were additional actions to fulfill treaty obligations to be made by Palmer. He had to create a set of temporary encampments and pay for the coordination of these encampments, pay special agents to care for the tribes, pay for supplies to be transported and messengers to make runs around the region. Palmer had to appoint regional sub agents to care for all of these duties towards the tribes, while Palmer himself was taking care of finances and dealing with other tribes yet to be placed under management, other Indian reservations throughout Oregon, and work with the army to halt wars in Washington Territory, in Southern Oregon and In the Modoc area.

The following is a section of the Voucher ledger which documents payments to agents and other folks in relations to the negotiating of treaties and making arrangements with the tribes for removals to encampments. Many of the vouchers can be read as a short timeline of removal of the tribes, as well as a details of how they were cared for by Palmer.

The transcription begins in December 1854, suggesting how far in advance Palmer began planning for setting up negotiations with the tribes, as well as how long it would take for tribes and other to travel throughout the valley. The decision about the which reservation these tribes were to go had yet to be made, but at this time all of the tribes were slated for one reservation in western Oregon, the reservation on the coast, later called the Coast Reservation, yet to be surveyed, mapped or created. Grand Ronde Reservation was not even imagined at the time of these ledger entries.

Expenses incurred in the above service, $13 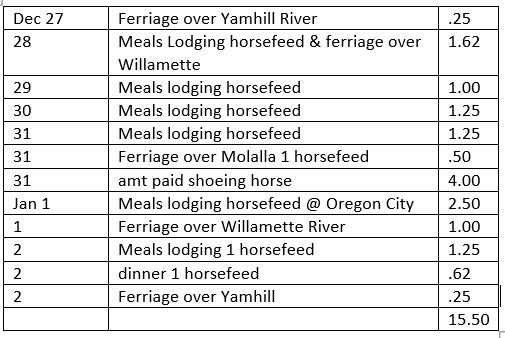 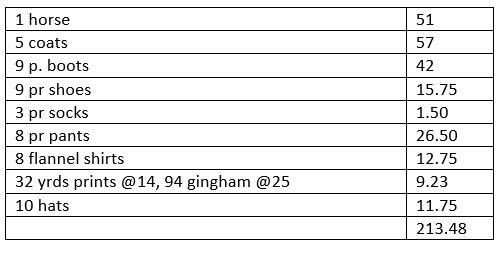 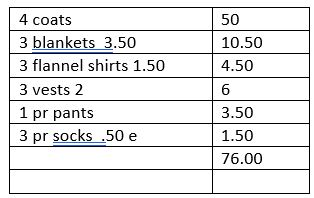 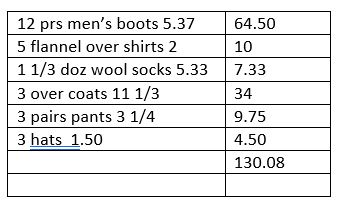 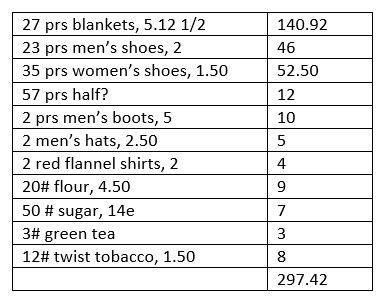 The attention paid to the Tumwaters and Clackamas early in the process is telling. There is not a lot of detail as to how well connected these tribes were to the Willamette Valley treaty and there remain questions about how many of these tribal people were part of signing the treaty and then removed to the Grand Ronde Reservation, yet to be planned. The vouchers to their care suggest that they were integral to the process and the plan was always to include them in the treaty and future reservation. The Numbers noted for the pairs of pants, shoes and shirts also suggest that the tribes were at least 23 men, and 35 women. The boots, hats, and red flannel shirts are counted at 2, suggesting these were wealth items for the chiefs. So there may have been  25 men and 35 women in the 2 tribes at this time. It may also be the case that these were the only people in the tribe to show up at the treaty negotiations to get presents. There are later notes of payments to Switzlers, an early settler on the Columbia near what is a country club today, where the encampment was settled by these two tribes between October 1855 and January 1856. This is likely what happened to the Neerchikoo Chinookans at Blue Lake, they were removed to Switzlers as “Tumwater band” people. 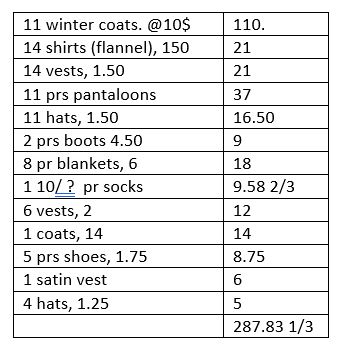 Jany 22, Dr 17, Tow ye Colla or Louis chief of the Santiam Bands to defray expenses of delegation to negotiations: $25 [note this is probably Tiacan as is written in the treaty]

Meals lodging & horsefeed for superintendent & taylor, & interpreter while distribution goods to the Wallalla Band of Tumwaters: $15

Hire of Horse for Supt to Portland: 3

Attention paid to the Watlala Band of Tumwaters is very apparent in this section of the ledger.

For improvements on claim sold Supt Ind. Affrs. For use of the Wallalla Band of Tumwaters as a reserve: $175

Meals & horsefeed to Inds. At time of meeting for purchase of Ind. Title to lands in Willamette Valley. 483 meals to the Yamhill Luckamiukes, Marysville, Muddy & Long Tom bands @ .37 ½ e: $181.12

Expenses incurred in the distribution of goods to the bands of Inds. In the Willamette Valley as per sub vouchers from 1 to 8 incl. : $37

to Stevens for meals & lodging at Champoeg: 1.50

to Simmons for meals & lodging at Hillsboro: 2.

To toll at Lafayette Bridge: .80

To Toll Flett & self at Clackamas Bridge: .50

Ferriage of 42 Indians & 15 horses on return from distribution at Spores Ferry: 1.50

The above record is potentially significant for the census counts of the southern valley Kalapuyans near Jacob Spores Ferry (see Spores bridge on I-5 today at Eugene-Springfield). Spores later become a Special agent with oversight of the Chifin Kalapuyans on his property, which is noted as being the site of their village as well. The other tribes were at the Mohawk Valley (Pe-u Kalapuyans). The ferriage (fare) number of 42 Indians is likely the Chifin and Pe-u counted together.  With a common count of 20 per village in this area it is likely only these two bands. Compare this count with that of the first census of the tribes at Grand Ronde in October 1856 with 20 Mohawk and 23 Winefilla, which could be the Pe-u, with 43 people, a very close count to the 42 noted in March 1855

60 days commencing Jany 1 & ending March 1st assisting to distribute goods to the various bands of Inds. In Willamette Valley & assistant sec’y to the Supt @ $4 per day:

67 days services self & horse, extra allowance of self over that allowed as interpreter while engaged in collecting Indians during holding of treaties, & distributing goods commencing Jany 1 ending March 8 @ 700 per annum:

Expenses incurred while distributing goods and assigning reserve to the Indian bands which vouchers could not readily be taken at this time. 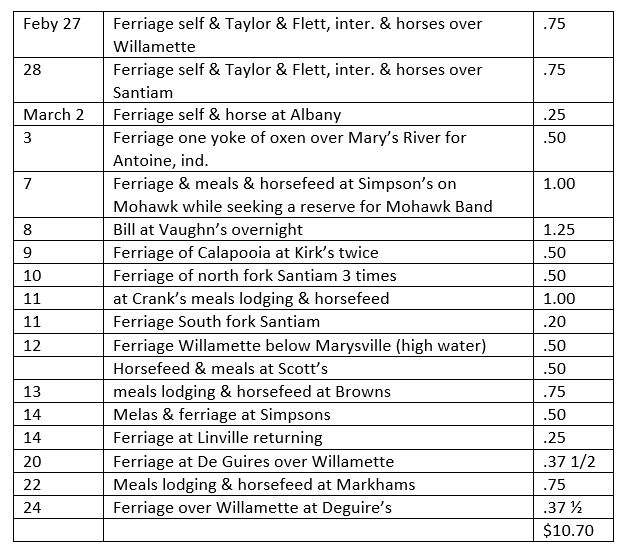 Expenses in transporting treaty goods from Dayton to Rogue River, on return, as messenger, & transportation of treaty goods to various bands in the Willamette Valley as paid- 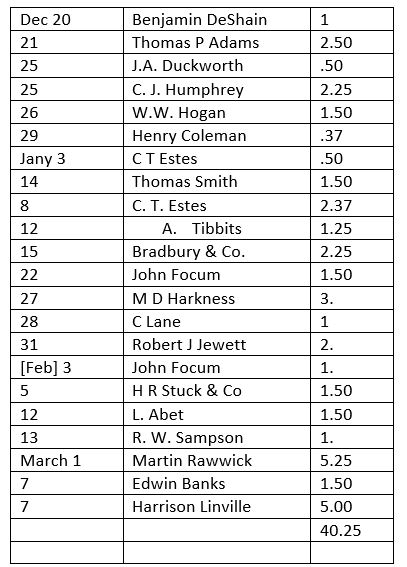 For services negotiating treaties with tribes in Willamette Valley; as messenger one month commencing the 1st & ending the 30th days of Jany 1855 at fifty dollars per month, $50

Interesting that the two tribes listed above have a separate voucher, and quite late in the process. The numbers are likely only chief and headmen. But for Joe’s band of Santiam, which is Joseph Hutchins, the record of his signing the treaty is after the treaty had been ratified by Congress, as I note in another essay. He is signing on behalf of his band of Santiam Kalapuyans and the Santiam Forks band of Molallans, which may account for the larger number of his entourage.

For use of house while negotiating with the Indians of the Willamette Valley, .50

For board of self & employees during time of holding negotiations being in the aggregate 18 weeks at 6$ per week.

For cash paid the delegations of the several bands according to agreements at the time of holding treaty of purchase between January 4th and March 12th 1855 as shown in abst. Of destination of Treaty goods mos. 1-3-4-7-8-9-16:

For items of expenditure incurred in negotiating with Ind. Tribes in the Willamette Valley for which vouchers could not conveniently be taken 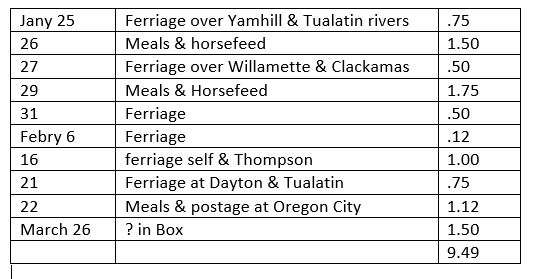 The voucher ledger adds significant context to the correspondence and treaty documents we currently have. The notations in the ledger can add to our data of the numbers of tribal people, when certain events took place, and who was involved on the part of the Indian office in each service, and records of messengers and employees not assigned as sub-Indian agents or Indian agents are normally rare. The costs involved in operating in Oregon are important because most of these costs would be charged back to the treaty annuities, before tribes received any funding or services.