The Santiam Forks Band of Molalla is not as well known as the Northern Molalla. We have had a few stories and while there is some information in families genealogies of Chief Coastno, it is a rare subject. This essay will focus on this small tribe and reveal the available information.

The most information was have about this tribe of Molalla is contained within the 1851 treaty journal;

Saturday Afternoon, 2 o’clock, the chief and principal men of the Santiam Band of the Moo-lal-le tribe of Indians, having been assembled the Board of Commissioners met them in council.

The band are of the same tribe, as the principal Band of the preceding treaty (Northern Molalla). They claim however, a distinct territory from the principal band. The Bands men assembled together, and heard the speech delivered by Col. Allen, and pointed out as their chief- Coast-nah, he being the only chief recognized by this band. The board endeavored, to unite these people, and get them to make, but, one reserve. Which was the reason of Coast-nah being in the council with the three chiefs of the other band. He heard all the arguments, and objections urged by both parties. Both Bands objected to being united and consequently wished to make separate reserves, which the board agreed to. Thinking it better not to urge or compel them to do it against their wishes.

The board agreed to permit this band to reserve, within the bounds above described, with the condition of their permitting the whites who had taken land claims, to retain the same, with all the rights the law allow them. Which was willingly consented to, on condition of no more being allowed to come in there, men, but, two whites claiming within this reserve.

The reserve is bounded as follows, towit: Commencing on the north fork of the Santiam River, immediately above the reservation made by the Santiam Band of the Callapooya tribe of Indians, as set forth in the treaty, concluded by said band with the government of the United States, at Champoeg on the 16th day of April A.D. 1851: thence, running southwardly, along the last line of said reservation, and beyond the same, along the base of the Cascade Range of Mountains to the second creek southeast, of the said North Fork: thence, up said creek, to its source: thence, east to the summit of the Cascade Mountains: thence, northwardly, along the summit of said mountains, to a point due east, of the source of said North Fork of said Santiam River: thence, west to said North Fork: thence, down said North Fork, to the place of beginning.

The board of commissioners, then, made this Chief; the following proposition, in consideration of his ceding to the United States government, the territory above described, except, the reservation last mentioned.

To give this band $20,000 to paid in twenty annual installments of $1,000 each. Two hundred of which, is to be paid in cash, and the remainder, to be expended in the purchase of 100 blankets; 40 pr. of pants, etc. (as the articles are specified in the treaty), All to be good and substantial articles, and paid as specified in the treaty: also, at the first payment, the U. States is to deliver, to said chief 10 good rifle guns, to be by him distributed among his tribe, and one good Indian house, for the exclusive use of the chief.

This proposition, was accepted, and on the 7th day of May (1851) the flowing treaty was read, and fully explained and interpreted, to this Chief, who signed it with willing and confidence.

As follows, the treaty, the original of which, has been transmitted to the Department.

The Treaty of Agreement, is available at the NARA digital documents website, https://catalog.archives.gov/id/178206162, look to pages beginning in the 40s.

Otherwise Joseph Hutchins wife Mary notes that she is the daughter of Chief Coastno in several documents. Notably the John Minto written description of a 1874 campmeeting in Salem states “Jo Hutchins, head man of the North Santiams, to take a seat inside the circle. Joe’s wife, of the chieftain line of the Molallas, and the last of that line, …”

There are few other details of Chief Coastno in early histories, he does appear with the name “Coosta” in some adventures in Oregon City.  Settlers forced tribes into ever smaller settlements and destroyed they food sources and began limiting where they could travel about their lands through fencing and plowing of their prairies.

By 1851, all of the tribal lands in the valley had several settlers claiming lands, making it increasing difficult to even claim the reservation area as we see occurring here in the treaty journal. Anson Dart, the Indian superintendent of Oregon in 1851, did not participate in the Willamette Valley Treaty Commission and took that role away from the commission by August 1851. When Dart went to Washington, D.C. to advocate for the treaties in Congress, it was discovered that increasing land claims in the valley left no space available for any of the expansive reservations chosen in the 1851 treaties. It is unclear yet whether the rate of settlement by whites caused this, or settlers heard that the tribes were going to claim reservation in prime farm lands and got busy making sure all of the land was claimed so to eliminate the possibility of reservations. Regardless, Dart sent letters to Congress and told them it would be best to table the nineteen 1851 Oregon treaties so they would never be ratified. This happened and the treaties were never ratified and the tribes never got their reservations.

The Santiam band of Molallas somewhat disappears from the public eye afterwards. The 1855 Willamette Valley Treaty for all of its history, to 2021, did not mention or include this tribe and it was assumed that the tribe simply confederated with the other Molalla tribe who was a noted signatory to the treaty. This was a common enough history for many tribes who were forced into a tightening areas for their villages, and after having gone through a dramatic population decline with malaria in 1830 and many other diseases and settler conflicts for more than 20 years afterwards. The ferocity of the American frontier, much of it caused by white Americans, tended to sandpaper away many tribes through murders, diseases, many of which go uncounted. Much reduced and vulnerable, they may then confederate with other small tribes for safety and security of become completely dispossessed and enter into roles in white American society serving the needs of colonization. 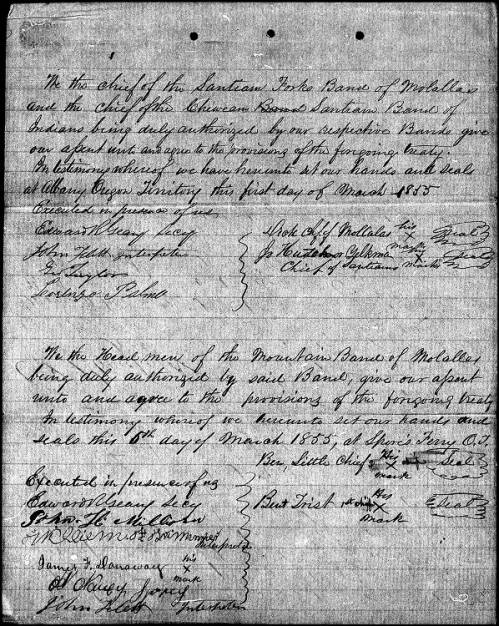 These pages are signatures from five other tribes not yet associated as signatories to the treaty previously, but assumed to have been in the treaty anyway. Some of the Band names were unknown, but one, the Santiam Forks band of Molalla appears to be the same band that received an 1851 treaty. The main signatory on behalf of the Santiam Forks Band of Molalla, is “Dick Chief of the Molallas,” While Chief Hutchins, also well known as Alquema, and a known Santiam Kalapuya man with high status for decades at the Grand Ronde Reservation, also signs on behalf of his own Chiwean Santiam Band. It appears that Chief Hutchins may have had status in both tribes and operated as a leader of both, and delayed his signing of the treaty for nearly three months, signing March 1, 1855, two days before the treaty is ratified by Congress. Since both tribes signed on March 1, 1855 there seems to be a relationship between them, which may be the marriage of Hutchins to the daughter of Coastno, It is still unclear as yet, whether the U.S. Congress was aware of the additional five tribes who signed onto the treaty late in the process, but it appears they did not know.

There is as well another set of records which reveal more about the Santiam Fork Band of Molalla, invoices from the Joel Palmer papers. Palmer’s invoice of the supplies allocated to the band is dated March 1 1855 and includes a surprise census of the tribe.

The Santiam Forks Band of Molalla had 29 people and at least one name “Sophan” is a known name on the reservation for some years. The other names, Molallan in origin, will likely disappear on the reservation as many of the people will take American names.

Another invoice notes what appears to be the census of the Chiwean Band of Santiam and the receipt of goods transcribed from Chief Jo Hutchins, labelled March 1, 1855, aligning well with the date on the treaty signature pages. I think we can assume that the signatures were collected on the day the goods were received.