In 1856, Joel Palmer had some 4000 Natives removed from their homelands to the Coast and Grand Ronde Indian Reservations. Up to at least April of 1856 the primary location of the removal of the tribes was the Grand Ronde addition to the Coast Reservation. In this early period Palmer did not conceive of the two reservations as separate and he had already created the Coast Reservation in 1855 under presidential executive order. The Grand Ronde addition was not yet thought of as permanent and yet the majority of all tribes removed first settled at Grand Ronde due to the way that Palmer managed their removals. The tribes from southern Oregon, those who came through Port Orford were placed on schooners and shipped through Oregon City, to first go the Dayton encampment where Palmer had his Indian superintendency office. They would be fed and counted and placed on the road to the Grand Ronde Reservation which was conveniently only a days journey away. Most of the early arrivals would settle, encamp on the reservation in areas appointed to their tribes on the Hazen map.

In 1857 a number of the tribes at Grand Ronde moved over to the Coast Reservation to join their brethren from the coast and southern Oregon. The move was down the Salmon River trail, about a days travel to the coast, with many settling on the coastal plain at what is now Lincoln City. Many of these people also would travel up the Siletz river to the Siletz valley to settle with their relatives there near the agency office. But many people stayed at Grand Ronde as well effectively splitting tribes like the Shastas and Takelmas between the two reservations. In 1856 tracking down which tribes went to which reservation has been difficult. There were some late year censuses taken in 1856 for Grand Ronde and the Coast, but the early part of the year was an unknown. Some years ago the Raymond census surfaced at the Oregon Historical Society Library. This small notebook contained notes from the first couple months of the Grand Ronde Reservation from William Raymond, an Indian agent and possibly additional notes by Robert Metcalf.  The extremely light pencil writing of the Raymond census made it difficult to identify for years. What I noted in this census is there were no counts for Rogue River/Table Rock tribes. The Table Rock Reservation tribes were removed in late February and marched overland for more than 30 days to arrive in Grand Ronde. The census does contain counts of the people from the Umpqua Reservation. These people were removed in late January 1856 and arrive in late February at Grand Ronde. Therefore the date of the Raymond/ Metcalf census is likely to be early March 1856, making it the first census of the Grand Ronde Indian Reservation.

Now, however, there has been identified an addition 78 census counts in the Joel Palmer Collection online (in 2 folders labelled censuses). Of these, there appears to be two pages artificially separated but now reunited, of an original census document which is called “Census List of Indians Located on the Coast Reservation and Grand Ronde Attached thereto.”

The full census is located following;

As we can see the census spans the whole of the Coast and Grand Ronde Reservations.  The counts for the Rogue Rivers, Umpquas are combined counts of numerous tribes that came from those two reservations. Similarly, there are combinations of various Kalapuya and Molallas tribes based on what encampment they had been located to by Palmer and his subordinates and whether they were removed with the other tribes. The census is not dated so its difficult to use it as an official record. However, one number in particular stands out, that for the Clowwewalla, Clackamas, and Walalla band of Tumwater, 209 (see this notation lower third of first page). This is the same number that appears in two other documents, invoices of food and supplies, as the tribes are hosted at Dayton and then removed overland to the Grand Ronde Reservation (see notation below “Clackamas etc…. total 209). 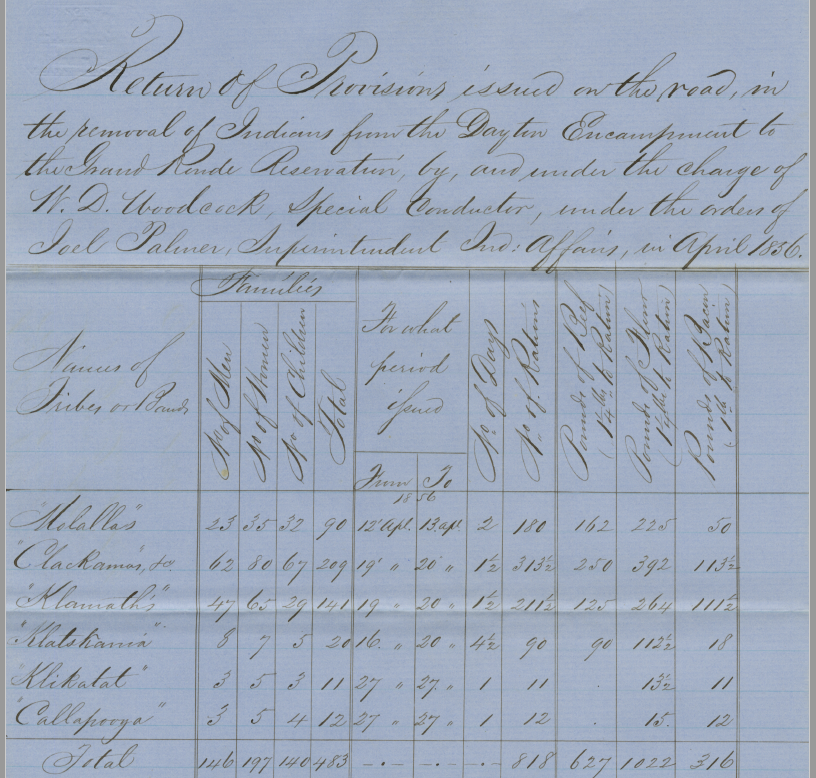 The number represented the combined total of three different tribes as they were gathered up and transported by Lot Whitcomb to Dayton on his steamboat and then moved overland to Grand Ronde. Therefore, this census occurred between April and May 1856. In the summer of 1856 numerous additional Rogue Rivers arrive from southern Oregon as they lose the Rogue River war and surrender at Port Orford. The number for the Clowwewalla etc. changes significantly by September with the addition of more tribes and people, stragglers who came late to the reservation. We can confidently attribute this census to April – May 1856 making it the first census of the Coast-Grand Ronde Reservation before they become separated,  and the second census of the Grand Ronde Reservation after that produced by Raymond and Metcalf. It may be that this was a living census and peoples were added as they arrived on the reservation

Compare the above census to the October census for Grand Ronde. 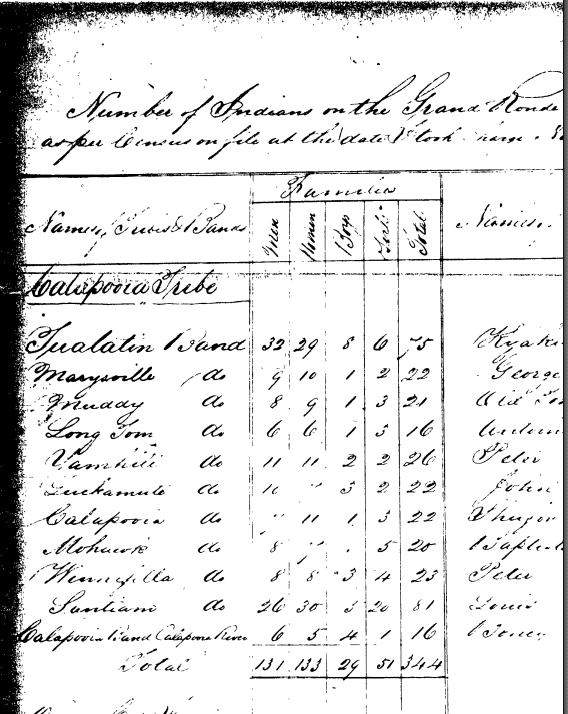 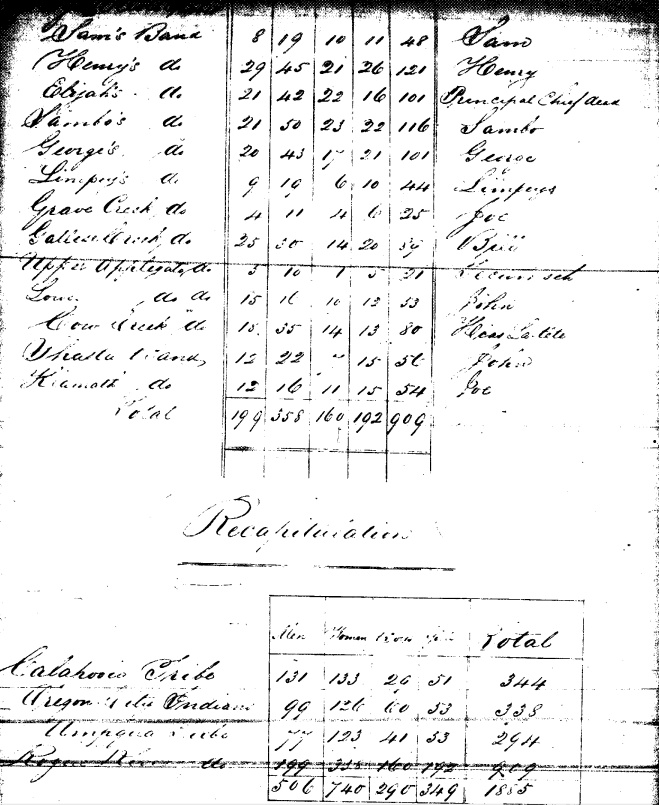 There is a later Coast Reservation census which I will add later.

In the results of this work on the early censuses, we can see a number of facts that we have suspected all along but are now verified. All of the Kalapuyans and Molallans originally went to the Grand Ronde Reservation and none went to Siletz Agency on the Coast Reservation. All of the signatory tribal governments from the Willamette Valley Treaty are placed at Grand Ronde and none are located to the Coast Reservation. The Coast Reservation solely got peoples from the southern Coast and tribes from the Rogue River (1853) and Chasta (1854) treaties, which they split with Grand Ronde (about 2/3rd went in 1857 to Siletz Agency from Rogue, Chasta, and Shasta tribes to join the people already settled on the coast). The coastal peoples that are party to the Coast treaty (1855 unratified) mostly go to the Coast Reservation, except all of the Tillamookans who remove later. The Tillamook story of removal is quite complex so read about it in my other essays.  This is the initial configuration of removal and this aligns perfectly with elder accounts. In later years its quite clear there were a number of inter-tribal marriages and people from both reservations intermixed and moved around. But the initial treaty claims would be based on this initial configuration of where the tribal governments were removed to and where the vast majority if not all of the people were removed to.

This leaves unanswered political questions of why and how the present Siletz Tribe can claim the Willamette Valley Treaty (1855) at all, as well as the Cow Creek (1853) Umpqua and Kalapuya (1854), the Molalla (1855) treaties, as their treaties. The Siletz Tribe certainly has good claims to the three Rogue River and Chasta treaties. Other essays I have written show direct evidence that all of the peoples from the Table Rock, Umpqua, and Cow Creek reservations went to Grand Ronde, and none of these people went to the Coast Reservation. The evidence of all of this in in the federal records, now readily available for all to read.