Tribes generally rename President’s day to Tribal Chief’s Day. Chiefs, headmen and leaders of the tribes have significant responsibilities to make decisions for the welfare of their tribes. In the past the Chiefs were the ultimate authority and their leadership was unquestioned. Here are some of those tribal chiefs in short biographies. 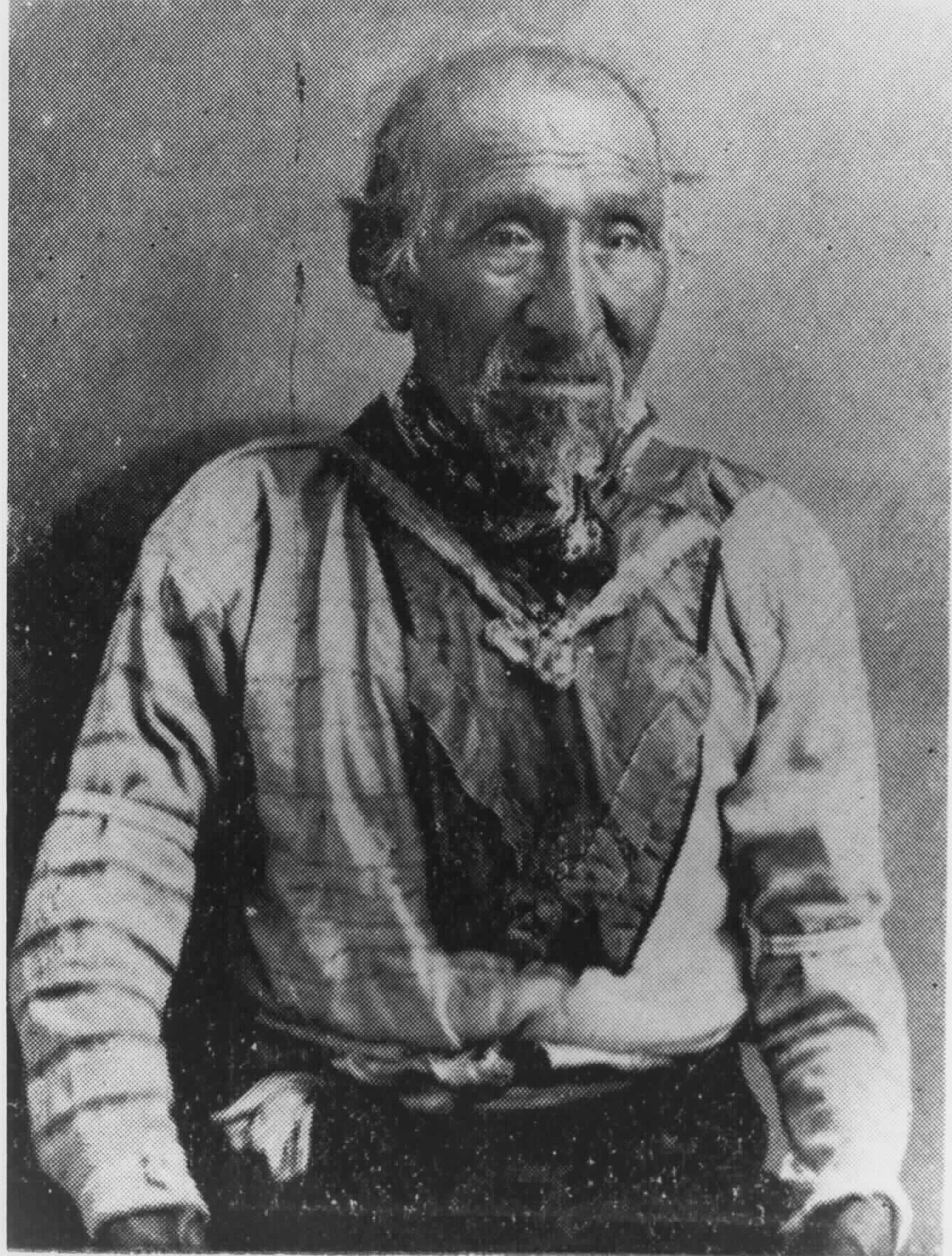 He and his people formed part of a confederation of tribes that fought against the American miners, settlers, and militia from 1853 to 1856. Oregon Indian Superintendent Joel Palmer noted that Chief John and his confederation of tribes, namely George’s, Limpey’s, Sam’s and Tipsey’s bands, collectively held controlling influence over a broad cross section of tribes in the region, principally the Shasta, Chasta Costa, Dakubetede, and Takelma tribes.[5]

The full essay about this great tribal Chief is at the Oregon Encyclopedia, Tecumtum.

Chief Kiesno (his name has also been spelled Keasno, Casino, Kiyasnu, Q’iesnu, Ciasno, Cassino, and Cassinov) was an important Multnomah-Wakanasisi Chinookan leader in the Wapato Valley (Portland Basin). Throughout the fur trade era (1810-1840’s), he had the respect of the Hudson’s Bay Company, the Pacific Fur Company, and the North West Company. Well connected through intertribal marriage to other groups on the Columbia and Willamette Rivers, he was the highest profile leader west of the Cascades from 1830, when Chief Concomly (Chinook) died, until his death in 1848.

The Wapato Valley people occupied a large area at the confluence of the Columbia and Willamette Rivers, including the Multnomah and other villages on Wapato Island (today’s Sauvie Island) and Cathlapotle and its neighbors in present-day Clark County, Washington. Kiesno’s principal village was Gatlakmap (Cathlacumup, Wacomapp) in the vicinity of present-day St. Helens. He also had direct influence over Nayaguguwikh (Niakowkow, Nayakaukauwi) at the mouth of Multnomah Channel and Wakanasisi on the north bank of the Columbia, downriver from Fort Vancouver.

Kiesno maintained political influence over the Wapato (Chinook) people and had ties with neighboring groups—including the Clackamas Chinook near Willamette Falls, the Cascades Chinook at Cascade Rapids, and the Tualatin Kalapuya in the Willamette Valley—taking advantage of those connections when needed. In August 1813, for example, the Cathlacumups and “70 warriors from some of the neighboring tribes” fended off an attack by seven canoes of Clatsop-Nehalem. In April 1814, when an incursion of forty canoes of Cowlitz and their allies entered the Columbia River, Kiesno called for aid from “Indians at the Falls of the Willamette, [and] the Calleporeyours,” and the defense of the Wappato Chinook territory was successful.

Kiesno was known served as a good host and business associate to help the fur traders, explorers, and settlers on their arrival in the Oregon Territory. It is theorized (by me) that he is the model of the character of Chief Multnomah in Balch’s book, “Bridge of the Gods” (1897). An example of his largess is written into Robert Shortess’ account of his travel to the Oregon territory, “with the assistance of Keasena, an Indian chief at Vancouver, crossed to the south side and remained in camp from Saturday till Monday, feasting on sturgeon and wapatoes.” (First Emigrants to Oregon, Transactions… Oregon Pioneer Assoc. 1896: 103)

The rest of this essay is on the Oregon Encyclopedia, Chief Kiesno.

These Chiefs of the Santiam Kalapuya tribe, were instrumental in negotiating with the federal government over the sale of their lands through at least two treaty periods, 1851 and 1855. They were one of the first tribes to refuse to remove from their homelands, sought to remain on a small reservation between the forks of the Santiam River and were powerful enough, that all of the other Willamette Valley Kalapuya tribes joined with them at the negotiations and chose to look to them for guidance. The Santiams were at this time the most powerful of the Kalapuya tribes because of their strength of character. They negotiated a week with the Federal agents before agreeing to sell their lands in 1851, then forced the agent, Anson Dart, to accept a small reservation within their homelands. The treaties failed because of this provision. In 1855 the chiefs agreed to remove to Yamhill Valley, and Joseph Hutchins becomes a chief and leader at the confederated tribe for several decades later. His children took the name Hudson.

Tiacan said, “they were friendly to the whites and had always been and that they were willing to do as their Great Father (President of the USA) wished and part with all of their lands, except a small portion, that they wished to reserve to live upon, feed their horses and cattle and cultivate.”

The Board asked if they would be willing to remove beyond the Cascade Mountains provided our Government would give them as good a piece of land there and pay all of their expenses in the removal. They all answered decidedly “No.”

Alquema said “they had once been a great people but now they had decreased to nothing, and in a short time the whites would have all their lands, without their removing.”

(after a night of Consideration)

The Tribe appeared willing to make a Treaty, selling all their lands, except that between the forks of the Santiam, which they wished to reserve. Governor John P. Gaines (Oregon Territory) asked if a reserve could be made there without taking the claims occupied by white Settlers. It was said it could not be done.Gaines [stressed again removing beyond the Cascades for the good of the tribe]

Alquema objected to removing, said that “They could now see that they had thrown away their country; but that they wanted to keep this piece of land as their reserve.”

Tiacan, “their hearts were upon that piece of land, and they didn’t wish to leave it.”

[another night of consideration]

The Hanshoke [Ahantchuyuk] people, decided to unite with the main tribe… and acknowledge the chiefs as their chiefs…

Alquema, “they had thought over it and they had determined to reserve the country between the forks of the Santiam and that all the Indians would go together into this reserve.”

Alquema, “We don’t want any other piece of land as a reserve than that in the forks of the Santiam River. We do not wish to remove.”

This Treaty was never ratified, but the story and transcription tells us much of the character of these people. Later the Kalapuya tribes were on the Grand Ronde Indian Reservation and addressed other proposals without much trust for the Federal government.

In 1869 Jo Hutchins, Chief of Santiams- said, “I am watching your eye. I am Watching your tongue. I am thinking all the time. Perhaps you are making fools of us. We don’t want to be made fools. I have heard tyees talk like you do now. They go back home and send u something the white man don’t want. We are not dogs. We have hearts. We may be blind. We do not see the things the treaty promised. Maybe they got lost on the way. The President is a long way off. He can’t hear us. Our words get lost in the wind before they get there. Maybe his ear is small. Maybe your ears are small. They look big. Our ears are large. We hear everything. Some things we don’t like. We have been a long time in the mud. Sometimes we sink down. Some white men help us up. Sometimes we sink down. Some white men help us up. Some white men stand on our heads. We want a school-house built on the ground of the Santiam people. Then our children can have some sense. We want an Indian to work in the blacksmith shop. We don’t like half-breeds. They are not Injuns. They are not white men. Their hearts are divided. We want some harness. We want some ploughs. We want a sawmill. What is a mill good for that has no dam? That old mill is not good; It won’t saw boards. We want a church. Some of these people are Catholics. Some of them are like Mr. Parish, a Methodist. Some got no religion. Maybe we don’t need religion. Some people think Indians got no sense. We don’t want any blankets. We have a heap of blankets. Some of them have been like sail-cloth muslin. The old people have got no sense; they want blankets. The treaty said we, every man, have his land. He have a paper for his land. We don’t see the paper. We see the land. We want it divided. When we have land all in one place, some Injun put his horses in the field; another Injun turn them out. Then they go to law. One man says another got the best ground. They go to law about that. We want the land marked out. Every man builds his own house. We want some apples. Mark out the land, then we plant some trees, by-and-by we have some apples.”

“Maybe you don’t like my talk. I talk straight. I am not a coward. I am chief of the Santiams. You hear me now. We see your eyes; look straight. Maybe you are a good man. We will find out. Sochala-Tyee, God sees you. He sees us. All these people hear me talk. Some of them are scared. I am not afraid. Alta-kup-et, I am done.” – (Wigwam and Warpath, Meacham).

Chief Henry Yelkus (Yelkas) was a Chief of the Molalla tribes at Dickie Prairie, outside of Molalla. Yelkus was a young leader at the time of the treaties and took over as Chief after Chief Coast-no died. Yelkus led the people to the Grand Ronde Indian Reservation in 1856 under orders from General Joel Palmer, Indian Superintendent of Oregon. Palmer wanted to save the tribe from further problems with the settlers in Oregon. Yelkus stayed at GRIR for about five years then returned to Dickie Prairie with many of his people after Palmer’s promises failed to come true. They remained in the area for several years until many of the Molalla went to live in Oregon City to find work.

Yelkus served as a representative of the tribe at Molalla events and attended the commemoration of the first train to reach Molalla in full regalia, September 20, 1913.  He was murdered that evening through unknown circumstances on the road back to his house.

These are several chiefs of the Western Oregon tribes. All tribes have past and present chiefs, headmen and leaders. These people deserved to by honored for all they did for the people.

For a longer list of the chiefs from this era and region see my previous essay.