Over the years, I have worked deliberately on the tribal histories of many tribes in Oregon. During this time, I have produced over 130 histories of the tribes, free to the public. Some of these are being now rewritten and turned into history books suitable for publication.

This Campaign “Heroes of the Tribes of Oregon” is about getting the tribal histories out to where they will matter. In all regions of Oregon students are not learning about the tribes of Oregon. There are few curriculum sources available and few other sources that they can base the students’ studies on. I am producing many stories that I hope help teachers and students. I know there is great interest out there.

All of this research and writing takes time. I spend upwards of  6 hours a day in research and writing. I currently have no support for this work. As a Native Scholar with a PhD in anthropology, I am uniquely positioned to take advantage of my experiences and interest in Tribal history and culture and write these histories. Many of the histories never made it into any history book anywhere, or have never been effectively researched before. They constitute a huge body of invisible history that is a huge part of our collective history in Oregon. These histories, are not always positive, but they reveal what really occurred for the people in many tribes, and how they interacted with the contested settlement of their lands and interacted with the pioneers who settled here.

How You Can Help

To help fund my research and writing, I am releasing a series of Native heritage t-shirts that derive from the history of Oregon’s Native people. By purchasing these shirts I will be able to continue my work to research and write tribal history that will benefit all of is in the future. Please help me get to my goal of 102 shirts in 19 days on this first offering. Thank you for supporting me, and here is the amazing story of Tecumtum the subject of my first shirt. (If you have suggestions of who else I should feature, Please let me know) 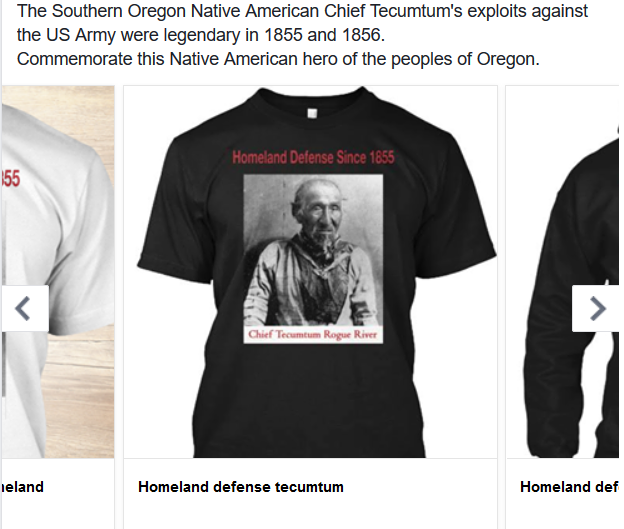 Please click on this link to access where you can buy the shirt and support my work.

The Last to Surrender: Tecumtum

He and his people formed part of a confederation of tribes that fought against the American miners, settlers, and militia from 1853 to 1856. Oregon Indian Superintendent Joel Palmer noted that Chief John and his confederation of tribes, namely George’s, Limpey’s, Sam’s and Tipsey’s bands, collectively held controlling influence over a broad cross section of tribes in the region, principally the Shasta, Chasta Costa, Dakubetede, and Takelma tribes.[5]

After Tecumtum surrendered in summer of 1856, he was removed to the coast reservation. he was later taken to prison at the Presidio in San Francisco for continuing to foment violence at the reservation, and working to get the people to return to their homelands. When he was released some years later he lives in Grand Ronde with his daughter. There he is revered as  Chief John for the remainder of his days.

The full essay about this great tribal Chief is at the Oregon Encyclopedia, Tecumtum. 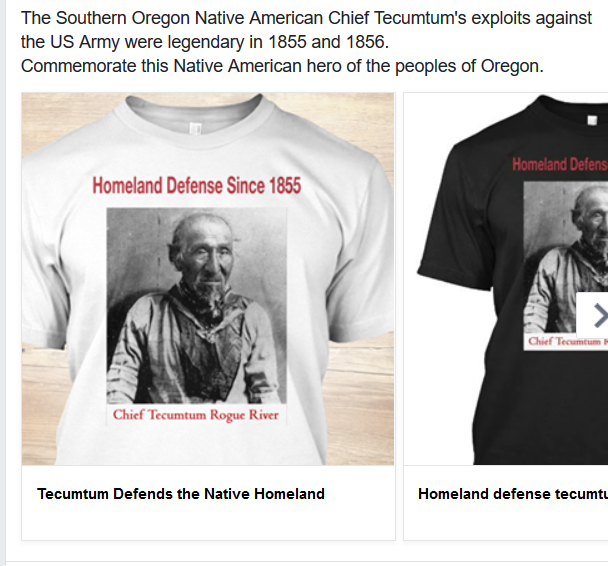 Please click on this link to access where you can buy the shirt and support my work.