When the Tribes Sold Everything: Oregon Tribal Treaty Payments

In the 1850s and 1860s the Tribes of Oregon were treated with by the federal government, they signed at least 16 treaties, and Congress ratified them. The Tribes were paid for their lands in a system of annual payments.  The federal government bought the majority of Oregon for less than 1.5 million. Afterwards, the tribes were removed to reservations and most remained on the reservations for the next 100 years. The treaty funds, or annuities, paid for most services at the reservations, building schools, providing food, and hiring laborers and professional service providers. Most of the treaty annuities ended in the 1870s, and most of the Native people remained on the five permanent  reservations (Warm Springs, Umatilla, Klamath, Grand Ronde, Siletz). Two reservations were terminated, Malheur and Nez  Perce. Today there are nine reservations, and most Tribal members no longer live on their reservations. 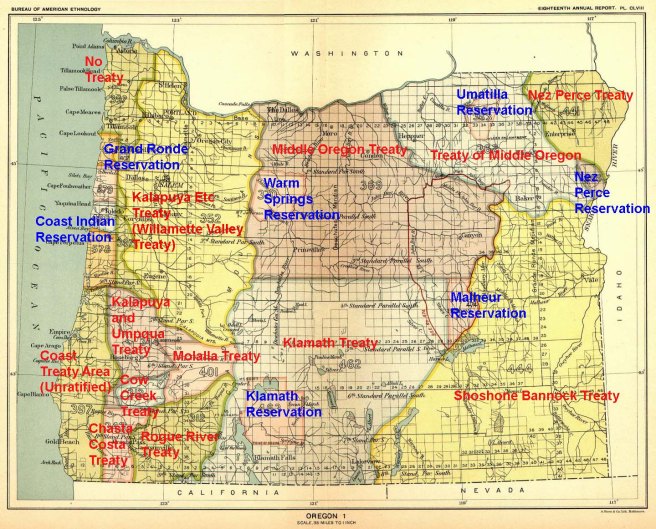 It is truly startling to see the little amounts paid to the tribes for their homelands.

The annuity funds noted are those amounts innumerated in the treaties for various purposes. The Eastern Oregon Stevens treaties included much more details, including the amounts to be paid to the chiefs and head men and the costs of building the reservation institutions. The Palmer treaties of Western Oregon do not detail such payments in most of the treaties.  The western Oregon treaties rarely stated what it would cost for mills and other structures and simply promised that they would be built.

In addition, several of the treaties did not transfer the ownership of lands. These agreements and treaties generally were meant to keep the peace or modify the original treaties.

Most of the payments stated were not to be paid in cash to the tribes. Instead this was money that was to be managed by the Indian Agents to annually purchase food and supplies and build and maintain the reservations. They paid to maintain the buildings and purchase contracted services from local traders, teachers, doctors and farmers. There has yet to be a project to innumerate the value of the houses built, services contracted, or supplies transferred to the tribes.

The funds promised as annuity payments had to be requested by the regional Indian superintendents in their annual budgets.  Once they requested their budgets of the Commissioner of Indian Affairs, the commissioner had to champion their budgets before the United States Congress. Each year Congress had to vote to appropriate the annuities for the tribes for the amounts already promised under treaties. In many cases, budgets were radically slashed and there was not money to repair necessary structures, no money for upgrades, not much for continuation of professional services beyond 1875, in many cases.

There are several times when the tribes were probably malnourished by the government. In the 1860s, the tribes were told they had to grow or gather they own food, but they were not allowed to have guns, nor were farming supplies or seed given them. On numerous occasions Indian Agents make requests to the Commissioner of Indian Affairs to allow the butchering of old animals to feed hungry Indians.

Coast Reservation, neahkahnievisions (Fort Umpqua is not located in the correct location on this map)

The Coast Indian Reservation was in a peculiar quandary since its inception. Of the tribes removed to the CIR, many did not have treaties which would support building the reservation. The coastal tribes did not get a ratified treaty and so their annual appropriation was completed under the good will of Congress. This is likely why the agents at the Siletz agency could not effectively administer the Tillamook tribes until 1886, as there was no money for building roads or services for them. So the Indian agents at Grand Ronde instead were assigned to manage the Tillamook tribes. In addition, in 1875 the federal government closed the Alsea reservation and the tribes there were told to go to the Siletz Agency. To get the tribes at Alsea to agree to remove, the agent promised them houses. These tribes were instead taken to salmon river and no houses were ever built for them. The agent at Siletz Agency did not have the money to build houses as they only had 10,000 to manage all the tribes for the whole year. It appears that the treaty funds of many of the tribes that were at Siletz Agency were going to the Grand Ronde Reservation. It is unclear exactly why, but the theory is that when the federal government split up the tribes in 1857, they decided to leave the “treaty-abiding” peaceful Indians at Grand Ronde and send the warlike “treaty-breaking” Indians to Siletz. This may be why there was less money at Siletz Agency for the expenses of the 25+ tribes of the coast and southern Oregon.

The Nez Perces treaties are exceptional in that they tell the story of how the tribe was invaded and began losing lands and horses to the American Invaders. Their treaty of 1863 is the only one to offer depredations claims to the tribe for the theft of their horses. They are also the most shrewd of negotiators because fully one third of all money paid to Oregon tribes went to the Nez PerceTribe.  And then, some years later they lost all their lands in the Nez Perce War, which is misnamed, as it was really the actions of the renegade Americans that caused the war in the beginning.

The orders given Palmer was that he must purchase the land at the lowest price possible and to try to get the tribes to accept goods and services instead. When tribes were offered education, they readily agreed, and when offered blankets and houses for the chiefs, they agreed to this too. It is possible that the houses for the chiefs were a pay off to have them sign the treaties. Regardless, when we work the numbers a bit and get the estimated acreage for the lands transferred to the United States by treaty, its truly startling how cheap the land was sold for.

Of all the western Oregon treaties, the Southern Molalla got the worst deal, being paid  about one third of a cent  (.0037 cents) for each acre in their over 3 million acres. The Chasta Costa got the best deal getting almost 6 cents an acre for their over 7 hundred thousand acres. Collectively,  the tribes in the Umpqua valley and neighboring mountains, the  Kalapuya, Cow Creek Umpqua and Molalla,  received .008 cents per acre for their 8,391,386 acres of land.   For all of western Oregon, over 19 million acres, the area covered by treaties, which excluded the coastline, the tribes collectively were paid 2 cents an acre. This has got to be one of the best land deals the Americans ever made. In 1853, that same land was being sold at the Federal Land Office in Oregon City to American settlers for $1.25 an acre, a truly amazing profit margin.

Joel Palmer was the Indian agent that negotiated all of these treaties from 1853 to 1855.  His was the most successful treaty making project as seven of his nine treaties were ratified. His predecessor Anson Dart, had negotiated 18 treaties in 1851, none of which were ratified. Dart was ordered to offer a maximum of 10 cents an acre. He ended up settling with most tribes for 3 cents an acre. Palmer’s results appear very stingy compared to Dart’s.

These totals are startling, and tell a story of how Oregon was bought for less than 1.5 million dollars. There has yet to be a project to audit the treaty payments to understand how tribes were paid, whether they were paid correctly, according to the treaties.

all treaty amounts gathered from this site

Thanks for Volker Mell for the Treaty area acre estimates. Based on the Grand Ronde Tribe’s treaty map database.