Guilford W. Warden  was an emigre into the Oregon Territory in 1850. He had a donation land claim in Yamhill County near the South Yamhill River and Salt Creek. It was claim number 1822, was 638.89 acres, and was located in the GLO map grid of Township 6, Range 5.  This land claim was surveyed in 1858 and has associated journal recordings of the DLC. He married Lydia Ann Goodrich of Polk County in 1851. Joel Palmer, the Indian superintendent for Oregon, appears to have established a temporary Indian reservation on the Warden DLC in 1855.

Contemporaneous with the temporary Kalapuya reservations in the Willamette Valley, Warden had a small Indian reservation on his property in 1855. Palmer appears to have asked him to look after the Kalapuya tribes in the Amity area, and they were likely Yamhill or Yamel Kalapuya Indians. There may have been a Kalapuya village at or near this location along the South Yamhill River. 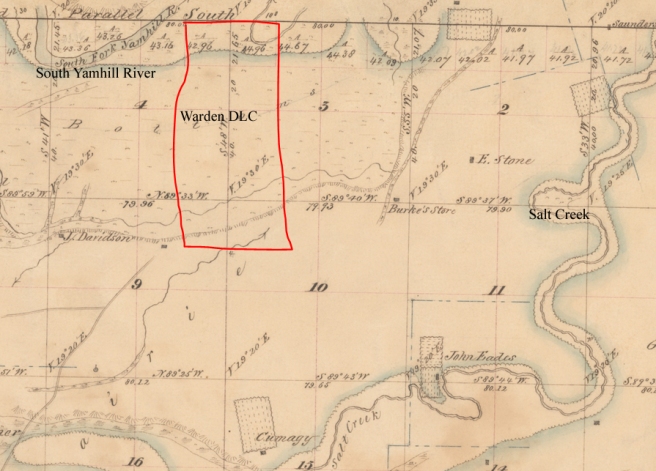 The tribes seemed to be troublesome, so Warden wrote to Palmer to complain about their habits. He did not appreciate that they claimed ownership of the land and were impudent.

“South Yamhill April 23rd 1855, Mr. Joel Palmer- Sir, As I had an opportunity to send you a line and let you know how we are getting along with the Indians which you left on my claim, I thought I would do so. They are not doing anything except to cut wood on other men’s claims, and also to make rails and try to sell them off my claim, instead of making a field of them as agreed. They are far more impudent now than ever before, calling the land their own and saying they will do with it as they like. What is best to do with them I do not know. If you could devise some means to put a stop to this way of proceeding before you leave, I would be much pleased. Yours with respect. GW Warden P.S. Please let me know soon what is best to be done G.W.W.”

According to Warden, Palmer intentionally left a tribe at the Warden property and there appears to have been an agreement for them to help with the agricultural needs of Warden. The tribe also appears to have been more cooperative previously than at the date Warden is writing his letter.

Previously, I have written about the temporary reservations in the Willamette Valley. Palmer established a network of farmers in western Oregon where he would temporarily leave the Kalapuya, Molalla, and Chinookan tribes until they would be moved to the permanent reservation at Grand Ronde. This was at least a ten-month habitation by the tribes, from March 1855 to January 1856. Many of the tribes appear to have remained at their original village sites in this period which suggests the same for the Warden DLC.

The tribes rightfully thought of the land as their own, as they had previously occupied this land for as long as 10,000 years in this valley. The Oregon Donation Landclaim Act was passed in 1850 by Congress, and so Americans began claiming all of the Oregon lands indiscriminate of the previous occupation by the tribes. They had been claiming lands as early as 1829 but this new act re-certified their claims and offered a legal process of claiming lands in Oregon for Americans. Its likely many of the settlers did not understand land laws of the United States, but that 1850 act essentially granted ownership of tribal lands to Americans, while the titles to the lands were still owned by the original occupant tribes, even under US land laws. The tribes in this case rightly claimed their ownership.

The Willamette Valley tribes, Kalapuya, Molalla and Chinookans, all signed away their ownership of their lands in the treaty of January 22nd, 1855. The treaty was ratified on March 3rd, 1855, so by April (the date of this letter), the United States legally owned the land. Still, the tribes had a significant cultural claim to the land and they had yet to be paid anything for their lands.

The first census of the reservation in October 1856 suggests there were 26 Yamhill Kalapuya removed to the reservation. The Yamhill on the table below may be those that were temporarily placed on the Warden DLC under their chief Peter.

Payments would continue for some 15 years in a series of annuities, and for 20 years, until 1875 with educational services, and in perpetuity in the form of their reservation lands according to the treaty. This promise of perpetuity only lasts until 1954 when the reservation was terminated by Congress.

Recently, I have determined that the first five to ten years the lives of the Native peoples on the Grand Ronde Reservation were filled with poverty, starvation, illnesses, and neglect on the part of the Federal government and its agents. With this new understanding, it is yet to be determined whether the United States lived up to the terms of the treaty, or essentially broke the treaty, because of how the tribes were treated.