Documents have been uncovered that address the Kalapuya mounds in the Tualatin and Yamhill valleys. The most famous Kalapuya mounds are those that were along the Calapooia river and tributaries from Corvallis to Sweet Home. In this area over 100 mounds existed. Most of these mounds have been plowed under, so that there may be less than ten mounds remaining. There is one other area that had mounds, the Longtom River had recorded mounds, but research records have yet to be discovered. 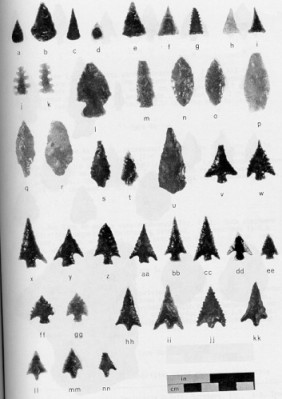 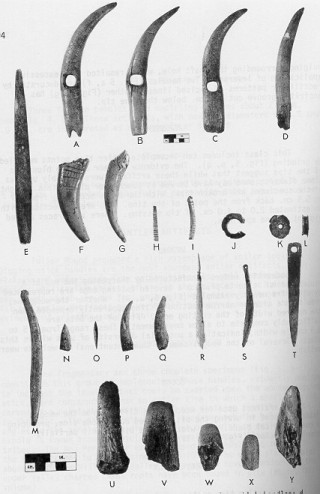 The mounds, which Albert Gatschet called Atudship mounds, were burial mounds of Kalapuyans. The area mounds appear to have been quite large and were created alongside the rivers where river soils were likely used to cover the burial mound. Many of the mounds were heavily looted in the early 20th century, by early archaeologists like James Horner of OSU. Gatschet does not appear to have assisted with looting and simply notes that the mounds were still being practiced at the Grand Ronde reservation in the 1870s.

In 1878, Gatschet states “some mounds…are still seen on a high hill north of the agency buildings. On this mountain top they awaited the rise of the sun after having exerted themselves during the night in carrying up-hill heavy rocks…other hillocks are thrown up on the hush of night by the female portion  of this Indian community, who seem more interested than the males in keeping up this antique custom… on a flat-topped eminence about one mile east from the seat of the Grand Ronde Agency.”

The mountain, likely Spirit Mountain, is the subject of this story, while the flat-topped eminence has yet to be found. The continuation of this culture into the reservation is news to many at the reservation. The culture was likely suppressed by the Indian Agents and the tribes took up burial in cemeteries thereafter. The Grand Ronde Cemetery was begun about 1900 as a community project (see the cemetery journal at OHS).

Of the Tualatin, Gatschet states  “six miles west of Forest Grove on the eastern slope of a wooded hill which slants towards McCloud’s farm...” 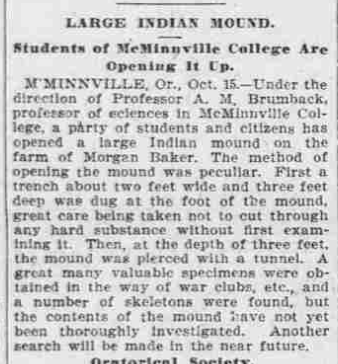 This description join that of McMinnville (Linfield) College professor Brumbach who at the turn of the 20th century was excavating mounds in the Tualatin area. Brumbach initiated excavations on at least one mounds uncovering numerous artifacts and skeletons of Kalapuyans. It appears much of the artifacts were sent to the Smithsonian Institution but they are as yet undiscovered in the collections.

Linfield has been asked if they have such collections, but they appear to not have kept the collections. The collections many have gone with Brumbach when he left for a Chemistry appointments at Dennison University or University of California, or they are at the Museum of Oregon Anthropology in Eugene. 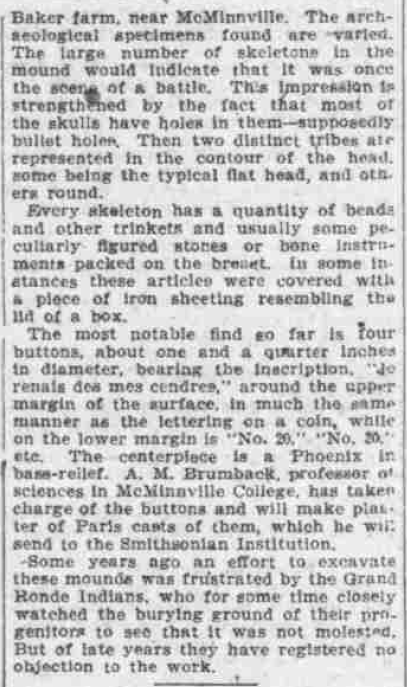 Apparently the tribes tried to protect their burials but in time gave in to continuous pressures. The tribes likely stopped practicing the traditions and the new generations stopped protecting the mounds. Found in the mounds are many items from the colonization period  (copper, coins, buttons) indicating that mound building was practiced up to the 1850s. Some scholars have suggested it was a previous culture, but it appears to be the work of the present living culture of the 19th century. 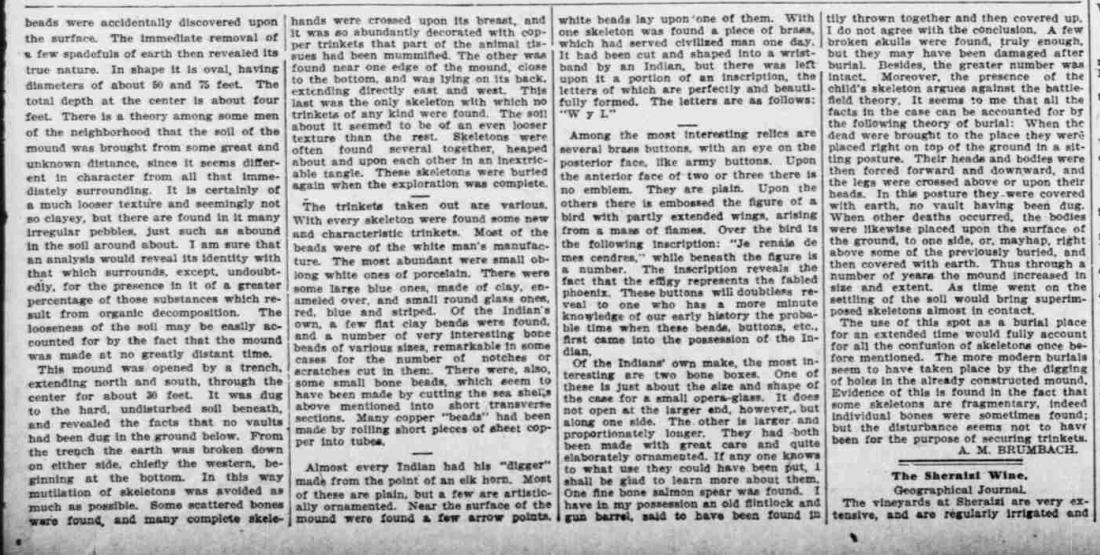 Ideally it would be best to find the artifacts and human remains mentioned by Brumbach to determine what they are by the archaeologists at the Grand Ronde tribe. Thus far, there has been no Brumbach archive or collection discovered.

Update 2022, a few years earlier, an instructor at Linfield University saw this article and investigated the collections still at the University. The Brumbach collection yet remains at Linfield and is now beginning to be studied.

Another project was undertaken by Dr. W. T. Edmundson, a medical doctor, of Newberg in the 1940’s, with the help of several others including the author of the report, William S. Laughlin (Laughlin 1943). Edmundson was interested in the mounds of the Yamhill River and excavated several. The two sites he excavated were between the towns of Sheridan and Whiteson, the Fuller and Fanning mounds (named after the farmer’s lands). Both mounds had numerous burials and contained pre-historic and historic assemblages.  The normal objects were found in the mounds, digging stick handles, dentallium, broken bowls, and but also was found one large ceremonial obsidian blade, a whalebone salmon club, and many pieces of copper. One glass bead was also found on the most recent burials. These historic objects suggest that the mound burying practices continued well into the 19th century on the Yamhill River. In addition, if the skeletal remains could be found in a collection, they may reveal clues as to what the nutrition of the people was like, and whether they died of one of the introduced diseases. While I am not an advocate for studying native human remains, these remains could reveal in another way the effects of American colonization in the Willamette Valley in physical evidence from the remains of these Kalapuyans. Limited testing, with the approval of the tribe, could be helpful in recovering the historic trauma our ancestors when through when facing invasion by the Americans.

A bit more research, revealed that there was a more contemporary analysis done of the human remains from the Fuller and Fanning Mounds. The skeletal remains are, or were, at the Oregon States Museum of Anthropology at UO, Eugene. I have not determined whether these remains were repatriated yet. David Stepp, at OSU completed his thesis analysis in 1994. He determines that there was no specific pathology exhibited in the remains. He did not however look to other indicators of pathology for the individuals who’s estimated ages were from 0-49. One clear sign of malaria (based on Boyd’s 1999 thesis that this is the main cause of the Kalapuya decline) may be in the inordinate number of younger people that died in the early 19th century. This evidence may show in a younger than normal mean estimated death. Stepp found the mean to be 20 yrs, and admits that there were not a lot of other comparison populations for Oregon. His one comparison comes from Vancouver Island, where the mean death was about 23. This does not raise any interest from Stepp as significant. As well it is unclear from Stepp’s analysis whether he controlled for the age of the remains. There was a clear window for malaria in Oregon among the Chinookans and Kalapuyan tribes, 1829- 1850, with the major effects 1830-1836. Tribes in other regions, like the Oregon coast, had other diseases, namely smallpox and venereal diseases for populations near early settler ports. This difference is likely caused by the different populations of newcomers that the coastal peoples were exposed to, and the very harsh environment where the malaria-carrying mosquitoes cannot breed.

The mean age  (20 vs 23) seems very statistically significant. If Kalapuyans were dying at a younger age in the 19th century from malaria, or from the overwhelming effects of colonization, where tribal human life was not valued and instead seem as a negative to American settlement.  Then, if so, the younger mean age of death suggests that Kalapuyans were dying fast and younger than normal, a direct effect of colonization by a competitor population.

Stepp’s analysis does reveal something interesting about the dental record of the Kalapuyans. They seemed to have a higher rate of caries than Chinookans. Stepp suggests that this indicates a more vegetable diet. This finding aligns well with ethnographic evidence of the Kalapuyans that suggest that they based their annual lifeways on the vegetable cycles of the food plants they utilized. From their calendar (Gatschet 1877) to oral histories of camas, wapato, hazelnut, and acorn gathering and processing, the Kalapuyans may have lived more on vegetables than meats. This is exactly the conclusion that Stepp proposed “The demonstrated pattern of dental attrition and caries may indicate heavier reliance on these
plants than on animal food sources” (95). In fact, the process of cooking the camas, over several days, chemically changes the proteins to be more sugary, and so their reliance on sweet camas may account for the caries of the Kalapuyans.

Loughlin, William S., Notes on the Archaeology of the Yamhill River, American Antiquity, v.9, no.2, 1943.