Some recent census research revealed a census I had not yet analyzed. Luckily, a brief search of my records found that I had previously collected the census, enabling some efficient analysis.

I was looking initially at a “1960” Census of Calapooia and Umpqua Indians on the Grand Ronde reservation.

It still unclear what this 1960 census is yet. I think it is a Indian Claims roll for descendants of these two tribes who may be eligible for payments. The Grand Ronde tribe was terminated in 1954-1956 and so in 1960 all members were terminated Indians, but there was at least one payout from one of the Indian Claims lawsuits in about 1959 or so.  Cursory searches for a 1960 decision of Indian Claims and payment has not revealed any payments for this year. I will have to consult a Law database to find more direct Indian claims decisions. There may also be evidence in Congressional bills of this period, which would have to be passed appropriate the funds to pay the Indian claims. But one bit of evidence caught my eye.

This individual was a descendant of Chief Halo, a Yoncalla Kalapuya, who is on a “1855 Umpqua Reserve Census.” My search revealed the census.

This census appears to be one of the earliest censuses on a reservation for Oregon. The Census was taken on November 15th, 1855. The section above, page 1, with the Klamath Band appears to not be fully Klamath Indians, but in part Molalla Indians. Steencoggy for one was the Head chief of the Southern Molalla Tribe, as shown in his signature on the December 21,1859 Molalla Treaty, below. 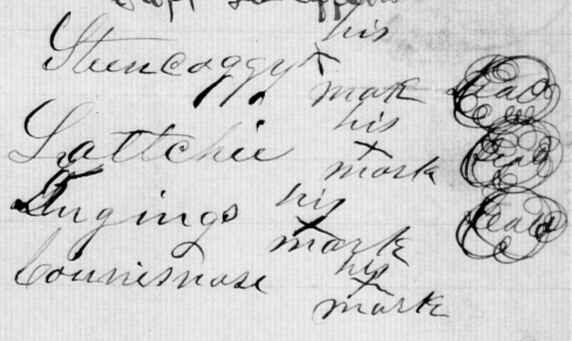 They are nearly all on the reserve that belongs to this district all with the exception of some three or five men and eight or ten squaws which the Indians report to have been run off in the various attacks made upon them in this valley. Those on the reserve are comfortable [fisced?) as they have constructed huts after their own mode of building which affords ample protection from the inclemencies of the weather, though there is causes of complaint. There has been much sickness with them mostly the flus with two children have died, together with the desertions of one Umpqua and one Klamath reducing their numbers four. (Macgruder 11/24/1855)

The conditions were quite harsh and many Indians would escape from reservations. However while they are said to “escape,” there is really no legal standing for why they had to be on a reservation or for the United States government keeping them there.

...have collected as many of the Umpquas as I can get. The number of which is two hundred and eighteen of all sizes and thirty five Molallas or Klamaths… (Macgruder 11/7/1855)

The names of all adult males and boys over twelve years of age have been enrolled/ Special sub Agent Macgruder calls the roll daily and issued to them rations of beef and flour… There are now on the Umpqua reservation two hundred and sixty six persons including all ages, thirty of whom are Klamaths or Indians from the Vicinity of Klamath Lake… (Ambrose 11/30 1855)

Between early November and December 21 1855, there is a steady growth in population at the Umpqua reservations, from surrenders, captures, and those who may have willingly gone there for safety from the vengeful white militia. 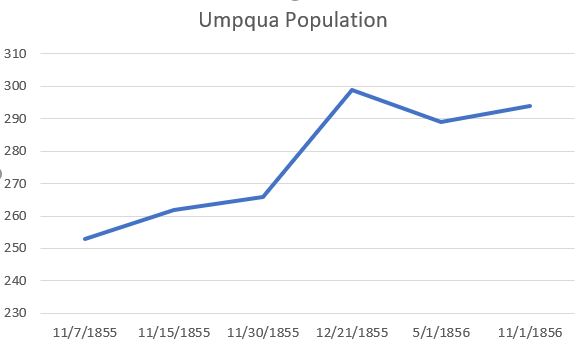 This line graph shows a gradual rise in population. The counts in May 1856 are on the Grand Ronde reservation map, and that of November 1856 is shown in the first detailed Grand Ronde census below.

Interesting is the fact that the Federal government was using this Census to prove lineage for Calapooia and Umpqua descendants in 1960. The significance of the 1960 census or roll still needs to be determined. This 1855 census may be the earliest for Oregon as I have not seen a similar census for the Table Rock Reservation as yet.

2 thoughts on “The 1855 Umpqua Reservation Census”